Gil Marks and the Holy Stomach 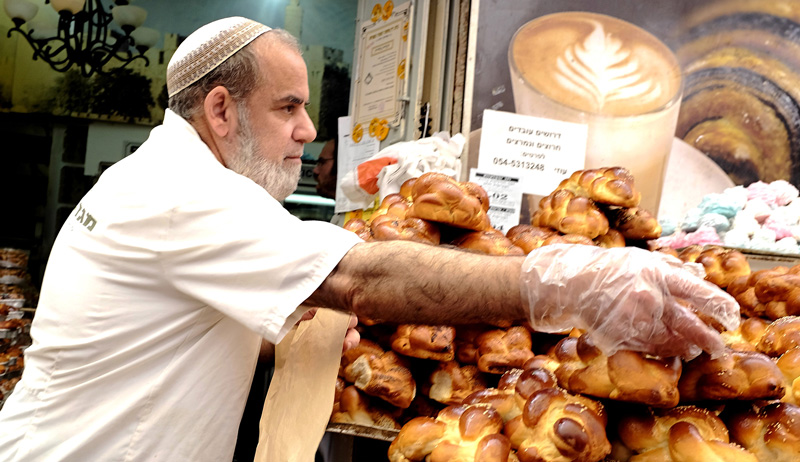 This past Sunday, Gil Marks, famed Jewish food writer, author of several acclaimed cookbooks and of the magisterial Encyclopedia of Jewish Food (2010), and an Orthodox rabbi, was laid to rest near his home in Alon Shvut, Israel. Marks has been widely and justly lauded for his sterling contributions to the field of culinary history. Yet he requires appreciation not only as a chef and a food writer but as an interpreter of Torah.

To read The Encyclopedia of Jewish Food is to encounter a smorgasbord of extraordinary insights, culinary and otherwise. Marks informs us, for example, that not until the 15th century did Ashkenazi Jews in Germany and Austria begin to apply the term hallah—which in the Bible designates only the bit of dough offered to the priest as a tithe—to their Sabbath loaves. It seems that, in those lands, Christians still perpetuated certain pre-Christian practices, one of which had been to prepare, around the time of the winter solstice, an attractively braided loaf to appease the pagan goddess Holle, an “ugly Teutonic crone with long matted hair.” In time, having replaced the pagan referent with a sacred one, Jews all over the globe, Ashkenazim and Sephardim alike, would be inaugurating their Sabbath meal with a blessing over two artfully braided loaves of “hallah.”

Marks has similarly fascinating stories to tell about other Sabbath foods. His Encyclopedia even features a cholent map, charting the historical spread and evolution of this Sabbath stew from the hamin cited in the Mishnah, to the adafina of Spain, to the slow-cooked, potato- and barley-based casserole of Ashkenaz that is relished by so many today. And his discussion of the holidays is no less enlightening. In this Hanukkah season, anyone who, like me, mourns the plummet of the potato latke from its former prominence will be amused and edified by Marks’s reconstruction of how that once-universal dish gave way, in Israel, to jelly doughnuts, known as sufganiyot. (Hint: it was all the result of a socialist plot.)

But Gil Marks’s achievement goes beyond his historical and cultural researches, his amazing expertise in the kitchen, and the many indispensable recipes he provided along the way. As he well recognized, Judaism itself is, in the phrase of the theologian Michael Wyschogrod, “a religion of the body,” and its vision of holiness is very much linked to the physical, and especially to food.

In Temple times, the central cultic ritual was the assembly of the entire people three times a year in Jerusalem, where, the Bible constantly exhorts, “Ye shall eat there before the Lord your God.” Rabbi Joseph Soloveitchik noted just how shocking this idea must have been to the ancient Greeks. To the Greek mind, he wrote, “an animal eats, while man thinks and recognizes the spiritual.” But Judaism, then and now, insists on the sacred value of dining before the divine:

Eating sacrifices, eating the paschal lamb, eating the second tithe, . . . eating matzah, eating the offerings of joy on the three festivals—all of these are biblical commandments . . . whereas prayer [by contrast] is counted among the commandments only according to Maimonides. The mitzvah of rejoicing on the festivals in the Temple is focused on eating sacrificial meat, and in our time on eating regular meat and drinking wine, and this is considered the rejoicing of man before his Creator.

In his essays and his books, Gil Marks reminded us that to misunderstand food is to misunderstand faith. Take Passover and its laws, which are all about bread. According to the book of Exodus, two substances were forbidden to the Israelites in remembrance of their liberation from Egypt: hametz, or leavened bread, and se’or, which is commonly translated as yeast. To Marks, the translation is a mistranslation, and a ludicrous one; after all, another central ritual at the seder is the drinking of wine, which itself is created by the action of yeast. Se’or, he states flatly, is “one of the most mistranslated words in the entire Bible.”

In fact, se’or refers to a basic element of baking known to all before the modern age: starter dough. First invented in Egypt, this carefully nurtured mixture of flour and water contained a natural culture of yeast and bacteria: an imperishable leavening agent. For most of the history of the West, starter dough was one of a household’s most treasured possessions; to this day, European chefs utilize starters that are several centuries old. To ask the Israelites to rid themselves of se’or—one of ancient Egypt’s breakthrough innovations—and to command that their descendants replicate the deed throughout the generations, was to ask an extraordinary yearly sacrifice in token of their faith.

But the Jewish approach to food—and to the material world in general—may be best captured in examples not of deprivation but of affirmation. I’m particularly enamored of an anecdote about Rabbi Baruch Ber Leibowitz (1870-1939), a devoted student of Rabbi Hayyim of Brisk and later the leader of a yeshiva in Slobodka, Lithuania. Once a townsman brought Rabbi Leibowitz a chicken’s stomach in which a needle had been found. Because a hole in the stomach—the kurkevan, in the parlance of the Talmud—renders a chicken unkosher, this is a problem discussed at length in Jewish law. Having spent his entire life in such study, the revered rabbi knew a great deal about a chicken’s stomach but—unlike any shtetl housewife of his day—had never actually seen one. According to the tale, he grabbed the bloody, pulpy mass, held it close, and joyously exclaimed, “So this is the holy stomach on which so much Torah has been written!” (“Ah, dos iz di heylige kurkevan!”)

Judaism, contra Plato, denies that this is a world of material shadow that the enlightened must escape. Similarly, to be a religious Jew is to reject the Christian assertion that “My kingdom is not of this earth.” On the contrary: Jews insist that in sanctifying the physical, they enable the presence of God to reside in this world. As Rabbi Soloveitchik put it: “The universal homo religiosus proclaims: the lower yearns for the higher. But halakhic man, with his unique mode of understanding, declares: the higher longs and pines for the lower.”

Gefilte fish, matzah, cholent, and so many other culinary concoctions—lowly substances, all—are, in their own way, foods of faith, and eating them, with the proper perspective, allows our tables to be dwelling-places of the divine. This is what Gil Marks showed, over and over again, and it is for this that he will be sorely missed—even as his impact on my eating, and on that of countless others, will endure for many courses to come.

Gil Marks and the Holy Stomach