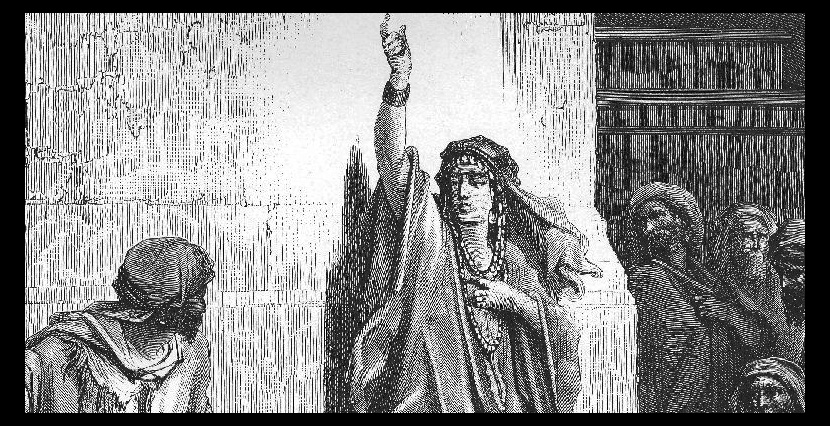 An engraving of Deborah by the French artist Gustave Doré. Wikiart.

Most epics involve heroic men leaving women to pursue adventure, victory, and conquest. Odysseus leaves his wife Penelope and the enchantress Circe, Aeneas leaves Dido, Homer’s Iliad is set in motion first by the theft of a woman, Helen, and then by an argument over the female spoils of war that erupts between the warlord Agamemnon and his mercenary Achilles, the poem’s hero.

But what does any of this have to do with Torah? It has to do with the haftarah for this week’s portion of Beshalah (Exodus 13:17 – 17:16), which concerns the military exploits of the prophetess Deborah. The story appears in the biblical book of Judges, a peculiar work that I often think of as a collection of absurdist parables. But this particular reading (Judges 4:4 – 5:31) is different. It strikes me as a mock-epic, and it never ceases to amaze me with its command of that form—and with its fine savagery.

The climax of the Iliad, the greatest heroic story ever told, is the confrontation between Achilles and the opposing general Hector. Having finally tracked him down, Achilles pursues Hector in Homeric lines thrillingly translated by Christopher Logue:

And Achilles went for him, fast, sure of his speed
as the wild mountain hawk, the quickest thing on wings,
launching smoothly, swooping down on a cringing dove
and the dove flits out from under, the hawk screaming
over the quarry, plunging over and over, his fury
driving him down to beak and tear his kill—

And then, in the translation by Robert Fitzgerald,

The two men ran, pursuer and pursued
And he who fled was noble, he behind
A greater man by far. They ran full speed
And not for bull’s hide or a ritual beast
Or any prize that men compete for: no,
But for the life of Hector, tamer of horses.

That’s the sort of story—a story about men in battle, and about horses—that we have reason to think we’re going to be getting here in the book of Judges. But not this time:

And Deborah was a prophet woman,
A woman who fired the torches,
She judged over Israel at that time:
And she sat under a date tree, Deborah,
From the heights to Beit El at Mount Ephraim
And the children of Israel went up to her for judgment.

And she sent and called for Barak son of Avinoam
From Kedesh in Naftali and said to him,
Did not the Lord God of Israel command,
Go and draw men from Mount Tabor
And take with you ten-thousand men
From the sons of Naftali and sons of Zebulun?
And I will draw for you to the river Kishon
Sisrah, the warlord of Yavin, and his chariots
With his multitude and put him in the palm of your hand.

And Barak said to her, If you go with me I’ll go
And if you don’t go with me I won’t go.
And she said, Go I shall indeed go with you
But your fame will not be found on the path you’re set on,
For in a woman’s hand the Lord will deliver Sisrah.
And Deborah rose and went with Barak to Kedesh
And Barak called up Zebulun and Naftali at Kedesh
And he went up with ten-thousand men at his heels
And Deborah went up with him.

This haftarah plays with your expectations by carrying on about Barak and his ten-thousand men. True, you’re told upfront that this is an odd sort of epic: the prophet is a woman, and the hero whom she summons hasn’t the guts to make a move without her. And then she tells him that a woman will be the one who does in Sisrah, which makes you think Deborah herself, who’s leading the action, will be the vanquisher. In  just a few lines we’ll be in the heat of battle, but first there’s a lull as the focus returns to Barak and his ten-thousand men, whom he marches up the hill and promptly marches down again (rather like the Grand Old Duke of York in the nursery rhyme). Finally the battle starts and—surprise—this isn’t a war story after all:

And they told Sisrah that Barak son of Avinoam had gone up to Mount Tabor:
And Sisrah called up all his infantry,
nine-hundred steel chariots,
And all the people who were with him from Haroshet Goyim
To the river Kishon. And Deborah said to Barak, now rise
For this is the day the Lord has put Sisrah in your hand
Will not the Lord go out before you!

And Barak came down from Mount Tabor
With ten-thousand men behind him,
And God stampeded Sisrah and all his chariots and all his camp
At sword point before Barak
And Sisrah got down off his chariot and fled on foot.
And Barak chased after the chariots and the camp up to Haroshet Hagoyim
And the entire camp of Sisrah fell at sword point, there was not a single one left.

Who’s doing the fighting here isn’t Barak; it’s the Lord, and the fight is over before you know it. Bang! The mighty host is routed and wiped out to the last man. Sisrah is fleeing, and Barak is after him, and now we devotees of the epic are waiting for the climax, the heroic confrontation, Achilles and Hector, the sweaty clinch as two superwarriors go at it mano a mano. Instead, as befits a mock-epic, we have a war waged by women against women.

And Yael went out to face Sisrah
And said to him, Turn my lord, turn to my house, don’t be afraid
And he turned to her into the tent
And she covered him with a blanket.
And he said to her, Please let me drink
A little water, for I’ve been thirsty,
And she opened the sack of milk
And let him drink and covered him over.
And he said to her, Stand at the tent opening
And should a man come and ask you, saying, Is anyone there?
You can say there is no one.

And Yael the wife of Haver took the tent peg
And put the hammer in her hand
And she came to him softly
And stuck the peg in his brow
Till it went through to the ground,
And he’d been dozing and weary and he died.
And here Barak was chasing after Sisrah
And Yael came out to face him
And she said to him, Go
and I’ll show you the man you seek.
And he came to her and here was Sisrah
Dropped dead with the peg in his brow

Deborah has called up the charge. Sisrah in his abject flight has stumbled across the tent of Yael who, echoing Abraham’s words to the angels in Genesis (18:2-5) and acting the perfect hostess, not to mention a wicked witch in a fairy tale, entreats him to come inside. He asks for water and she gives him milk—which, the rabbis note in their commentary, is a soporific and which to my ear has a maternal ring; she gives him a glass of milk and covers him up, as if putting a baby to sleep. You can almost see her switching off the nightlight as she creeps out of the room. Then she’s back with the tent peg—has there ever been a phallic object less heroic?—and she puts it through his brow so far that it goes into the ground.

What I always find at once the most barbaric and most refined touch is the song at the end, which moves from praising the heroic glories of the Lord, to Sisrah’s dramatic encounter with Yael,  to the homely details of a domestic scene in which Sisrah’s mother is depicted waiting impatiently for her son’s triumphal return from battle.

Blessed of all women be Yael
Wife of Haver the Kenite,
Blessed of all women of the tent:
He asked for water, she gave him milk,
In the cup for great guests she offered him cream.
Her hand to the tent peg she reached
And her right hand to the workman’s blow
And battered Sisrah, wiped out his head,
And crushed and went through his brow.
Between her legs he knelt and fell
Where he knelt, there he fell, lost.

Through the window spying and wailing
Sisrah’s mother at the lintel,
Why does his chariot dally and not come,
Why does the rattle of his chariots tarry?
The wisest of her ladies will console
And even she repeats what they prattle.
For will they not find and divide spoils,
A maidenhead or two for each fellow?
The trove of the colors shall go to Sisrah
The trove of colors that are embroidered,
Colors embroidered on both sides for their necks in spoils.

So shall all your foes be lost, Lord,
And His adorers as the sun coming out in full force.
And the land was quiet for forty years.

This song, sung by Deborah herself, is the triumphant cry of one woman over another. You think your son is sharing our daughters with his men, you think he’s getting the best of our needlework? Think again, honey! And then, from the wrenching close-up of Sisrah’s mother and her ladies-in-waiting, fantasizing about Sisrah’s expected haul of pretty baubles, the song abruptly shifts register, the camera pulls back, and we’re given a panoramic shot of the Lord’s armies rising like the sun itself.

I always look forward to this haftarah, and I always find it stomach-churning. David rejoicing over the fall of Goliath is as nothing compared with Deborah exalting Yael and jeering at Sisrah’s mother. Besides, when David beheads the giant Goliath, you take comfort in the victory of a lean and ascetic youth armed only with his slingshot over the gargantuan and heavily armored professional warrior. Where in this story is the moral uplift? The Lord doesn’t need armies, He doesn’t need swords, He doesn’t even need Jews. If He’s decided against you, He’ll find some friendly lady of another tribe to offer you a drink of water, and while you’re wiping the milk from your upper lip, there’ll be a tiny pain at your temple and so long, Achilles.

And there’s just the point. As this mock-epic shows most graphically, the Lord of hosts doesn’t need heroes. And a horse, as Psalm 33 puts it, is a vain thing for deliverance. That is the moral of this tale: it’s not about the horses. Deborah knows that, Barak does not. That’s why Jewish girls are named after her, and Jewish boys are named after prophets, not warriors.