On the Interpretation of Kebabchik

After a friend comes to him with a strange dream, Philologos wonders if the unconscious mind can do Hebrew numerology. 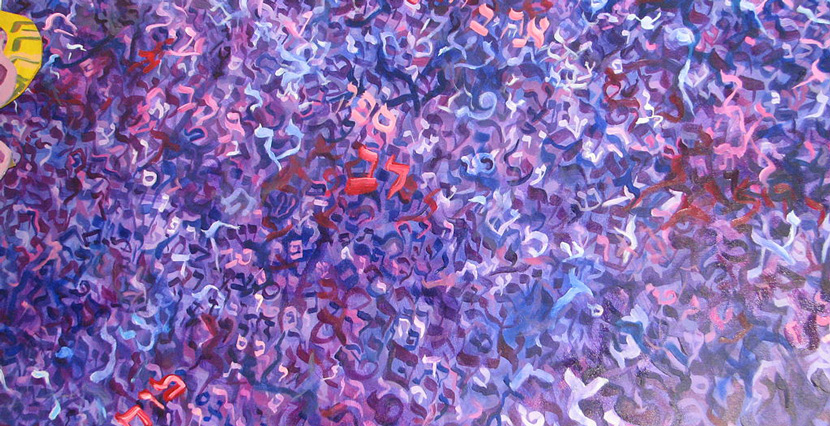 A painting of Hebrew letters by the Israeli painter David Rakia. Wikipedia

Ever since Freud’s pioneering investigation of dreams, we have known how capable the unconscious mind is of puns, complex verbal allusions, and intricate word play. But can dreams also put this ability to use in performing arithmetical calculations that most of us would have difficulty doing in our heads when awake? As one says in Yiddish, hert a mayse: Listen to a story.

I was chatting not long ago with an American-born friend living in Israel. “You know,” he said, “I had a dream last night that I can’t make any sense of. In it, I’m reading a memoir by an American author who describes a course he took in college with a famous professor. Now and then, he writes, this professor would interrupt the class he was teaching and say, ‘Let’s kebabchik.’ That meant something like, ‘Let’s just enjoy ourselves now.’ That was my whole dream—or at least as much of it as I remember.”

“Yes. I have no idea where that came from.”

“Did you have any association with kebab, either as a word or a food, when you awoke?” I asked. “Do you have any now?”

“No,” said my friend. “None at all.  I’ve eaten kebab like everyone, but it has no special meaning for me. The only thing to come to mind when I awoke was the word ‘jitterbug,’ but don’t ask me what that has to do with it.”

I didn’t, and my friend soon turned to another subject that was preoccupying him more than his dream. He owned, he told me, a piece of land that a building contractor had approached him about buying. Although they hadn’t discussed price yet, he thought he might ask 1,200,000 shekels, from which the contractor would try to bargain him down. But though he and his family could certainly use the money, the capital-gains tax, which in this case a real-estate lawyer had estimated at about 39 percent, would gradually drop the longer he held on to the property, so that he wasn’t sure whether to sell now or to wait. It was a dilemma.

I had no particular advice to give him, and after we parted, my mind reverted to his dream. “Kebabchik?” “Jitterbug?” The two words had nothing in common. No, wait: they both had three syllables. Not only that, but if you took the last syllable of “kebabchik” and made it the first one, you got “chikkebab.” That had some of the sounds and the rhythm of “jitterbug” (and jitterbugging was all about rhythm!) and was close to “shish kebab.” And “shish” suggested shesh, Hebrew for “six.”Was I getting somewhere?

It was then that I thought of a dream that an uncle of mine, a Hebrew poet, had told me about many years ago. He had dreamed, at a time in his life when he was feeling weary and depressed, of receiving an envelope from his bank in which was a bounced check for $28.00. “Twenty-eight?” he said to me. “Don’t you get it?” I confessed that I didn’t. “That’s koah in gematria. The dream was telling me I have no strength.”

Fine: my uncle was a Hebrew poet and dreamed in gematriot. But what reason was there to think my friend did, too?

Still, I decided to give it a try. Suppose “kababchik” was “shish kebab” and “shish kebab” was “sixkebab.” What did that come to?

I wasn’t ready to surrender, though, There was another way of doing it. Although it wasn’t the traditional way of figuring gematriot, it was possible to think of the 100 and two 2’s of Hebrew kebab as 122 rather than 104. And six times 122 was 732.

732? I had just calculated that 732,000 shekels would be my friend’s share of the sale after taxes! Could I be making a mistake? I did the arithmetic again: no, it was correct.

A coincidence? But how could it possibly be a coincidence that of all the numbers in the world, my friend’s projected income would be exactly equal to six times the gematria of Hebrew kebab?

I phoned him. “For what it’s worth,” I said, “your dream was telling you to sell your land. Not only that, it was saying, ‘Take the money and enjoy it with your family now, because who knows what will happen later?’ That’s the meaning of ‘Let’s kebabchik.'”

Since then I haven’t spoken to him and don’t know what he’s decided. But if you think it’s impossible that a sleeping mind could do all that, you’re welcome to suggest a better interpretation of his dream.

On the Interpretation of Kebabchik