What Do the Attacks in France Mean for the Survival of Liberal Democracy?

The liberal way of life is remarkably fragile. Is the West willing to fight for it? 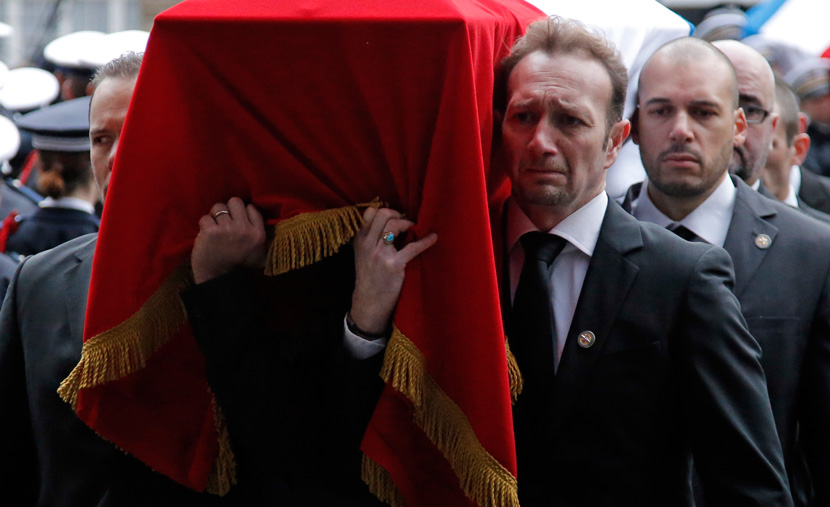 Mourners carry the coffin of Franck Brinsolaro, one of two French police officers killed in the attack on Charlie Hebdo. AP Photo/Francois Mori.

Observation
Simon Gordon
About the author


Simon Gordon, a former Tikvah Fellow, is a policy adviser at the embassy of Israel in London. The views expressed here are his own.

Last week, the cartoonists of Charlie Hebdo were not the only journalists targeted for affronting Muslim doctrine. Raif Badawi, founder of the Free Saudi Liberals website, who was convicted of blasphemy by a Saudi court in 2012 and later resentenced, more harshly, to ten years’ imprisonment, a fine of 1 million riyals, and 1,000 lashes, received his first flogging two days after the massacre in Paris. Although the Saudi regime joined the worldwide condemnation of the attack on Charlie Hebdo, the French cartoonists wouldn’t have fared much better had they made the Gulf state their publishing base. The only difference was the lack of official imprimatur on their execution: they were murdered by Islamist vigilantes, not an Islamist judiciary.

What Do the Attacks in France Mean for the Survival of Liberal Democracy?