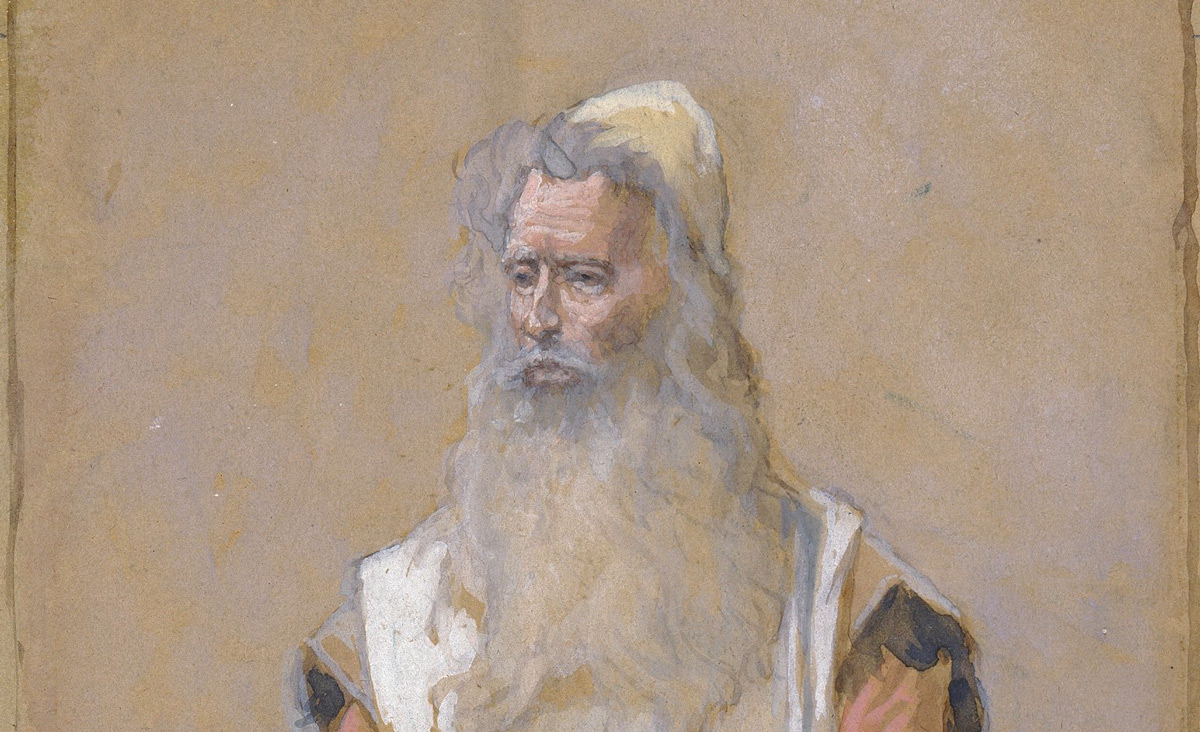 This week’s Torah reading of Re’eh (Deuteronomy 11:26 – 16:17) covers a vast swath of time, but it’s centrally devoted to the aging Moses’ effort to engineer the Jewish future. The thread running through it can be traced back to a recurring issue in Israelite life over the previous four decades in the desert—an issue codified much earlier in the book of Leviticus (17:3 – 4):

Every single man of the house of Israel
who slaughters a bull or sheep or goat, in camp or out,
and doesn’t bring it to the meeting-tent door
to sacrifice a sacrifice to the Lord before the Lord’s abode—
blood will be that man’s reckoning. He’s spilled blood,
and that man will be cut off from within his people.

The present Torah reading is loaded with dietary laws—what animals you can eat, how you can eat them, what festivals you must observe and which animals can be sacrificed and eaten on them—but the central issue remains the same, and can be summarized as the tension between family life, with all its temptations, and worship of the Lord. Not that there is any necessary contradiction between the two. The problem, instead, is idol worship, which Moses perceives as the ultimate sin lurking at the door: the sin that is liable to get the children of Israel slung out of their hard-won inheritance in the land the minute he closes his eyes and hands over their tender care to Joshua. How can he be sure everything’s not going to go wrong once he’s dead and buried?

You can witness Moses fretting obsessively about this throughout the reading: the great founding father being forced, very much against his will, to let go the reins while trying desperately to put in place some checks and balances before it’s too late. How to give people just enough room to go their own way, but not room enough to sin?

And you shall shatter their altars and crack their monuments
and burn their worshipping trees with fire
and uproot the idols of their gods
and obscure their names from that place.
That’s not how you’ll behave for the Lord your God,
for to the place the Lord your God chooses from among all your tribes
to set there His name.
His dwelling you shall seek and there you shall come
and bring there your offerings and sacrifices
and eat there before the Lord your God
and rejoice in anything to which you turn your hand,
you and your household that the Lord your God blesses you with.

Throughout those 40 long years, Moses had held on tight to the Jews because at any moment they might unwind like a coiled spring and relapse into idol worship—as they did when he’d turned his back at Mount Sinai. So throughout those 40 years there was no eating of meat in private—because eating meat means a party, and you know what happens at parties, things get out of hand and before you know it you’ve got licentiousness and a golden calf to worship. So to solve the problem of what to do when he’s gone, Moses both loosens the reins and constructs a safety net. He will allow people to eat meat in their own family groups and not at the tent of meeting, but he is still going to mandate that they show up someplace—he doesn’t know where yet—and bring there the offerings that are absolutely required to keep straight with the Lord.

Beware of raising your offerings at some place you see.
Only at the place your Lord chooses in one of your tribes,
there you’ll raise your offerings
and there you’ll do all I’m commanding you—
except that according to your appetite you can sacrifice
and eat meat as a blessing of the Lord your God who gave it you
at all your doorsteps. . . .

This solution will endure for centuries, though not without problems. What should be sacrificed, and where? King Saul, after his victory over the Amalekites, stumbles over this very problem when he and his men help themselves to animals that the Lord wanted sacrificed right on the spot. The problem is resolved, partially, by his successor David, who creates the stronghold of Jerusalem to which Moses alludes. But it was really only centuries later, in the aftermath of the destruction of the Second Temple, that the problem was finally resolved through the enactment of prayer instead of sacrifice by Rabbi Yoḥanan ben Zakkai. Or you might say that the problem was displaced from the pages of the Torah to the pages of the siddur, with the consequence that the only tension remaining today is between what prayers may be said at home and what prayers should be said with a quorum: the contemporary place where God chooses to set His name.

The Lord your God will expand your borders, as He told you
and you’ll say, “Let me eat meat” for you’ll have appetite to eat meat.
Then eat meat as your heart desires.
If it’s too far for you, the place the Lord your God chooses to set His name,
then offer up from your cattle and sheep that the Lord gave you, as I commanded you
and eat at your gates as your heart desires. . . .
Just your sacred offerings and your promised offerings you’ll bear
and bring to the place the Lord picks.

Mind you, though, that the consequences of getting it wrong and not doing what the Lord wants are most dire:

The Lord your God will cut off
the peoples you’re coming here to dispossess
and you’ll dispossess them and settle their land.
So take good care you don’t cozy up to them after they’re wiped out before you
and don’t ask after their gods saying, “How did these nations worship their gods
so I can do so, too?” Don’t do that to the Lord your God
because everything the Lord despises and hates they did for their gods
for they also burned their sons and daughters in fire to their gods.
All the matter I’m commanding you—take care you perform it.
Don’t add to it and don’t detract.
If there should rise among you a prophet or dreamer of dreams
and he should give you a sign or wonder
and this sign or wonder he told you of comes to say,
“Let’s follow other gods you’ve never known and worship them”—
Do not obey the words of that prophet or dreamer of dreams
for the Lord is trying you
to know if you are still lovers of the Lord your God.

That last phrase—are you still lovers of God?—calls to mind one of those painful, searching love songs in which the teenage wooer cries out to the (probably absent) beloved to ask if their love is still real. But unlike a teen ballad, this is deadly serious:

Follow the Lord your God,
He’s the One you should fear, His commandments keep, Him obey, Him worship, stick by Him
and that prophet or dreamer of dreams put to death
for he spoke awry of the Lord your God—
Who’s taken you out of the land of Egypt
and redeemed you from the workhouse—
in order to tempt you from the path the Lord your God commanded you to walk down;
but you’ll scour the evil from within you.

And it’s not just the false prophets whom you have to cut down like rabid dogs. Remember Whom you ultimately love! It’s not the food and it’s not the flesh, not even your own flesh and blood. It’s God.

Should your brother or step-brother or your son or daughter
Or wife that’s in your arms or friend dear as your life
Stir you in secret saying, “Let’s go worship other gods you never knew, you or your ancestors”—
whether from the gods of the nations around you,
near or far, from one end of the country to the other—
don’t consent to him, don’t listen to him, and don’t turn a blind eye
and don’t have mercy on him and don’t cover up for him
for you shall kill him dead, your hand shall be the first to put him to death
and the hand of all the people last,
and you’ll stone him with rocks till he’s dead
for seeking to tempt you from before the Lord your God
who’s taking you out of the land of Egypt and workhouse
and all Israel shall hear and see and won’t carry on acting like this evil thing within you.

Yes, idol worship is the enemy within, the creeping shadow around every corner. In this respect, when you come right down to it, there’s no difference between Jews and others. The minute a Jew becomes an idol worshipper, he’s lower than any of the other tribes within the borders of the land, with whom you can do business as long as they refrain from idol worship. If anything, the Torah is prejudiced against Jews, for whom idol worship is a capital offence whereas, outside of Israel, others can do as they wish.

But there are sweeteners for all this medicine: not only the permission to eat meat in your own house but also a waiver that releases you from constantly having to travel halfway across the country to offer up an animal in Jerusalem. Instead, Moses sets up an alternative tax system with three deadlines corresponding to the three major festivals of the year:

After all the prohibitions—of blood, of certain kinds of animals, of mixing meat and milk, of listening to the wrong friend—what it comes down to is Moses saying that somewhere, someplace, the Lord is going to fix a center of Torah, and at that place your leaders and priests will control all you rabble by seeing you regularly. Eat and drink and love the Lord your God at home, but show up three times a year and check in. The rest is up to you.