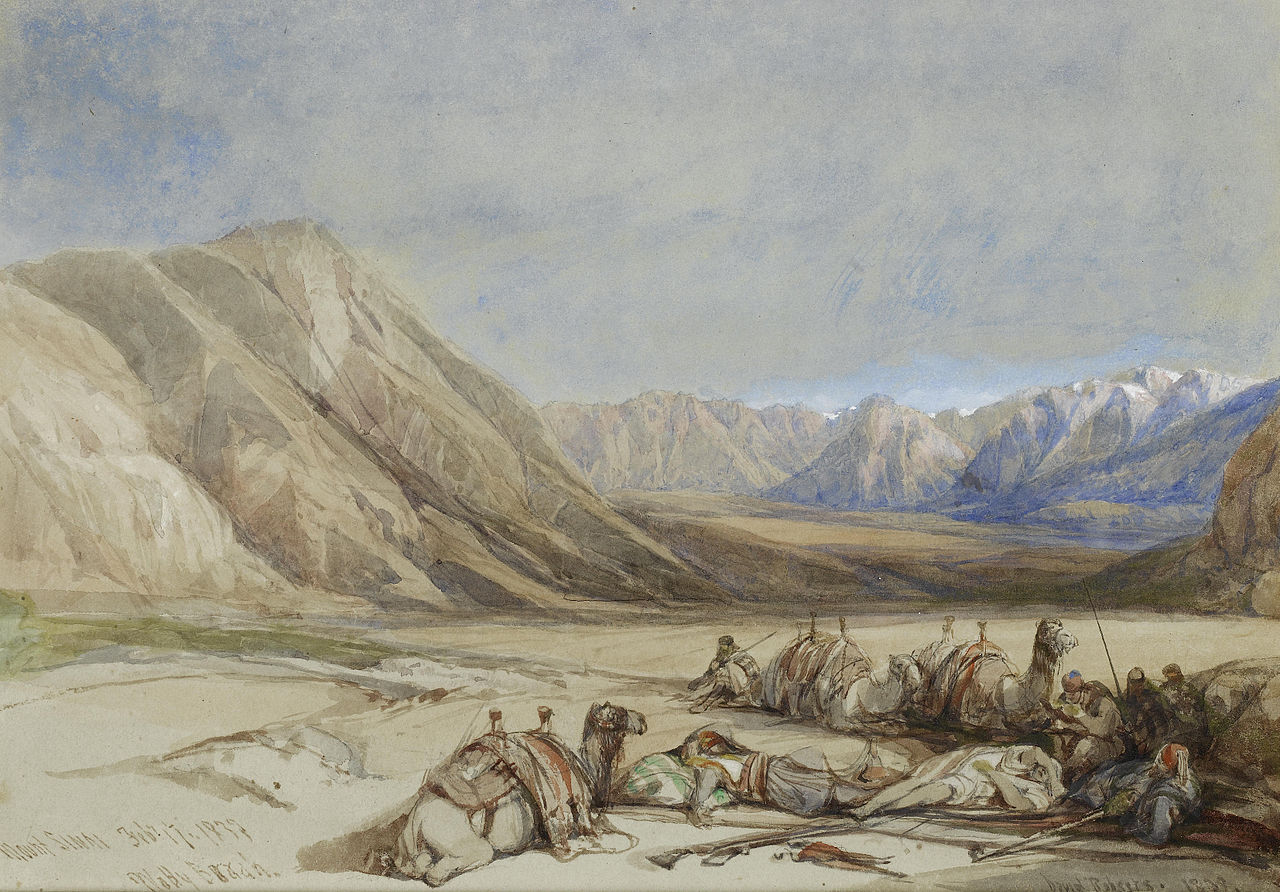 From The Approach to Mount Sinai, by David Roberts, 1839. Wikimedia.

This week’s reading of B’ḥukotai (Leviticus 26:3-27:34) catalogues the benefits and liabilities that the Almighty lays out before the Jewish people in connection with their covenant at Mount Sinai. The curious thing about the list at first glance is that the carrot occupies so many fewer verses (eleven) than the stick (31). You might get the impression that the rewards for obeying the commandments are dwarfed by the punishments for disobeying them. But even more striking is the mixture in each category of frankly physical and materialistic elements with spiritual ones. As we’ll see, the inescapable conclusion is that the two are intertwined, and indeed interdependent.

If you follow my statutes and keep my commandments and perform them,
I will bring you your rains when they’re due
And the land will yield its crop and the tree its fruit
And your threshing will overrun your grape harvest and the grape harvest overrun planting.
And you’ll eat your bread to your satisfaction
And you’ll settle securely in your land.
I will set peace in the land
And you’ll lie down with no one to terrify you. . . .
And your enemies will fall before your sword. . . .
I am the Lord your God who took you out of Egypt, from being slaves.
And broke your yokes and led you to walk upright.

Following the scene of ripened wheat and full stomachs is a reminder of something that’s not part of the reward itself, but a divine blessing. That blessing came earlier in the people’s history: you were slaves and I broke the yokes that held you by the neck and gave you the ability to walk in freedom, with heads held high.

Maimonides, in his instructions about how to teach the story of Passover to children, remarks that the simpler the child, the more abstract the explanation should be. To a simple child, you do not talk about the miracles because that can rapidly degenerate into “my Daddy is bigger than your Daddy.” Or, in this case, “My God can beat up your god.” No, you talk to the child about freedom. Because all children, however simple, understand personal freedom. Similarly, to these only recently liberated slaves the Lord shows pictures they can understand: food! But He also talks to them about freedom, its blessings and its responsibilities.

That’s the end of the blessings and the good news. Now for the responsibilities, and the really bad news:

But if you don’t obey me and don’t perform these commandments
And get tired of my statutes and sick to your stomach of My laws
Till you don’t perform all My commandments, till you breach My contract—
I in turn shall do this to you:
I’ll set over you a rush—
The ague and the fever that exhaust the eyes and empty the spirit—
And you’ll sow your seed for naught, for your enemies to eat.
I’ll turn against you
And you’ll fall before your foes
And your detractors will drive you
And you’ll flee when there’s no one in pursuit.

The opposite of freedom in this picture is not servitude; it’s actually worse. The opposite of freedom is the inability, even without a master, to be free; it’s being so terrorized that you cannot get away from what’s frightening you. The slave-driver is inside your head, wherever you go. Thus the entire world becomes scary, even when there’s nothing lurking there in the dark.

But if on top of all these you still don’t obey Me,
Then I’ll keep tormenting you sevenfold for your sins
And break your ferocious pride
And make your sky iron and your earth brass.
And your strength will be used up for naught.
Your land will not yield its harvest nor the tree of the land its fruit. . . .
And you’ll be delivered to the hands of your enemies
As I break your staff of bread
So that ten women will bake their bread in one oven
And you’ll bring back your bread made to measure
And eat but not be satisfied.

Throughout this entire passage, there is a balance between material losses (plagues and crop failures) and loss of the intangibles that make life worth living. Do the sky of iron and the earth of brass connote just a failure to plant and harvest successfully, or a devastating inability to get anything at all from the world? It’s both.

In the final verse above, which is still only the midway point of the whole harangue, spiritual terror looms again: the punishment for misbehavior isn’t just the hunger of having only a tiny ration of bread rather than the overflowing loaves you were used to, but something much more terrible. Whatever you eat, you won’t be satisfied.

I Myself will desolate the land
And your enemies who settle in it will be startled by it.
I’ll throw you scattershot among the nations
And draw My sword after you
And the land will be barren and your cities ruins. . . .
And to the remnants of you I’ll then bring
Dread to their hearts in the land of their foes
And they’ll be pursued by the sound of a falling leaf
And fly as you fly from a sword
And fall where nobody pursues.
And they will stumble over each other as before a sword, but there will be no pursuer.
You won’t stand upright before your enemies.

Here, once more, is the bottom line: the inability to stand upright, the inability to be free. It is not just a matter of losing wars, or becoming enslaved to foreigners; it’s something far more severe—an enslavement that is internal. You can get out of Egypt, but how do you get away from the degradation and the fright within?

But the remainder of you will wilt in their sins
In the lands of their enemies and even in their fathers’ wrongs they’ll wilt.
And they will confess their wrongs and their fathers’ wrongs, the cheating they cheated on Me,
And that they have gone against Me stubbornly.
I, too, have gone against them stubbornly, and brought them within the land of their foes.

In a fascinating wrinkle, the one-way prophetic rant is beginning to turn into a two-way street. Just as the people’s offenses against the Lord have caused Him to turn against and punish them, so their repentance and admission of wrongdoing will prompt Him to trust them again and to renew the old mutual promise at Sinai that, as we saw at the end of the list of blessings, seals their underlying bond. But only after a while, and after a real change of heart; the renewal of trust won’t come easy.

Or then their sealed hearts will yield
And they’ll acquit their wrong.
Then I’ll remember for them
My initial contract with those I took out of Egypt
In full sight of the nations, to be their God. I am the Lord.

The catalogue of liabilities reminds me of the small print in the credit-card contract from your issuing bank where the bank asserts its right to take money out of your account if you don’t pay your monthly bill, and, if the money isn’t there, to hold you permanently liable for it. The vision is one of spiritual bankruptcy. Not only can’t you return to Egypt if you stray and abandon the Lord, but there will be no secure place for you upon the face of the earth. Or as the poet Francis Thompson put it, “Naught shelters thee, who will not shelter Me.”

Still, as dire as the consequences are, there’s that hope of redemption: in the end, a genuine repentance will cause God to remember His part of the bargain and bring the Jews back from exile, internal as well as external. The flipside of the spiritual punishments is that they are meant to achieve results: those obstinate Jewish hearts will finally be made to yield.

Both parts of this prophecy have been fulfilled, over and over again, at different stages of the Jewish people’s tumultuous love affair with the Lord.