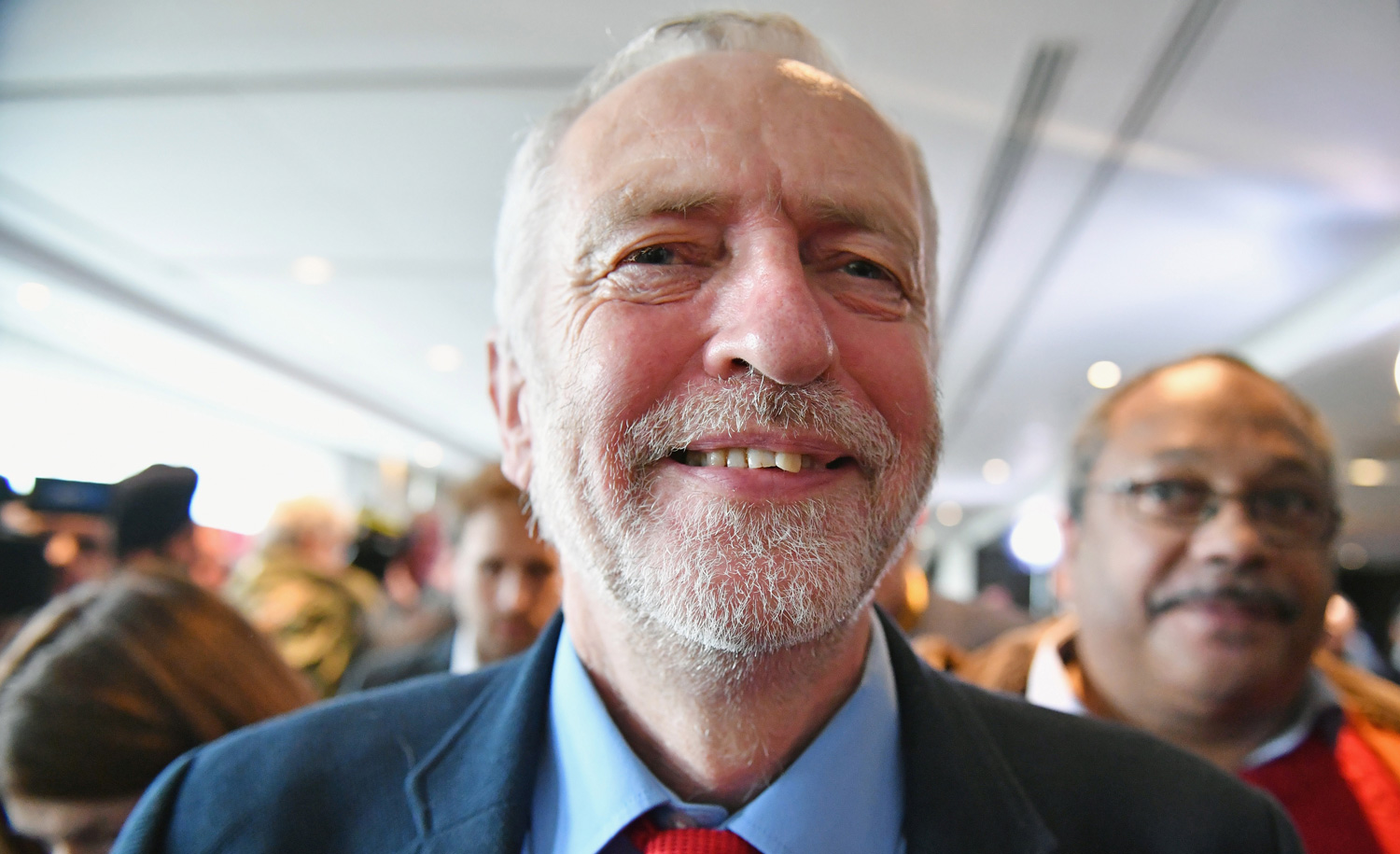 British politics, and British Jewry in particular, received a shock in 2015 when Jeremy Corbyn won the contest to become leader of the Labor party, a position he retains despite a dramatic attempt to oust him this past September—a so-called coup that turned out to be a total bust. It was a noble effort, to be sure, by the center-left establishment to rid itself of the unreconstructed old-style socialist representing what everyone thought to be the party’s far-left fringe, thankfully long suppressed. This time, however, Corbyn not only won but was reconfirmed in power with a greater majority. As for British Jews, who for some time have been feeling uncomfortable about the direction in which Labor has been headed, this re-election does nothing to halt their gradual drift toward voting Conservative.

It bears repeating that Corbyn ought not be considered an anti-Semite himself. But the larger issue is that he comes from, and is the figurehead of, a wing of British politics that, if not anti-Semitic, has embraced an otherwise indistinguishable anti-Zionism that has begun to seep into the Labor party as a whole. This is an enterprise in which Corbyn has been engaged for decades.

Consider: Corbyn was there throughout the 1980s, sponsoring and supporting the Labor Movement Campaign for Palestine, whose objective was to “eradicate Zionism” from the party. He was there in March 2001, opposing a law that would have banned membership in or support of foreign terrorist organizations, including Palestinian Islamic Jihad. He was there in April 2002 at a demonstration for Palestine where Hizballah flags were in abundance and some marchers dressed as suicide bombers. He was there in December 2003, at the second Cairo Anti-War Conference, whose declaration stated that the American campaign in Iraq was part of a Zionist plot to establish a Jewish state from the Nile to the Euphrates. He was there in 2009, calling Hizballah and Hamas his “friends” and in the same year, after visiting Syria and meeting with Bashar al-Assad, writing that “the Israeli tail wags the U.S. dog.”

Today, repellent as all this is, even worse has been issuing from the mouths of Labor members hanging on their leader’s coattails. Indeed, when Corbyn finally gave in to pressure and launched an official inquiry into anti-Semitism in the party’s ranks, the resulting report put on display a complete inability to recognize anti-Semitism when confronted with it. At the press conference accompanying the report’s release, Corbyn himself compared Israel to Islamic State, and one of his allies berated a Jewish parliamentarian to the point of tears. Now the British parliament has launched its own investigation into Corbyn’s dirty dealings with Shami Chakrabarti, the ostensibly independent head of the official inquiry, for whom he secured a seat in the House of Lords.

In short, as Dave Rich notes in his measured yet damning new study, The Left’s Jewish Problem: Jeremy Corbyn, Israel, and Anti-Semitism, a disease that “was once on the fringes of the left has now been placed front and center stage in British politics.”

In The Left’s Jewish Problem, Rich, an associate research fellow at the University of London, gives a careful and detailed account of the history that has led to the most recent headlines. He begins before the Six-Day War in 1967. Then, he writes, things were very different: “generally speaking the ties between the Labor party and Israel remained overwhelmingly friendly and supportive.” In subsequent decades as well, it could still be said that warm relations persisted. Both Tony Blair and Gordon Brown were reliably pro-Israel, and even Ed Miliband, who was lukewarm at best on Israel and always uncomfortable when Zionism came up in conversation, paid the country a visit.

But change had also been afoot for quite some time. As early as 1967 and 1968, the left was rupturing over international affairs. Specifically, in Rich’s recounting, the emergence of the radical New Left “played a decisive role in flipping left-wing opinion” on Israel. Anti-capitalist, anti-colonial, and anti-Western, the New Left encompassed an array of single-issue pressure groups and tendencies, some sympathetic to the Non-Aligned Movement, others closer to Soviet Communism. The British far left not only came to embrace the Palestinian national cause but, militant and confrontational, also began to take on that cause’s anti-Semitic character.

In its virulent opposition to Israel, the New Left could draw on several sources. One of them was Marxist theory, which (as Rich puts it) had never made its peace “with the idea that Jews form a nation or that Zionism is an authentic movement of national liberation.” Another, more immediate influence was Soviet anti-Zionism, which grew with renewed strength and insidiousness after 1967. Seen through the now-fashionable lens of anti-colonialism, Zionism became “a European colonial movement” and Israel “a bastion of white European settlers rather than a legitimate nation-state in its own right.”

Above all, leftist activism was shaped by the anti-apartheid movement. In the 1980s, Rich writes, “left-wing anti-Zionism grew from the very same networks and activist groups that were campaigning against apartheid”; today’s boycott, divest, and sanction (BDS) movement is modeled directly on the boycotts of South Africa.

Riding on the back of anti-apartheid, anti-Zionism soon became the lasting and perhaps defining cause of the New Left, and from there entered the broader political conversation in Britain. Activists emerged from small groups of radicals to organize pro-Palestinian newspapers and publicity campaigns, funded by Arab governments. Student movements, buoyed by the UN’s notorious 1975 “Zionism is racism” resolution, began to campaign against Israel on British campuses, where their actions often succeeded in restricting or banning the activities of Jewish student groups.

Just at the time the Holocaust was becoming a universal symbol of evil and inhumanity, the anti-colonialism of the New Left turned it into a cudgel with which to beat Jews, proclaiming it particularly horrific that Jews—who more than anyone should have learned the “lessons” of the Shoah—were now visiting upon the Palestinians what was done unto them by the Nazis in Europe. Thus, in the name of anti-racism, did Jews become the victims of anti-Jewish racism.

Finally, with the second intifada in Israel and the September 11 attacks on the U.S. came the birth of a new anti-war movement and the far left’s alliance with Islamism. In the furtherance of this unlikely new cause, leftists proved all too willing to turn a blind eye to the regressive values of their putative allies, who used religious rather than anti-colonial rhetoric to justify hatred of Israel. Islamist politics in Britain, Rich notes, was awash with “support for terrorism, anti-Semitism, and religious bigotry.” But no matter: to the British left, Hamas, Hizballah, and homegrown Islamist groups were to be a new proletarian revolutionary movement, at one with British leftists in their war against Zionism and the West.

Following the various strands of Rich’s narrative—through the internecine struggles between the International Socialists and the International Marxist Group, or between the Young Liberals and the Revolutionary Socialists Students’ Federation—can be as dizzying and obscure as reading about the War of the Roses. Some readers may wish to skim. But for those with the time and inclination, wading through the details is well worth the struggle, for they constitute a compelling case for Rich’s final diagnosis:

Since the 1960s, the idea has spread across the left that Zionism is a racist ideology and that Israel is a Western colonial implant in the Middle East. It is a short step from this to the idea that Israel should not exist and that its supporters in the West are racists. This New Left view that Israel and Zionism are illegitimate form a modern bridge to older Marxist theories that Jews are not an authentic people and should, as history progresses, disappear entirely.

The emotional, historic, and spiritual Jewish connection to Israel was at first ignored by this way of thinking and then later was taken as evidence that Jews are complicit in Israel’s alleged crimes. Conspiracy theories about Jewish, or Zionist, wealth, power, and influence emerged from Soviet propaganda and have become worryingly common in the post- 9/11 left.

The Holocaust is either denigrated or turned against Israel via the most grotesque and offensive historical distinctions. At the same time, a type of anti-racist politics has developed that is blind to anti-Semitism if it doesn’t come from the far right, and that sees Jews as part of the powerful, wealthy establishment in Western societies.

This is a bold statement, but one that is hard to deny.

Indeed, given the preponderance of damning evidence he brings to bear, it’s quite impressive that Rich has written not a vigorous polemic but a carefully considered study. He is attuned to fine distinctions, and makes a point of the fact that anti-Zionist mania does not go altogether unchallenged on the left today. In concluding, he even makes a number of suggestions aimed at those on the left who might listen. These include, on the one hand, eliminating conspiratorial talk, anti-Semitic canards, and offensive Holocaust analogies and, on the other hand, thinking more deeply about anti-Semitism as “both a form of racism and a prejudice with its own specific characteristics.”

Is that enough? Unfortunately not. What Rich doesn’t quite get at is that as long as the New Left remains wedded to anti-colonialism and an anti-racist theory that denies that Jews can be the victims of racism or that they have the right to define anti-Semitism in their own terms, anti-Zionism and anti-Semitism will persist. Without breaking from the narrow categories of colonizer and colonized, interloper and indigenous, oppressor and opposed, the far left will never get over its Jewish problem. But to drop that framework would mean sacrificing a cherished core tenet.

In the immediate term, then, there are no prospects of even incremental change. The hard left is firmly in control of Labor. Jeremy Corbyn hasn’t had an original idea, or altered his thinking on any subject, since he first entered politics in the 1970s—and shows no signs of changing his views on Israel or severing his connections with anti-Semites. Removing him and his faction from power will now have to wait until after a general election, which might not come until 2020. Until then, and perhaps even afterward, Labor’s relations with British Jews will only get worse, and the party’s march toward electoral oblivion will proceed unimpeded.