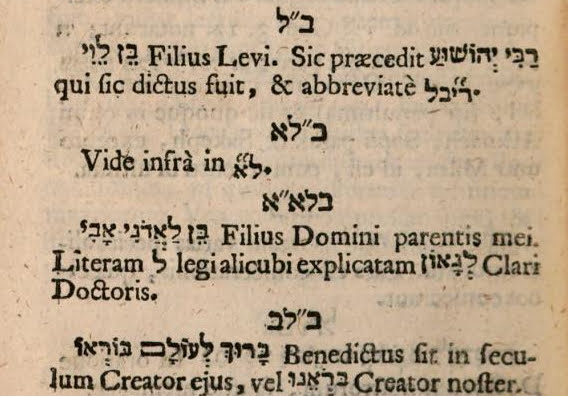 I know that acronyms are rarely used in Semitic languages like Arabic and are not present in biblical Hebrew. The Talmud, which is mostly written in Judeo-Aramaic, contains some mnemonics to help remember various facts. These do not seem to be true acronyms as are, for instance, the names of famous medieval rabbis like Rashi [Rabbi Shlomo Yitsḥaki] or Rambam [Rabbi Moshe ben Maimon]. When did acronyms start being used in Hebrew? Was their introduction the result of an influence from European languages?

In talking about acronyms—that is, abbreviations generally composed out of the initial letters of the components of names or phrases—we need to distinguish among three different types. In the first type, these initial letters are verbalized as the phrase or name for which they stand. When, for example, we see “etc.” written on a page, we say or read it not as “ets” but as “et cetera” (Latin for “and the rest”). “Etc.” is thus simply a shorthand notation. And this, as we shall see, is how acronyms originated in ancient Latin and Greek.

In the second type of acronym, we verbalize the names of the letters. We say “eye-ee” (i.e.), not “id est,” “ay-tee-and-tee” (ATT), not “American Telephone and Telegraph,” “jay-ef-kay” (JFK) not “John Fitzgerald Kennedy.” In English, this is by far the most common form of acronym, though in the last century it has had to compete with the third and historically more recent type in which the letters combine to yield a new word. Thus, “Absent without leave” becomes “Awol,” “North Atlantic Treaty Organization” becomes “Nato,” and “Auto-immune deficiency syndrome” becomes “Aids.” Some organizations have been deliberately named to create such catchy acronyms. The “Cooperative for American Relief Everywhere,” founded in 1945, would never have been named so strangely did not its first letters spell CARE, which is how it came to be known.

Medieval and modern Hebrew are unusually rich in acronyms, known as rashey teyvot or “initials.” They are rich, however, in a manner that is the reverse of English. Type 2 acronyms (JFK and the like) are rare. Types 1 and the 3 are the rule, the former more in pre-modern Hebrew, the latter in modern and, especially, contemporary Israeli Hebrew. Sometimes, the same acronym has made the transition from 1 to 3.

In rabbinic language, for example, the acronym mem-vav-tsadi-shin, מוצ”ש, is always verbalized as motsa’ei shabbat, “the outgoing of the Sabbath”—that is, Saturday night. Among Israelis, by contrast, and particularly younger ones, one often hears this as motsash. (The diacritic resembling a quotation mark in מוצ”ש is the cantillation mark known as a gershayim and always appears before the last letter of a Hebrew acronym to indicate that this is what it is.)

But to get to Brian Kaye’s question: how far back do Hebrew acronyms go? As he observes, they certainly do not exist in the Bible, and although they are mentioned at length in one place in the Talmud, this passage makes it clear that they were neither indigenous to Hebrew nor much used, if at all, in the talmudic period.

The passage referred to by Mr. Kaye is found in the tractate of Shabbat, and there an acronym is called not rashey teyvot, as it later was, but notarikon, a word borrowed from Greek notarikhon, which in turn comes from Latin notarius, an amanuensis or stenographer. Rather than containing any real acronyms, the passage in Shabbat lists a number of imaginary ones in the form of biblical words given fanciful acronymic interpretations. Thus, Rabbi Natan explicates the verb yarat, whose meaning is unclear because it occurs only once in the Bible—namely, in the story of Balaam’s she-ass that balked at an invisible angel in its way—as an acronym of yar’ah, ra’atah, natetah, “She feared, she saw, she turned aside.”

Clearly, then, acronyms were first developed by ancient Greek and Latin stenographers and, though known to the rabbis of the Talmud, adopted by Hebrew only in a subsequent age. The fact that they are found in abundance in ancient midrashic texts like Genesis Rabbah, whose composition is contemporaneous with the Talmud’s, does not prove otherwise. In the very first paragraph of the standard edition of Genesis Rabbah, we have heh-mem-daled-alef for Aramaic hekh mah d’at amar, “Even as you read [in Scripture]”; daled-alef for davar aḥer, “Something else [can be said on the subject]”; bet-vav for basar v’dam, “flesh and blood,” in the expression melekh basar v’dam, “a king of flesh and blood,” i.e., a mortal ruler; heh-kuf-bet-heh for hakadosh barukh hu, “the Holy One Blessed Be He”; and alef-vav-heh for umot ha-olam, “the peoples of the world,” i.e., “Gentiles.”

Modern standard editions of the Talmud use such acronyms, too—such as tav-resh for tanu rabanan, “the rabbis taught”—but far fewer. This is because the Talmud was considered a sacred book by Jewish tradition, while the books of the Midrash had a lesser though still honored status. The same medieval scribe, therefore, who would have been reluctant to tamper with a talmudic text by using shorthand notations for some of its words had no such inhibitions when it came to a midrashic text.

It was especially in late-medieval times that such notations came to proliferate in rabbinic writing, to the point, indeed, that there sometimes seem to be more of them than ordinary words. One has to be steeped in such literature, or have access to specialized lexicons, in order to understand the passages in which these acronyms occur. Here are a few sample lines, chosen more or less at random from Nitsotey Orot, “Sparks of Light,” a kabbalistic commentary on the Zohar by Rabbi Ḥayyim Yosef David Azulai (1724-1826), himself known by the acronym of “the Ḥida.” In explaining a reference in the Zohar to the angel Metatron, whose name he connected with the Aramaic verb tamar, to hide or be concealed, Azulai wrote:

[What] is concealed are ḥet-gimmel-taf-mem [the kabbalistic spheres of Ḥesed, G’vurah, Tiferet, and Malkhut] and what is revealed are gimmel-reysh-nun-ḥet [guf, ruaḥ, n’shamah, ḥayah, the body, the spirit, the lower soul, and the upper soul]. . . . And Metatron is the king of the angels, that is, the ayin-heh-daled of taf-vav-reysh [the ets ha-da’at, the Tree of Knowledge, of tov v’ra, Good and Evil], which has been reversed by mem-reysh-ayin-heh [Moshe rabbeynu alav ha-shalom, our master Moses, peace be upon him].

All this would be cryptic enough without the acronyms. With them, it might as well be written in a secret code.

Certainly, no ordinary Israeli could make head or tails of such writing. And yet, interestingly, while Israeli Hebrew can at times be as far removed from the language of the rabbis as contemporary English is from that of Chaucer, the extreme predilection for acronyms has remained—and not just in erudite circles. Israeli slang is full of such usages, and new ones are coined all the time. I can’t swear that anyone has actually said it, but it would be perfectly possible, on the streets of Tel Aviv, to hear a sentence like, “What bablat! It’s ḥavlaz shosh! If you didn’t like it, zabshekha!” Meaning, sequentially, “What bullshit! It’s fantastic! If you didn’t like it, don’t blame me,” the Hebrew phrases consist of the acronyms bablat, from bilbul beytsim l’lo takhlit, “Pointless ball-busting”; ḥavlaz shosh, from ḥaval al ha-zman sheli v’shelkha, “Why waste our time [by trying to say how good it is]?”; and zabshekha, from zeh ha-b’ayah shelkha, “That’s your problem.”

Much of this comes from the Israeli army, which has a host of its own acronyms for everything from a magad (m’faked g’dud, battalion commander) to a pakal (p’kudat keva likrav, regulation combat ordinance, that is, a fully equipped backpack and, by extension, any physical or mental baggage). But much, too, it would seem, is in Hebrew’s linguistic genes. It took a long time for Hebrew to develop a liking for acronyms, but having done so, it can’t seem to shake the habit.