In 1921 and 1922, Franz Kafka asked his friend, the writer and Zionist activist Max Brod, to burn all of his manuscripts, letters, and drawings in the event of his death. When Kafka died in 1924, at the age of forty-one, Brod refused to heed the request, and began trying to see that many of the writings he found were published—thus securing Kafka’s legacy among the literary of geniuses of the 20th century. Brod brought the papers with him when he fled Czechoslovakia in 1939, just before the Nazi invasion, for the Land of Israel. After a protracted legal battle, the National Library of Israel recently acquired some of these papers, which it has now digitized and made publicly available.

Although his stories rarely touch on Jewish subjects, Kafka throughout his life sought to learn more about the religion of his birth, and resented his parents for denying him a more robust Jewish education. The newly digitized materials, never before seen except by a few eyes, include several drawings. The one below is s titled “A Beggar and a Refined Patron.” (Courtesy of the National Library of Israel, Max Brod Archive.) 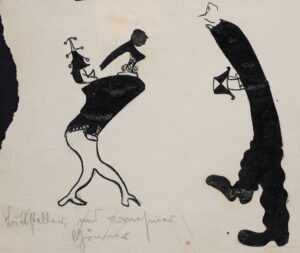 Reforms to Israel’s Judiciary Must Be Carefully Calibrated

The central topic of debate in Israel now is the new coalition government’s proposed reforms of the nation’s judiciary and unwritten constitution. Peter Berkowitz agrees that reform is necessary, but that “the proper scope and pace of reform, however, are open to debate and must be carefully calibrated.”

to preserve political cohesiveness, substantial changes to the structure of the Israeli regime must earn support that extends beyond these partisan divisions.

In a deft analysis of the conservative spirit in Israel, bestselling author Micah Goodman warns in the Hebrew language newspaper Makor Rishon that unintended consequences flowing from the constitutional counterrevolution are likely to intensify political instability. When a center-left coalition returns to power, Goodman points out, it may well repeal through a simple majority vote the major changes Netanyahu’s right-wing coalition seeks to enact. Or it may use the legislature’s expanded powers, say, to ram through laws that impair the religious liberty of the ultra-Orthodox. Either way, in a torn nation, constitutional counterrevolution amplifies division.

Conservatives make a compelling case that balance must be restored to the separation of powers in Israel. A prudent concern for the need to harmonize Israel’s free, democratic, and Jewish character counsels deliberation in the pursuit of necessary constitutional reform.

0 Comments Click to read
Today In Picks
Franz Kafka’s Lost Drawings
Reforms to Israel’s Judiciary Must Be Carefully Calibrated
Ruth Wisse Reflects on Anti-Semitism, the University, and American Society
Israel’s Digital Diplomacy Provides an Information Lifeline to Iranian Protestors
A New Film Tries, and Fails, to Make Black-Jewish Relations Funny
Did the Nazis Try to Assassinate FDR, Churchill, and Stalin in Tehran in 1943?