Rare Color Photos of Jerusalem during the Siege in 1948

In the early days of Israel’s War of Independence, Arab forces managed to cut off Jerusalem, then home to about 100,000 Jews, from the rest of the country. Moshe Levin—a recent immigrant from the U.S. working as a correspondent for United Press and the Palestine Post—took a number of color photographs of everyday life in the city during the subsequent siege, which can now be found at the National Library of Israel. As in biblical sieges of Jerusalem, the residents faced shortages of food and water. In this photograph, Marlin’s wife Betty and another woman give half a loaf of bread to a monk in exchange for water. 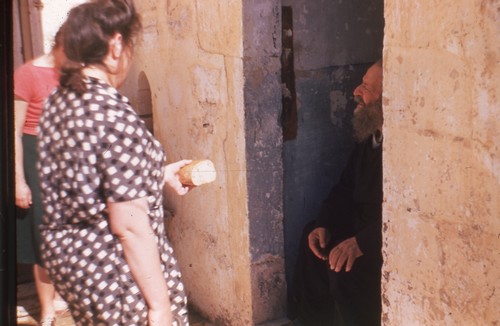 Other photographs, together with historical background provided by Amit Naor, can be found at the link below.

Read more at The Librarians

In September, Cypriot police narrowly foiled a plot by an Iranian agent to murder five Jewish businessman. This was but one of roughly a dozen similar operations that Tehran has conducted in Europe since 2015—on both Israeli or Jewish and American targets—which have left three dead. Matthew Karnitschnig traces the use of assassination as a strategic tool to the very beginning of the Islamic Republic, and explains its appeal:

In the West, assassination remains a last resort (think Osama bin Laden); in authoritarian states, it’s the first (who can forget the 2017 assassination by nerve agent of Kim Jong-nam, the playboy half-brother of North Korean dictator Kim Jong-un, upon his arrival in Kuala Lumpur?). For rogue states, even if the murder plots are thwarted, the regimes still win by instilling fear in their enemies’ hearts and minds. That helps explain the recent frequency. Over the course of a few months last year, Iran undertook a flurry of attacks from Latin America to Africa.

Whether such operations succeed or not, the countries behind them can be sure of one thing: they won’t be made to pay for trying. Over the years, the Russian and Iranian regimes have eliminated countless dissidents, traitors, and assorted other enemies (real and perceived) on the streets of Paris, Berlin, and even Washington, often in broad daylight. Others have been quietly abducted and sent home, where they faced sham trials and were then hanged for treason.

While there’s no shortage of criticism in the West in the wake of these crimes, there are rarely real consequences. That’s especially true in Europe, where leaders have looked the other way in the face of a variety of abuses in the hopes of reviving a deal to rein in Tehran’s nuclear-weapons program and renewing business ties.

0 Comments Click to read
Today In Picks
Rare Color Photos of Jerusalem during the Siege in 1948
How European Fecklessness Encourages the Islamic Republic’s Assassination Campaign
The Story of North African Jewry Doesn’t Fit into Academic Narratives about Colonialism
In the Eyes of the Catholic Church, God’s Covenant with the Jews Remains Unbroken
How Fake History about Jews and the Evolution of European Finance Helped Create Modern Anti-Semitism
Quotas and Racial Classifications Have Divided American Society