“Going Under” in Europe

Wagner’s totalizing anti-Judaism is still alive. It just has a new face, fully revealed in this month’s attacks in Paris. 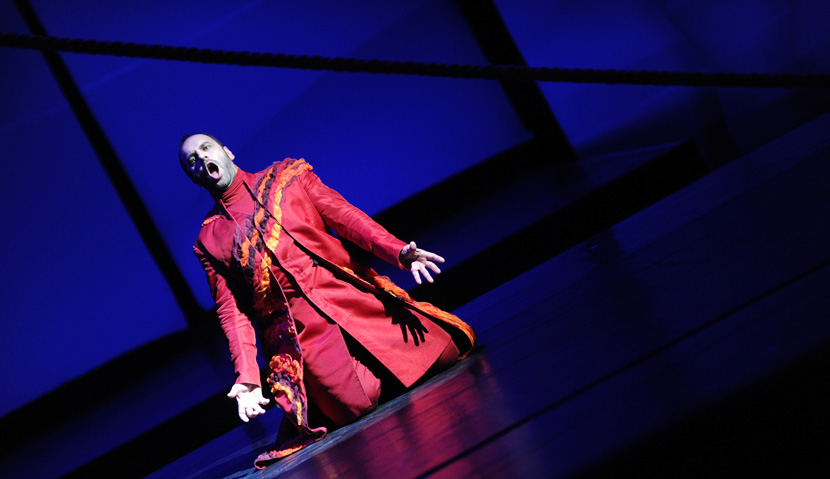 Mihaly Kalmandi as the titular character in a 2013 production of The Flying Dutchman in Budapest. ATTILA KISBENEDEK/AFP/Getty Images.

Response
Terry Teachout
About the author


Terry Teachout is the drama critic of the Wall Street Journal and the critic-at-large of Commentary.

In one of those grisly juxtapositions that are so characteristic of life under the aspect of postmodernity, my first reading of “Wagner and the Jews” was interrupted by the breaking news of the Charlie Hebdo massacre and its aftermath, a second massacre in a Paris kosher supermarket. The smoke had hardly cleared before a prominent British newspaper was publishing a story that started off like this: “More than half of British Jewish people fear Jews have no future in the UK, according to a new study which also reveals that anti-Semitic sentiments are more prevalent than widely believed.” Stephen Pollard, editor of the Jewish Chronicle, had already informed the world that “every French Jew I know has either already left or is working out how to leave.” Europe, it would seem, is well on the way to becoming—to use a term favored by Richard Wagner’s most prominent admirer—Judenfrei.

Hence the uncanny timeliness of “Wagner and the Jews,” in which Nathan Shields takes a searching and persuasive look at the ways in which Wagner’s operas embody his anti-Semitic obsessions. The human capacity for self-deception is and will always be infinite, but I cannot imagine that any lover of Wagner’s music who reads Shields’ essay with an open mind will thereafter find it possible to erect a cordon sanitaire separating the composer’s operas from his ideas. They are consubstantial, as he meant them to be, and those who think otherwise are ignoring the self-evident assertions of their creator, who believed his work to be the New Testament of a religion of art, a “counter-creation” (as Shields explains it) that contained no place for “the Jews or their God”:

[W]hat is frightful about Wagner, what separates him entirely from Luther, is that in perceiving Judaism to stand ineradicably opposed to his own redemptive project, he perceived rightly. The Wagnerian redemption, as he wrote in Das Judentum in Musik, “means firstly for the Jew as much as ceasing to be Jew.”

Shields is equally correct to acknowledge that Wagner was no more prepared to tolerate orthodox Christianity than Judaism. As Parsifal makes clear, both faiths stood in the way of the final realization of his vision of a new life in which all that is solid melts into art. Thus, Jews and orthodox Christians must, in Wagner’s terrible phrase, “go under” by renouncing their identity in the hope of ultimate redemption—for Wagner, unlike the Nazis, at least admitted the possibility of redemption in the case of those colleagues whose musical services he found useful—or be swept away.

Especially in the wake of the Charlie Hebdo massacres, the contemporary parallel with the identically all-encompassing fanaticism of radical Islam is impossible to ignore. The history of the 20th century, as Shields reminds us, was a history of political Gesamtkunstwerken, a succession of failed totalities, one of which was brought into being by a painter manqué who took care to assure the world that “I became a politician against my will. If someone else had been found, I would never have gone into politics; I would have become an artist or a philosopher.” So, too, is radical Islam just such a totality, a monolith in which both the personal and political are religious. Like Hitler and like Wagner before him, the mullahs are deranged idealists who hate the world as it is and wish to make it over again. They come as saviors and offer us redemption, and in return all we need do is surrender our selves.

Indeed, devout Muslims the world over believe that the heathen West is destined sooner or later to embrace their faith, with Europe being the first redoubt of Christianity to “go under.” Theoretically, then, it is also possible, however unlikely (or out of keeping with current practice), that the mullahs of Islamic State would be content to accept the mass conversion of the Jews in lieu of a quick march to the tumbril.

But, for Jews, there is a difference between going under and merely going, and that difference has been given a sharper point by the success of the Zionist project. In the world of yesterday, assimilation seemed the only possible course for European Jews who lacked the faith of their fathers and preferred not to take a chance on America. Today, by contrast, there is a third alternative, chancy in its own way but as stable as any that has ever been open to Jewry. With Europe growing more hostile to its Jews, Israel awaits them with open arms, and anyone who thinks that the Jews of Israel will ever voluntarily “go under” for any reason whatsoever—least of all the siren song of a megalomaniac artist—is as mad as Wagner himself.

But what of the rest of us? Does the cultural elite of the West still have the will to prevail, not merely against radical Islam but against the centrifugal force of its own collective loss of faith in the liberal values from which its identity derives? Now that the shock of the bloodshed in Paris is starting to wear off, we are seeing, just as we did in the wake of 9/11, the steady reassertion of self-doubt. Free speech? Fine as far as it goes, but is there really such a thing as a right to offend? Better to keep your opinions to yourself—unless they’re the right ones, of course.

Meanwhile, Europe’s birthrates are plummeting in a way unmistakably indicative of an irreversible loss of societal morale. Five days before the dogs of war came calling on the staff of Charlie Hebdo, my own paper, the Wall Street Journal, ran a feature story about how churches all over Europe are closing their doors for lack of interest in religion. According to the author, such closings are fast becoming the norm in

a continent that long nurtured Christianity but is becoming relentlessly secular. The closing of Europe’s churches reflects the rapid weakening of the faith in Europe, a phenomenon that is painful to both worshipers and others who see religion as a unifying factor in a disparate society.

One would dearly like to hold fast to the conviction that many of those unnamed “others” are unwilling to live in a Europe that has become—shall we say—Christenrein, and with might and main would resist the invitation to “go under.” One may also take leave to doubt that even in such a Europe, the Vatican would yield pride of place to Bayreuth. A century and a half after Tristan, Wagner will never be again as he was: we prefer less insistently demanding gods. But what other mode of belief is strong enough to stand up to those who demand that the world be made anew? Does a fully secularized Europe have the sinews to defy the totalists and defend the pluralist values of the Enlightenment? Or will it be forced yet again—and perhaps too late—to look elsewhere for help? We shall soon see.

“Going Under” in Europe
1. Essay

Wagner and the Jews
2. Response

Something More Profound than Prejudice
4. Response