They are still invoking dated forms of self-abnegation, or engaging in more or less ignorant forms of advocacy, or yearning for a vague universalism. 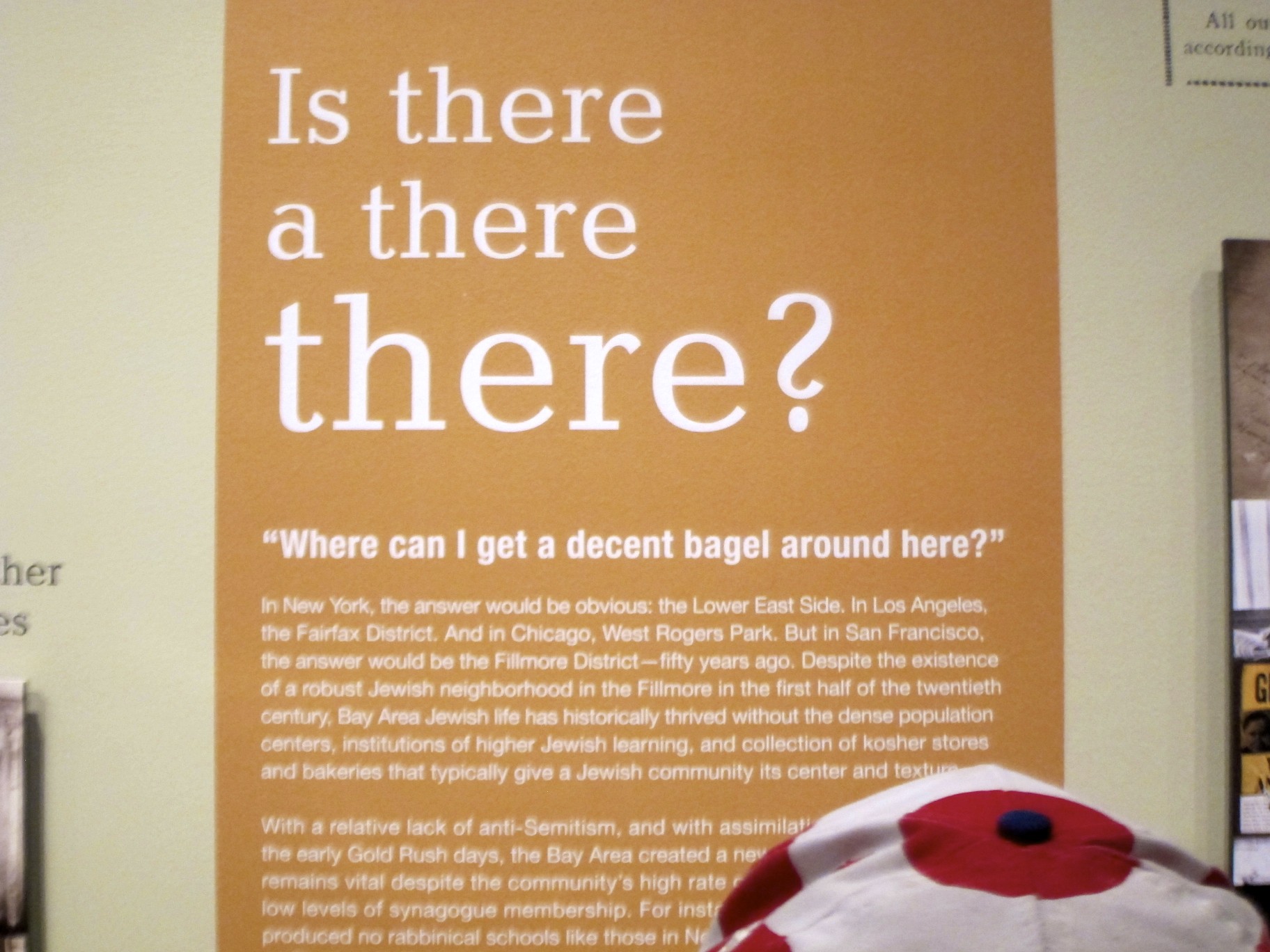 A placard at the 2011-2012 California Dreaming exhibition at the Contemporary Jewish Museum in San Francisco. Flickr/donotlick.

Why are there Jewish museums? And what are they meant to accomplish? Among the many issues raised by the generous and thoughtful responses to my essay by Diana Muir Appelbaum, Walter Reich, and David Gelernter, these fundamental questions loom large.

For Appelbaum, the impulse to keep creating Jewish museums—an impulse that, as she points out, is an extraordinary phenomenon in itself—has something to do with Jewish preoccupations with commemoration and consensus. Jewish museums have been created, she suggests, partly as a memorial to a way of life lost, and partly as an attempt to find the least common denominator for those who remain. For Reich, who has experienced first-hand the pressures and paradoxes of these institutions, the Jewish museum can be easily misdirected, turned into a demonstration for the non-Jewish world, an attempt to justify and placate, with the promise that everyone will be better off for the universalist lessons learned. For Gelernter, Jewish museums, most of which “don’t know what they’re doing,” could instead become institutions for Jews to learn about themselves and perhaps, not incidentally, demonstrate to all the nature of Judaism’s influence and importance, with the Hebrew Bible at the core.

A melancholy strain runs throughout these observations. My three respondents are alike in recognizing that for all of Western culture’s contemporary preoccupations with multiculturalism and ideas of identity, for all the successes of individual Jews in the contemporary world, for all the much-heralded American liberation of Diaspora Jewry from the travails of history, mainstream Jewish culture—which has long sought full participation in society’s blessings and responsibilities—is still bewildered and conflicted, still invoking dated forms of self-abnegation or engaging in relatively ignorant advocacy, still yearning for a vague universalism that no other group courts with such avidity.

Jewish museums reflect that confused condition. In addition, the currents of American life—and of Western culture in general—have, for decades, been leading toward the very fragmentation and particularity that secular mainstream Jewry so frenetically seeks to flee.

The resolution, in my view, is neither to adopt identity politics in the manner of other groups nor to embrace the pre-modern isolation of many ḥaredi communities. But unless we are to remain content with the kind of resolution proposed by many Jewish museums—unless, that is, we are prepared to find Judaism’s millennial fulfillment in a dissolution into assimilative liberalism—some other form of enlightenment is needed.

In my essay, I traced the evolution of two main genres of museums: the enlightenment museum, with its encyclopedic, rationalist ambitions that were often combined with a culture’s elevated view of itself and its possibilities, and the identity museum, which has settled into a formulaic narrative in which the embrace of a particular identity is presented as a form of liberation, with impassioned advocacy revealing what was too long hidden or suppressed by the majority culture. The Jewish museum, as we have seen, is an identity museum that is wary of identity. It is almost a distinctive type.

What might a different sort of Jewish museum be? Could it play a kind of pedagogical or even spiritual role? I have seen a number of museums designed specifically for communities of believers. Four years ago, I visited the Church History Museum of the Church of Jesus Christ of Latter-day Saints in Salt Lake City. Taking faith for granted, it recounts not the nature of Mormon belief but the history of how that belief came into its contemporary institutional power. The account begins with a divine visitation to a New York State farm boy, Joseph Smith, and his reception and translation of the Book of Mormon, said to be inscribed in hieroglyphs on gold plates and containing a narrative extending the Hebrew and Christian Bibles into the New World. The museum then traces how Smith’s revelation led to the development of a religious community and met with rampant persecution. The history of the religion then becomes knit into the social and political history of the United States. The museum includes an account of Mormon migrations westward, of settlements in a land seen as a new Zion, and the development of a society based upon Mormon doctrines. The museum is not designed to convince an outsider of anything, other than of how typically American the Mormon narrative is and is meant to be.

I also visited the Billy Graham Library after its 2007 opening in Charlotte, North Carolina, which takes the Graham family homestead as the foundation of a pastoral narrative of 20th-century revelation and ministry. “We invite you to join us on a journey of faith,” the opening film proclaims. The displays weave together an account of Graham’s life with a chronicle of his religious impact. Here too, the museum’s preaching is essentially to the converted, directed at those who already share a common vision. For an outsider, what comes across from the videos and artifacts is Graham’s gift for simulating intimacy in the midst of crowds and for seeming to respond to personal concerns with public speech, a gift that must have also helped attract the many public figures who sought his council.

These are museums for believers meant to strengthen both belief and belonging–a bit like the Creation Museum in Petersburg, Kentucky and its quixotically weird attempt to dramatize the biblical alternative to the theory of evolution. In many ways such religious museums are similar to identity museums, reinforcing a community’s primacy. In truth, it is difficult to imagine something similar working for Judaism. In the Jewish past, views have always been more disparate and contentious, and history far more complex, than Jewish museums have allowed; in the present, identifications are far more elusive and the contemporary Jewish audience more complicated. Parts of that audience lack sufficient knowledge about the religious tradition and its texts; parts seek specific messages of belief; parts are simply curious to learn whatever is on offer; parts are interested in new interpretations of facts already known. There may be an underlying appetite for knowledge, but Jewish museums cannot satisfy it by presuming belief or conviction as do other religious or ethnic museums.

Could Jewish museums provide a terrain for exploring and even resolving these tensions? In that connection, David Gelernter’s suggestion of a museum based on the Hebrew Bible is intriguing, though difficult to imagine working as a museum: that is, as a public forum that gathers together disparate listeners and viewers in order to amuse and educate their equally disparate impulses in the presence of something remarkable. To my mind, the admirably substantive content he proposes—that is, an interpretation of the biblical presence in the civilization of the West—would be better suited to an argument made in an essay or book. Still, what a relief it would be to find his forthright embrace of complex ideas and assertions in Jewish museums that have otherwise often shackled themselves to a model that, seemingly so exuberant, inspires only a persistent melancholy.

How Jewish Museums Reflect the Condition of Mainstream Jews
1. Essay

Why Are There So Many Jewish Museums?
3. Response

Holocaust Museums and the Itch to Universalize
4. Response