It’s one thing to hold a jazz night in order to draw people into a synagogue building. It’s quite another to show them why the synagogue exists and how it serves its purpose in existing. 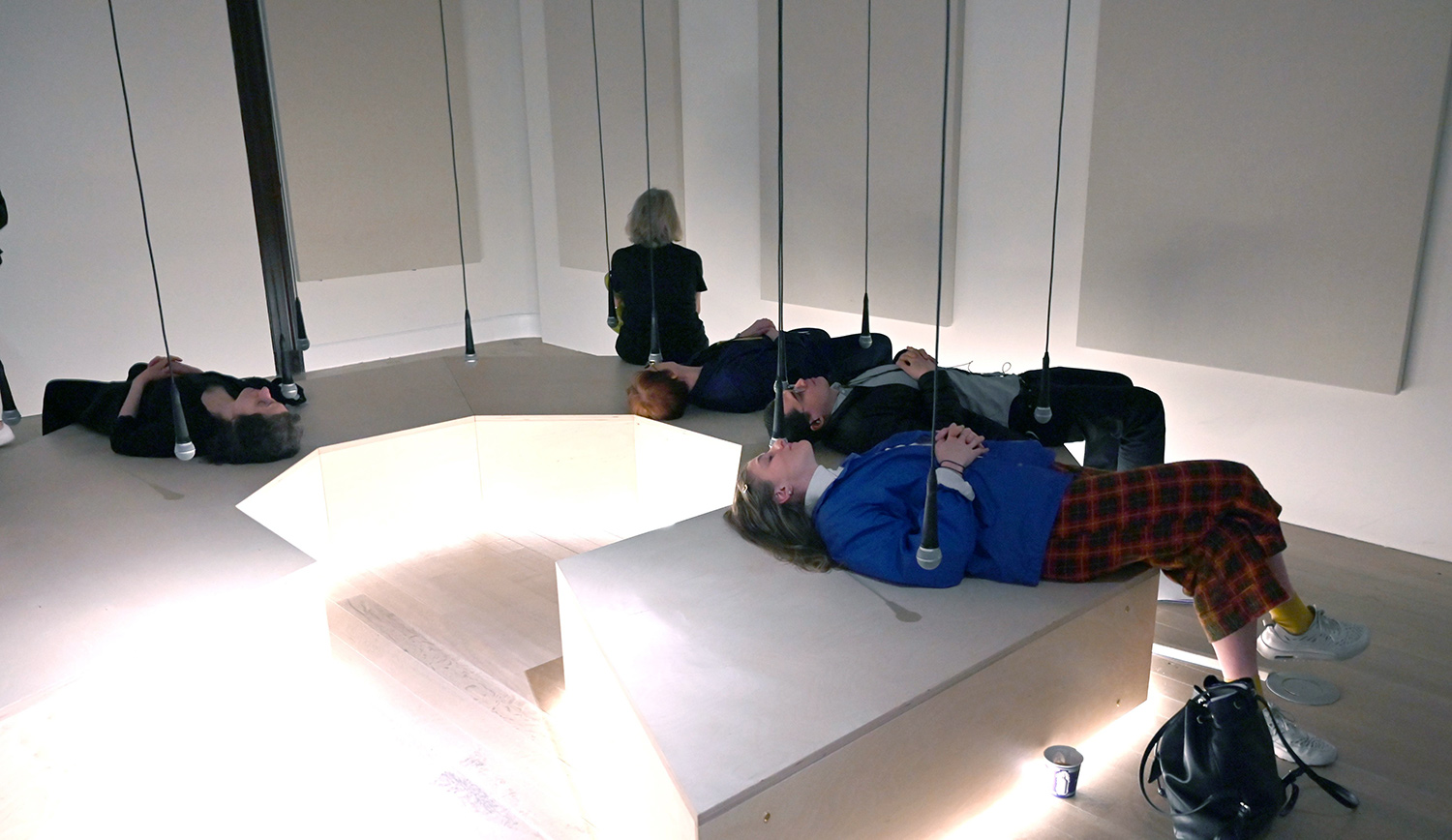 Visitors at an art exhibit inspired by the life and work of Leonard Cohen at the Jewish Museum in New York on April 9, 2019. TIMOTHY A. CLARY/AFP/Getty Images.

I’m very grateful to Tom Freudenheim, Edward Rothstein, and Richard McBee for their responses to my essay on the doleful condition of New York’s Jewish Museum. It’s wonderful to have the thoughts of a former museum director, a critic, and a painter, all three of whom have long been wrestling with some or all of the issues I dealt with. It’s all the more gratifying that, for the most part, their peer review of my essay finds me in the right.

I’d also like to acknowledge here the many reactions to my essay on social media and the dozens of individuals (including curators and other museum officials, historians, writers, and teachers) who emailed me with their comments, not excluding the harsh and/or dismissive ones.

In a half-dozen posts on Facebook, Barbara Kirshenblatt-Gimblett, one of the most prominent voices in the Jewish museum world, suggested that Scenes from the Collection, the Jewish Museum’s latest permanent exhibition and the main object of my scrutiny, deserved a slower look than mine. “Give the exhibition a chance,” she wrote. “Consider it in its own terms before judging on the basis of different assumptions. Imagine creatively and constructively how it might be otherwise.” Taking an entirely different tack, another reader commented bitterly on the Mosaic website: “Pretty bizarre that you felt the need to tear apart an exhibition that’s already been open for almost two years already and has been received extremely well.” Evidently, my essay, too premature for some, was too belated for others.

I was especially touched to see a comment on Mosaic by Sylvia Herskowitz, director emerita of the Yeshiva University Museum, who signed off with this: “I pray that the Jewish Museum rights its course.” I daresay that many of the museum’s critics share that sentiment. But until that happy day comes, although I wouldn’t advise readers to ignore the museum altogether, I would caution them to visit with their eyes wide open to the specifically Jewish part of its mandate and name. For those wishing to experience Jewish art and culture displayed in a thoughtful, appropriately respectful, and contextualized setting, I’d recommend other places before or instead of this one.

Turning now to my three respondents: Richard McBee, a painter of biblical and other religious subjects and a long-time friend, recently joined me on a tour of Washington’s Museum of the Bible. As we were discussing some of the topics in my essay, we joined a small crowd of visitors who had stopped to watch the Orthodox scribe (sofer) hired by that museum to write a Torah scroll in real time, explaining what he was doing as he went along. Why, we wondered, didn’t the Jewish Museum think of doing something like this?

In his response, McBee now writes that my essay and the preceding comments on it by Rothstein and Freudenheim “have accurately diagnosed a serious cultural malady.” He then poses a tantalizing thought experiment: “What would an ideal New York Jewish Museum look like?” If I can read between the lines of the proposal that follows, he is saying in his own way something similar to Barbara Kirshenblatt-Gimblett—namely, that the museum shouldn’t just be put down; a suggestion should be offered to improve it.

Although I myself don’t believe that a critic is necessarily obliged to offer “constructive suggestions” at every turn, in this case I find the idea appealing. Here’s how McBee sees it: an ideal Jewish museum must begin, he writes, by being “proudly Jewish: ethnically, intellectually, and religiously.” In addition, his ideal Jewish Museum would devote significant exhibition space to contemporary Jewish art and culture, and hire staff with the competence to navigate, interpret, and assess it in a manner “faithful not only to the monumental texts of the tradition but to the tradition of Jewish visual culture itself.”

Anticipating skeptics who would question the existence of a sufficiently interesting or worthy contemporary Jewish culture, McBee points to the hundreds of Jewish artists “hiding in plain sight” both in the Diaspora and in Israel, and organized in groups like the Los Angeles-based Jewish Artists Initiative and the New York-based Jewish Art Salon. “The Jewish Museum in New York already possesses a world-class collection of Jewish art and Judaica,” McBee concludes, “as well as a century-old scholarly pedigree that could theoretically entitle it to claim the mantle of leadership. It simply needs the will, and the conviction, to live up to the ‘Jewish’ in its name.”

With all of this I wholeheartedly agree; the sad alternative is today’s Jewish-in-Name-Only Museum, or what some might call the Self-Hating Jewish Museum. As for McBee’s stress on the contemporary scene, my search of the Jewish Museum website yields returns for neither “Jewish Art Salon” nor “Jewish Artists Initiative”: two groups of artists proudly identifying as Jewish (however they define it), with a collective membership, by McBee’s tally, of about 425 artists whom the museum either doesn’t know about or, worse, knows about and finds “too Jewish.”

These two groups are sometimes said, including by McBee, to represent a Jewish cultural renaissance. As with any such claim, there’s need for healthy skepticism. But the existence of hundreds of Jewish artists collectively exhibiting and participating in public discussions of Jewish culture deserves attention from journalists, critics, and museum curators alike.

In his own response, Edward Rothstein returns to the current permanent exhibition, which he earlier reviewed for the Wall Street Journal. Zeroing in on the museum’s habit, throughout the exhibition, of juxtaposing contemporary objects with random artifacts taken from its core collection—for instance, a paper-mâché golem made of Chinese and Japanese newspapers alongside a 100-year-old Jewish bridal dress from Marrakech, or the exhibition’s showcase triptych of a painting by Kehinde Wiley next to an 1877 mizraḥ from Ukraine and an 1890s synagogue ark from Iowa—he makes a blunt, powerful point. By means of such yokings, he writes, the “weightier, more evocative, and more important historical or religious artifact” (i.e., the dress, the ark) “is made to seem artificial and inconsequential by being mounted, without context, alongside an artifact that is already ironic and inconsequential” (i.e., the paper-mâché golem, the Wiley painting).

This acute criticism reminds me of the feeling that wells up inside me when a youngster refers to the iPhone as history’s most important invention. It’s not only that the museum is hawking crowd-pleasing chocolate rather than nutritious spinach (remember the printing press?), but that a kind of counterfeit currency has been intentionally mixed in with real legal tender, with the added suggestion that there’s no difference of value between them, or that the new by definition trumps the old.

This is indeed the current landscape at the Jewish Museum. About it, Rothstein no less bluntly concludes:

Perhaps [the museum’s] great religious and historical collections, so meticulously acquired over more than a century, should be ceded to a real Jewish museum, along with the Warburg mansion that was donated for the purpose of housing them. It’s worth a conversation.

He’s right again. If the museum would really like to be an Upper East Side version of the Whitney, which has since moved out of the neighborhood, perhaps any number of other institutions would make better-qualified custodians—and exhibitors—of its important collection. The physical safety of the collection is vital; no less vital is allowing these value-laden objects to tell their Jewish stories.

This brings me to the important context added by Tom Freudenheim, who worked at the Jewish Museum in the heady 1960s when it became a prime venue for avant-garde art, only occasionally done by Jews. At the time, he writes, the museum, following the example set in the 1930s by Berlin’s Jewish Museum, told itself something along the following lines: “Jews were a cosmopolitan people, interested by definition in a wide range of ideas and areas of cultural creativity both within and outside of the Jewish world.” Therefore, a Jewish museum could be relevant to the larger culture without being Jewish. In this calculus, the ultimate losers were bound to be both the Jewish content and Jewish values.

But Freudenheim, who is nothing if not discriminating, also takes issue with my own evidently too-kind estimation of the museum’s previous permanent exhibition, Culture and Continuity: The Jewish Journey. Where I have nothing but praise for that exhibition’s scholarship and gravitas, he focuses on its promise to reveal to visitors the mystery of Jewish survival. “In fact,” he writes with some asperity, “it’s sheer museological vanity to suggest that Jewish survival can be understood via Judaism’s material culture alone.” He’s right; I wish I’d thought of that.

The main issue, to Freudenheim, is that the Jewish Museum’s core collection is not displayed as its core collection but is trotted out selectively for other purposes, “seen only in the context of thematic and temporary special exhibitions like [the current one], surrounded by works of tangential, or arbitrary, or opaque relevance.” This practice, he writes, “can only reflect a disdain for the museum’s core assets on the part of the institution’s leadership (both the staff and the trustees).”

All too true. To invoke a metaphor here: it’s one thing to hold a carnival or a jazz night or yoga class in order to draw people into a synagogue building. It’s quite another to show (or remind) them why the synagogue exists and how it serves its purpose in existing.

The Jewish Museum appears to regard its core collection of Judaica as too mundane or too boring in itself to draw people in; hence the need for diverting smokescreens and mirrors. From this point of view, its “disdain for [its] core assets,” in Freudenheim’s apt phrase, represents a failure not only of self-respect but also of knowledge and imagination—fatal defects in any museum. It might even represent a strategic failure: namely, misjudging its potential audience. Ask the Museum of the Bible about that.

Ze'ev Maghen
May
The Wreck of the Jewish Museum
5. Last Word

Can the Jewish Museum Be Saved?
1. Essay