The great theme of his work is resistance to spiritual constraint, the soul’s freedom as the highest value. 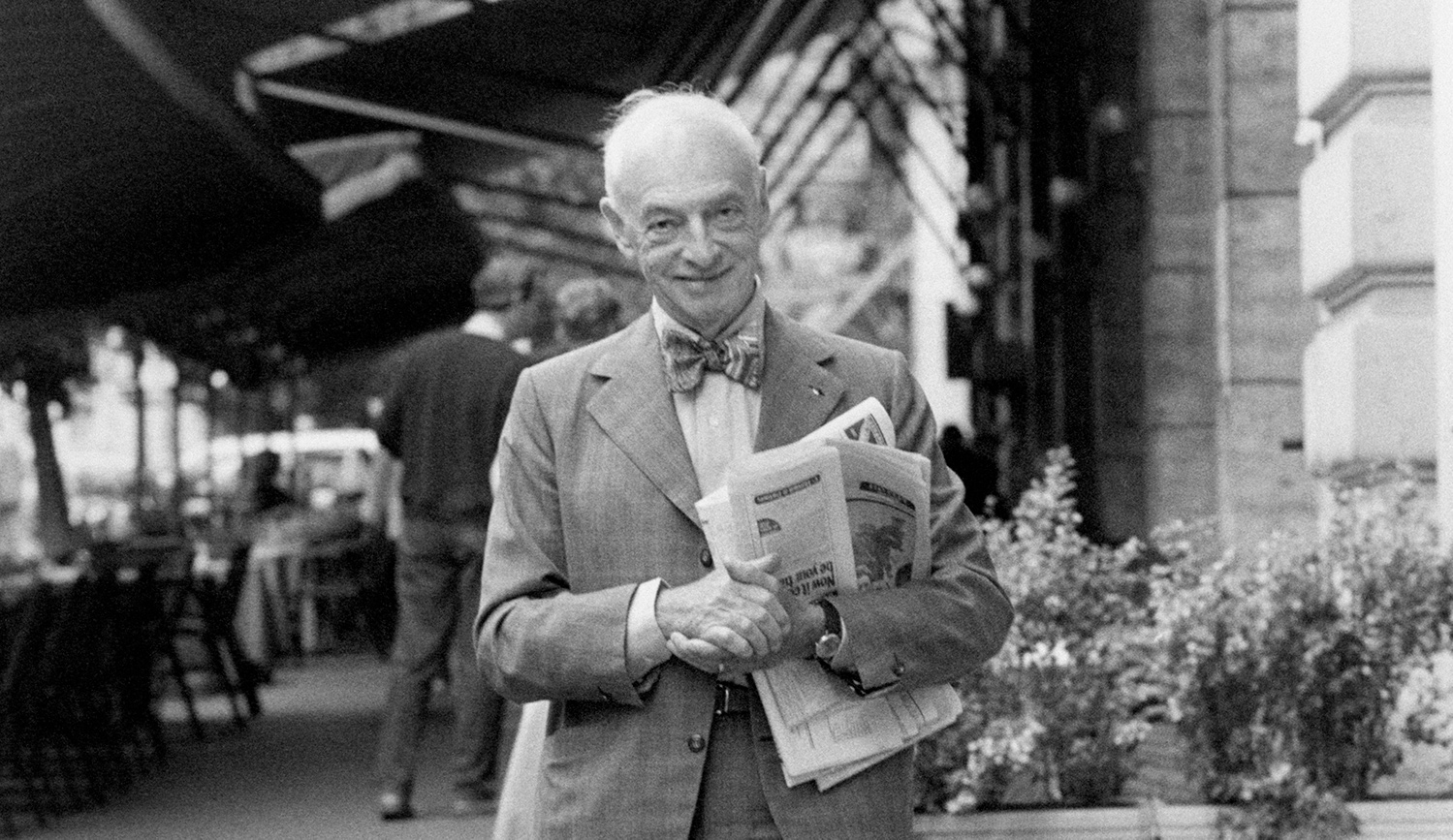 Saul Bellow in Italy in 1984. Marisa Rastellini/Mondadori via Getty Images.

Response
Adam Kirsch
About the author


Adam Kirsch, a poet and literary critic, is the author of, among other books, Benjamin Disraeli and The People and The Books: Eighteen Classics of Jewish Literature.

Saul Bellow didn’t like the word “task” as applied to literature: “tasks are for people who work in offices,” he once cracked. Yet Ruth R. Wisse’s survey in Mosaic of Bellow’s achievement as an American Jewish novelist, “What Saul Bellow Saw,” shows that synthesizing those two parts of his identity, the American and the Jewish, was indeed a lifelong task, one that occupied his fiction from The Victim (1947) to Ravelstein (2000).

I don’t think Bellow ever did achieve that synthesis—which doesn’t necessarily mean he failed. Perhaps integrating Americanness and Jewishness is one of those responsibilities from which American Jews are not free to desist, even if they never manage to complete it.

Wisse’s closing image, of Bellow as a Jewish writer breathing life into the American soul, gives him almost godlike power. But as Cynthia Ozick has emphasized in her own work, there is something about this conception of the writer as Creator that is profoundly at odds with Judaism. Indeed, I think it’s possible that of the writers who along with Bellow created the golden age of American Jewish literature—prominently including Bernard Malamud, Philip Roth, and Ozick herself—Bellow yields least to interpretation through the lens of Jewishness.

Unlike Malamud, Bellow does not see being Jewish as a profound metaphysical condition that holds the key to understanding humanity. Unlike Roth, he is not especially interested in the sociology of American Jewish life—the way the claims of Jewish solidarity clash with the freedom that America promises. And unlike Ozick, he does not think of Judaism as a religious tradition that determines the categories of his thought. Bellow was being honest when he wrote in a 1974 essay:

I am often described as a Jewish writer. In much the same way, one might be called a Samoan astronomer or an Eskimo cellist or a Zulu Gainsborough expert. There is some oddity about it. I am a Jew, and I have written some books. I have tried to fit my soul into the Jewish-writer category, but it does not feel comfortably accommodated there.

The idea that the soul demands accommodation, that its freedom is the highest value, is not very Jewish—but it is profoundly American, uniting Bellow with Emerson and Whitman.

The great theme of Bellow’s work is resistance to spiritual constraint, a resistance that lies at the root of, among other things, his hostility to bourgeois ambition and materialism. In Herzog (1964), the protagonist Moses Herzog remembers his brother Shura “plotting to master the world, to become a millionaire”; Herzog himself, by contrast, is comically helpless in the world, so intent is he on his own thoughts and feelings. Bellow liked to observe that he was fortunate in coming of age during the Depression, when it was simply impossible to make money. This freed him and a few like-minded Jewish intellectuals to concentrate on literature and ideas.

And for Bellow, as for most other American Jewish writers, the ideas that mattered were found not in Jewish texts but in the Great Books of classical and modern Europe. For him, the notion simply made no sense that because he was Jewish he might have a lesser right than others to (in Matthew Arnold’s famous phrase) “the best that has been thought and said.” That sovereign sense of self gave him the right to stand on equal ground with anyone.

As Augie March, the character whose “adventures” form the plot of Bellow’s breakthrough 1953 novel, puts it:

And what did I think of myself in relation to the great occasions, the more sizable being of these [great] books? Why, I saw them, first of all. So suppose I wasn’t created to read a great declaration, or to boss a palatinate, or send off a message to Avignon, and so on. I could see, so there nevertheless was a share for me in all that had happened.

The challenge for Bellow’s brand of universalism is, precisely, to make sense of Jewish particularity. “I am an American, Chicago-born,” Augie boasts, but is every American like every other, or do ancestry, culture, and religion continue to shape them differently?

If Bellow’s soul was uncomfortable with the Jewish label, his biographical self positively luxuriated in it: perhaps no writer has evoked better than he what it felt like to grow up in a poor Jewish immigrant family. For Moses Herzog, as for Bellow himself, it is Montreal rather than Chicago that provides his earliest, warmest memories: “To this Moses’s heart was attached with great power. Here was a wider range of human feelings than he had ever again been able to find.” Throughout his work, Jewish familial settings and relationships produce the strongest emotional reactions, whether it’s Tommy Wilhelm and his father in Seize the Day (1956) or, four decades later, Harry Trellman and his childhood love in The Actual (1997).

It was not until he himself was middle-aged that Bellow seemed to feel the need to give Jewishness a dimension beyond the personal and emotional—to make it the source of some kind of ethical meaning. The first book in which this happens is Mr. Sammler’s Planet (1970), which, as Wisse says, is Bellow’s attempt to create “a character with greater moral authority and tougher experience” than his own. Not coincidentally, it is also Bellow’s first book to reckon seriously with the Holocaust, which is strangely absent even from The Victim, a book about anti-Semitism written immediately after World War II.

Artur Sammler’s status as a Holocaust survivor is what gives moral weight to his grim observations of American decay and decline. “He had learned in Poland, in the war, in forests, cellars, passageways, cemeteries,” Bellow writes of Sammler: “[t]hings he had passed through once which had abolished a certain margin or leeway ordinarily taken for granted.”

Jewishness, in Bellow’s later work, thus becomes associated with ideas of moral earnestness and responsibility—qualities that, as Wisse observes, he began to feel had gone missing or been trampled upon in post-1960s America. But, again, there was a thinness to this association, apparent in the improbability of Sammler’s life story, which Bellow designs so that this Polish Jew knows more about H.G. Wells and English socialism than he does about Judaism. In the second half of his career, even as Jewish identity became more salient in Bellow’s work, he was much more curious about Rudolf Steiner’s anthroposophy than he was about any specifically Jewish spiritual traditions.

The truth may be that for Bellow, as for many other American Jewish writers, Jewishness was an empty signifier, available to be filled with emotions and ideas born of family memories, a loose understanding of Jewish history, and encounters with anti-Semitism. The buoyancy of Bellow’s fiction derives from a sense of metaphysical liberation from the claims of the past—a freedom that was perhaps only possible to his generation of American Jews, who came of age in a world before the Holocaust and the creation of Israel. It may be partly to taste that freedom that we read Bellow today, in our very different world.

Why Bellow Was the Least Jewish Writer of the Golden Age of American Jewish Fiction
1. Essay