It should focus on the message and influence of Judaism’s core texts and beliefs—not on the sentimentality and kitsch that too many Jews associate with Judaism today. 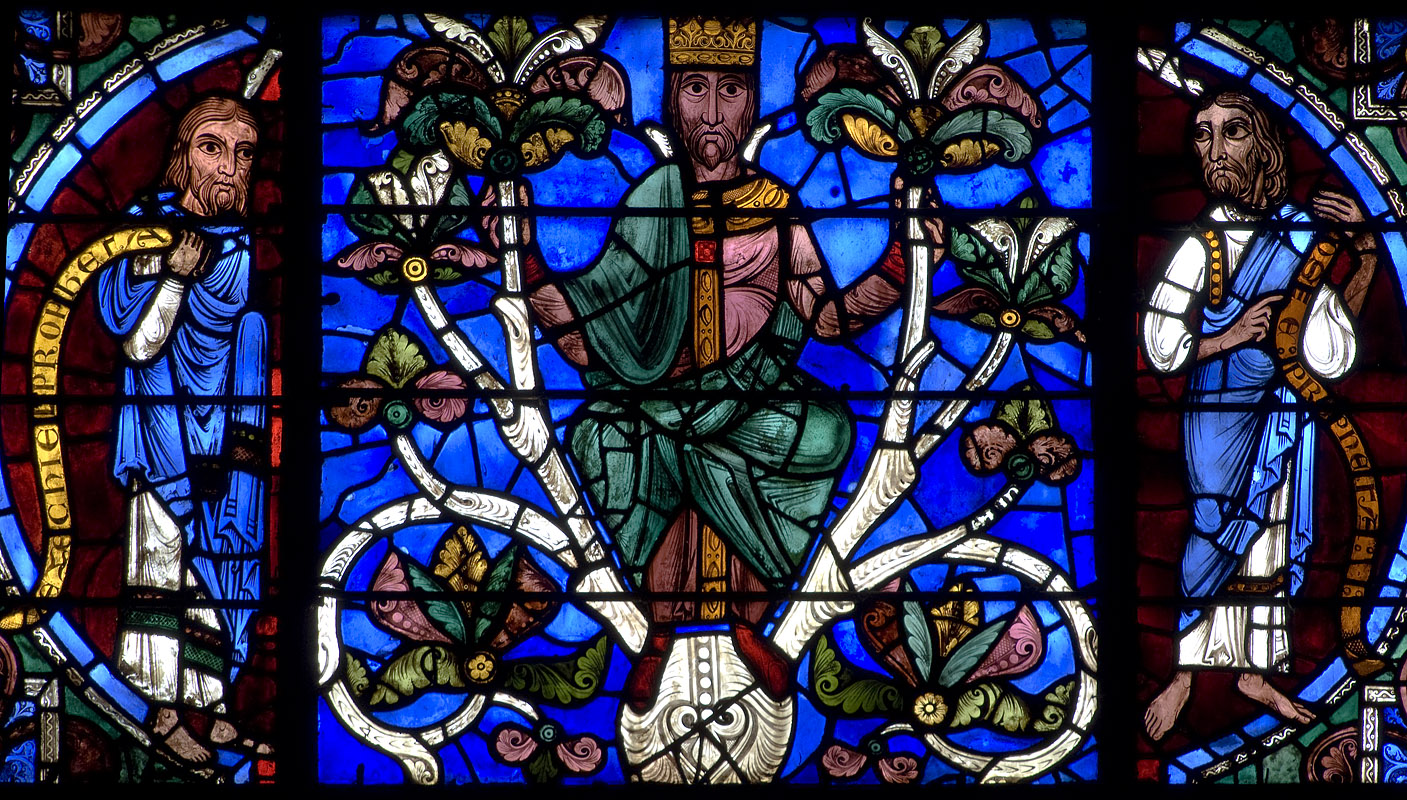 A section of the Tree of Jesse window at Chartres Cathedral depicting Ezekiel, David, and Hosea. Wikimedia.

Response
David Gelernter
About the author


David Gelernter, a professor of computer science at Yale, is the author of The Muse in the Machine, Americanism: The Fourth Great Western Religion, Judaism: A Way of Being, and The Tides of Mind: Uncovering the Spectrum of Consciousness, just released by Liveright/Norton.

Edward Rothstein’s essay, “The Problem with Jewish Museums,” is an impressive analysis of a problem that many museum-goers have noticed: most Jewish museums don’t know what they’re doing. They have no clear view of Judaism or the Jewish community; accordingly, they have little or nothing to say, except on the topic of Jewish participation in the surrounding Gentile culture.

This is one more expression of the failure of liberal Judaism, a movement that has always known what it isn’t but rarely what it is. But the failure of liberal Judaism is equally a reflection on Orthodox (and Orthodox-tending) Jewish communities, which have generally not taken the trouble to build museums good or bad. (As Rothstein mentions, Yeshiva University Museum in Manhattan is an important exception.)

The Jewish-museum problem is too important to shrug off. Rothstein concludes with a challenge to those with a “more rooted and substantive view of Jewish identity” than the vague mishmash that prevails at the major museums: what, he asks, should a 21st-century Jewish museum be like?

Here is one possibility.

A classical museum centers on a collection; a modern museum, in the style of the science museums that flourished after World War II, presents information memorably by adding images to language. Judaism has never cared much about explaining itself. It doesn’t seek converts and was never likely to win any popularity contests, what with the cards stacked against it. Christianity, its own child, bitterly resented Judaism as so many sons have resented their brilliant and overbearing fathers.

But Judaism’s unwillingness to explain itself must change: too many young American Jews know nothing about it. A museum is one good way to teach them something, and I would begin at the beginning: with a museum of the Hebrew Bible. It must be beautifully designed; must be a work of art inside and out. The building and the exhibits must be striking.

The museum would present the Bible as creating an inner world in dramatic contrast to some outer world. Mainly it would rely on high-definition TV screens arranged in an inner, biblical ring of assertions, exhibits, and explanations and an outer ring that uses film sequences to create memorable impressions.

The first gallery is an introduction. Here the outer ring would suggest the violence of ancient Near Eastern paganism—for example, an ominous smoky blank pierced by the occasional image of an infant bound for the altar. The child (unfocused, blurry) seems to be pressed against the screen, and is then engulfed in flame and disappears. We hear the shrieks of infants and mothers. In the inner ring, we see a contrasting series of simple assertions in large type, with explanations (and occasional spot-lit objects in display cases) below the headlines: “The biblical book called the Song of Songs is a poem about love.” “The biblical book called Ruth is a story about love.” “Jacob’s history is a story about love.” “Joseph’s story is about love defeating hatred.” “The story of Hannah is about love.” “The book of Isaiah is the origin of our idea of social justice.” “The Psalms, the most important poems ever written, are about love conquering despair.” “The book of Jonah is about God’s love for every human being.” “The book of Job is about questions we can’t answer.”

Most museums devalue the objects they display by showing too many of them. A clay pot or lamp from Second Temple times is uninteresting if it’s surrounded by hundreds more such pots and lamps. But a few objects from biblical times, or a decorated medieval Hebrew manuscript, or an early printed Bible will add depth to this first gallery if each object stands in a case by itself, carefully spot-lit and explained. If an object is treated as if it were fascinating and important, visitors will take it to be fascinating and important.

The following gallery poses bold questions, which are explained and answered by the exhibition text beneath them. “Why does Moses, the most important figure in the Bible, die on the very brink of achieving his life’s goal of entering the land of Israel?” (Images of the land seen from a mountaintop, with a figure vaguely present at the edge of the screen.) “Why is King David, the most beloved hero of the Jewish people, harshly denounced by the prophet Nathan?” “When surrounding societies were buying and selling women like cattle, why did the prophetess Deborah lead Israel into battle?” “What does the prophet Elijah hear in the ‘still, small voice’?” “Why does Abraham, who is closer to God than any human being but Moses, denounce God for injustice?”

Next comes a transitional gallery, in which visitors take seats in a dimly lit circular space. When the room is full, a narrator appears (on film) in the display in front of the room to explain that Christianity is a form of Judaism—a form Jews reject, but a form in which Jewish ideas laid the basis of Western society, spreading throughout Europe and the Americas to a significant fraction of the whole world. The narrator reads the passage from the Gospel of Luke in which Jesus is asked how to achieve eternal life—how to live perfectly—and gives an answer that combines two Hebrew verses, on loving God with all your heart, soul, and might and on loving your neighbor as yourself.

Then the narrator explains that the greatest art we have was inspired by Christianity—much of it based directly on the Hebrew Bible and much of the rest based on it indirectly by way of the New Testament and Christian doctrine. Above the narrator’s head appears a brilliant life-sized image of the Tree of Jesse window at Chartres Cathedral. The space in which the audience sits is a tall, upright cylinder, whose inner surface is now covered by spectacular images of medieval glass. “All of these are Christianity’s meticulously drawn illustrations of people and events from the Hebrew Bible.” The Sanctus from Beethoven’s Missa Solemnis wells up.

Three main galleries remain. The first presents the Hebrew Bible and biblical kingship as the model on which European kingship was based—the model, that is, for the modern state as opposed to an empire or barbarian horde. Visitors walk around a model of the English coronation chair while Handel’s anthem “Zadok the Priest” fills the space—“Zadok the Priest and Nathan the Prophet anointed Solomon King. . . .”

The next gallery is about the creation of the United States: the biblical republic. Background images show breakers on a Cape Cod beach and (on the other side of the room) vast forests stretching inland. Displays present the four elements of the American creed: liberty, equality, democracy—each with the biblical passages that served the American colonists as authority for that particular idea—and finally American exceptionalism (or American Zionism), with some of the thousands of passages in colonial sermons and tracts referring to the “New Israel,” the “New American Israel,” the “American Zion.”

In the final gallery, a collection of verses in King James English and the original Hebrew: “Choose life and live.” “Man does not live by bread alone.” “Do not follow a multitude to do evil.” “Do justice, love mercy, and walk humbly with your God.” The other dozen or so are easy enough to imagine.

Will anyone come? America’s liberal culture, especially its teachers and professors, knows little or nothing about the Bible, especially the Hebrew Bible, and tends to despise it. But if the architecture is spectacular and the design is stunning, people will want to see it. The project will obviously be expensive. But how much is it worth to keep the American Jewish community (except for its devoted, mainly Orthodox and ḥasidic core) from dissolving into thin air?

One museum can hardly stop the dissolution. But it would be a step in the right direction: a direction that centers on brilliant art and design, careful scholarship, bold and provocative assertions—not on the sentimentality and kitsch that too many Jews associate with Judaism today. And—who knows?—it could stimulate the hunger for more.

What a 21st-Century Jewish Museum Should Look Like
1. Essay

Why Are There So Many Jewish Museums?
3. Response

Holocaust Museums and the Itch to Universalize
5. Last Word