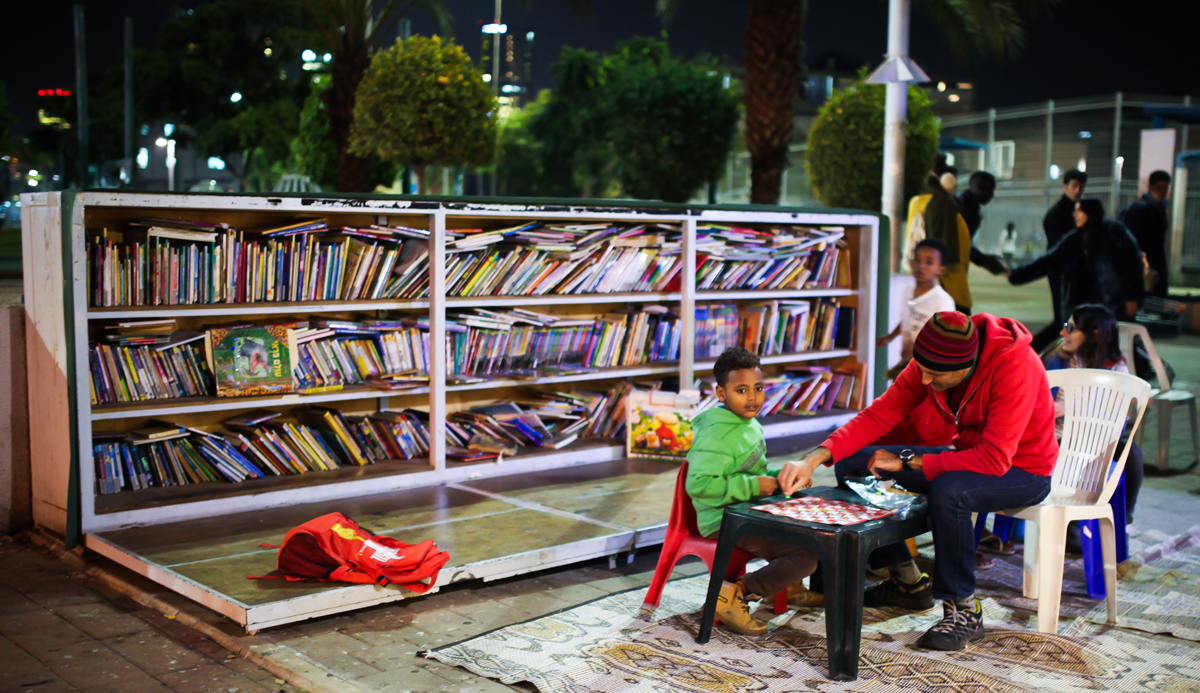 A child and a man sit together at an outdoor book garden in Tel Aviv, December 9, 2015. Esther Rubyan/Flash90.

For whom does Hillel Halkin toil?

After reading his magnificent essay in Mosaic on the life and work of Yehudah Leib Gordon, the preeminent Hebrew poet of the 19th-century Jewish enlightenment, I had the same thought I’ve had over and over again since I was a teenager: unending gratitude that someone out there has done the world a favor by opening up the genizah of Hebrew literature and curating its treasures. As usual, that someone is Hillel Halkin.

In his gift to us of Gordon’s work, much of which has never been translated before, Halkin includes his own new rendering of one of Gordon’s best-known poems: Le-mi ani ‘amel? (“For Whom Do I Toil?”). Its title borrowed from Ecclesiastes, the work is the lyrical lament of a Hebrew poet who has chosen to write in a language no one speaks, to an audience that barely exists. Halkin is correct that the poem is “self-pitying” in the extreme and dramatically overstates the dire straits of Hebrew literature at the time. Yet there is something deeply honest and utterly familiar about its central anxiety, which still resonates today for anyone who spends time thinking about Jewish literature, past and present. It’s an anxiety that I suspect Halkin has felt himself.

Neither Gordon nor Halkin would be wrong to feel this way. The style of Gordon’s Hebrew poetry sounds archaic today not merely in the way Edgar Allen Poe sounds archaic, but far more so, since Gordon and even his successors decades later were working in a language that had not yet been fully revived as a vernacular. This makes their work rather alien even to native Hebrew speakers—a fact so obvious that it has been parodied on Israeli television. One of the funnier sketches from the Israeli comedy show Ha-Y’hudim Ba’im (“The Jews are Coming”) features another foundational Hebrew poet, Ḥayim Naḥman Bialik, at an open-mic poetry slam in 1925 Tel Aviv. In the sketch, Bialik attempts to recite his lyrical laments of East-European pogroms but is soon shouted down by “fans” who insist on hearing one of his nursery rhymes instead—the only scraps of his poetry that most Israelis today recognize or understand.

Of course, a sketch like this is itself the most profound and powerful answer to Gordon’s question. Without knowing it, Gordon toiled for the creation of a society where Hebrew speakers can crack jokes for a mass Hebrew-speaking audience about the outdatedness of Hebrew poetry—whose very outdatedness only further illustrates just how successful the project of reviving Hebrew was. One could call this unprecedented cultural rebirth and growth a miracle, except that that would undermine all of Gordon’s toil.

Gordon’s question, “For Whom Do I Toil?,” becomes a bit harder to answer when it comes to translations of those foundational Hebrew writers. But that question has an answer, too.

I am not among those to whom Hebrew could come naturally. I have no Israeli relatives, never lived in Israel, and never attended a Jewish school. Nor am I Orthodox (though I don’t think that would have helped). The only thing distinguishing me from every other American—or, frankly, Israeli—Jew who has never heard of Yehudah Leib Gordon is that, for reasons I don’t fully understand myself, I became obsessed as a teenager with any literature that tried to bring ancient beliefs to life, however ironically, in the modern world. After exhausting the meager supply of this material in English, I found my way to modern Hebrew literature. That makes me sound like a bold explorer of foreign tongues, but I was nothing of the sort. My intrepid guide was Hillel Halkin.

I don’t really remember how it started, because these works very quickly became so central to my entire understanding of literature and life that it feels strange to recall a time before I had even heard of them. It probably began with A.B. Yehoshua’s magnum opus Mr. Mani, a novel about six generations in a Jewish family which I devoured at sixteen and have since taught in my courses at multiple universities. Or maybe it was Yosef Ḥayim Brenner’s Breakdown and Bereavement, set in pre-World War I Palestine, on which I later wrote part of a college thesis. Or maybe Meir Shalev’s Blue Mountain, or Mordecai Feierberg’s Whither?, or S.Y. Agnon’s A Simple Story, or poetry by Leah Goldberg, or stories by Shulamith Hareven, or—well, you get the idea. These are just a few canonical monuments of modern Hebrew literature, all of whose authors owe their careers to those earlier modern Hebrew writers like Yehudah Leib Gordon who toiled at a task that seemed potentially pointless.

These artists and their readers are the people for whom Gordon toiled. As for me, I discovered all of them the only way I possibly could at the time: through Hillel Halkin’s ingenious translations. Not only were those translations beautifully wrought in ways that preserved all of the idiosyncrasies of each writer’s style, but they were also unfailingly annotated with door-opening introductions, endnotes, and anything else a curious reader required to appreciate them. The translations were what ultimately inspired me to learn the language to the level where I could read these works in the original, along with others that Halkin hasn’t translated (yet).

In his typically brilliant exposition of Gordon’s work, Halkin explains the Hebrew poet’s strange choice at one time to advocate Jewish immigration to America rather than to Palestine as a simple recognition of reality: at the time, compared with what America offered, immigration to Ottoman Palestine seemed a fool’s errand. Poetry and reality are two different things, Gordon understood, and only idealists could be expected to live by the former.

If Halkin’s recently reissued 1977 memoir, Letters to an American Jewish Friend, is any indication, he, too, is not unfamiliar with this central tension and perhaps disappointment that afflicted Gordon’s life. Moving to Israel from America over 40 years ago, with no impetus beyond the desire to live a “maximal” Jewish life, Halkin writes in Letters about his profound disappointment that more American Jews have not joined him on this journey. Yet, like Gordon’s, the body of Halkin’s work is itself a recognition of a current reality that, while short of ideal, demands not rejection but assistance from intrepid guides.

Today, thanks in no small part to Gordon’s labor in forging a new language for Jewish creativity, we have a thriving Hebrew-speaking state. And thanks in no small part to the realities Gordon saw long ago, we also have a large American Jewish community that lives its life in English. Linking these communities requires essential and often thankless toil, an enormous part of which is the creative and laborious act of translation itself—translations that can become, for me and many others, not an endpoint but a beginning.

Mr. Halkin, my American Israeli Jewish friend, you and I have never met. But I have this to say to you: you toil for me. Thank you.