The Flaws in Both Universalism and Nationalism 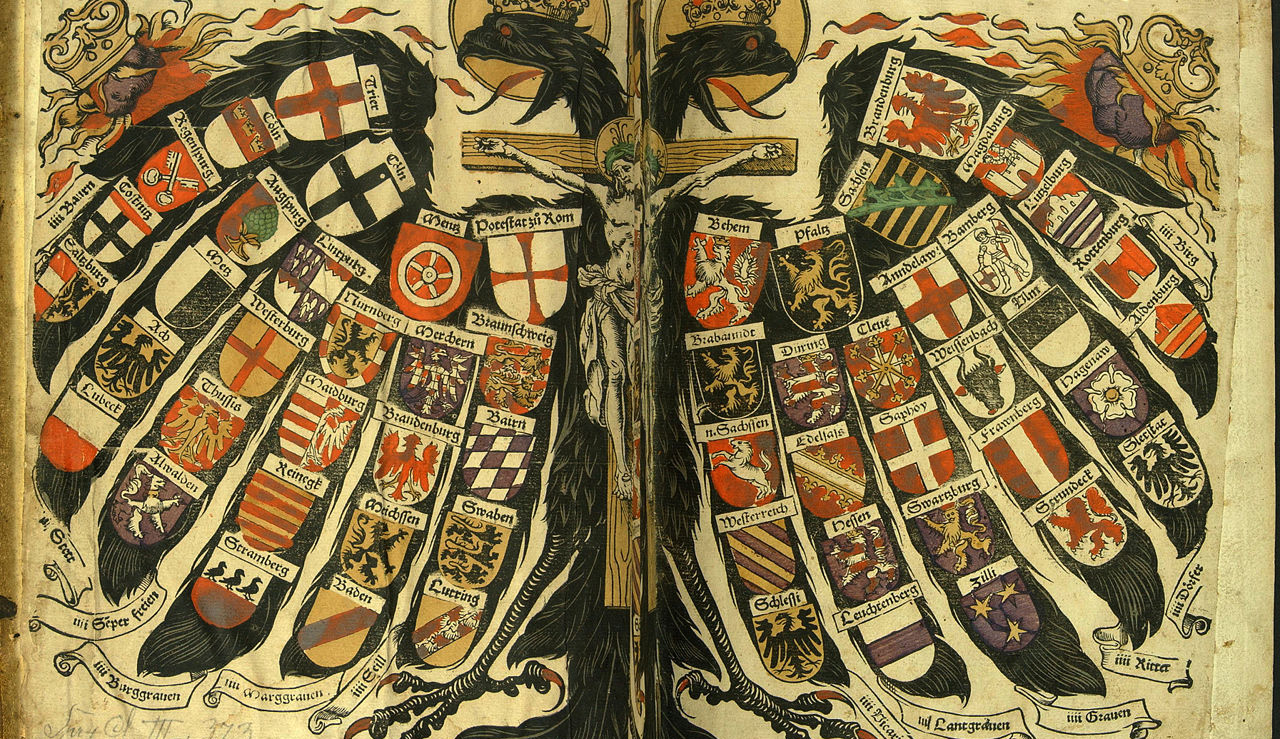 A hand-colored woodcut showing the states of the Holy Roman Empire. By Hans Burgkmair, cut by Jost de Negker, 1510. Via Wikipedia.


Walter Russell Mead is a distinguished fellow at Hudson Institute, professor of foreign affairs and humanities at Bard College, and editor-at-large of the American Interest. His books include Special Providence: American Foreign Policy and How It Changed the World (2004), God and Gold: Britain, America, and the Making of the Modern World (2007), and The Arc of a Covenant: The United States, Israel, and the Fate of the Jewish People (forthcoming 2017).

Yoram Hazony’s “Nationalism and the Future of Western Freedom” is a bold and fiery piece. In what follows, even as I intend to question and complicate his argument, I remain grateful for its genuinely refreshing spirit of intellectual combat.

Hazony characterizes the idea behind modern nationalism, what he calls the “Protestant construction,” as at root a biblical idea. Although he doesn’t specifically mention it, I can’t help being reminded of the familiar story in Genesis of the tower of Babel (or “Baybul” as I was taught to pronounce it in the American South). That story perfectly encapsulates how I think about nationalism and universalism. On the one hand, the ambition of the tower’s builders was a noble one: they wanted to reach heaven. What could be a more appropriate human aspiration? On the other hand, that ambition challenged the majesty of God, trying to take for all mankind something that by right belonged only to the Creator, to the Transcendent.

The result of this human initiative is that God scatters the people into different nations and “confuses” their once-single language into many. Again: on the one hand, you might think of this as a kind of reward: independent nations, each able to determine its own unique identity and pursue its own purposes. On the other hand, you might—along with the displeased God of Genesis—see it as a punishment, and as a caution.

What this story powerfully suggests to me is that, as is often and perhaps usually the case in human affairs, we have here two alternatives—let’s call them, respectively, cosmopolitan universalism and national self-determination—and they’re both flawed. Really, deeply flawed: vulnerable not just to mistaken impulses but to vile and ugly deformations.

Thus, in the case of cosmopolitan universalism, you can get to the point where a king or emperor or supreme leader like Nebuchadnezzar decrees that anyone who doesn’t pay obeisance to the realm’s designated idol will be subject to punishment up to and including execution. That has surely happened more than once in human history, and there are significant numbers of people today who would like to make it happen again.

As for the case of national self-determination—that is to say, Hazony’s preferred antidote to cosmopolitan universalism—just look at the map of Eastern and Central Europe. In the late 19th century, four large multi-national, multi-confessional states—the Ottoman, Russian, Austrian, and German empires—dominated the region. A little over a century later, after the deaths of a “mere” 100 million or more people in war, and after another 30 million were driven from their homes, we have 40 or 50 nice, democratic, nationalist, ethnic states. History suggests that there are a great many problems with the national state as well.

One of those problems, indeed, came up in connection with the recent Brexit vote, which Hazony lauds as a game-changing blow against universalism and for national independence, in this case Britain’s. But Britain isn’t a nation. It’s a cosmopolitan civilization, and Brexit (assuming it goes through) heralds not the imminent independence of a nation but the secession of one multinational state from a larger multinational entity, in this case the European Union. What’s more, given the overwhelming Scottish vote in favor of remaining in the EU, Brexit may yet lead to another secession, that of Scotland.

Very often, both in the past and today, nations try to do on a small scale what cosmopolitan empires do on a large scale. Say we’re going to have a Hungarian nation. That nation will display cultural unity and stand for Hungarian principles and Hungarian ideas, and by the way will also ensure that Hungarians—and we know who really is and who really isn’t Hungarian—will secure the good jobs and formulate policy and conduct the intellectual debate. Just like the medieval popes and emperors who, as Hazony shows, strove to create a uniform Christian republic of Europe, nationalists often strive to achieve the same kind of holistic social construction within their borders and among the members of their nation.

This brings up the problem that nationalist movements rarely respect the interests of minorities, and specifically the interests of Jews. Today’s Scottish National party is hardly a philo-Semitic organization, making it not so clear that the Jewish interest will be served by the still-unfolding events in Britain—any more than it was served in every instance by the emergence in the late 19th century of national states, complete with their renewed spirit of national and ethnic pride, in Central and Eastern Europe. Think again of Hungary, and of the considerably less-than-effusive love for the Jewish people expressed by Hungarian nationalists. Or think of Tsar Alexander III, whose concern to create a nationalist Russia, deeply rooted in the character, language, and culture of the Russian people, was in part conditioned on not allowing the country’s Jews to live where they weren’t wanted or otherwise to taint the ethno-nationalist wholesomeness of Russian society.

None of this is to deny—and here is a point on which Hazony is not only right but in today’s climate positively courageous to speak out—that there is a true, positive, ethical content to nationalism. In the 1840s, the rich Czech burghers living in nice houses in Prague were made to feel guilty about the condition of the poor and uneducated Czech peasants—their brothers and sisters—laboring without reward and with no one to help or care for them. In many a European country, nationalism became a vehicle through which solidarity was and still is extended beyond the immediate family to a larger group of fellow human beings.

In the classical liberal tradition, especially in its Anglo-American version, the person who speaks most eloquently to this ethical component of nationalism is Edmund Burke. Although, or perhaps because, he was Irish and operating in an English setting, Burke was highly attuned both to the need for deep cultural roots, which allow a political society to grow organically without losing touch with its own past, and to the need for political action lest the status quo become frozen into immobility. In practice, Burke argued, the slogan should be festina lente: make haste slowly. If you go too fast and get ahead of yourself, notably by trying to incorporate more universal and cosmopolitan values into the political structures of your life, you’ll lose your political balance and your society will begin to fall apart. From the standpoint of a traditional society, the ideal is to move gradually, incorporating, for example, elements of tolerance and diversity while simultaneously nurturing your identity and its roots.

To me, Burke’s seems a useful way to think about these matters. And on that account I would once more strongly contend that we cannot look either to nationalist particularism or to cosmopolitan universalism as the answer to the human condition. Both have important capacities; both are subject to terrible temptations. The real task of politics and statecraft is to determine what—in a particular situation, in a particular circumstance, at a particular time—is the right blend.

In this connection, and speaking as a friendly outsider, I’ll once again adduce the example of the Jewish community. Within that community, one sees the same tension playing itself out: the tension between those who understand their Jewish vocation in terms of loyalty to universal ethical norms and those who understand it in terms of the need to preserve and cultivate communal identity, including Zionist identity. This tension within the Jewish family, rather than representing any betrayal of its vocation as a people commanded to be a light unto the world, is actually an aspect of that vocation. That is to say, Jews exemplify with special vividness what it means humanly to face two alternatives, neither of which really works and yet within and between which we have to make our lives.

Yoram Hazony has rendered an important service in exposing the dangers lurking in any attempt to inject ethical ideas into politics. Inevitably, one introduces universal strictures that can quickly morph into an intolerant, domineering, spirit-crushing orthodoxy. As someone who teaches at one of the most left-liberal colleges in America, I live in the shadow of this orthodoxy, and I know whereof I speak.

But the interesting thing is this: look how quickly everyone in Britain seems to have gotten over the trauma of Brexit. You now have a very unruffled Theresa May presiding in a quite exemplary fashion over a Tory cabinet. On the continent, Jean-Claude Juncker has duly given his annual State of the European Union address. Things are moving on. So far, at least, the disruption seems to have been much less profound than, for good or for ill, the election of a President Trump could be in the United States.

In other words, and regardless of what Britain does or doesn’t do, we may be seeing the laws of political gravity reasserting themselves. And this suggests in turn that rather than one of our two alternatives being good and the other evil, neither is really sustainable; human nature requires them both. If political leaders steer too hard in one direction, or the cultural environment at a particular moment moves too far too fast, the pendulum begins to swing. In Europe we’ve witnessed 50 years of determined cultivation of a single European identity and a single European super-state—and now, all over the continent, we’re seeing a massive reaction.

There may thus be reason to hope that, in the end, the head of some universal cosmopolitan empire is not going to put up an idol and demand that we all bow down to it. If, however, such a terrible thing should happen, I’d like to think I’d have the courage to stand with Shadrach, Meshach, Abednego, and Yoram and say to the new Nebuchadnezzar: be it known unto thee, O king, that we will not serve thy gods, nor worship the golden image which thou hast set up.

The Flaws in Both Universalism and Nationalism
1. Essay

Nationalism and the Future of Western Freedom
2. Response

The Post-World War II Era Is Over. What Now?
4. Response

In Defense of Our National and Religious Traditions