FDR Called Operation Torch a "Great Jihad of Freedom." It Was Nothing of the Kind.

Instead of acting as liberators, the WWII Allied forces in North Africa ended by propping up fascism, and leaving the Jews to their fate. 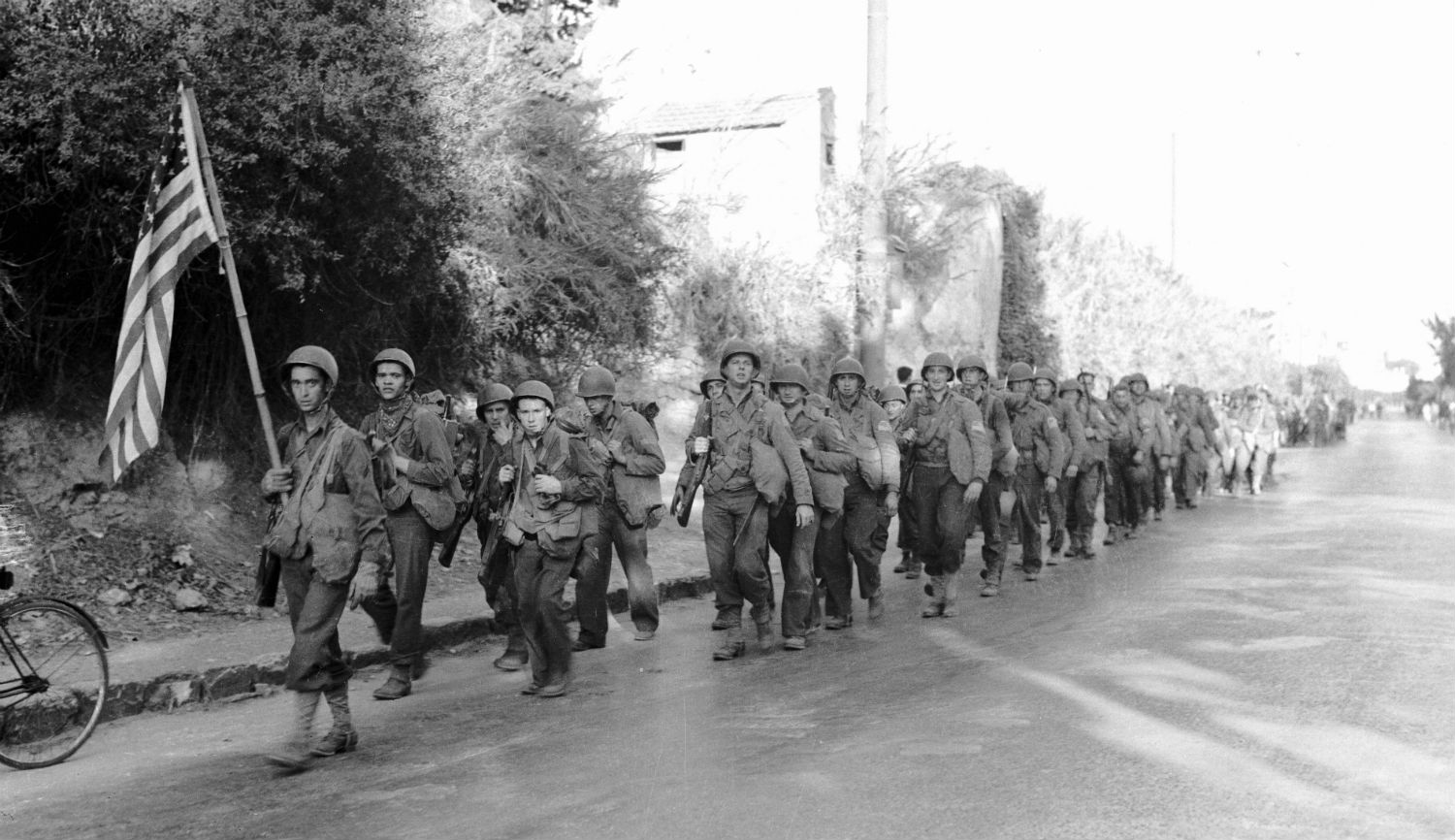 American infantry marching through Algiers after landing during Operation Torch in 1942. Bettmann.

Response
David Pryce-Jones
About the author


David Pryce-Jones, the British novelist and political analyst, is the author of, among other books, The Closed Circle: An Interpretation of the Arabs and Betrayal: France, the Arabs, and the Jews.

Robert Satloff has written eloquently about Jews and Arabs whose interaction has been the stuff of history in the Middle East for long tumultuous years, with more of the same certain to come. His book Among the Righteous (2006) does justice to Arabs who, during the German occupation of North African countries in World War II, saved Jews from concentration camps and probable death just as other Righteous Gentiles did in Nazi Europe. The war had knock-on effects well worth exploring; in “The Jews Will Have to Wait,” Satloff now directs our attention to another one.

The blitzkrieg of 1940 had left Hitler in control of France. The northern part of the country was to remain under the rule of the military and the SS. Marshal Philippe Pétain, a World War I veteran by then in his eighties, had taken the lead in negotiating the cease-fire and the French surrender. Hitler allowed him to be head of state in the truncated southern part of France, with its capital in the spa town of Vichy.

Nominal at best, Pétain’s independence was conditioned on his willingness to collaborate with Hitler. In whichever half of the country they found themselves, Frenchmen at all levels had to decide to what extent they would lend themselves to Nazi purposes. Collaboration was to make a great many of them accomplices in the Holocaust.

It was a strange anomaly that Vichy France, the very emblem of defeat, still ruled the French empire and was therefore implicated in issues of power politics. One such issue was Benito Mussolini’s campaign to build an Italian empire in North Africa, with the prospect of dispossessing the French in Tunisia, Morocco, and Algeria. Mussolini appealed to Hitler for help. In February 1941, Field Marshal Rommel was appointed to command in North Africa, and within a short time his troops were only 60 miles from Alexandria. Most North African Arabs took the defeat of the French as final, and with the Germans now in striking distance of Cairo, they assumed that they would soon be seeing the backs of the British as well.

As in France itself, the Jews in the Arab lands of the French empire were to be left to their fate. “Reducing the rights of the Jews”—who had been stripped by Vichy of their French citizenship—“did not increase the rights of Muslims” is the remarkable statement made by Messali Hadj and quoted by Satloff as one among “multiple examples of Arab public figures who during this period sided with Jews.” An Algerian nationalist and a sometime Marxist, Messali Hadj was an expert at finding sticks with which to beat the French. Tried in a Vichy court as an agitator, he had been condemned to sixteen years of hard labor.

At that same moment, a very different mission in North Africa was being conducted by Kenneth Pendar, an American intelligence agent, who in his memoir Adventure in Diplomacy (1976) describes the effort to counter by all available means, including bribery, the admiration felt by so many Arabs for Hitler and Nazism. Radio stations kept the Middle East informed about Haj Amin al-Husseini, the mufti of Jerusalem, who had placed himself at Hitler’s service. Fleeing from the British in the middle of 1941, he had passed through Iraq and, in Baghdad, incited the mob for a farhud, the Arab equivalent of pogrom. By the time the British re-established control of the city, several hundred Jews had been killed. The Arab world knew what to expect when Haj Amin moved on to Berlin for the duration of the war, consorted with Hitler and most of the high-ranking Nazis, and accepted German subsidies and arms.

Operation Torch, the invasion of Arab North Africa by American and British forces, occurred on November 8, 1942, thus coinciding with the British victory over Rommel at El Alamein. The German army was not invincible after all. German intelligence had also mistakenly concluded that the hundreds of ships and troop transports assembled for Torch in Mediterranean waters were bound for Malta.

Torch also put paid to Pétain. The German army was bound to take over Vichy France and secure the northern shore of the Mediterranean. Pétain had a last chance to escape, to denounce collaboration, and to redeem himself as a patriot and figurehead of resistance. But apparently he feared that if the Germans caught him on the run, they might maltreat him. “Dieu, que nous sommes lâches aujourd’hui,” is the diary entry of one of his adjutants. (Good Lord, how cowardly we are today.) For the French of subsequent generations, Pétain’s continued collaboration perpetuated a legacy of shame and division.

One of Torch’s three landing grounds was Algiers. In that city, a medical student named José Aboulkher led an armed group consisting mostly of Jews but with some Arabs as well. Described rather grandly by Satloff as the leader of “a Jewish resistance movement,” he and his men ensured that the landing was peaceful. More significantly, Pétain’s deputy, Admiral Jean-François Darlan, happened to be in Algiers. A dubious character, more Hitlerite than collaborator, Darlan ordered Vichy forces not to oppose the landings on condition that he and the Vichy regime stay in power.

Instead of acting as liberators, the invading Allied forces ended by propping up the same old fascism, complicit in the ideology they were supposed to destroy. When Darlan was murdered shortly thereafter, a young Frenchman alleged to be a royalist was executed for the crime, but Darlan’s friends and foes were so ill-defined and interchangeable that several conspiracy theories still have currency.

Fought in deserts, the war in North Africa mostly passed by the local inhabitants; there was no large-scale devastation to show for it. But attitudes and assumptions were another matter. Arab nationalist claims for independence and self-government were the very same claims the French made for themselves. In what way was French occupation of Algeria different from German occupation of France? As for the British in Africa, and notably in Egypt, they paid little or no attention to the fact that they had survived Nazism thanks in large part to the efforts of others. In any case, their authority had been so weakened that they could no longer maintain imperial policy and principle.

The history of American foreign policy demonstrates how little American culture has in common with Arab culture. A particular delusion in Washington has been that Arabs want the same things as Americans. Torch, according to President Roosevelt, who above all was responsible for launching it, was a “great jihad of freedom.”

Nothing of the kind: it was the continuation of a European war conducted outside Europe. Roosevelt and the State Department in his day believed a truism—that the end of the old European empires would be the obvious remedy for the Arabs’ lack of freedom. Left to themselves, Arabs would surely modernize and democratize, as reports from American ambassadors affirmed and would continue to affirm year after year.

Instead, the Arabs have engaged in a succession of wars, invasions, and civil wars, ending in the breakup of several states. The United States, for its part, has sometimes accepted the imperial role of policing, as in Lebanon in 1958 or Iraq in 1991, not to mention Afghanistan, and has sometimes rejected it, as in Torch and, these days, in other Middle Eastern trouble spots. And who is to say which course of action is the more effective, or what the moral ought to be?

FDR Called Operation Torch a "Great Jihad of Freedom." It Was Nothing of the Kind.
1. Essay

The Jews Will Have to Wait
2. Response

How WW II American Leaders in North Africa Learned to Disregard the Interests of Jews
4. Response

Why the Jews of North Africa Had to Wait
5. Last Word