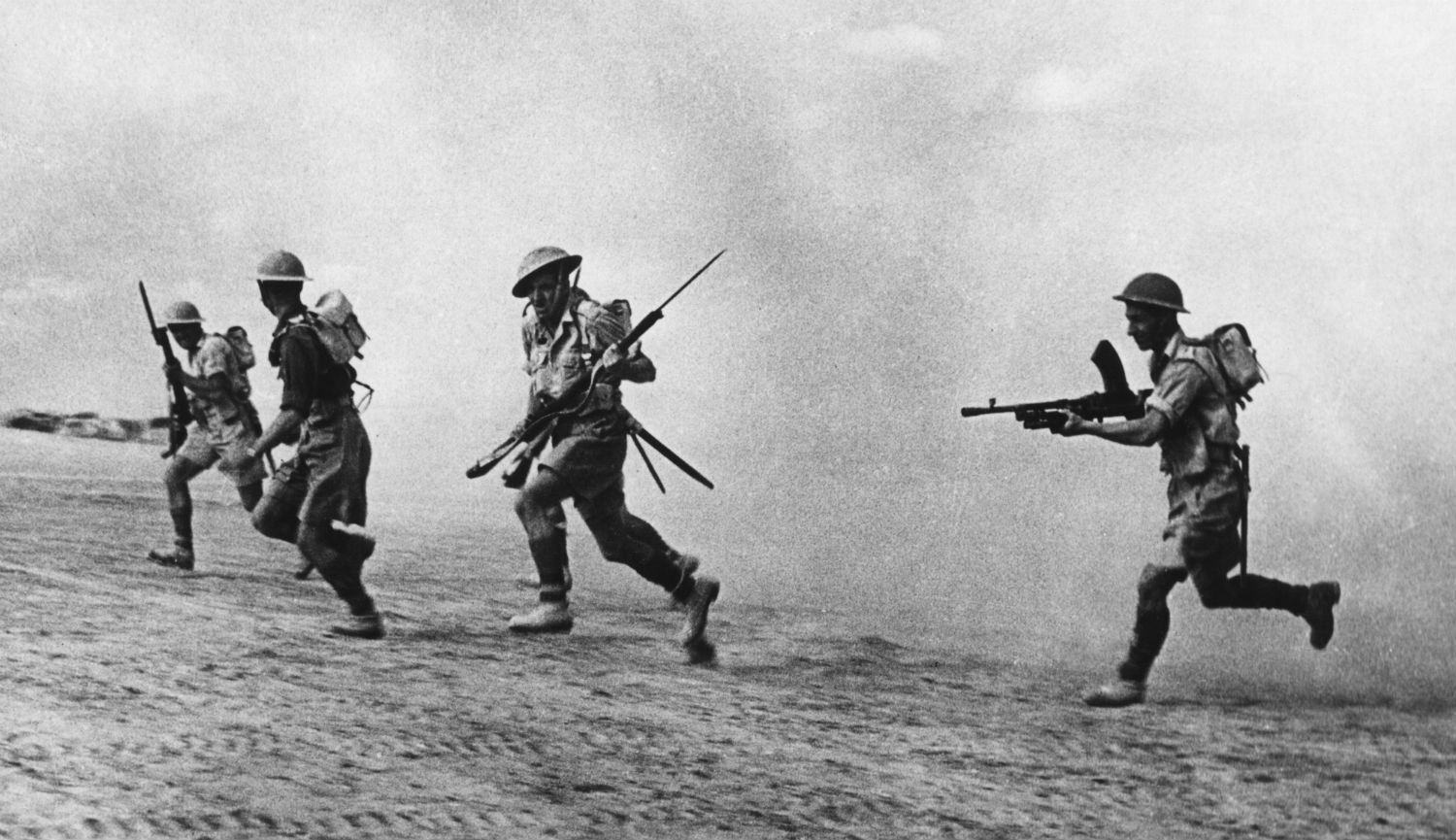 Robert Satloff’s essay in Mosaic on American policy toward the Jews during and after the Allied North Africa campaign in the autumn of 1942 is a story of betrayal. As he relates, a handful of Algerian Jews played a decisive role in the huge November 1942 invasion of the region, facilitating the seizure of the city of Algiers in an early-morning uprising conducted by a heroic underground of over 300 Jewish fighters. But, Satloff goes on to argue, the Americans failed to use their successful seizure of North African territory to alleviate the plight of Jews who had suffered under the previous, collaborationist, Vichy-directed French authorities.

Instead, the Americans conducted themselves with “deceit and duplicity.” Turning their backs on the anti-Vichy insurgents and the rest of North African Jews, U.S. policy makers launched “an instrumentalist strategy toward Arab lands—prioritizing partnerships with friendly strongmen.” This short-sighted vision, Saloff concludes, has “by and large . . . governed America’s relationship with the region ever since.”

I have no quarrel with one of Satloff’s principal concerns: to put the wartime story of North African Jewry on the map, highlighting continued post-Torch persecution and the Vichy-ordered dispatch of many Algerian Jews to concentration camps, “remote sites of arduous forced labor where torture was common and death by hunger, thirst, exposure, and mistreatment a daily occurrence.” Once the Allies took control, Algerian Jews, humiliated at having been stripped of their French citizenship by the pre-Torch regime, had expected a speedy restoration of their rights and the removal of Vichy-imposed discriminatory laws. What greeted them, after the successful landings in November 1942, was something else. The title of Satloff’s essay, “The Jews Will Have to Wait,” sums up United States policy as led by Robert Murphy, chief adviser to General Dwight Eisenhower, the commander of Torch. And Murphy, Satloff rightly observes, was not alone.

Why the wait? It is here that I part company with some of Satloff’s observations, both about the situation on the ground after Torch and about the long-term shadow that the wartime policies of anti-Jewish American officials may have cast over Washington’s policies in the Middle East. To understand the sources of the harsh responses to Jewish appeals, one needs a somewhat wider vision than Satloff’s largely Algeria-centered perspective. One especially needs to examine how America’s president, Franklin D. Roosevelt, and the sometimes sharply disagreeing officials around him viewed the Middle East of the day.

The first point to stress in this connection was that the successful surprise attacks in North Africa were not followed by any easing of Allied fears about the future of the region as a whole, even though a portion of it was now under the control of the liberating forces. To the contrary, the Allies soon realized that they were not going to achieve their anticipated speedy drive eastward into Tunisia and the destruction of General Erwin Rommel’s German forces there. Instead, the Germans were able quickly to build up a formidable military presence in Tunisia and to supply their forces with substantial equipment and weapons dispatched through the North African ports still in Axis hands. This dashed FDR’s hopes for an early end to the war.

Adding to this challenge was another major concern on everyone’s list of priorities: namely, the issue of Palestine. This is something on which Satloff spends very little time, and yet, naturally, it was what Chaim Weizmann, Stephen Wise, and likeminded Jewish notables concentrated on when they met with FDR months after Torch. It was also where the minds of American wartime planners went when they thought about what Washington might or might not do for the Jews—a subject on which they disagreed sharply among themselves,

To put this Jewish issue into perspective, it helps to bring into our frame of reference the catastrophe that the yishuv, the Jewish population of Palestine, only narrowly averted just as the Allies were coming ashore in Torch. Numbering roughly 500,000 at the time, considerably more than the 330,000 Jews of North Africa, the yishuv faced a terrifying prospect. In the autumn of 1942 the British seemed on the edge of collapse in the eastern Mediterranean. It appeared likely that Rommel’s Afrika Korps, moving eastward, would break into Egypt, capture Cairo, take the Suez Canal, and then enter Palestine. And we now know what the Germans had in mind: the slaughter of the Jewish population. Heinrich Himmler’s SS even had a special unit assigned to that task, preparing itself in Greece and awaiting the expected German victory in North Africa.

Jewish fighters in Palestine, among them today’s eminent Israeli historian Yehuda Bauer, calculated that while they might harass the oncoming German forces, in the end they would be forced to stage a suicidal last stand on the slopes of Mount Carmel. What saved the Jews of the yishuv—providentially but inadvertently—was the British defeat of Rommel and the turning of the tide at El Alamein, in a part of the North African desert war in which the Americans did not participate directly.

As this one example suggests, there was good reason why Palestine, at the opposite end of the Mediterranean from the landing places of Torch, occupied the center of so much strategic thinking about the Jews, and why the Jewish situation in North Africa “would have to wait.” And not the Jewish situation alone. In the wake of the Allies’ realization that their expected, rapid drive into Tunisia was not going to materialize, huge consequences flowed for grand strategy elsewhere. Notably, an eventual Allied invasion of France, which many in London and Washington had hoped to launch in the summer of 1943, would now have to be put off until 1944.

Timing, in other words, was at the center of things, and it certainly preoccupied Roosevelt. Crucial in this respect was another theme largely neglected by Satloff but highly pertinent to the future of the region: namely, the threatened entry of determined Arab anti-Zionists, particularly in Palestine and neighboring territories, in a fight against the Jews and their Anglo-American allies. Within Roosevelt’s administration, particularly in the anti-Zionist State Department, officials cautioned everyone who would listen about the potential for violence if American policy were to support the Jewish cause.

Vichy holdovers after Torch, of whom there were many, also constantly warned of the dangers of an Arab uprising. General Auguste Noguès, for example, the French military commander in North Africa and a top colonial administrator, told Eisenhower that quelling such an insurrection in Morocco would require a force of 60,000 Allied soldiers. Similar signals came from the British in Palestine.

For their part, Allied military men, including Eisenhower, made little distinction between Arabs in North Africa and those in Palestine. At the level of command and decision, the issue struck soldiers and policy makers alike as part of a single age-old quarrel of Arabs and Jews. As Eisenhower later recalled, in a passage from his memoirs quoted by Satloff: “Arab unrest, or even worse, open rebellion, would have set us back for months and lost us countless lives.”

All of this intelligence played a role in American domestic politics, the field in which Roosevelt felt most comfortable. Throughout the period of Torch and its aftermath, the president had much to be worried about on that front. In their book FDR and the Jews, Richard Breitman and Allan J. Lichtman cite official guidelines for Voice of America broadcasts: “Roosevelt’s political enemies at home would exploit any evidence that might show the president mismanaging the war effort, lengthening the fighting, and increasing American casualties.”

I take Satloff’s point that Vichy holdovers and American advisers may well have exaggerated in their ominous forecasts of Arab violence and the costs of containing it. Possibly so, at least in hindsight. At the time, however, the dangers of an Arab insurgency seemed real enough, and FDR, politically cagey and constantly dissembling, was hardly immune to dire warnings of this kind. His priorities were military, and to achieve military goals he would have to balance the often-contested claims of liberated populations. Would you like to be responsible for the death of 100,000 soldiers?, the president once pointedly asked Rabbi Abba Hillel Silver, a prominent American Zionist leader.

Jews in the region had to wait, then—and had good reason to be bitter and angry over the fact. War is a cruel arena. Looking back, hoping to understand why people did what they did, I believe it’s important to maintain the widest possible view.