Jewish Historians Could Stand to Borrow a Trick from the Greeks

Curiosity—the most extraordinary of Greek traits—is a better prescription for writing Jewish history than is trying to breathe into it a “Jewish spirit.” 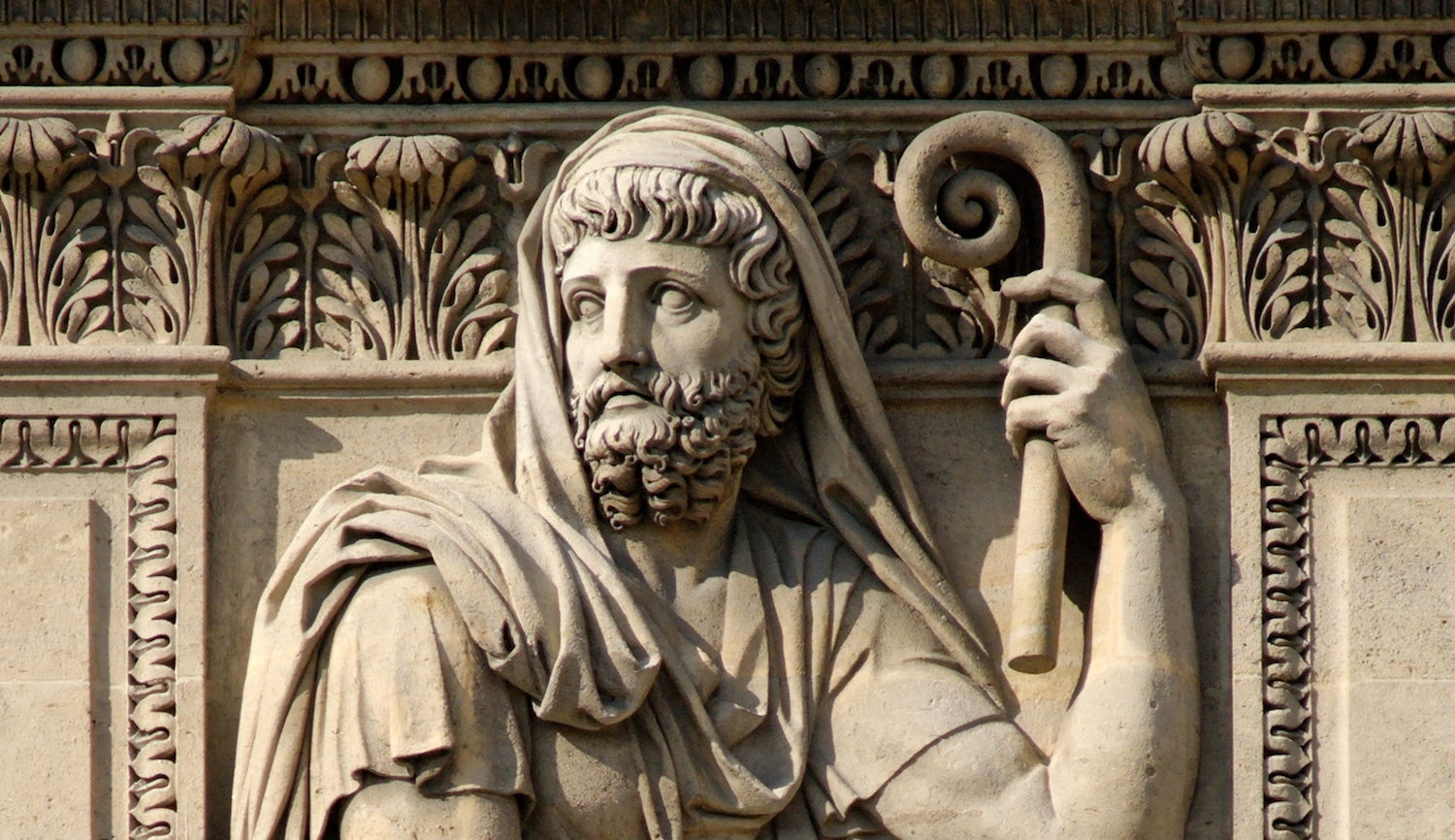 An 1806 relief of the Greek historian Herodotus by Jean-Guillaume Moitte currently in the Louvre, Paris. Wikipedia.

I don’t see how one can say, as Eric Mechoulan does in “What is the Meaning of Jewish History?,” that “the very idea of history was a Jewish invention.” What Jews invented was the idea that history has a divine purpose. Apart from Israel’s relationship to God, and God’s relationship to other peoples as a means of punishing or rewarding Israel, the history of anyone or anything never interested the authors of the Bible or the rabbis in the least.

This is precisely Yosef Yerushalmi’s point in Zakhor, a book cited more than once by Mechoulan. We owe to the Greeks—and specifically (or at least his work is the genre’s first surviving example) to Herodotus—the idea of history as the embracing study of past events that seeks to describe and understand them, the connections among them, and the motives and mores of those involved in them. When Herodotus begins his account of the ancient world in the 7th, 6th, and early 5th centuries BCE, and of its wars between the Greeks and the Persians, he writes that he is doing so

so that human achievements may not be forgotten in time, and great and marvelous deeds—some displayed by Greeks, some by Barbarians—may not be without their glory; and especially, to show why the two peoples fought with each other.

The key words here are human and why, and the key rule is the impartiality with which human actions and conflicts are to be subjected to investigation without being swayed by an identification with one side or another.

This, not the Hebrew Bible’s Judeocentric (and wonderful) accounts of pre- and post-diluvian man, the patriarchs, and the lives of the judges and kings of Israel, was the beginning of the writing of history as we know it, and it could not have happened without that most extraordinary of all Greek traits: curiosity. An endless, insatiable curiosity about the world and its peoples and a desire to know everything knowable about them—a passion for fact—was what most distinguished the Greeks from the other peoples of antiquity, the Jews included. Without it, neither history nor science, also a Greek invention, would have come into existence.

Eric Mechoulan ends his thought-provoking essay with a call for “breathing a Jewish spirit into [the] ‘mere’ fact-finding” of a historian’s work. His putting “mere” in quotation marks, I take it, is his acknowledgement that, in the writing of history, the facts are more than just a springboard for arriving at conclusions about them. They are all-important in themselves, and a commitment to them, regardless of where or to what conclusions they may lead, is the mark of the honest historian whom Mechoulan speaks of in—quite rightly—separating a serious scholar like Benny Morris from fraudulent practitioners like Avi Shlaim, Ilan Pappé, and Shlomo Sand.

But of course, in history as in science, facts are never enough. There has to be an interpretation of them, a point of view that gives them shape and meaning. Mechoulan contends that contemporary Jewish historians have failed to provide these, and that their work does not help—does not wish to help—its readers to understand the purpose of Jewish existence. The time has come, he writes, “to reclaim the field of meaning” by “breathing a Jewish spirit” into the writing of Jewish history.

Although I agree with Mechoulan that most contemporary Jewish historians, in their academic approach to their subject, fail to address vital Jewish concerns, I’m skeptical of his proposed remedy. Let us say, for the sake of the argument, that we are convinced of the need to “breathe a Jewish spirit” into the writing of Jewish history. What exactly, however, is a “Jewish spirit”? What, in the assembling and assessing of facts that the writing of history entails, does infusing them with such a spirit involve? How do we tell it apart from what is not a Jewish spirit? What criteria are we to use?

Unfortunately, whether because this a discussion he would rather postpone to another time, or whether because he has no answers, Mechoulan does not address the question. As far as I can see, it is unanswerable—or rather, it has as many answers as there are different opinions concerning what Jewishness is or should be about. Mechoulan hints that his own point of view is that of a religious Zionist. For example: “Needed are historians who can reconcile collective Jewish memory with scholarly Jewish history, the sages’ approach with the secular Zionist approach.”

But surely, as Mechoulan would be the first to admit, Jewish history can be written from an anti-Zionist religious or an anti-religious Zionist point of view, too, as well as from other perspectives. If an ultra-Orthodox Jew, say, writes a factually accurate history of modern Jewish life in which he argues that Zionism was a betrayal of Jewish tradition, or an anti-religious Zionist historian maintains, while similarly respecting the facts, that Zionism has failed to fulfill its historic task of redefining the Jewish people in purely national-territorial rather than religious terms, shall we say that their work lacks a “Jewish spirit”? On what grounds? Because, although they care about Jewish life as much as we do, their sense of what it should be like differs from our own? This doesn’t seem a productive approach.

I’m troubled, too, by Mechoulan’s assertion that “Jewish history cannot be written like the history of any other people.” Why can’t it be written like the history of any other people? Is it because Jews are unlike any other people? That’s certainly true; we may very well be the strangest people the world has ever known. But no people is exactly like any other, and others besides Jews have been unique in many ways—Americans, for example. Writing American history may challenge concepts of nationhood and national identity based on European models, but it certainly doesn’t call for different methods or standards of gathering and evaluating facts than does writing the history of anyone else. I don’t see why Jewish history should be an exception.

Or is it because Mechoulan doesn’t believe that Jewish history should be thought about naturalistically but rather that Jewish historians should adopt the traditional Jewish view that we are a God-chosen people with a divine mission to perform, and that this is an adequate explanation of events in our past for which natural causes needn’t be sought? I fail to see how history, as we have come to think of it since Herodotus, can be written with such an assumption.

As a secular Zionist, for want of a better term, I want Jews to be, all in all, more like other people, not less like them. The kind of Zionism I believe in came to return us to the family of nations, not to drive one more wedge between us and it. Traditionally, we Jews have always been highly self-involved—too much so for our own good. I see no point in encouraging this trait further in the writing of our history.

One of the differences between secular and religious Israel is that secular Israelis tend to be intensely curious about the world around them while religious Israelis are often not very curious even about themselves. Why should they be, when Tradition tells them all they need to know?

Let’s be curious! Let’s be curious about ourselves, about the world, about our place in it, about our past, about how we came to be where we are. Let’s follow our curiosity to whatever sense of purpose or meaning it does or doesn’t take us. This strikes me as a better prescription for writing Jewish history than does trying to breathe a “Jewish spirit” into it.

Menachem Wecker
August
What Is the Meaning of Jewish History?
3. Response

Jewish Historians Could Stand to Borrow a Trick from the Greeks
1. Essay

What Is the Meaning of Jewish History?
2. Response

The Contrast Between the Bible's Idea of History and the Modern Idea
4. Last Word