In the face of great challenges, I’ve seen many of them lit up by a sense of moral purpose and historical duty. 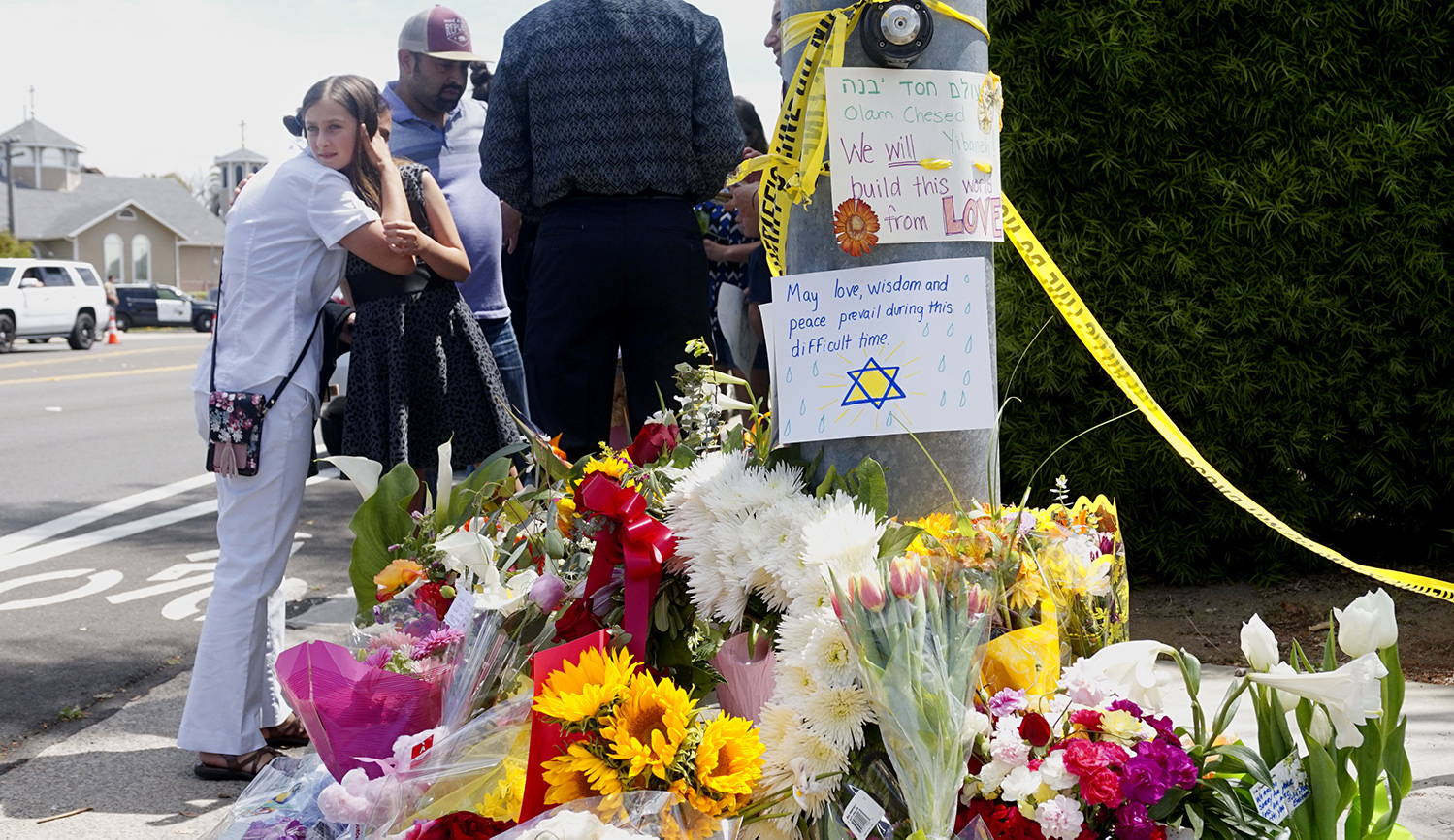 Mourners and well wishers leave flowers and signs at a memorial across the street from the Chabad of Poway Synagogue on Sunday, April 28, 2019 in Poway, California, one day after a teenage gunman opened fire, killing one person and injuring three others. SANDY HUFFAKER/AFP via Getty Images.

Response
Bari Weiss
About the author


Bari Weiss is the author of How to Fight Anti-Semitism. She is a former opinion editor and writer at the New York Times.

Growing up, like so many Jewish children of my generation, I would hear stories of the old country, where Jewish nightmares happened in broad daylight, where grandparents with numbers on their arms endured unspeakable persecution.

But whereas a Jewish child growing up in Argentina or Poland or Ethiopia might have heard such stories as a warning, I heard them as a kind of American affirmation. They were another way of saying: The horrors of history happened over there. We are in the new world. And here can never become there.

Perhaps that sounds naive. But consider the fact that, like millions of American Jews, I was raised in exactly the milieu that my friend Daniel Gordis describes in his provocative new essay: liberal-minded, optimistic, and allergic to the suffering and sadness that previous generations of Jews accepted as a matter of course.

We in America had lost what the writer Joachim Fest, writing about Germany’s Jews before the war, dubbed an instinct for danger: “Being overwhelmingly governed by their heads, they had, in tolerant Prussia, lost their instinct for danger, which had preserved them through the ages.”

German Jews in those years had their particular reasons for forgetting. We had ours. After all, we were born into the luckiest Jewish diaspora in history, allowing us to thrive in ways that our ancestors, for whom oppression was as reliable as gravity, could never have dreamed of. It all seemed to fit together: our Jewish experience appeared to us to grow directly out of American history.

America’s founders may have been guilty of moral hypocrisy, but the ideals encoded in the nation’s constitutional tradition were exceptional. We understood that the freedoms enjoyed by the Jews of the United States were nourished by truths that were at once revolutionary and unalienable.

It didn’t hurt that the people who articulated them venerated the Hebrew Bible and understood themselves in light of Israelite history. They, too, were a small band of iconoclasts fleeing tyranny; they, too, had crossed a wilderness; they, too, were determined to worship their God freely in a promised land. So fully did early American leaders identify the cause of the United States with the example of biblical Israel that Benjamin Franklin—among the least pious of them all—wanted the image on the country’s great seal to show Moses parting the Red Sea. It was Lincoln who put it perfectly: Americans, he said, were the “almost-chosen people.”

This unique admixture of Americanism and Judaism was leavened, in many households like mine, with other heady articles of political faith. We enjoyed a rock-solid belief in our place inside the Democratic party (my own father’s conservatism was a family punchline), in the promise of American meritocracy, and in some vague idea about the arc of history bending toward justice. This worldview was, at almost every turn, vindicated by the incredible successes of American Jews in the post-war boom period. And it lulled the majority of American Jews to sleep.

I didn’t realize we were sleepwalking. Few did. The fact that I was relatively knowledgeable about the history that buffeted my people in other times and in other places made me even more confident in the exceptional nature of the American diaspora. I viewed the knifings and opprobrium that was visited upon Jews in places like Paris with sympathy, but also, if I am honest, with a bit of pity. Unlike them, we in the U.S. were set apart from the cruelty of history.

How good it felt to be swaddled in that cozy mythology. How wrong we were to think it would last.

The important question Gordis raises in his essay is how we can find the resilience that will now be required of us if we are to remain fully ourselves in a country now shorn of its illusions, in post-Charlottesville, post-Pittsburgh, post-Poway, post-Jersey City, post-Monsey, post-Brooklyn, post-intersectional, post-modern America. In other words, what moral and psychic resources do American Jews need in order to live firmly inside history?

Gordis offers two answers: Zionism, in which the hard-headed realities of life in the Middle East make resilience necessary, and the worldview of traditional Judaism.

Other respondents will surely be more well-versed in Jewish theology and liturgy than me. But Gordis’s argument here did put me in mind of the novelist Dara Horn’s devastating criticism of the theology she roots in the biblical book of Lamentations, in which Jews understand their physical suffering as a function of their own moral shortcomings before God, and not, say, the superior military might of their enemies. She argues that this theological understanding of Jewish oppression—as self-inflicted—has served as a kind of national coping strategy. It’s allowed Jews to explain their oppression to themselves while clinging to the idea of a just God.

Perhaps this theological view allowed for spiritual resilience. But, as Horn argues, it is also undeniably a “historical illness.” And just as the destruction of the Temple led to a fundamental restructuring of Jewish theology and practice, surely the upheavals of the 20th century, especially the Jewish return to political power, might lead to a similar reimagining.

The example Gordis notes of two American Conservative rabbis refashioning the liturgical poem Eli Tsiyon to focus on the coronavirus rather than on the destruction of Jerusalem is an example of how this is done badly. But that doesn’t mean that the attempt at a more relevant and truthful understanding of Jewish suffering isn’t a worthwhile effort.

At the heart of Gordis’s argument lies something bigger than American Jewry’s loss of their ancestors’ resilience. Absent Jewish particularism in the form of Zionism or serious Judaism (that is to say, something more than political progressivism or New Age spirituality dressed up in Hebraic language), the overwhelming majority of American Jews are destined to fade away. Or at least that is the implicit argument I hear Gordis making in his essay. Put more bluntly: most American Jews seem willing to give their distinctive inheritance away to the surrounding culture rather than embracing their countercultural destiny. About that I worry Gordis is entirely right.

There have been two successful post-war political answers to the Jewish question: the particularist nationalism of Theodor Herzl and the promise of American liberalism. In America, Jews found themselves among that “almost chosen people” which offered them the chance to maintain a tribal, Jewish identity and at the same time be fully American. In the late 19th century, prominent political theorists and practitioners expected both projects to fail. That they have not is a testament to American exceptionalism and to Jewish ingenuity.

One of the most famous skeptics of American liberalism was Herzl himself, who believed that America, like Europe, would ultimately fail to protect its Jews. Many of my friends in Israel increasingly believe that, despite an unexpectedly long-lived American Jewish experiment, Herzl was right. They believe that America doesn’t have what it takes—or at least that most American Jews don’t. Does Gordis agree?

I love my Israeli friends, and I love Israel. But I can’t believe they are right about America, at least not yet.

It’s not that I want to prove Herzlians wrong, but Jewishness as we know it today exists because of the tension between our attachment to the Land of Israel and our experiences in the Diaspora. And there has never been, even with our present problems, a healthier diaspora than the American one. The American-Israeli axis still, I believe, balances the Jewish world in a way that no other conceivable arrangement can. Chop off the American end, and I worry very much that the whole thing will start to wobble.

A final note: in my travels over the past few years to dozens of communities across the country, I have seen heart-breaking examples of American Jewish fragility. But I have also seen the very resilience that Gordis is looking for, and it gives me tremendous hope. These leaders are almost always young Jews, and very few would call themselves Orthodox. In the face of great challenges, they have been lit up by a sense of moral purpose and historical duty.

It turns out that young people still hunger for meaning, and the old fear that telling them the truth—that Jewish life can be challenging—is not actually a turn-off to them but a call to arms. It is in their passion and clarity that I see the budding of a new American Jewish identity, one that I want to do everything in my power to fight for.