Sure, its politics are chaotic. But on several of the most important issues, Israel today is less divided than it has been in a long time. 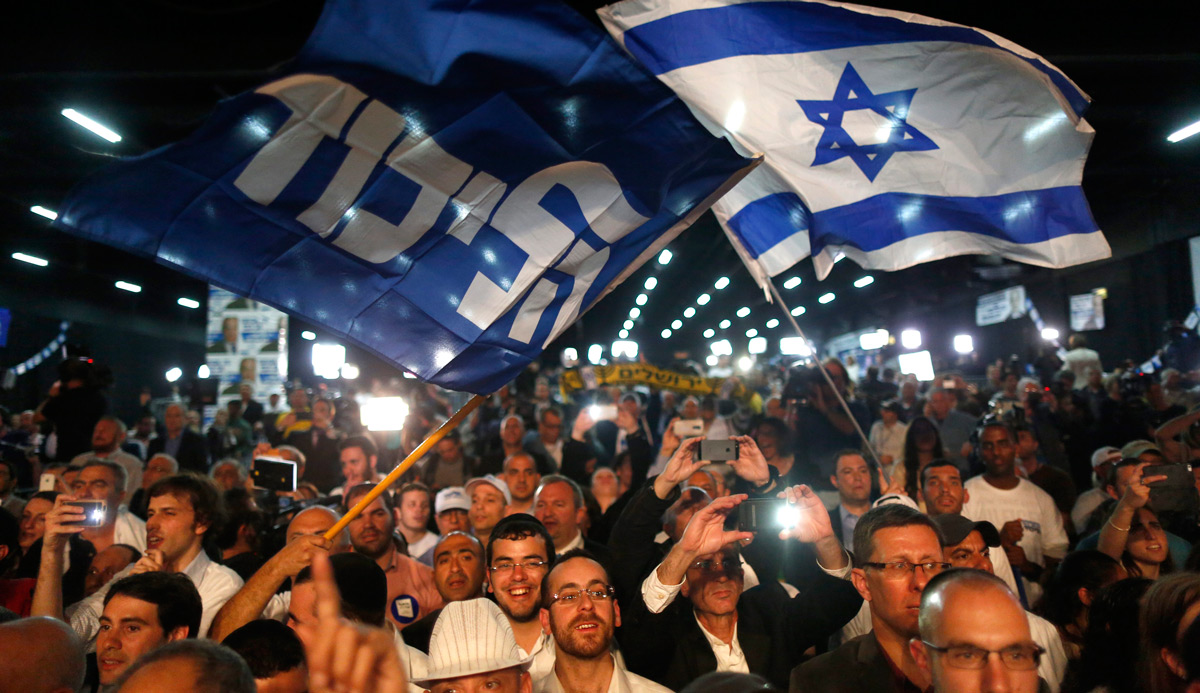 Israelis at an election rally in Tel Aviv in 2015. ABIR SULTAN/epa/Corbis.

From skydiving to windsurfing, Israelis are notorious aficionados of extreme sports. As the events of 2015 have demonstrated, and not for the first time, they also take their politics the same way.

First came a bitter election campaign and predictions of the possible or indeed likely defeat of Benjamin Netanyahu and his Likud party. That was followed by the shock of the March election itself, indicating a landslide victory for Likud. But then came six weeks of acrimonious negotiation as, landslide or no landslide, Netanyahu only barely secured a coalition government with the thinnest possible majority. Since the coalition controls only 61 out of 120 seats in the Knesset, it may be only a matter of time before the government falls and the country has to start the process all over again.

Edward Grossman’s wonderful, poetic account of contemporary Israel certainly takes note of the frenetic and indeed chaotic character of its politics. According to Grossman, an ever-greater “Balkanization” has fractured Israelis into a dizzying array of special-interest groups. He specifies some of the major fault lines: between Ashkenazim and Sephardim, between religious and secular, and, perhaps most interestingly, between the iPhone generation and those who can still remember getting their foreign news from the International Herald- Tribune—a day late.

For Grossman, these stark social and political divisions couldn’t come at a worse time. Just when the country faces the dire existential threat of a nuclear-armed Iran, and desperately needs both unity and clarity of purpose to confront that threat, it seems less capable than ever of mustering them.

There is indeed much truth in Grossman’s portrait of Israeli society. Yet, on the political level, it is not at all clear that the country is as Balkanized as he fears. Indeed, in my view contemporary Israel offers signs of an emerging consensus that transcends the sociological divides he so ably characterizes.

Not that Grossman is alone in his analysis. To the contrary, after the recent election, Israeli pundits both left and right expressed versions of a similar argument—though rarely so eloquently. To some, what the election confirmed was the division between, as they put it, “Greater Tel Aviv”—secular, cosmopolitan, internationalist—and the rest of the country, ever more religious and nationalistic if also internally divided. Thus, according to Ari Shavit in Haaretz, there are now “two Israels,” sealed off in “bubbles,” each blind and deaf to the political views of the other, with damaging consequences for both domestic and foreign policy. Others have focused on the “tribal” motivations of ethnicity and religion, their influence on Israeli voting patterns, and therefore on the politics of elections and governance.

Yet the vagaries of coalition politics do not negate the massive, underlying fact made manifest in the election of 2015: namely, that the Israeli public as a whole now leans decisively to the right. Reading Shavit on the “two Israels,” for instance, one would gain the impression that Tel Aviv and its suburbs, where around 20 percent of the country’s Jewish population resides, are as resolutely and uniformly left as Jerusalem and its suburbs are right. But is this so? In the areas where Netanyahu’s Likud or other center-right parties prevailed in the March election, they usually did so by decisive margins. By contrast, cities near Tel Aviv like Herzliya and Raanana—epicenters of allegedly progressive Israel—gave only fairly narrow victories to the left.

In other words, if a Tel Aviv bubble still exists, politically it is far less “left” today than Shavit suggests. (Think of San Francisco and Palo Alto only leaning Democratic.) Moreover, the right’s win would have been even bigger if Yesh Atid, the party of the former television personality Yair Lapid, were not arbitrarily assigned to the left side of the spectrum. True, as finance minister in Netanyahu’s last government, Lapid did advance some favored left-wing economic ideas (like rent control); but when it came to national defense, he raised no serious objections to the policies of Netanyahu’s Likud.

Indeed, the realm of national defense is where the right-leaning character of the electorate is most manifest. During the campaign, the left may have spoken of rejiggering the peace process with the Palestinians, but it hardly minimized the threat from Iran. For their part, the non-left parties, whether representing Ashkenazim or Sephardim, either expressly affirmed or made known their support for the core security principles also expressed by Likud: a united Jerusalem, no harmful concessions to the Palestinians, a strong arm against Iran. Although, for the time being, Avigdor Lieberman has kept his right-wing, Russian-supported Yisrael Beiteinu party out of Netanyahu’s coalition, he has not dissented from Likud’s national-security policies. Nor, as Grossman notes, has any of the Zionist parties, left or right, stinted on the basic need for a strong defense.

And there are signs of consensus in at least two other areas as well.

First is the economy. Across its ethnic and political divides, and despite significant disagreement over means and ends, the Israeli public is united in the desire for some new way forward in this sphere. Over the last decade, Israel’s GDP has grown at an average of 4.5 percent a year: a strong record in a period that elsewhere saw the greatest recession in living memory. But while the consumer economy has witnessed strong growth, economic policy-making has lagged woefully behind. No wonder the public is dissatisfied with the status quo and expresses its dissatisfaction at the ballot box. Favored solutions are hardly uniform: the left is seeking a return to an allegedly gentler, more egalitarian Israel; some populist parties want to shackle or destroy the banks; others, grouped mainly around the prime minister, seek structural reform and deregulation. But on the need for significant change, there is consensus.

Second, there is the lessening divide between secular and observant Jews. In some ways, going back to the days of the founding, that divide has embodied the most pronounced and enduring split in the Zionist and Israeli psyche. At my Labor Zionist elementary school in Toronto in the 1990s, our Israeli teachers informed us that, in the era of Oslo, the main threat to the Jewish state no longer emanated from Arab intransigence but lay instead in the specter of civil war between “the secular” and “the religious.” More recently, the heated debate over a proposed law enshrining the nature of Israel as a Jewish state has reminded many of the extent to which Judaism continues to be a marker of social division.

Israel is not a “religious” nation today. Yet the 2015 election proved that the appetite for a naked public square has significantly waned. Indeed, the perceptive Tomer Persico, a left-leaning blogger, wonders whether the left’s conspicuous and long-flaunted secularism may not have had something to do with its string of defeats at the polls. It’s hard not to wonder along with him. From the noticeable uptick in public Sabbath observance, even in places like Tel Aviv, to the public embrace of religious practice by pop stars, to the flourishing of study programs catering alike to the intellectually curious and the culturally or spiritually seeking, Judaism is much more evident in the precincts of main-street Israel than it was a generation ago. Meanwhile, the religious Zionist (or national-religious) movement continues to grow in influence, confidence, and number.

The 2015 election and the events following it have not ratified any particular policy with regard to the role of religion in the public sphere; what they have revealed is a growing sentiment that Judaism shouldn’t be excluded.

Israel today remains raucous and domestically disputatious. Some pine wistfully for the early days of the state, when, as they like to imagine, civic comity reigned under the benign leadership of the Labor party and the unions it controlled. Others invoke the 1990s: the halcyon days of the Oslo accords, Yitzhak Rabin, and the benign glow of the Clinton White House.

Actually, however, Israel at the time of Oslo was far more divided than today—and for good reason. One need only recall the ferocious battles over the agreements themselves, over the ideological significance of the subsequent assassination of Yitzhak Rabin, over the meaning and direction of militant Palestinian nationalism, over Israel’s regional role in the post-Soviet Middle East—and over the astonishing rise of the ultra-Orthodox (ḥaredim) as a factor in the country’s electoral politics and public life. No clear blueprint existed for dealing with any of these challenges; honest people could disagree and did, loudly.

Since then, the country has lived through no less daunting times. It survived an exceptionally bloody intifada that crushed the hopes of many dyed-in-the-wool peaceniks; saw a withdrawal from Lebanon and a disengagement from Gaza followed by the rise respectively of Hizballah and Hamas; and has watched with alarm the steady growth and influence of Iranian power. Meanwhile, it has also undergone tremendous social change with a rapidly modernizing economy and the dissolution of the secular socialist faith of many of the country’s founders.

As a result of this turmoil, lessons have been learned, or at least sentiments have changed—and coalesced. However Balkanized Israeli society appears to be, there is clearly a growing consensus on three political principles, which the parties ignore at their peril: a strong national defense; some new way forward on the economy; and an increased role for Judaism in public life. Across many of its ethnic and religious differences, the Israeli public has made these general priorities clear. And in this large and saving respect, Israel today is less divided than it has been in a long time.

Finding Meaning While Living on the Edge of a Knife
4. Response

Another Kind of Unity
5. Last Word

Israel: Vibrant and Resilient, or Mediocre and Decaying?