The image of a “French republican idyll” masks a history of repeated anti-Jewish prejudice, and worse. 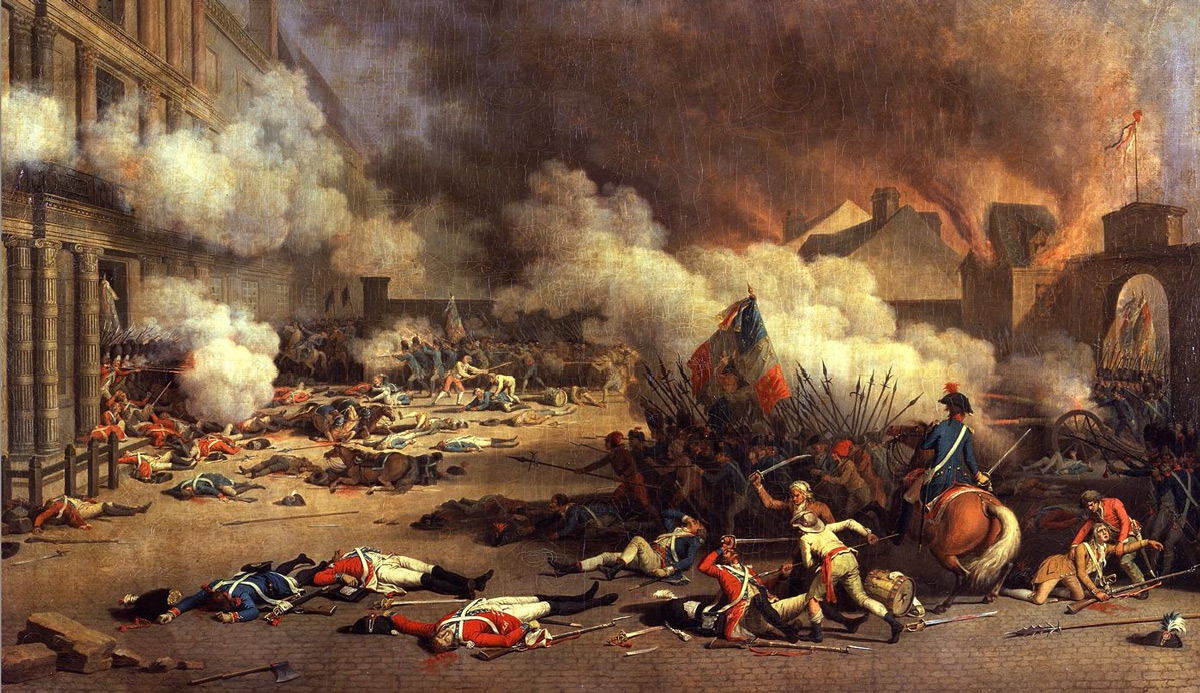 From Storming of the Tuileries on August 10, 1792 during the French Revolution. Jacques Bertaux, 1793. Wikipedia.

Response
Joshua Muravchik
About the author

At the outset of his very interesting and provocative essay, Alain El-Mouchan quotes French Prime Minister Manuel Valls: “If 100,000 [French] Jews leave [for Israel], France will no longer be France. The French Republic will be judged a failure.”

Will France’s Jews depart en masse for Israel? Should they? If they do, will France still be France? These are disturbing questions to which I do not have the answers, and which may be unanswerable. But I would like to offer a number of thoughts and reactions, mainly of a historical nature, and some in the form of further questions.

Let us recall that in the first half of the 20th century, one-quarter of the Jews living in France were murdered in the Holocaust, with French connivance. Was France still France after that? If so, then it is hard for me to see how the departure of one-quarter of today’s Jewish population—not for Auschwitz but for Israel—would constitute the end of France.

But El-Mouchan, like Prime Minister Valls, has something more specific in mind. For both of them, that something, in El-Mouchan’s words, is “the French republican idyll, one of the most attractive and promising chapters in the history of mankind,” and one hallmark of this idyll was France’s “exceptionally open and welcoming” posture toward the Jews. That idyll, says El-Mouchan, has now “reached the beginning of the end.”

Historically speaking, however, this image of the “French republican idyll” is itself in need of qualification, being overly, well, idyllic with respect both to France and to France’s relation to the Jews. El-Mouchan traces the origins of the idyll to the French Revolution, but that great upheaval soon devolved into tyranny and bloodletting, and it took nearly another century, marked by repeated episodes of violence and finally another internecine bloodbath—for which the glorious Sacré-Coeur basilica was erected as a kind of national repentance—before a republic was established. That republic endured seven decades before expiring at the hands of the Nazis, whose task was eased by the ambivalence of the French toward their own regime.

As for the situation of the Jews, it is quite true that the Revolution was a turning point in their legal status and that the French Enlightenment had done much to transform their place in the mind of Christendom. Nonetheless, the subsequent history was ambiguous. El-Mouchan cites the philosopher Emmanuel Levinas’s father, who felt that the Dreyfus affair was notable for the sheer extent of pro-Jewish feeling it elicited. But some knowledgeable historians (including, among others, Yehuda Bauer and George Mosse) have argued that one might legitimately have expected France, given its history of virulent anti-Semitism, to provide the more likely crucible than Germany for the project of annihilating the Jews.

Another qualification: secular republican France, El-Mouchan writes mordantly, was once but is no longer “the place where no one could ever scream in the streets ‘Death to the Jews.’” That place, he adds, “is the state of Israel.” So it is. But another such place is the United States. Dieudonné, the French neo-Nazi agitator who is called a comedian, has been sentenced several times for chortling over the Holocaust yet nonetheless, as the BBC put it, “retains a wide following” in France. In the United States, his act would violate no law and incur no court proceeding, but, except perhaps for private audiences, it would also be unthinkable. America is a place where anti-Semitism is less present than in Europe, where support for Israel remains overwhelming, and where, I might add at the risk of sounding the chauvinist, the best values of the Enlightenment were first and most successfully put into practice.

There is another, even more concrete sense in which, if I understand him correctly, El-Mouchan believes that the flight of a large share of Jews signifies the “beginning of the end” of the French version of liberal democracy. In brief, it is the harbinger of a larger functional breakdown brought about by the impact on France of its burgeoning and poorly or non-assimilated Muslim population. The murders of and assaults on Jews over the past decade, the siege of synagogues and the rampages through Jewish neighborhoods during the 2014 Gaza war, were the work of elements of this population. Indeed, that the destruction of Jewish security in France might be but the first of many hard blows to the liberal order is powerfully suggested by the Islamist slaughter at the satirical magazine Charlie Hebdo.

These are immigrants (and offspring of immigrants) from places that prize sharia law over the values of the Enlightenment—places that themselves have produced no specimens of liberal democracy. It is certainly true that France has failed to integrate its Muslims en masse. But can they be integrated? My answer is that they can be if French society will summon the courage and self-confidence to insist on it.

Often, in other critical situations, the French have mustered greater courage and self-confidence than have other European peoples. And when these qualities have been lacking or insufficient to the need, the Americans have ridden to the rescue—in defeating the Germans, in deterring the Soviets, even in thwarting a domestic Communist danger immediately after World War II. In the current case, however, it is hard to see how the Americans can help.

Self-confidence will be needed to insist on the adaptation of all French subjects to the norms of society. Courage will be needed to enforce law and order in banlieues and other locales where legal authority has lapsed, and to make Jews feel safe in the streets and Metros and in their cultural institutions. That job is not beyond the capacity of determined policing, even if it is not possible, in France or anywhere else, to prevent every act of terrorism.

What I found most disturbing in El-Mouchan’s portrait of French society was his observation that, in contrast to the forthright example set by Prime Minister Valls, “most French politicians have gone out of their way to avoid so much as mentioning the words Islam, Islamism, or jihadism in connection with the upswing of anti-Semitism or with the declared convictions of its main perpetrators.” This attitude, which breathes the spirit of appeasement, bodes ill for any project to reverse the current drift. And in this regard, under President Obama’s stubborn resolve to obscure the source and motives of Muslim violence, America, far from helping, compounds the problem.

As El-Mouchan notes, it was de Gaulle who executed France’s volte-face during the 1967 war from being Israel’s closest ally to becoming its harshest West European critic. The great hero of the Resistance might be considered the farthest thing from an appeaser. He was, after all, a great nationalist and realist. But these poles are not so far apart. The French defeatists of the 1930s were themselves often nationalists and realists. And de Gaulle was disarmingly frank about his thinking. “The political and strategic importance of the [Middle East] is all the greater now . . . thanks to oil,” he wrote, and therefore “I naturally intend to reestablish our position [in] Cairo, Damascus, Amman, Baghdad, and Khartoum.” Exemplifying the progression from anti-Zionism to anti-Semitism which has grown increasingly common in recent years, de Gaulle responded to criticism of his maneuver by lashing out against the Jews, calling them “an elite people, self-assured, domineering”—probably the most egregious anti-Semitic utterance by a West European head of state since World War II.

Indeed, the issue of appeasement is what makes the predicament of French Jews a microcosm of the challenge that also besets Israel and the Jewish people as a whole. The heart of the world’s hostility to Israel and Jews today lies in simple arithmetic. For each Jew on earth there are 100 Muslims. In France, the ratio is one to ten. While many or most Jews may see it differently, the prevailing view in the Muslim world is that its conflict with Israel is a conflict of faith. The Jews of France, should they emigrate to Israel, will find welcome and shelter there, and more. But the problem posed by masses of aroused enemies, and the natural impulse of outsiders—realists, appeasers, or whatever—to tilt to the numerically stronger and more determined party will continue to confront the Jews, and their supporters and friends, for a long to come.