American readers might consider the flight of French Jewry to be as foreign as foie gras. But there are warnings to be heeded even by them. 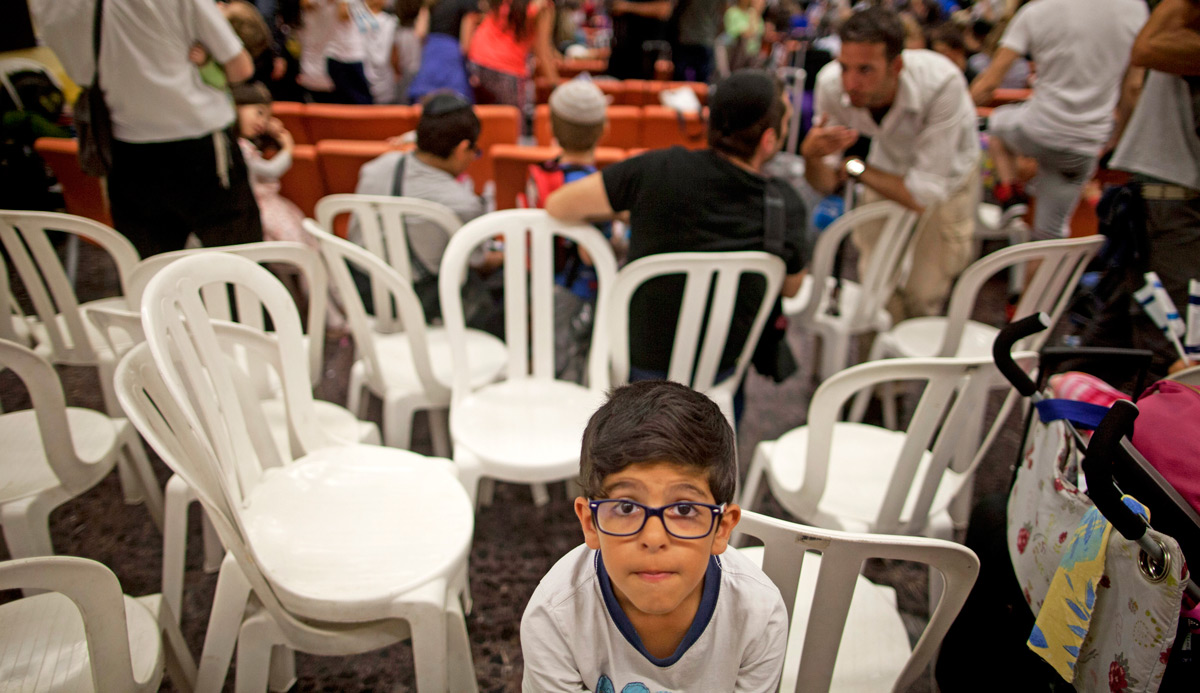 A boy during a welcoming ceremony at Ben Gurion airport in Tel Aviv after arriving on a flight from France on July 16, 2014. Photo by Lior Mizrahi/Getty Images.

“The Tel Aviv shoreline has turned into the French Riviera,” says a colleague who spends his summers in Israel, and I hear it’s the same along the beaches of Netanya. French immigrants who haven’t gravitated toward the Israeli coast are raising property values in Jerusalem and Modi’in. Until now, mass immigration to Israel has come from countries lowest on the freedom index. What are we to make of the current flight of Jews from the country that gave us enlightenment, emancipation, religious tolerance, political liberty and freedom of thought?

That is the main question of Alain El-Mouchan’s essay on the rise of anti-Jewish violence in France and consequent increased Jewish movement to Israel. Analyzing the causes of departure, he charts the familiar debate between those who urge flight and those—including French Prime Minister Manuel Valls—who urge French Jews to stay. As it happens, this very predicament is the subject of A Happy End, a new play by Iddo Netanyahu, younger brother of the prime minister of Israel. The play is about a Jewish family that struggles with the decision of whether to leave Germany in the 1930s. A Happy End doesn’t have one.

Yet history is not repeating itself. When Israel’s prime ministers—Ariel Sharon in 2004 and Benjamin Netanyahu in 2015—invite the Jews of France to make their home in the Jewish homeland, they are offering an improved quality of life and a potentially higher standard of living. Most importantly, from the perspective of this Mosaic essay, Israel invites French Jews to enjoy the rights to life and liberty and the pursuit of happiness that are no longer available to them as citizens of France.

The greatest value of “The Twilight of French Jewry, the Twilight of France” lies in its shift of focus from the emigrating Jews to the society that, in betraying them, has betrayed itself. Anti-Semitism points at the Jews in order to deflect attention from the problems that beset the larger society. We fall into its trap when we similarly focus our own attention on weighing appropriate Jewish reactions to anti-Semitism rather than on the perpetrators of aggression and on the government that encourages or tolerates it. Naturally, Jews ought to do whatever is in their best interest, but those concerned with the world as a whole must concentrate on how anti-Jews figure in a country’s political landscape. Looking beyond the Jewish question to “the very special relationship that obtained between Jews and the French Republic in its heyday,” El-Mouchan sees how the current failure to eradicate anti-Semitism once again threatens the political foundations of France—“once again,” because the fall of the Third Republic in 1940 was likewise triggered by an assault on only the Jews.

American readers might consider all this as foreign as paté de foie gras and, in fact, El-Mouchan mentions the United States only glancingly when he discusses French strategies of avoidance, to the point where French authorities and the French media refuse to identify openly Islamist perpetrators as Muslims or their targets as Jews:

This refusal to identify either the culprits or their victims by their proper names—a refusal typical also of the Obama administration—has perversely combined with the swift posting of police and military guards at Jewish institutions to make Jews feel that at best they have become “protected citizens” in their own country, reinforcing the idea that they are no longer at home in France but are rather a new kind of dhimmi.

Today’s “new kind of dhimmi” corresponds to the subordinate non-Aryan once cultivated by Nazism in Germany and to the maudit Juif, the accursed Jew, of the Anti-Semitic League and Vichy government in France. In each case, those who aggress against the Jews vent their insecurities by attacking people who function best in free and open competition. Today’s Arab and Muslim assault—rhetorically against Israel, bodily against Jews and Jewish institutions—cloaks a war with the democratic West behind an anti-Jewish offensive that, not so incidentally, also deflects attention from the escalating crises of Muslims and Arabs themselves.

Thankfully, no horrors like the torture of the young Frenchman Ilan Halimi have yet occurred to suggest that America harbors pockets of Muslim youth as depraved as those in France or the Middle East. But while the political poison may not yet have penetrated America as deeply, it is being disseminated here with alarming intensity. In my remaining remarks, encouraged by Alain El-Mouchan’s clarity and eloquence, I want to turn to the American case—different in so many ways from the French case, but ominous enough to give pause.

In at least two respects, I believe that America is becoming more vulnerable to the politics of blame that undermine democracies from within. One is the impress of a twice-elected president who has staked his foreign policy on an alliance with Iran as opposed to Israel. That the leaders of Iran link their promise of “death to America” to their intention of obliterating Israel has merely quickened Barack Obama’s resolve to accommodate the attackers. Some ascribe his behavior to error, others to the so-called school of “realism,” still others to an ideological dislike of precisely the political exceptionalism that both America and Israel represent. Motives aside, however, President Obama has clearly courted America’s Muslim and anti-democratic antagonists at the expense of its strongest allies, Israel foremost among them.

In turn, the Obama administration’s courtship of the mullahs of Iran has entailed an apparent embargo on any effort to combat anti-Israel incitement at home. Important sectors of American society are happily taking the hint. Thus, rather than acknowledging the ruinous legacies of Arab leaders who have denied the Jewish people’s right to its homeland in the land of Israel, U.S.-based Muslim preachers and foreign students, Arabists and Arab lobbyists, and Internet-empowered Islamists blame Israel for the war being waged against it. Some American Christian churchmen, harnessing this culture of resentment, transpose their inherited caricature of the deicidal Jew onto the trendier one of Israeli occupier. For its part, the political left blends its anti-capitalist, anti-religious “internationalism” with support for autocratic, religious, and xenophobic Arabs on the basis of a common opposition to Judaism and Jews. American universities are only now beginning to acknowledge the anti-Israel agitation they have condoned for decades, much of it fueled by professors who teach inverted history and perverted politics.

Related to the president’s trust in purveyors of genocide, and to the implicit license he has given to domestic enemies of the Jews, is, most unfortunately, the frailty of his Jewish constituency—and this is the second respect in which America is becoming more vulnerable to the politics of blame. Singled out as targets by the worst regimes and ideologues, Jews, like it or not, are obliged to confront the enmity that others may ignore. When anti-Semitism began to undermine Europe, that responsibility fell most heavily on European Jews; since the Arab League organized its politics against the Jews’ right to their homeland, it falls most heavily on Israel and its Jewish defenders, most especially in America.

Jews who squander their democratic right to expose and indict Palestinian Arab terror, and who condone the vicious slander of Zionism, betray what I consider their responsibility to America. Of course, all Americans ought to rally against the threat to any one of their minorities, but just as African Americans led the fight against anti-black racism, so Jews are expected to lead the fight against anti-Jewish racism. Many do, but more do not—to their permanent discredit and to the detriment of all.

Unlike in France, being a U.S. citizen has never required obscuring one’s ethnic identification; these days, even candidates for the presidency trot out their black or Hispanic or Indian roots as added reason for trusting them with the leadership of so richly diverse a country. One might have thought that this special dispensation would have fostered in America’s Jews a fearless pride in a homeland that, like America itself , is a font of creative energy and democratic debate—in 40 languages. One had reason to hope that the members of a people historically notorious for its inability to protect its women and children would prize that same Jewish homeland for staving off attacks from enemies occupying territories hundreds of times its size. One also had reason to expect that post-Holocaust Jews would have learned to turn anti-Semitic aggression back against the aggressor. Obama’s Jews may not have been able to prevent him from weakening America, but as an early-warning system of freedom, they were duty-bound to try. Instead they have earned his contempt and history’s judgment.

So far, to be sure, America remains exceptional because most Americans and most American elected representatives in Congress appreciate the shared moral principles and political traditions that align their country with Israel. Moreover, they intuit, even if they cannot fully explain, the degree to which Israel is a proxy for the liberalizing features of Western civilization at large, and therefore the degree to which attacks against it are aimed, in Alain El-Mouchan’s words, at “the idea of a law enforcing universal principles of justice and ensuring civic equality.” For in the end, to repeat, the war on Israel is a war against Western democracy, and against America as its bulwark.

As America increasingly derogates from its leadership of the free world, the alliance with Israel, once upheld as a point of national pride, has become instead a reason for affronting the Jewish state and slighting its concerns. Future presidents will no doubt try to reclaim America’s global preeminence and to reverse the policies that have withered it. But both Americans and their enemies will have seen the cracks in the foundation of what had long seemed so unshakeable a commitment to unshakeable standards, principles, values—and friends.