Compromise for Now, the End of Israel for Later

That’s what Palestinians say they want. What does this bifurcated attitude mean for policymakers? 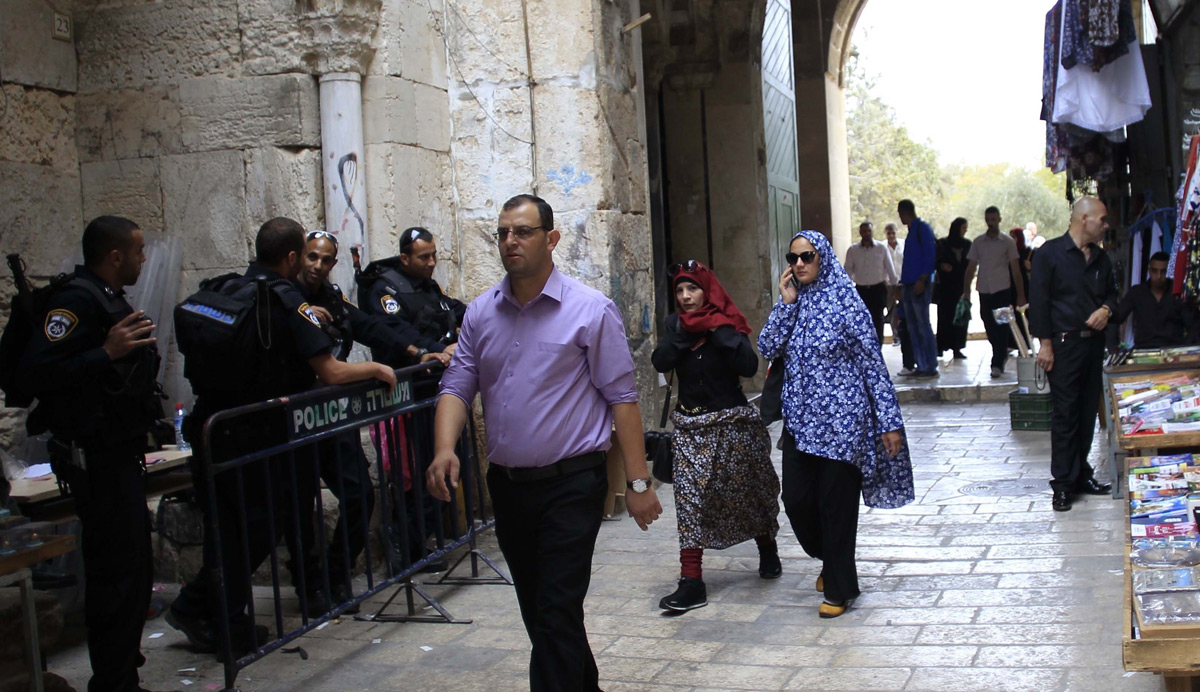 
David Pollock is the Kaufman fellow at the Washington Institute for Near East Policy, where he directs the Fikra Forum blog and the Arabic website.

Against the bloody background of stabbings and other deadly violence in Israel and the West Bank, Daniel Polisar’s thorough analysis of Palestinian polling data, “What Do Palestinians Want?,” makes essential reading for anyone interested in more than just the grim daily headlines. His central point—that the majority of Palestinians in the West Bank and Gaza have long supported “armed struggle” against Israelis—is not only accurate but a fact regularly distorted by media focus on the seemingly “individual” nature of today’s terrorist incidents. Polisar’s conclusions, moreover, are well grounded in exhaustive research into the mounds of survey data that have piled up ever since the first Oslo accords of 1993—which is when I myself started to work with Palestinian colleagues in launching the first scientific polls of the Palestinian population.

Rather than repeating Polisar’s findings, I’d like to begin with a few observations and quibbles, then introduce some recent findings, mainly from a poll I conducted in June, and conclude with what I hope to see in Polisar’s larger study-in-progress on this subject.

First, quibbles. On the basis of survey results and other data, I believe that the reality is in some ways better than Polisar judges and in some ways worse. Better: there is rich evidence that the Palestinian public, when presented with a “package deal,” is considerably more inclined to accept compromise with Israel than when issues are viewed in isolation. This applies even to the most contentious issues like the future of Jerusalem, the “right of return,” or recognition of Israel as a Jewish state. Worse: Polisar accepts the notion that most Palestinians support violence in spite of Mahmoud Abbas’s steady and repeated opposition to it. In fact, Abbas and other Palestinian leaders consistently send a mixed message on this key issue, opposing violence in the abstract while continuing to glorify individual terrorists in official statements, ceremonies, and the media.

More broadly, there are a number of important distinctions to be made that go beyond the scope of Polisar’s valuable essay. One such distinction, to which I have just alluded, is between the Palestinian “street” and the “elite”: the political leadership, the intelligentsia, the moguls of Palestinian media (and social media), and the most prominent Islamic activists. On many tactical issues, including economic relations with Israel and the utility of negotiations, the general public is more moderate than its supposed leaders.

Related to this is the distinction between short- and long-term attitudes. The former are relatively malleable; the latter, surprisingly hardline, especially on the fundamental question of permanent peace versus endless war. Whether or not hardline views might give way if short-term realities improved is a tantalizing yet inherently indeterminate question.

A final distinction concerns the contrasting attitudes to be found among the Palestinian populations in the West Bank, Gaza, and eastern Jerusalem. The overall situations in those three locales are themselves so different as to render questionable the customary practice of lumping them all together.

Each of these distinctions, and others, can be illustrated by the results of my June 2015 poll. I’d like briefly to expound those findings in to order offer some additional perspectives and possible follow-up avenues of inquiry.

Most polling in the Middle East focuses on issues of politics and/or religion. Yet, surprisingly, neither politics nor religion is a top priority for most Palestinians in the West Bank or Gaza. In the former, most people say their top priority is either “making enough money to live comfortably” (44 percent) or “having a good family life” (34 percent). In the latter, the results are similar though skewed a bit more toward family. By contrast, only 14 percent of West Bankers, and 24 percent of Gazans, select “working to establish a Palestinian state” as their top priority. And a mere 12 percent of West Bankers say that “being a good Muslim (or Christian)” is either their first or even their second priority. In Gaza, that figure rises to 19 percent, somewhat higher but still unexpectedly low.

Another surprise: despite widespread theoretical support for boycotts against Israel, most Palestinians in both the West Bank (two-thirds) and Gaza (three-quarters) actually want economic cooperation and say they “would like to see Israel allow more Palestinians to work inside Israel.” A majority in the West Bank and nearly as many in Gaza also say they would “like to see Israeli companies offer more jobs inside” those areas—and over a third in both places, despite the recent deterioration of relations, still see at least some chance of progress in this arena.

What about larger issues of relations with Israel and the peace process? On these, views are very mixed. On the one hand, there is majority support in both the West Bank (58 percent) and Gaza (65 percent)—even if a two-state solution is negotiated—for continuing the “struggle . . . until all of historic Palestine is liberated” and for armed “resistance” as a means toward that end. In the West Bank, 56 percent also support “armed struggle and car attacks against the occupation” (though just 23 percent feel “strongly” that way), and in Gaza such violent tactics are backed by an astonishing 84 percent, among whom 53 percent support them strongly.

On the other hand, there is also surprisingly widespread support for certain key compromises. At the tactical level, perhaps the most stunning statistic is this: 74 percent of West Bankers, and fully 83 percent of Gazans, say that “Hamas should maintain a ceasefire with Israel” in both territories. And even at the strategic level, half or more of West Bankers would “probably” accept compromises on two major issues if doing so might “help to end the occupation” and lead to Palestinian independence. Those issues are, first, “the principle of two states for two peoples, the Palestinian people and the Jewish people,” and, second, limiting the right of return to the West Bank and Gaza, “not to Israel.” Among Gazans, the figures in favor are a bit lower, but still substantial.

Altogether, then, the evidence suggests that today, at least, most Palestinians in both the West Bank and Gaza want a ceasefire and economic cooperation with Israel, and many would also compromise on certain tough core issues for the sake of independence. In still another sign of today’s pragmatic mood, about half the Palestinian public in both the West Bank and Gaza are willing to share sovereignty over Jerusalem—and a large majority of West Bankers (79 percent) say that, “in the current situation,” they would like to see a highway through Israel that bypasses Jerusalem altogether.

But that’s in the short term. For the medium or longer term, many espouse a much more maximalist orientation. Unlike other surveys, my June poll asked respondents to consider three different time frames: the next five years, the coming 30-40 years, and the distant future of a century hence. The results are hardly encouraging.

Indeed, even in the time frame of the next five years, a plurality pick “reclaiming all of historic Palestine from the river to the sea” over “a two-state solution” as the “main Palestinian national goal.” In the West Bank, the margin is 41 versus 29 percent; in Gaza, it is much closer (50 versus 44 percent), but the difference is largely accounted for by the presence of a third option: a “one-state solution in all of the land in which Palestinians and Jews have equal rights.” Among West Bankers, 18 percent go for that option; among Gazans, only 5 percent do.

From a normative perspective, too, Palestinian attitudes are clearly maximalist. In the West Bank, 81 percent say that all of historic Palestine “is Palestinian land and Jews have no rights to the land.” In Gaza, the proportion is even higher: 88 percent. (These figures track closely with Polisar’s.) Of course, many Palestinians, especially in the West Bank, do not believe that the PA actually plans to take over Israel any time soon—as was confirmed by an unusual question included in my survey:

The PA publishes official maps, statements, songs, and poems that talk about all of historic Palestine as belonging to the Palestinians, including cities like Haifa, Jaffa, and Tiberias. Do you think this shows that its real intention is to work toward liberating all of Palestine someday?

In the West Bank, just one-quarter answered yes to this question. In Gaza, around half did.

So much for expectations over the coming five years. Looking ahead to the next generation—that is, 30 or 40 years out—only one-fourth of Palestinians in either the West Bank or Gaza expect Israel to “continue to exist as a Jewish state, while another fourth think it will become “a binational state of Jews and Palestinians.” But 38 percent of West Bankers, along with 53 percent of Gazans, think Israel will no longer exist at all, even as a binational state. Asked how that will happen, they split about evenly between those predicting that Israel “will collapse from internal contradictions” and those saying that “Arab or Muslim resistance will destroy it.”

And the really long-term view, for a century from now? A mere 12 percent of West Bankers and 15 percent of Gazans think Israel will still exist as a Jewish state. In the West Bank, although 20 percent prudently decline to predict so far ahead, a plurality (44 percent) think Israel will either collapse or be destroyed. In Gaza, an absolute majority (63 percent) more confidently anticipate the Jewish state’s destruction or collapse.

For policymakers on all sides, these contrary or even bifurcated attitudes toward the short versus the medium to long term present both an opportunity and a severe challenge. The opportunity resides in the possibility of taking advantage of current signs of tactical flexibility in order to move toward conditions of peaceful coexistence and perhaps ultimately toward resolution. Evidence from respondents to the same poll who live in eastern Jerusalem suggests that practical, mutually beneficial working relations with Israelis tend to produce more moderate attitudes. On questions like Israel’s longevity and Jewish rights to the land, the 300,000 Jerusalemites are much more conciliatory than their four million compatriots in the West Bank and Gaza.

But then there is the severe challenge: given attitudes about the longer-term future, there is good reason to wonder if any “final status” agreement will ever truly be final. And all this is not even to take into consideration the positions of Palestinian leadership, which, as I mentioned early on, are markedly more hardline than those of significant numbers among the populations they rule.

For now, Daniel Polisar has contributed a set of key insights into the underlying issues behind Palestinian violence. Looking ahead, I hope that in his expanded study he will take in additional areas, beyond those covered in his Mosaic article, in which ample findings exist to be profitably mined and analyzed. I’d also welcome his data-driven thoughts on how Israeli policies can affect Palestinian attitudes for better or for worse—a point he touches on lightly but that I believe merits much more attention. (As he notes, Palestinian attitudes, although broadly stable over time, are not entirely static; I believe those variations largely reflect changing expectations of Israel.) More speculatively, I’d hope for some consideration of the—admittedly uncertain—links between attitudes and behavior. While most Palestinians say they support violence against Israelis, only a very few act on that impulse, and episodes of unrest and terrorism alternate with periods of great calm. Why?

Answers to these and other intriguing questions will undoubtedly shed even greater light on the broader issues at stake, and on the potential for resolving or at least reducing them to more manageable proportions.

Compromise for Now, the End of Israel for Later
1. Essay

What Do Palestinians Want?
2. Response