Daniel Polisar’s findings suggest it is not only Westerners who reduce Palestinians to passive figurines, but Palestinians themselves. 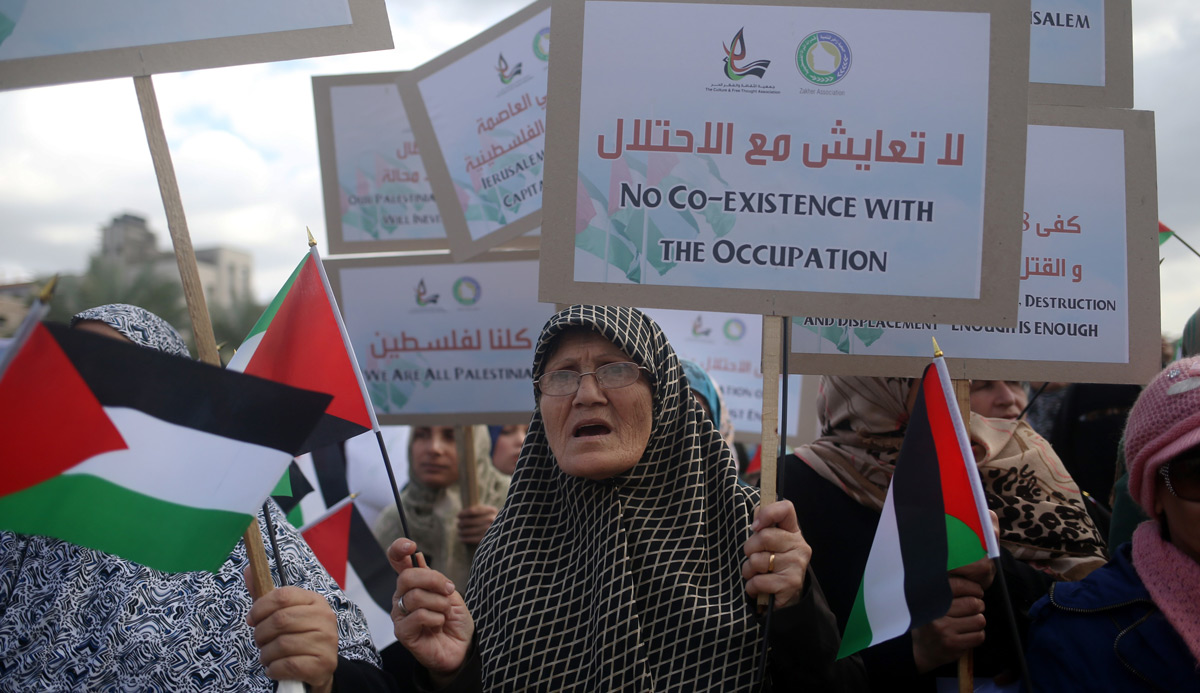 Palestinian demonstrators hold their national flag and banners during an anti-Israel protest in Gaza City on November 10, 2015. MOHAMMED ABED/AFP/Getty Images.

Possibly the most surprising thing about Daniel Polisar’s essay, “What Do Palestinians Want?,” is that the simple question it poses is so rarely asked. In his examination of 330 local surveys of Palestinian opinion on Israel, together with a few more carried out by foreign institutions, Polisar’s purpose is straightforward: to see how the Palestinian Arabs, key actors in a century-old conflict, understand events and how their behaviors flow from that understanding. Simple, yes—but a real innovation in discussions of the conflict.

At the outset of his essay, Polisar briefly wonders at the rarity of similar efforts, suggesting that the apparent lack of interest in a systematic appreciation of Palestinian opinion about Israel may flow from “a mistaken belief that public opinion does not matter in dictatorships,” or from “a dismissive sense that [Palestinians] are powerless pawns whose fate is decided by their leaders, Israel, or regional and world powers.” Out of kindness, perhaps, he omits a more basic explanation: that observers tend to believe they already know precisely what Palestinians think because those purported thoughts are conveyed to them daily by activists and supporters who have taken up the Palestinians’ cause.

Whatever the explanation, Polisar’s own effort to convey Palestinian public opinion on the conflict with Israel reveals the scope and depth of what has been missing. His implicit argument that “what is happening” on the ground is at least in part happening within the bounds of the Palestinian psyche and discourse rather dramatically shifts the common assumptions of diplomats, journalists, and would-be peacemakers.

The Israel that emerges from Polisar’s examination of Palestinian attitudes cannot be said to constitute, in any meaningful sense, a critical or diagnostic depiction of the reality of Israeli society. It is, rather, a vision of Israel that serves distinctly Palestinian needs. To be sure, one can say something similar about the astonishing role played by Israel, for good and (increasingly) for ill, in the consciousness of the West, where the many-layered life of a nation is so often reduced to a caricature through which the moral passions or identity narratives of foreigners can find expression. For Palestinians and Israelis, of course, the consequences that flow from their visions of each other are stupendously high—and so Polisar’s painstaking study is arguably a more fundamental and valuable contribution to understanding the conflict than any straight-line history would have been.

In part, this is because of the depth and nuance of his study, which dives deeper than the fairly well-understood facts about Palestinian rejection of Jewish legitimacy in the land and support for violence against civilians. Thus, Polisar shows that majorities of Palestinians believe that Israel actively sought the successive wars it has fought in Gaza, that the inception of those wars was wholly unconnected with Palestinian actions, and that Israel consciously intended to target civilians in those wars and so carries sole responsibility for the suffering that followed. Majorities also believe that Israel is largely or wholly to blame for breakdowns in peace talks with Palestinian leaders, and even that Israel bears primary responsibility for the inefficacy and incompetence of Palestinian domestic governance: for the deadly 1994 clashes between PA police and Hamas, for the even deadlier 2007 takeover of Gaza by Hamas, and even for the inability of Hamas and Fatah to reconcile in 2015.

Israel, that is to say, is at fault not only for the Palestinians’ physical conditions—economic underdevelopment, water or fuel shortages, and the like—but also for the failures of Palestinian leaders with regard to their own people and for the homegrown Palestinian political culture of autocracy and schism.

That the intentions of one’s enemy, in this case Israel, are believed to be diabolical is perhaps not so unexpected in any inter-ethnic conflict. The same is not true, however, when it comes to Palestinian views of Israeli power. Israelis (and Jews) are seen by most Palestinians as not only ruthless and dishonest but also as strong and clever. At the same time, this evil nemesis is seen, conveniently, as too monstrously immoral to survive. A narrative emerges from these consistent responses: Palestinians are comfortably certain that Israel is the cause of both their dilapidated condition and their inner failings but, luckily, is also doomed to implode, and in not much more than two decades’ time.

More arresting still is the finding about Palestinian support for political violence, particularly against civilians. Not only do Palestinians support such terror, but their support outstrips all other Arab peoples. However much they share the basic perspectives of neighboring Arabs, in this they are detached from the broader politics of the Arab world. That uniqueness is a more revealing finding than the simple fact of their support. As Arab states break apart in sectarian turmoil, majorities throughout the Arab world say they oppose violence against civilians, in part because this violence has been so consistently turned against themselves. The Palestinian experience of such systematic violence against civilians, however, primarily consists of the violence they themselves have inflicted on the “usurper” Israelis, not of violence visited upon them by jihadist zealots.

And that’s no accident. It is sometimes whispered among Palestinians that the Israeli enemy, for all his evil ways, at least provides a bulwark against the hordes rampaging through the region. That whisper conveys recognition of a fact: the Jews, in their successful efforts to defend themselves from the collapsing Arab order beyond their borders, also shield the Palestinians from that collapse.

The Israeli left often laments that Palestinian society has yet to produce a leader who grasps the extent to which the fulfillment of Palestinian national aspirations depends on the acquiescence of Israeli public opinion, and thus the strategic imperative for Palestinians to help build trust across the bleeding trenches of the conflict. Polisar’s examination of Palestinian opinion suggests a new reading of this failure. In the Palestinians’ own image of Israel—an entity malevolent in its intentions, overwhelmingly powerful, at once protective of them and a legitimate target for “resistance,” and ultimately destined to fall of its own internal contradictions—they have constructed a mental cocoon, an escape from moral and political agency. Polisar rightly laments the “patronizing” tendency of foreign observers to view Palestinians as “powerless pawns,” but his findings suggest it is not only Westerners who reduce Palestinians to passive figurines, but Palestinians themselves.

Of course, it would be intellectually dishonest to detach these Palestinian sensibilities from hard reality. Israel really is much more powerful than its Arab neighbors, and in ways deeper and more abiding than military might alone. Within that power relationship, Palestinians languish in legal and economic limbo while Israel has surged ahead both in material prosperity and in most global measures of national happiness. Similarly, it is an uncomfortable but undeniable truth that in the wake of the worst bouts of Palestinian violence, broad swaths of Israeli public opinion have tended to swerve toward favoring a final and definitive separation, often through calls for territorial withdrawal. It is hence not really so difficult to understand why Israel might be viewed by outsiders like the Palestinians, unfamiliar as they are with the internal tensions and complexities of Israeli politics, as simultaneously powerful and weak, oppressive and intimidated.

Yet to grant all this is still not to explain why Israel should be seen as guilty of the bloody Fatah-Hamas impasse, or how Palestinians’ explicit support for terror manages to coexist with the conviction of their own blamelessness for Israeli military responses, or how, in the face of incontrovertible evidence of Israeli success, Palestinians can conclude with apparently perfect candor that Jewish nationhood is terminally fragile. In each of these beliefs, borne out in the survey data, Palestinians are using Israel to answer an implicit question about themselves and their condition, and the answer is always the same: we are powerless, and therefore exempt from responsibility.

Polisar concludes that, taken together, these deep-rooted and time-tested Palestinian views place the onus for any movement toward peace on Palestinian leaders who might effect a change in attitudes. Yet the peculiar role that Israel seems to play in Palestinian minds suggests that this may be too optimistic. In Israel, the Palestinians appear to have found not only a real-life culprit for their real-world condition but the phantasm in which they can safely place all of the stymied hopes of their history and all the inner failings of their society. As long as Israel continues to serve as the meta-answer to every discomfiting question, effectively functioning as the Palestinians’ internal mechanism for denying their own agency, no alternative narrative has a chance of success. Put simply, too much is at stake.

What Do Palestinians Want?
3. Response

Compromise for Now, the End of Israel for Later
5. Last Word