This is a response to What Ahad Ha'am Saw and Herzl Missed—and Vice Versa, originally published in Mosaic in October 2016 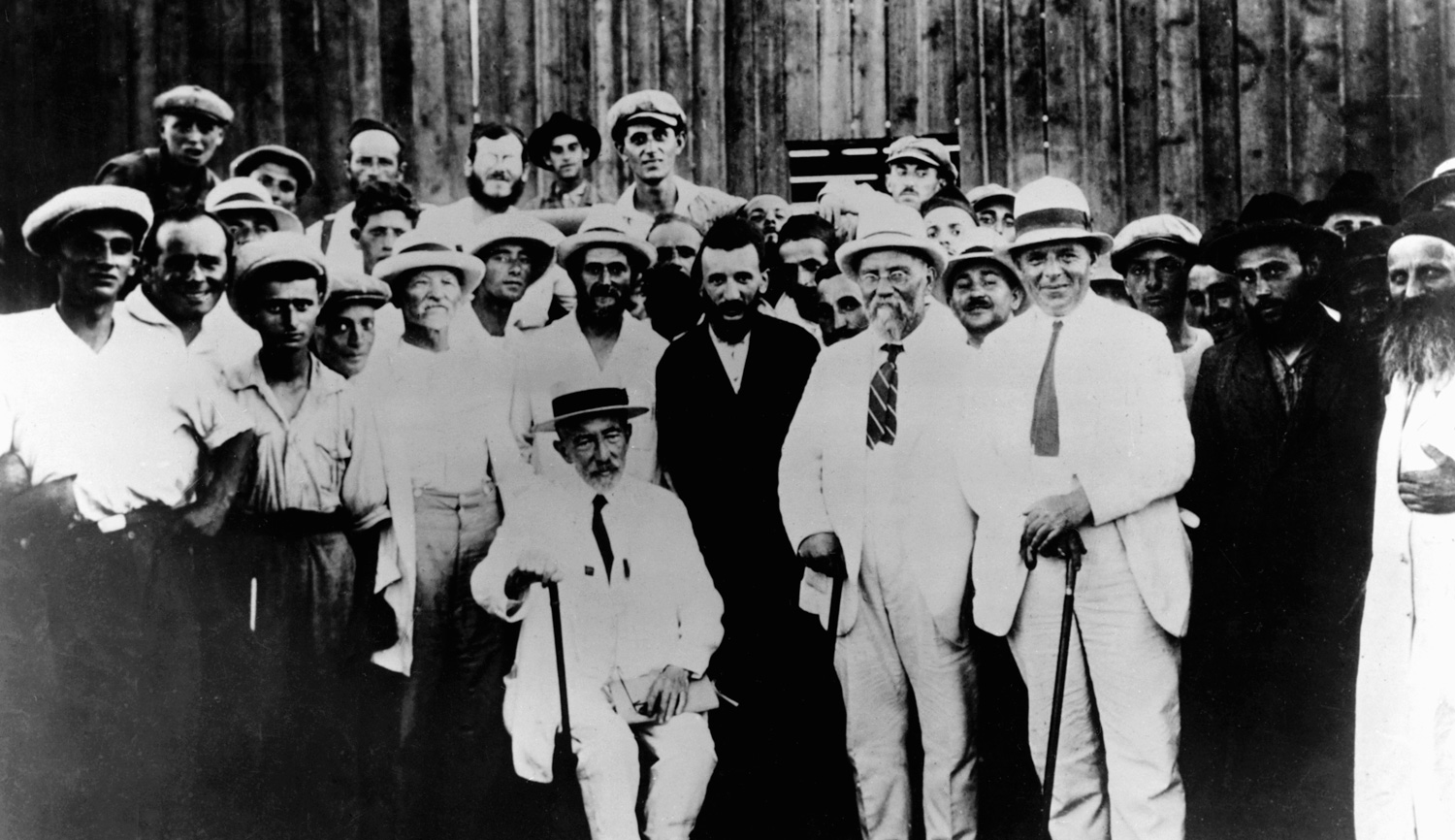 Ahad Ha’am sits next to Rabbi Yabloner, right, head of the Naḥalat Yaakov ḥasidic colony in pre-state Israel, while visitors and other colony members gather around them. Hulton-Deutsch Collection/CORBIS/Corbis via Getty Images.

In his response to my essay, Allan Arkush is probably right in saying that Ahad Ha’am, were he to visit present-day Israel, would grumble about what he saw and heard. The country’s rough-edged popular culture; its inelegant demotic Hebrew; its strident politics; its powerful but petrified Orthodox rabbinical establishment; its unending rule over a Palestinian populace that does not wish to be ruled by it—all this and more would have irritated him. Of course, he might also have found, as Asael Abelman observes, much to rejoice in, beginning with the historical miracle of there being a Jewish state at all, but he was by nature a fault-finder. He had high standards and never thought that either human or Jewish nature required him to lower them.

And yet, as Arkush, Abelman, and Steven Smith all assert, one cannot dismiss Ahad Ha’am. His influence continues to be great, not so much because anyone still reads him (few do) as because the two main paradigms of his thought remain central to Jewish life: his vision of a thriving Jewish homeland co-existing with a flourishing Diaspora that is inspired but not superseded by it, and his ideal of a Hebrew culture in this land that maintains and transmits the religious, literary, and intellectual heritage of Judaism in a secularized or semi-secularized form. In agreeing or arguing with these paradigms, we are agreeing or arguing, whether we know it or not, with Ahad Ha’am. When I wrote my book Letters to an American Jewish Friend 40 years ago, attacking the first paradigm and defending the second, I did both while ignoring his having been their first coherent formulator.

Arkush cites an imaginative piece by Fanya Oz-Salzberger that brings back not only Ahad Ha’am but also Theodor Herzl and other early Zionist luminaries for a look at Israel today. Although I haven’t read her piece, the presence of Vladimir Jabotinsky as one of the traveling companions strikes me as a good choice on her part. The two men must have had some lively arguments. Not unjustly, Jabotinsky regarded himself as Herzl’s true heir among the Zionist politicians of his day. Like Herzl, he did not think the Diaspora had a viable long-term future, and like Herzl, too, he hoped that a Jewish state would absorb—or rescue, as he came to see it in the 1930s—as much of Diaspora Jewry as cared to survive and render the rest of it irrelevant. In a conversation with Ahad Ha’am in Tel Aviv shortly before the latter’s death in 1927, he said to him, as recorded by Ahad Ha’am’s secretary:

You reject the necessity of a Jewish majority in Palestine and are willing to make do with it as a spiritual center, which is why I’m convinced that Herzl was right in your quarrel with him. . . . Everything you’ve written and done asserts that quality, not quantity, is what counts, and that 50,000 Jews in Palestine educated in the spirit of Judaism would counterbalance the 15 million other Jews in the world. But I say that three million Jewishly illiterate Jews [in Palestine] would be far more valuable than your handful of literate ones in a spiritual center. This isn’t because I don’t care about quality. It’s because I believe that if there is a Jewish majority in Palestine, things will work out Jewishly in the end, and that quantity will result in quality.

As opposed to Ahad Ha’am, Jabotinsky never thought that a Hebrew-speaking Jewish society in Palestine needed to make a special effort to be Jewish; it would simply be it in one way or another, just as Italy would be Italian and France would be French no matter what cultural trends prevailed in them. This was Herzl’s outlook, too, though he overlooked the need for Hebrew, for which he was quite rightly taken to task in Ahad Ha’am’s review of his 1902 novel Altneuland.

Neither Herzl nor Jabotinsky had the Jewish erudition or essentialist view of Jewishness that Ahad Ha’am did. (Yet, lest anyone think that they lacked the latter because they lacked the former, let it be noted that Ahad Ha’am’s greatest intellectual opponent in this respect was a man of immense Jewish learning. This was the Hebrew author Mikhah Yosef Berdichevsky, the subject of my next Mosaic essay.) For Ahad Ha’am, Jewishness could not just take any form. There were parameters, laid down by Jewish history, defining what it could and couldn’t be. For Jabotinsky, as for Berdichevsky, Jewishness was an attribute of Jewish life, not a formula for it, and was thus whatever a Jewish society made of it.

Ahad Ha’am’s Jewish essentialism was a secularized version of the religious essentialism of Jewish tradition, and as such it came to be expressed in untraditional ways. The most remarkable of these, no doubt, was the socialism of the Labor Zionist left in the first half of the 20th century; drawing heavily on transposed Jewish religious emotions, it associated the implementation of Jewish ideals of social justice with the idea of Zionism itself, to which it conceded little or no legitimacy if it strayed from them.

To this day, one hears echoes of this view in the criticisms of Israel’s would-be friends (of its enemies, one needn’t speak) who see it as a failed state unless it manages to solve the Palestinian problem or be a perfect democracy. One might refer them to a wonderful letter written by Jabotinsky to David Ben-Gurion in 1935. Part of it reads:

I can vouch for there being a type of Zionist who doesn’t care what kind of society our “state” will have; I’m that person. If I were to know that the only way to a state was via socialism, or even that this would hasten it by a generation, I’d welcome it. More than that: give me a religiously Orthodox state in which I would be forced to eat gefilte fish all day long (but only if there were no other way), and I’ll take it. More even than that: make it a Yiddish-speaking state, which for me would mean the loss of all the magic in the thing—and if there’s no alternative, I’ll take that, too. In the will I leave my son I’ll tell him to start a revolution, but on the envelope I’ll write: ‘To be opened only five years after a Jewish state is established.’”

Both Jabotinsky and Ahad Ha’am understood—as not only Herzl but many of the mass political movements of modern times failed to understand—that societies of millions cannot be successfully engineered. This was why Ahad Ha’am and his followers, who feared the free play of unregulated forces in a Jewish society in Palestine, preferred to think small, and why Jabotinsky, who welcomed it, thought big. For Ahad Ha’am, Zionism was a project with a preconceived social and cultural destination. For Jabotinsky, it was an adventure without one. He had his own values and beliefs and was willing to fight for them with all the determination he could muster, but their attainment was never, as far as he was concerned, a measure of Zionism’s success. Success was no less—but also no more—than a Jewish state in which the Jewish future could play out in unpredictable ways with Jews as its main players.

This state now exists. Although it is not the state that Herzl envisioned, I think he would have agreed with Berdichevsky and Jabotinsky that in the world of real life, existence precedes essence. And although Israeli society is not the society that Ahad Ha’am envisioned, either, it does have many of the things he wanted for it: Hebrew as its language; Judaism as a religion (though not as a political institution) respected and partially observed by a large part of its secular population; a high culture very much in touch with the Jewish past. Had he not been such a grumbler, he would have been thrilled by all this. We all should be.