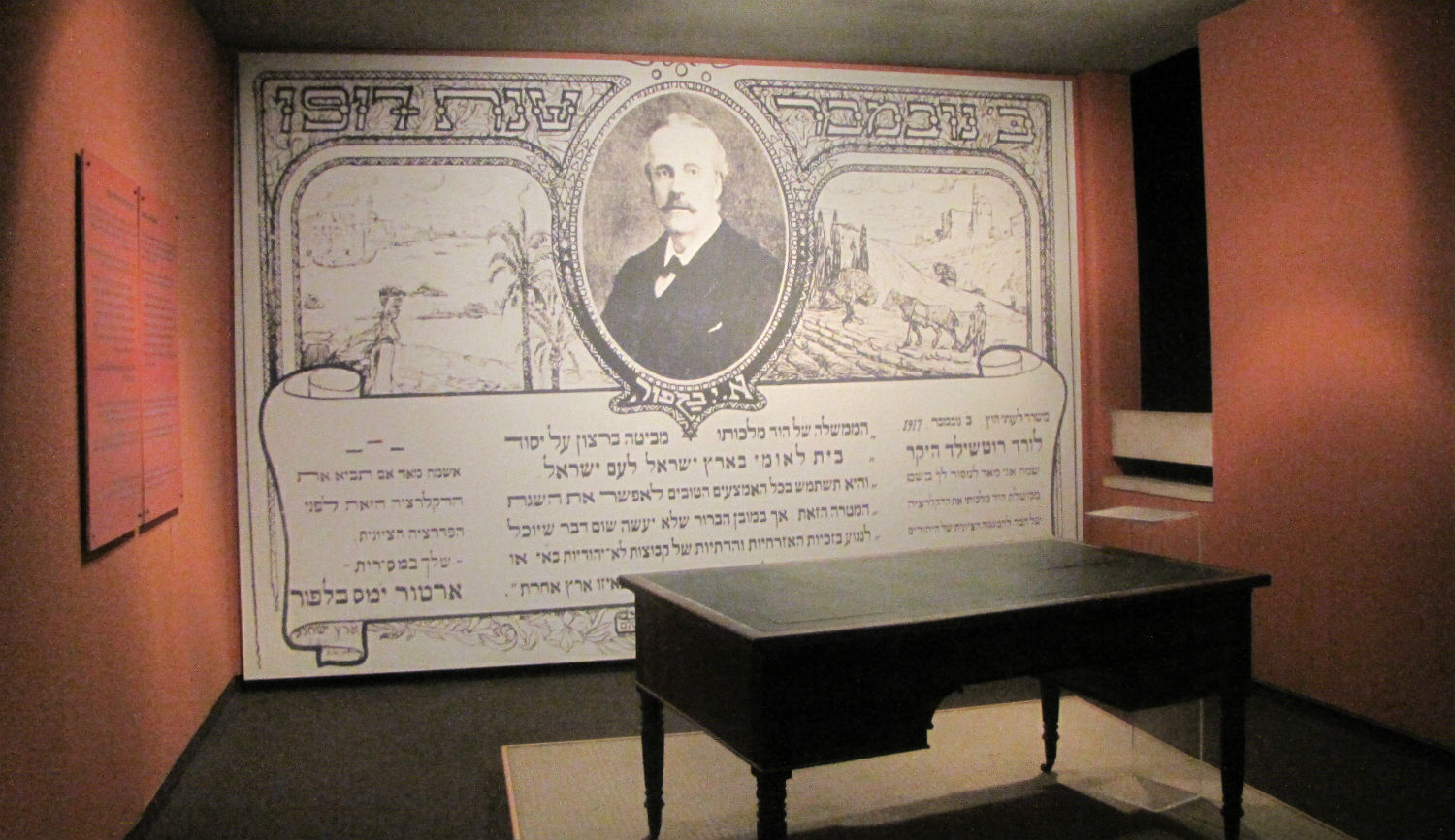 In his essay on the 100th anniversary of the Balfour Declaration, Martin Kramer has performed a valuable service by bringing Nahum Sokolow to center stage. Sokolow, as Kramer acknowledges, is not a wholly forgotten figure. Pick up just about any book dealing extensively with the history of the declaration, and you will find abundant discussion of his important contributions to the great accomplishment of 1917. But thanks in part, as Kramer notes, to Chaim Weizmann’s slighting of him in his influential autobiography Trial and Error (in which even David Ben-Gurion is granted only a cameo role), Sokolow has long been confined to the wings of Zionist history and has totally lost his place in popular memory.

Given everything Sokolow did during World War I, and before as well as afterward, it is indeed shocking to realize that no one has written a scholarly biography of the man even as other, lesser figures have received full-length treatment repeatedly. I hope that someone takes Kramer’s cue and rectifies the situation.

Kramer himself, however, isn’t interested so much in restoring Sokolow’s reputation as in highlighting the significance of his diplomatic achievement. As a result of those efforts, he seeks to show, the Balfour Declaration received, prior to its issuance, the kind of support that saved it from being merely “a British imperial grab” and turned it into “the outcome of a carefully constructed consensus of the leading democracies of the day.” It was owing in large part to Sokolow’s powers of persuasion that France, Italy, and the United States were on board with the British policy—and so, among the non-democratic entities, was the Vatican. Likewise, in the years immediately following the declaration, Sokolow played a vital part in cementing the adherence of these other powers to the policy of creating a Jewish national home in Palestine.

It is therefore quite wrong, Kramer concludes, to believe that “the Balfour Declaration arose outside any legitimate framework, as the initiative of a self-dealing imperial power.” In fact, it “wasn’t the isolated act of one nation. It was approved in advance by the Allied powers whose consensus then constituted the only source of international legitimacy.” And this consensus wasn’t a fleeting thing, but remained in force after World War I ended.

Still, even if the Balfour Declaration wasn’t merely a British power play, Kramer is willing to admit that it was that, too. The British had their eye (too keenly focused, perhaps) on the influence of Jews in the United States and Russia, and thought that a British endorsement of Zionism would fortify Jewish loyalty to the Allies. More important, they were looking for a way to wriggle out of the 1916 Sykes-Picot agreement, which envisioned too large a French presence in postwar Palestine.

How exactly support for Zionism would serve this British purpose is something that Kramer doesn’t make perfectly clear. But he hints at it—and at the political self-interests of other players at the time—when he observes that part of Sokolow’s diplomatic task in 1917 was to persuade the French leaders “of the virtues of a British protectorate over Palestine,” which was what the Zionists, who distrusted the French, also strongly preferred. Nor does Kramer spell out completely why the British wanted to exclude the French from Palestine. But as many historians have explained, the country was of value to them primarily as a buffer that would help to protect the Suez Canal from any future adversaries to the east of it, including, perhaps someday, French forces based in Syria (the territory which the Sykes-Pico agreement intended to award to them in the postwar settlement).

Another thing that Kramer doesn’t fully clarify is how Sokolow succeeded in persuading the French to express themselves in accordance with British and Zionist wishes. He notes only that Sokolow, in his discussions with the French in 1917, “emphasized the feasibility of the Zionist project and how it animated Jewish opinion in Russia and America.” Going further than this, the Israeli historian David Vital observes that the leading French diplomat, Picot, “seems to have been convinced that the British would end by seizing Palestine and keeping it regardless of their undertaking to the French,” and that therefore all France could do was to make the best of a bad situation. Prime Minister Ribot, Vital maintains, appears to have been of the same mind.

The Vatican, for its part, seems to have feared the presence of the French in Palestine for another reason: it didn’t want a nation thoroughly tainted by militant secularism to obtain a grip on the Holy Places. And the Italian government appears to have taken its bearings from what was said at the Vatican.

The United States, of course, is a very different story. Here the key part, in Kramer’s narrative, is President Woodrow Wilson’s decision to override the American foreign-policy establishment’s hostility to Zionism and voice his support for the Balfour Declaration. Had he not done so, the British would most probably have refrained from issuing it.

What exactly motivated Wilson to act as he did is debatable, but it is clear, as Kramer does not quite say, that he did so in response to the last minute, behind-the-scenes intervention of Justice Louis Brandeis. Brandeis’s Zionism, Kramer does say (on the strength of a comment by the otherwise begrudging Chaim Weizmann) is something for which we have to thank Nahum Sokolow, who had recruited Brandeis to the cause. But this is a bit of an overstatement. Brandeis, under the influence of the journalist Jacob de Haas, whom he repeatedly credited with awakening his interest in Zionism, had already gone a considerable distance down the road from assimilationism to Zionism before he even made Sokolow’s acquaintance (although, to be sure, at the rally in Boston in March 1913 where they first met, Brandeis did publicly thank Sokolow for bringing him back to his people).

Whatever the case, Sokolow deserves all of the attention that Kramer has devoted to him. But the consensus of democratic nations favoring Zionism in the days of the Balfour Declaration, which is what Kramer is primarily interested in demonstrating, is also less than fully edifying when viewed in its political context alone. For, and certainly at the outset, it did not reflect the consensus of the peoples of the democracies under discussion but only the calculations of their leaders. And as my comments above suggest, these calculations seem to have been rooted less in lofty ideals than in wartime propaganda, “imperial grabs,” reluctant accommodations to others’ imperial grabs, worries about the security of sacred sites, and personal relations.

If that is the case, why should citizens of democratic nations today, being reminded both of their countries’ early support for Zionism and of the down-to-earth reasons for it, feel that they themselves have a heritage they ought to perpetuate? As it happens, there is a more inspiring light in which to view the issuance of the Balfour Declaration.

Any number of writers have sought to show how a long history of Christian support for the restoration of the Jews to Palestine percolated down to the British statesmen who made the key decisions, Lord Balfour preeminently among them but by no means the only one so affected. With respect to the United States, Michael Oren has argued that Woodrow Wilson himself “believed that returning Palestine to the Jews had divine, and not just political, ramifications and that he, Woodrow Wilson, was destined to fulfill that reunion.”

Kramer, who doesn’t see things this way, refers only in passing, and skeptically, to “Britain’s own supposed tradition of ‘gentile Zionism.’” But whatever one thinks of the merits of that tradition and the arguments for it, brushing them aside may not be the best strategy for endowing the Balfour Declaration with greater legitimacy in the eyes of at least some of today’s readers.

Toward the end of his essay, Kramer describes the retreat from the Balfour Declaration that took place in the years immediately after World War I, when the circumstances that led to its issuance had ceased to exist. He hazards the guess that, had it been included in a secret letter instead of being publicly announced and thereby becoming a commitment from which the British government could not honorably extricate itself, the declaration probably would indeed have been disavowed already by the 1920s.

But there is a different way of accounting for the continuity of British policy. In his great but now out-of-print and mostly forgotten book The Siege: The Saga of Israel and Zionism (1986), the Irish scholar and statesman Conor Cruise O’Brien puts it like this:

If a Zionist of the pious sort were to tell me that the true explanation of this [continued British commitment] was that God had decided that it was time for His people to come home, I should no doubt express polite skepticism. But if the same pious Zionist were then to ask me whether I can discern any explanation, in terms of Britain’s material interests, for the British government’s reinforcement of the Balfour Declaration, in the circumstances of the early 20s, I should have to say that I can’t find any such explanation.