Old fashioned anti-Semitism played a role, but the greater part had to do with a fear, justified or not, of provoking the Arabs. 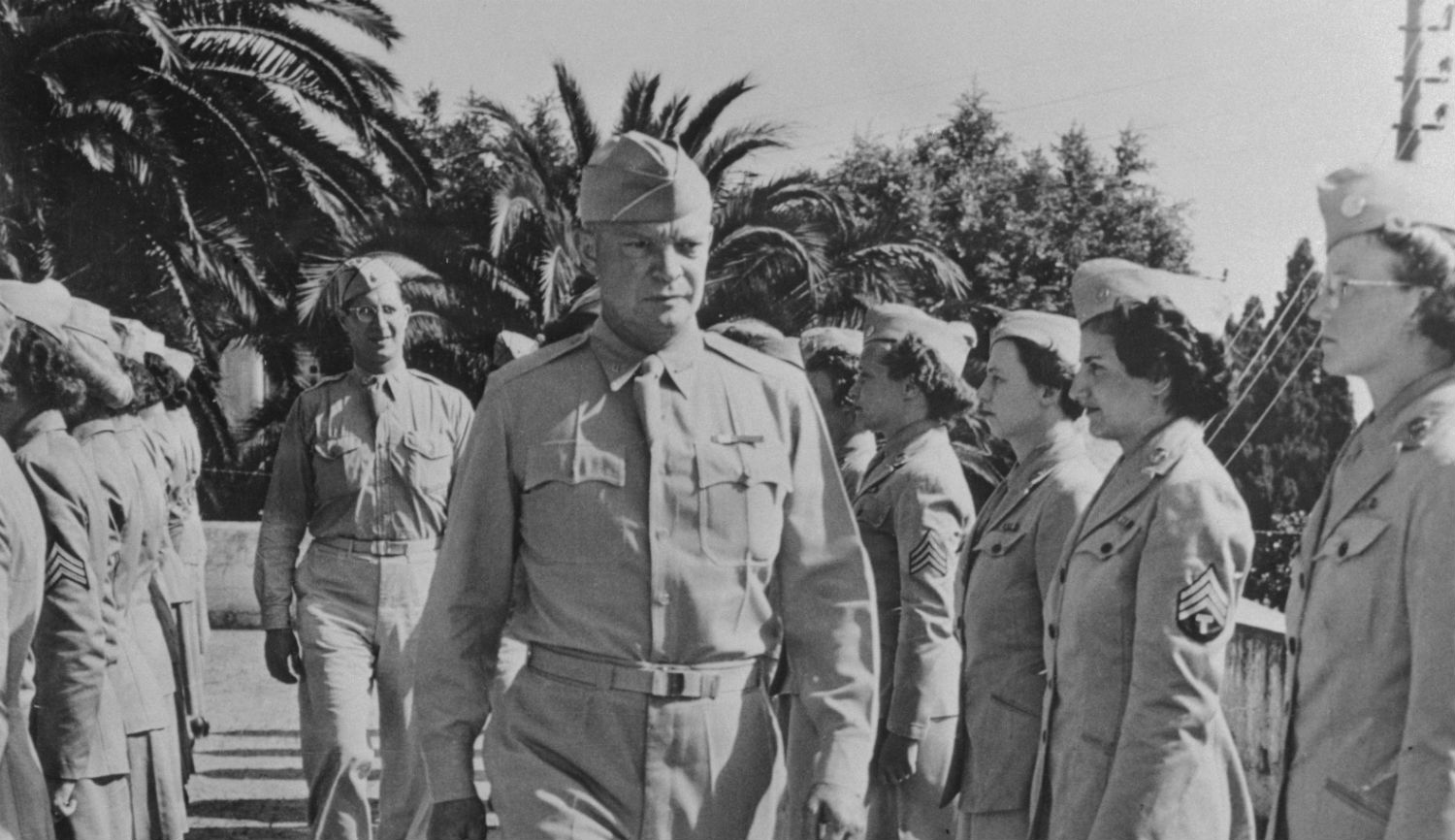 Members of the Women’s Army Auxiliary Corps on overseas duty in North Africa are reviewed by General Dwight D. Eisenhower in 1943. Bettmann.

Response
Michael Doran
About the author

While researching and writing my recent book, Ike’s Gamble, which tracks the evolution of President Eisenhower’s Middle East policy, a question nagged at me. What enduring lessons did Eisenhower, as the commander of the North Africa campaign (1942-1943) in World War II, learn from this, his first experience of the Arab world? By the time it came to sending the book off to the publisher, I still hadn’t found an answer. Robert Satloff, I can jealously say, has now given us one.

Satloff’s essay in Mosaic, “The Jews Will Have to Wait,” represents countless hours of research in primary sources in several languages, not to mention interviews conducted halfway around the globe. It shines a bright light on a little-known episode, which, Satloff claims, was far more consequential than we have realized. And his core conclusions are persuasive. Yes, we should indeed consider Operation Torch, the November 1942 Allied invasion of North Africa, to be the beginning of the story of American engagement in the Middle East. And yes, views about the Middle East that crystallized in the minds of American officials at that time did indeed influence United States foreign policy for years thereafter.

I believe, however, that Satloff slightly exaggerates the degree of influence exercised specifically by this campaign on the broader history of American Middle East foreign policy. To my mind, other factors, pointing in the same direction as Torch, were at least as decisive if not more so.

In An Army at Dawn, his Pulitzer-winning history of the North Africa campaign, Rick Atkinson writes: “North Africa was a pivot point in American history, the place where the United States began to act like a great power—militarily, diplomatically, strategically, tactically.” Moreover, Atkinson suggests, an influential segment of the foreign-policy elite that would guide the United States through the early stages of the cold war in the Middle East first cut its teeth in North Africa and there developed a strategic belief system that continued to guide them thereafter. Satloff’s thesis is a masterful elaboration of this theme.

The continuity of personnel is striking. Consider, for example, Robert D. Murphy, the villain in Satloff’s story. In the postwar 1940s and throughout the 1950s Murphy held influential diplomatic posts, some of them directly related to the Middle East. During the Suez crisis of 1956-57, and the Lebanon intervention of 1958, he reprised his wartime role as one of Eisenhower’s trusted diplomatic troubleshooters.

In the intelligence world, the story was the same. A number of influential Arabists in the early CIA first learned their trade while serving in the Office of Strategic Services (OSS) during Operation Torch. The leading example is William Eddy. Fluent in Arabic, Eddy played an important part in 1941 in organizing a North African network of clandestine operatives for what would become the OSS. After the war, he occupied a number of influential positions related to the Middle East, including as ambassador to Saudi Arabia. By 1947, when President Truman created the CIA, Eddy, now serving in the State Department, would help to organize and mobilize the intelligence community for its role in the cold war.

And of course the most influential of all the veterans of Operation Torch was Eisenhower himself.

What did they learn? During Operation Torch, as Satloff so admirably demonstrates, Eisenhower and his associates feared that, if they drew too close to the North African Jews, the Arabs would revolt, tying down forces that were badly needed elsewhere. By the 1950s, this idea had grown into a more general principle. If the foreign-policy elite in the 1950s was certain of one thing about the Middle East, it was that a close association of the United States with Israel and the Jews would provoke the Arabs, driving them into the arms of the Soviet Union. A primary strategic goal of the Eisenhower presidency, therefore, was to prove to the Arabs that America was not in Israel’s pocket.

But when and how did Eisenhower and the others acquire this oversized fear of association with Jews? Satloff suggests that it was “a gift” from the Vichy authorities in North Africa, who transferred their homegrown theory of Arab-Jewish relations to men like Robert Murphy. In my own view, it would be more plausible to conclude that the Americans were receptive to the Vichy perspective because they had already, independently, developed a fear of association with Jews.

Old-fashioned anti-Semitism certainly played a role. While at the Casablanca Conference of the Allies in 1943, President Roosevelt demonstrated a breezy indifference to the persecution of North African Jews. In a conversation with General Charles Noguès, the French resident-general in Morocco, Roosevelt offered his advice about how best to respond to the post-Torch plea of Algerian Jews that their French voting rights be restored.

“The answer to that,” said the president according to the contemporaneous notes of his aide, “is very simple: namely, that there just weren’t going to be any elections, so the Jews need not worry about the privilege of voting.” He further instructed Noguès to adjust the numbers of local Jews in professions like law and medicine so as to align their proportion with the percentage of Jews in the total population. This approach, he explained to Noguès, would prevent local Muslims from advancing “the specific and understandable complaints which the Germans bore toward the Jews in Germany,” where they had been disproportionately represented in the educated professions.

Roosevelt’s views were colored by anti-Semitism, but his stated goal was to avoid provoking the Arabs—among whom, as he rightly or wrongly presumed (wrongly, insists Satloff), resentment toward Jews was deep and abiding. This view of the Arabs came to the Americans not primarily from the Vichy authorities but from elsewhere. It came from their own experts on the Middle East.

Many of those experts were Protestant missionaries, or had been schooled by missionaries. Ever since the mid-19th century, these missionaries claimed, they and their predecessors had sacrificed in order to develop friendships with Arab Muslims, thereby burnishing the image of the United States in the Middle East. Now, however, official American support for Zionism was angering the Arabs, many of whom had consequently begun to view the missionaries as emissaries of a hostile power. To the missionaries, Zionism was thus responsible both for destroying the missionary project and for damaging the national interest—two indistinguishable values in their minds.

The case of William Eddy, who happened to be the son of Presbyterian missionaries in Lebanon, is again instructive, but far from unique. When he and other likeminded missionaries became government officials, they brought with them their ideas about the peril of American association with Jews and spread those ideas far and wide throughout the foreign-policy elite. Operation Torch provided one opportunity for educating the uninitiated. Another, greater one would come in 1947 as Truman contemplated supporting the Palestine partition resolution in the United Nations.

At that time, Eddy played a major role in drafting the CIA’s official assessment of the impact of partition on the national interest. Support for a prospective Jewish state, the draft stated, had already roiled the waters in the Middle East and undermined American prestige there. But worse was to come if the United States were to help establish an actual Jewish state:

[T]he resulting conflict will seriously disturb the social, economic, and political stability of the Arab world, and U.S. commercial and strategic interests will be dangerously jeopardized. While irresponsible tribesmen and fanatic Muslims are haphazardly blowing up parts of the oil pipelines and attacking occasional Americans, it is possible that responsible governments will refuse to sign pipeline conventions, oil concessions, civil-air agreements, and trade pacts.

Eddy did not need the Vichy authorities to teach him that association with Jews would provoke the Arabs and lead to strategic disaster. He imbibed that lesson with his mother’s milk.

In World War II (and later in the cold war, too), fear of strategic disaster was always at the forefront of Eisenhower’s mind, and as a commander he was under relentless pressure to show results on the battlefield. The same considerations were true of FDR, for whom the only priority, overriding all others, was to defeat the Nazi army as quickly as possible. Satloff doesn’t give this factor its full due. Robert Murphy’s callous indifference to the suffering of North African Jews was indeed shameful, but if Murphy were here to defend himself he would undoubtedly plead that he was, after all, Roosevelt’s personal representative in North Africa—handpicked by the president and ordered to communicate with him directly, circumventing the State Department. And Roosevelt’s views were abundantly clear: no political project, however justifiable morally, could be allowed to divert resources from fighting the Nazis, and, in any area under Allied occupation, the existing political status quo, however noxious, was to be supported.

The pressing need to destroy the Nazi army might not exonerate Murphy, but it does render him slightly less villainous, shifting some of the blame for his shameful judgments onto others: the president, who signaled an obvious disregard for the Jews, and the political experts, who were assuring him that a restoration of Jewish rights in North Africa could lead to rebellion among the Arabs.

In summary, Operation Torch was indeed the moment when key precepts of American policy toward the Middle East crystallized, and copious thanks are due to Robert Satloff for revealing this to us in such vivid and eye-opening detail. But, though it was the occasion for that crystallization, the North Africa campaign was not its primary cause.

How WW II American Leaders in North Africa Learned to Disregard the Interests of Jews
1. Essay

The Jews Will Have to Wait
3. Response

FDR Called Operation Torch a "Great Jihad of Freedom." It Was Nothing of the Kind.
4. Response

Why the Jews of North Africa Had to Wait
5. Last Word