A Defense Treaty between the United States and Israel? Just Say No

Israel’s independence has indeed eroded, and it must work to regain its freedom of maneuver. A defense treaty is the last thing it should want. 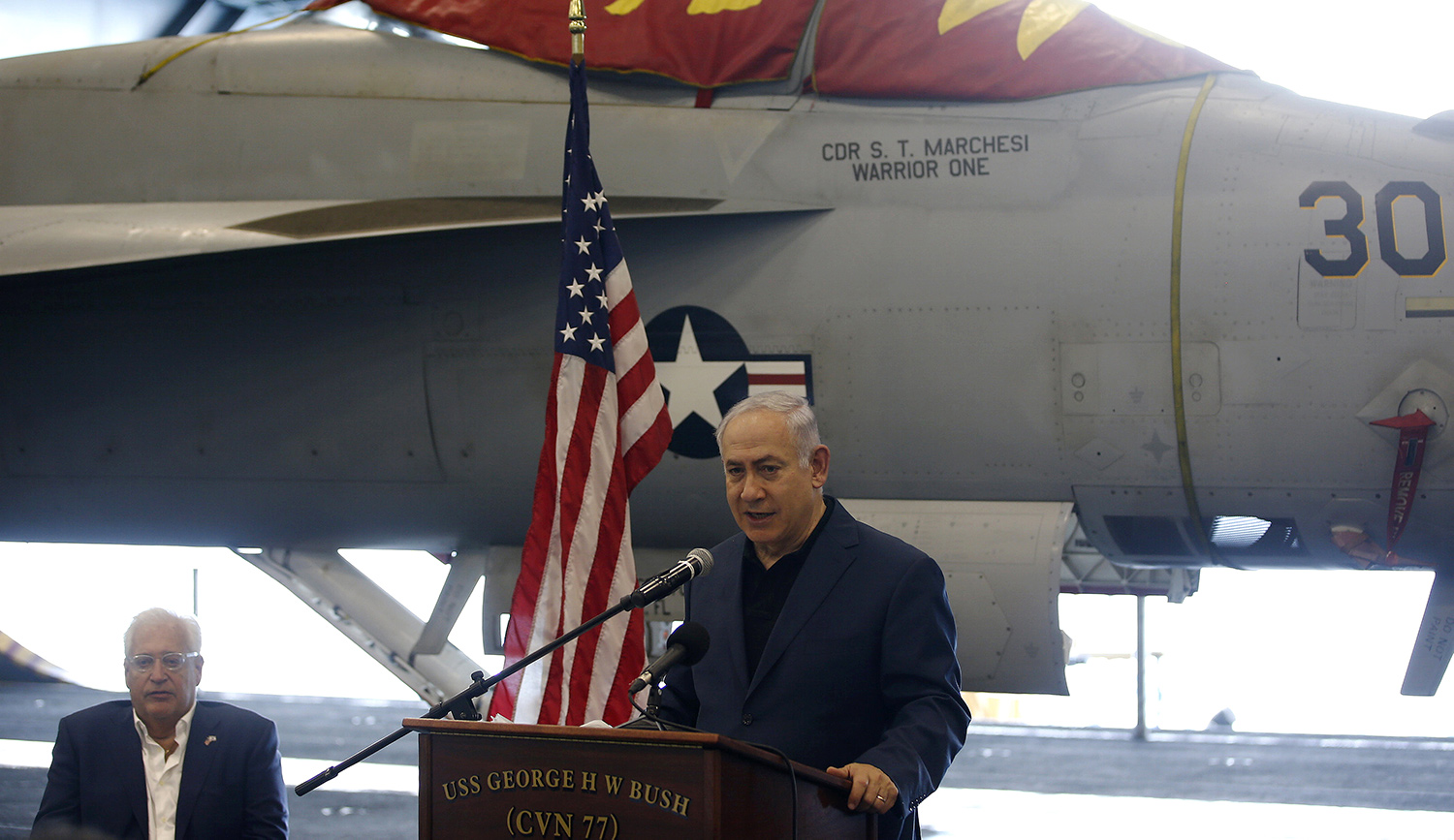 Israeli Prime Minister Benjamin Netanyahu aboard a U.S. aircraft carrier as it docks at the Haifa port on July 3, 2017. ZVULUN/AFP/Getty Images.
Response
Martin Kramer
About the author

Charles Freilich has produced an astute and savvy analysis of the forces driving the U.S.-Israel relationship. It’s no surprise: all who know him regard him as one of the most thoughtful (and critical) students of Israeli decision-making, and his writing is a model of care and restraint.

But the reader encountering Freilich for the first time is bound to be confused, because his major operative conclusion seems at odds with his analysis. After explaining at length how it would best serve Israel to be less dependent on the United States, he then proposes that it strive to conclude a formal defense treaty with that same United States. Having noted that the stature of the United States in the Middle East “is at its nadir,” he urges Israel to “cement” its understandings with the waning superpower. What gives?

The explicit rationale offered by Freilich is that such a treaty would be valuable to Israel in deterring Iran. Indeed, he writes, it “might prove to be the only partially effective response to a nuclear Iran.” If that were the case, such a treaty would be an existential necessity. But I find it improbable that Freilich really believes this, because in many other op-eds and interviews he’s asserted the opposite: that Israel is perfectly capable of independently deterring Iran, were that country to cross the nuclear threshold. “Israel’s own deterrence should suffice,” he has written. If so, a defense treaty with the United States would add no value to Israeli deterrence of Iran, and so would be totally unnecessary.

Then there are threats that fall short of the nuclear. But Israel, as Freilich knows, is capable of dealing with these threats on its own, and when its estimate of such threats differs from Washington’s, it presently has the leeway to chart its own course of action. Even Freilich is reluctant to sacrifice this freedom, however infrequently Israel exercises it. That’s why he writes that “a treaty could be crafted that would explicitly not apply to cases of low- to medium-level threats and hostilities.”

So if a treaty isn’t necessary to deter high-level threats, and wouldn’t apply to medium- and low-level threats, just what would it add? I could profess to be puzzled, but I’m not. That’s because I’m an avid reader of everything Freilich writes, so I hope he won’t object if I put his Mosaic essay in a broader context.

Elsewhere Freilich has argued consistently that Israel is headed for perdition if it doesn’t separate from the Palestinians. To achieve that separation, he has written, “Israel will have to agree to withdraw from virtually all of the territory [of the West Bank], other than limited land swaps, to the establishment of a Palestinian state, and to divide Jerusalem.” Since there is no Palestinian partner to an agreement, Israel should work to “keep the two-state solution alive” by the transfer of additional territory to the Palestinians “and above all [by] a halt to settlements outside the ‘blocs’ and [by] provision of incentives to settlers to begin ‘coming home,’ even without a final settlement.” Eventually, Israel will have to be prepared “to move the 100,000 settlers who live outside the blocs.” Unless Israel does so, it will be headed down a one-way street to a binational state—if it hasn’t turned that corner already.

Why is this relevant to Freilich’s essay on U.S.-Israeli relations? Because it is his view that no agreement with the Palestinians will ever be reached without the United States. “Peace will be achieved, if at all, only with American assistance.” And the only way for the United States to achieve results is “to confront both sides and ‘crack heads.’” Freilich doesn’t say this in his Mosaic essay, but he’s said it elsewhere, and it explains his otherwise most puzzling proposal that Israel should seek a formal treaty with the United States.

The explanation is made explicit in this crucial passage:

A defense treaty might constitute the kind of security assurance and strategic “carrot” that could increase the willingness of a highly skeptical Israeli electorate to accept the risks, and dramatic concessions, necessary for peace with the Palestinians.

This sentence appears in an earlier iteration of Freilich’s Mosaic essay. It was titled “How Long Could Israel Survive Without America?” and was published last July in Newsweek. The sentence reveals that the real significance of the defense treaty isn’t its contribution to Israel’s security. Rather, the treaty fits into a future public-relations strategy for wooing the Israeli center into concessions, so that Israelis won’t entirely recoil when the Americans start “cracking heads.” It’s the carrot to accompany the stick, something a future Israeli prime minister can dangle as compensation when time is ripe for the next big push for “peace.”

This linkage of the defense treaty to the Palestinian issue is, however, completely missing from the Mosaic essay, and that has the effect of making Freilich’s entire proposal nonsensical. For if you think that now is the time for Israel to assert its independence vis-à-vis the United States, and if you argue, as Freilich does, that Israel should even give up U.S. military assistance, why would you argue for a defense treaty, which would only shackle Israel even more tightly to the United States? The seeming contradiction is resolved as soon as the missing rationale is restored. The treaty has nothing to do with Israel’s real security needs. It’s the psychological part of the compensation package a future Israeli government will need, when it prepares to divide Jerusalem and turn 100,000 settlers out of their homes so that they can “come home.”

Let’s give Israel’s electorate more credit: they know that a defense treaty wouldn’t add substantially to Israeli security. And Freilich anticipates this by making another argument: a treaty may not add to Israel’s security, but its absence could subtract from it. Why?

Because, he answers, U.S.-Israel relations may have peaked, and, absent a treaty, U.S. support for Israel might slip. Freilich emphasizes the erosion of support for Israel on the left end of the American political spectrum, before making this argument: “A defense treaty would symbolize and cement the ‘special relationship’ at a time when signs indicate it may not continue to be as deep as it is now.” By constituting “a binding commitment to Israel’s security,” a treaty would “ensure the ongoing availability of weapons, remove any residual limitations on the supply of arms and technologies, and assure Israel’s long-term qualitative military edge”—even if the relationship goes from “deep” to shallow.

Freilich says a treaty would “cement” the relationship; another common expression is “lock in.” Robert Danin, a former U.S. diplomat and negotiator, used just that phrase in a 2016 Foreign Affairs article: Israel and the United States could

drift apart as each undergoes demographic, political, and social changes. This may be happening already. . . . There is no guarantee that the strong pro-Israel consensus that has long been a bipartisan feature of U.S. politics will endure forever. Now is therefore the time for Israel to lock in the existing benefits of its relationship with Washington.

So we are supposed to believe that even if support for Israel in America were to erode away, the United States would continue to “pay out,” as if a defense treaty were a Treasury bill.

This is a charmingly naïve approach to American foreign policy. In the vast spectrum of promises of all kinds issued by the United States, the T-bill is the most reliable; the foreign treaty is the least. You can “lock in” an interest rate for 30 years and sleep soundly. Sign a treaty with the United States? Don’t close your eyes for a moment.

It’s not that the United States is less reliable than other nations. It’s that interests aren’t interest rates, and when they shift (or the perception of them shifts), no treaty in the world can hold up under the stress. If the assessment in Jerusalem is that the United States is going to drift away from Israel, the last thing Israelis should want is a defense treaty. Israel would end up imploring some future administration to keep commitments it would rather forget, and for which there’s dwindling public support.

Given Freilich’s own doubts about the stability of American politics and policy, it’s remarkable he continues to propose this. He has called Donald Trump “probably the most ill-suited president ever elected in American history, glaringly incompetent, a danger to the American people and to the world.” The American president, he has written, “is motivated by fleeting political and personal gain, rather than deep strategic thought.”

If one believes this, why would one continue to advocate a defense treaty with a polity whose electorate has shown itself capable of putting such a “dangerous” man at the helm? Perhaps the rules of American politics have changed? Does Israel want to be handcuffed to a polarized and weakened power? Don’t misunderstand me: it’s not I who’ve passed this judgment on the Trump administration. But if I had, I wouldn’t be pressing for a defense treaty with a state whose foreign policy has just fallen unexpectedly into “dangerous” hands and might easily do so again.

Freilich has argued that it would be a betrayal of Zionism were the Jews to become a minority in their own state. I think he’s right. But I also think it would be a betrayal of Zionism if the only sovereign Jewish state were to become a satrapy. I agree fully with Freilich: Israel’s independence has eroded, and it must work systematically to restore its freedom of maneuver. But a U.S.-Israel defense treaty would be precisely the wrong way to go about it.

A Defense Treaty between the United States and Israel? Just Say No
1. Essay

Toward a New Model for the U.S.–Israel Relationship
3. Response

How to Ensure the Future of the U.S.–Israel Relationship
5. Last Word