This is a response to Israel's Demographic Miracle, originally published in Mosaic in May 2018 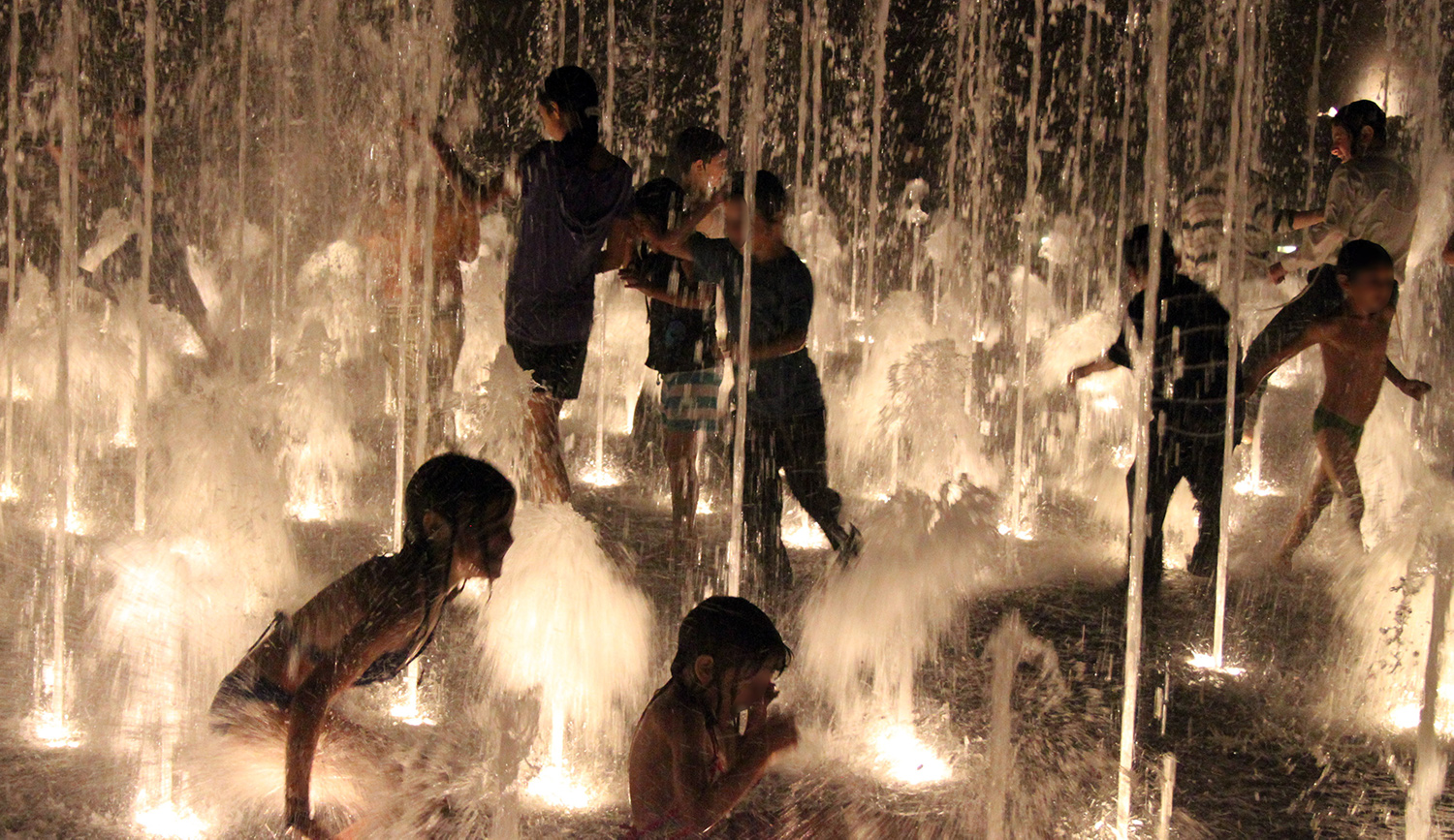 Children play in a water fountain on a hot day in the Old City of Jerusalem on July 25, 2013. Gershon Elinson/FLASH90.

The first touches on Israel’s inspiring and in some ways inexplicable demographic strength. The Jewish fertility rate is trending upward, Haivry points out, for deep-seated reasons of culture: a widespread ethic that values and validates child-rearing, an ethos of collective solidarity, and the still-powerful echoes of religious ideals even among the most secular of Israelis.

These are formidable, if amorphous, foundations for a country’s demographic potency. And they follow the general pattern: all of Israel’s deepest strengths—its democracy, its military prowess, its culture of camaraderie and self-sacrifice—are relatively poorly understood by sociologists and political scientists, rooted as they are more in unconscious social psychology than in any explicit planning or policy actions by Israel’s founders or leaders.

Israel’s democracy was built by refugees from non-democratic lands who never wrote a constitution, participated in little true debate about the nature and meaning of a free society, and lacked even the most rudimentary agreement as to what constituted a democratic regime. It is a democracy that rests fitfully atop a society marked by deep internal fractures, and that has been forced to weather endless wars and other emergencies—for example, the 1985 fiscal crisis that sent inflation soaring to 1,000 percent and led to the debasing of the shekel—the likes of which have toppled older and more rooted democracies.

It’s a similar story with Israel’s military capabilities, which flow in large part from the existence of a broad swath of Israeli society that is willing and eager to serve, that cleaves to a Roman-like sense of military service as an elite calling, and that combines a powerful individualistic ethic with an equally potent ethos of collective responsibility.

That description, at once vague and wordy, is nevertheless one of the basic truths of the Israeli experience.

When my three young boys are called to serve, they will not be donning the IDF uniform because of some ideology, or some political theory, or some mandate of state or religion, or some call to a national banner. As their Israeli father—and as a veteran and a son, grandson, and great-grandson of veterans—I know that Israel deserves my sons’ service only because it agrees with this proposition. It understands that it was created to protect them, and not the other way around. Our children can be sent off to battle only because we know that other Israelis’ children will join them, and because the leaders who will send them into harm’s way, having been elected by us, mostly reflect in their decisions an authentic communal need. My children are protected by this free people, and so can be called upon to do their part in its defense, serving and sacrificing not for the moral and political fantasies of others but for their own and their children’s freedom and safety, and, of course, for a society of compatriots willing to make the same sacrifice in return.

A democracy with uncertain origins but surprising resilience, a collectivist ethos deployed in defense of individualism, a lionizing of family and tradition alongside an underlying liberalism that ensures these traditionalist and collectivist choices are entered upon by free individuals—this is the Israel most Israeli Jews inhabit. Unsurprisingly, it is a happy place.

And this, too, must be said: the fact that Israel’s strengths are rooted in vague and poorly understood social realities doesn’t necessarily mean they are fragile. Indeed, the modern West is full of societies that enjoy the benefits of beautifully rendered constitutions and political institutions, expensive social-engineering programs, and a robustly complacent sense of superiority, but that are collapsing politically, economically, or demographically.

What this does suggest, however, is that in readying ourselves for a still uncertain future, we Israelis must take care to be both humble and curious about our social realities and cultural assumptions—our strengths. Could they fray? If they do, what will remain of Israel’s democracy, solidarity, and very capacity to survive? Are there other vital sustaining factors we are failing to see, and are therefore unable even to tell if they are slipping away?

It is hard but all the more necessary to remember that we are living through history for, as it were, the first time. Until Auschwitz there had never been an Auschwitz. Until Hiroshima there had never been a Hiroshima. Even great, creative, and powerful societies have fallen, and not from the exertions of their enemies but from internal disintegration. As Edward Gibbon long ago reminded us, the destruction of the Roman Empire in the 5th century was the result less of the “barbarian” conquests than of a generations-long unraveling of Rome’s cultural and political elite.

It is comforting but too easy to count on current trends continuing forever, especially when these trends, assuming they hold, seem to be releasing us from one of the most painful political predicaments of our age.

All of which brings me to Haivry’s second point—a point never raised or stated in so many words but lurking unmistakably in the background.

In former years, he writes, pressure exerted on Israel by Western officials, including American presidents, to withdraw from the West Bank was often laced with “ostensibly well-meaning warnings” about the Palestinians’ formidable birthrates, which, it was said, threatened to swamp the Jewish majority in lands west of the Jordan River. Now, however, thanks to Israel’s dramatic demographic reversal, with the Jewish birthrate rising and the Palestinian falling, the clear implication is that the Jewish state need be in no hurry to make space for a Palestinian state in the West Bank. As Haivry puts it, the latest statistics “tell a heartening tale concerning the demographic strength needed for Israel to survive and prevail in its existential struggle with its enemies.”

Indeed, this is a good time to be an Israeli conservative. The Palestinians still seem intent on rejecting the hard compromises on geography, immigration, and national narrative that peace would require. Israel’s economy is rolling along more or less successfully, a product of many years of careful stewardship. The current White House is to a great extent pursuing, albeit with exceptions and inconsistencies, the Israeli right’s ideal foreign policy. Meanwhile, even though many Israelis tell pollsters they are unhappy with right-wing politicians, the left keeps losing elections.

But the trouble with good times is that they eventually end. This is, or should be, a welcome truth in politics: there’s nothing quite so corrupting as incontestable electoral supremacy. Even Israel’s economy, despite its underlying strengths, represents but a small bubble of activity in a very big global economic system, a bubble that relies heavily on exports and is highly sensitive to shifts in world investment patterns.

And what of the demographic “good times”? It’s one thing to point to a positive trend, quite another to suggest it can be relied upon for the longer term. True, in celebrating the demographic turnaround Haivry is careful to qualify his future projections with phrases like “if current trends hold” and “foreseeable trends suggest.” But a much greater reason for caution lies in the tale he himself tells not at the end of his essay but at the very start.

He begins his story with Israel’s demographic situation back in 1998, the year of Israel’s 50th anniversary. Then, too, he writes, as today, “Israel had many accomplishments to be proud of.” But as for the future, its prospects twenty years ago “seemed far less promising. Especially bleak was the population forecast” often stressed at the time by Israel’s internal critics and “well-meaning friends” abroad:

All over the world in those years, Jewish birthrates . . . were on a downward slope, and Israel was no exception. Moreover, in Israel there seemed no realistic prospect of a substantial influx of new immigrants. . . . Meanwhile, birthrates of Arabs across the Middle East, including in Israel and the Israel-controlled territories of the West Bank (Judea and Samaria) and Gaza, were vastly higher than Jewish birthrates and showed no signs of diminishing.

These facts alone constituted grounds for serious worry that the Jewish majority in Israel would become so thin and attenuated as to pose a threat to the security and perhaps even the survival of the Jewish state.

It is indeed a stroke of good fortune, then, that in the interim, “defying all predictions, Israeli Jews started to have many more children, bringing about a complete reversal of demographic trends.”

Israel is a case study in the importance of humility in the social sciences—with lessons for all sides of the political spectrum. Israelis built a democracy where none should have existed, but does that mean their democracy cannot be felled? The Israeli Jewish birthrate is indeed rising while everywhere else in the developed world the fertility rate has been falling below replacement level, but does that mean it cannot go into decline just as suddenly? As Haivry himself warns, “so far no serious studies exist to explain [the] unusual and sustained phenomenon” that constitutes the great Israeli exception.

If Israel’s demographic future is a serious matter, not to be scoffed at or waved aside, Israelis must with equal seriousness address what the state plans to do should trends shift, validating the pessimistic forecasts once again. Can Israel’s survival really be allowed to depend on a pattern of behavior we scarcely understand, and that was nowhere on the horizon a single generation ago?

That the Jewish birthrate is rising is true, and wholly welcome. What’s worrying is that so extremely recent and woefully understudied a phenomenon should be used to advocate and implement policies that could leave the country saddled with a desperate moral, social, and political albatross down the road.

This is not to argue either for or against a withdrawal from the West Bank, or to suggest that today’s demographic trends will necessarily undergo a reversal in the medium or longer term. But given the importance of this question for the future of Israelis and Palestinians, and the hazards that loom for Israel if the celebrations are premature, it should worry us that we are still mostly guessing our way through so vital a debate.