What Others Can Learn from Israel about Having Children 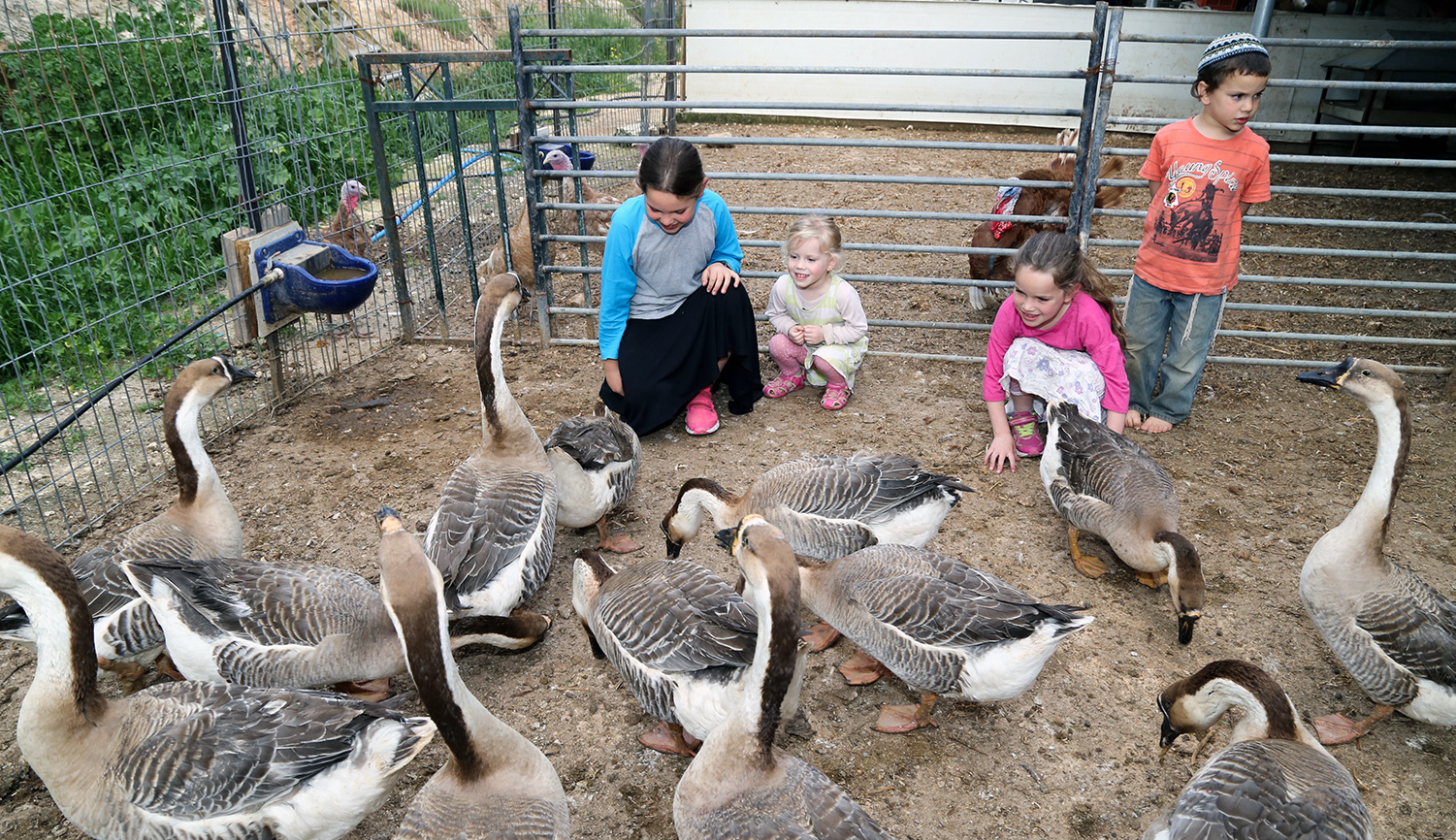 Israeli children at a farm in March 2018. Gershon Elinson/Flash90.

Response
Sarah Rindner
About the author

Ofir Haivry’s account of demographic trends in Israel is as heartening and uplifting as his picture of trends in the rest of the Western world is bleak and depressing. Inextricable from his argument about the meaning of Israel’s high fertility rates is his analysis of how the country’s cultural norms, which include a specifically Israeli style of parenting, may contribute to its fertility bonanza.

In pursuing this point, Haivry contrasts the situation in affluent cultures, where “the material and even the spiritual well-being of individuals is connected to the limit they place on the number of their children,” with the situation in more traditional societies where “large numbers of offspring [are regarded] as the single best measure of success and status.” Yet neither element in this binary juxtaposition quite accounts for most Jewish Israelis, whose family size continues to grow alongside the kind of Western drive that enables both parents and children to prosper in the modern world. Although Israeli parents marry later than they once did, are more educated than they once were, and continue to prioritize education and career advancement—all characteristics of affluent societies—they still continue to produce and to nurture sizable families.

The Israeli example thus invites a reconsideration of some settled assumptions about childrearing in the modern world. The American landscape is saturated with best-selling literature about ideal forms of parenting: French parenting, Danish parenting, Asian parenting, attachment parenting, free-range parenting, and more. One wonders whether an Israeli analogue is due, perhaps something along the lines of “How Israelis Remain Educationally Advanced and Psychologically Stable While Actually Exceeding the Fertility Replacement Rate.”

What’s their secret? Among other underlying motivators, Haivry points to a twinned pair: the strong sense of Israeli national solidarity and the family-oriented nature of much of Jewish religious life. Is it possible to replicate the Israeli birthrate in other parts of the world but without a corresponding value system that itself models how, and more importantly why, to raise a large family? However hard it may be to imagine self-interest ever being trumped by other values, some attempts have been made.

One such attempt was mounted in 2011 by Bryan Caplan, a professor of economics at George Mason University and the author of Selfish Reasons to Have More Kids. The American statistics cited by Caplan are in some ways even more dramatic than those cited by Haivry. In 1976, about 20 percent of American women in their early forties had five or more children; in 2006, 30 years later, the number had shrunk to less than 4 percent. With the two-child family the median for American families, as well as the size most commonly said to be ideal, it’s unlikely that the average American will so much as encounter a family with five or more children, let alone realistically envision such a family for himself. This, Caplan writes, coupled with the inevitable fact that for various reasons many individuals won’t have any children at all, portends major challenges to the sustainability of America’s economy.

As a social scientist, Caplan is less interested in investigating underlying cultural or spiritual causes and more focused on the perceived practical or economic impediments that, alongside such factors as parental age, inhibit people from having more children. Since, absent any imposed mandate, the rule will inevitably prevail that “the pain outweighs the gain,” the task becomes one of overcoming sidestepping that very rule.

Advocating a solution based on “enlightened self-interest,” Caplan therefore stresses the long-term pragmatic benefits of having more children. Granted, there are those initial drawbacks—sleep deprivation, burdensome expenses, etc.—but these are only temporary and need to be weighed against the great pleasures and satisfactions of being surrounded by grandchildren, of having many added occasions for joy in one’s later years, of knowing there will be hands to support one and sustain one’s spirits in times of need, and the like.

And that’s not all. On the early side of life, Caplan seeks to dispel the conventional wisdom that a child’s success rests on an intense investment of parental time and attention. Delving into the nature-nurture controversy, he cites studies of identical twins to argue that, since most aspects of a child’s development are determined by genetics and not by how the child is raised, parents and prospective parents should relax: there’s no need to drain emotional and financial resources in pursuit of a parenting perfection that will be largely irrelevant to a child’s actual success in life.

Given the crazed appetite for parenting manuals of the kind I mentioned earlier, it’s hard not to sympathize with this last point. That aside, however, the sheer ubiquity of plummeting birthrates across the Western world, including in the United States, should be enough to make one question the efficacy of such finger-in-the-dike proposals, if not to persuade one that an argument for parenting that’s based on individual self-interest is itself just another symptom of the problem rather than any viable path toward a solution.

This past summer, a sense of curiosity about these issues, as well as some personal questions relating to my own children, led me deep into a ḥasidic neighborhood in Monsey, New York for a five-day intensive parenting seminar. The speaker was the Israeli parenting guru Sima Spetner, who is largely unknown outside her devoted worldwide following of mainly ḥaredi Jews along with an eclectic mix of non-ḥaredi Israelis. Spetner, daughter of one prominent rabbi and wife of another, is herself a mother of fourteen. Her approach is built on a “positive parenting” philosophy that derives in part from the influential rabbi and educator Shlomo Wolbe as well as the groundbreaking Israeli child psychologist Haim Ginott.

Spetner’s classes purvey advice that would not be out of place in any modern parenting workshop: embrace difference and the unique strength of each child; recognize that emotional needs can be just as potent as physical needs; reconfigure “punishment” not as discipline but rather as an opportunity to encourage pathways for growth, and so forth. Yet her approach diverges from the contemporary Western model in two main ways.

One relates to family size. Most of the women taught by Spetner run large households. Accordingly, she places high priority on making sure the home is calm and orderly, governed by a firmly imparted if gently expressed sense of hierarchy and authority. Contrary to the general Western assumption that the fewer the children, the more time and focused interest will be invested in each one and the greater the consequent rewards, larger families require and often manifest a higher quotient of consistently attentive parenting and general harmony. Which makes sense: a household with two children who are inconsiderate, unhappy, or oblivious of their parents may be mildly tolerable; a home with six such children would be unlivable. Spetner’s approach thus aims to strikes a balance between cultivating each child’s unique talents and personality and helping all to thrive in a miniature society that is not fundamentally oriented around each individual psyche.

And that brings us to the second difference, which relates to the realm of values and purpose. For Spetner, a strong emphasis on individuality does not come at the expense of traditional Jewish religious values but rather augments and supports those values. The lesson for parents: since children can apprehend insincerity from a mile off, mothers and fathers intent on preserving and transmitting to their children a strong Jewish identity should actively work on their own Jewish practice. For me, one highlight of the seminar was Spetner’s discussion of “overflow”: that is, the way in which children imbibe and internalize a taste of what truly animates their parents during moments that can’t be engineered or planned in advance.

As one example of overflow, Spetner described for us her childhood experience of being with her rabbi father in northern Israel, close to the border with Syria, early in the 1973 Yom Kippur War. Her father was teaching at a yeshiva where students combine study with military service. As they hurriedly prepared to rush off to the front, his students were pelting him with religious questions pertinent to combat or frantically giving him messages to pass on to their parents in the event of their death. As he ministered to them, he gripped Sima’s hand tightly in what seemed to be fear.

Even as a young girl, Spetner understood how risky it was for her father to remain in a community so close to a combat zone, especially with a child. But he was unwilling to abandon his students. At that moment, he may not have been the “best” parent, but he imparted something to her that would influence and direct the rest of her life: great parenting isn’t only a parent intently focused on his child; it can also be a parent raising his eyes heavenward and the child following his gaze.

Pragmatic measures, whether in the form of the libertarian ideas presented by Caplan or of family-friendly government policies like mandatory maternity leave and the like, will never be enough by themselves to reverse the West’s falling birthrate. If we don’t believe in something beyond us, then having large families will inevitably be seen as more hassle than it’s worth. This only further underscores the conclusion from Israel’s contrary experience that the democratic West, as many have argued, is indeed undergoing a deep cultural or spiritual crisis of which the demographic crisis is less a cause than a particularly severe symptom.

Unfortunately, rebuilding a family-centered culture is vastly more difficult than tearing one down. To the legions of committed Jews in Western countries who care for their families’ and communities’ future welfare, Ofir Haivry’s essay issues a stark call to weigh in the balance the current trendlines of social, cultural, and spiritual health in their various lands of residence.

Daniel Johnson
May
The Changing Face of Israeli Society
2. Response

What Others Can Learn from Israel about Having Children
1. Essay

Israel Is a Case Study in the Need for Humility in the Social Sciences
4. Response