Who Speaks for American Jews Now?

Major Jewish organizations often represent no one but their own major donors. But would elected representatives offer an improvement? 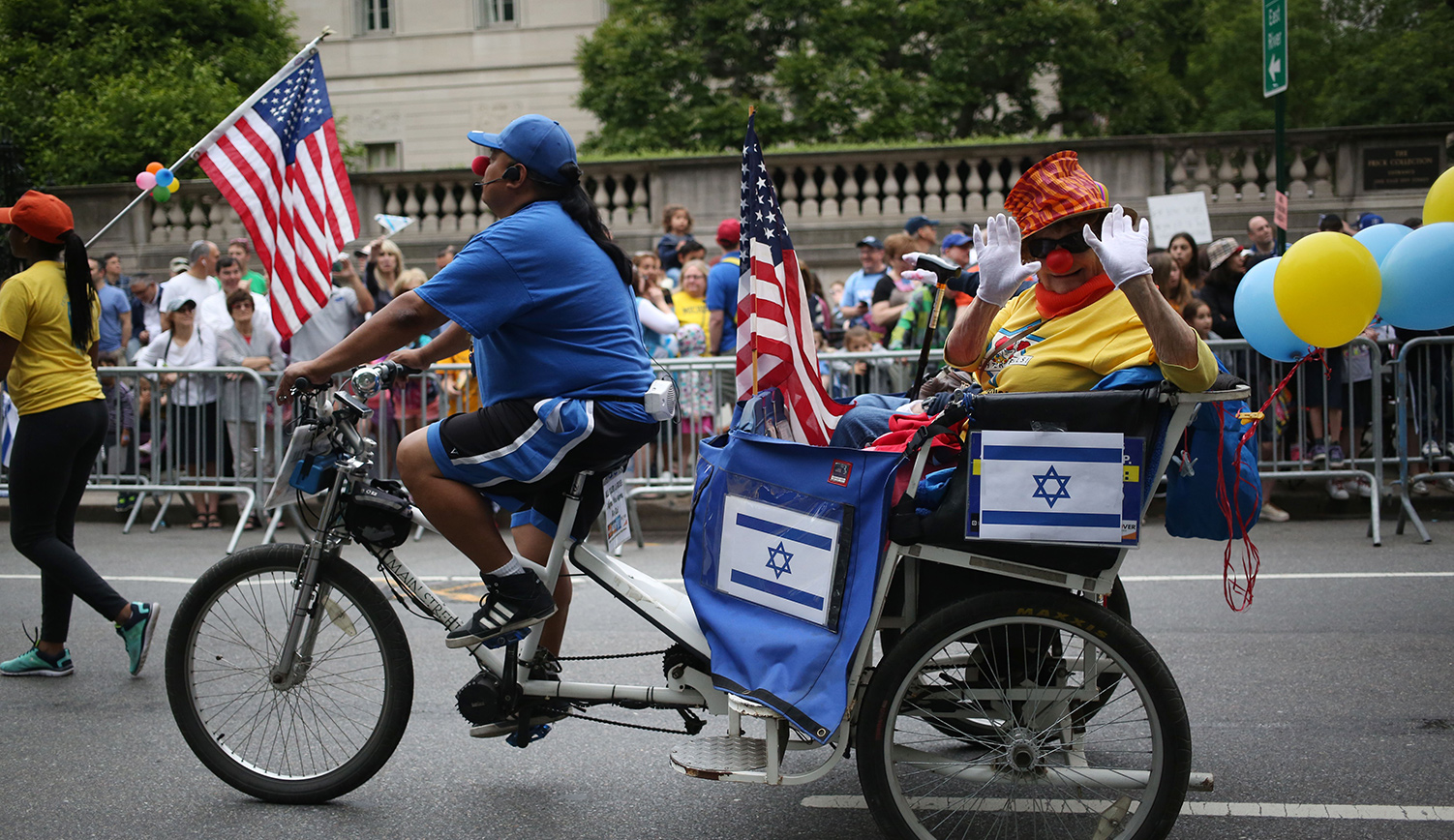 
Elliott Abrams is a senior fellow for Middle Eastern studies at the Council on Foreign Relations, where he maintains a blog, Pressure Points.

Natan Sharansky and Gil Troy have written a wise and fascinating analysis of Israel-Diaspora relations, and have then proposed a path toward ameliorating them.

As they explain, today’s situation is unprecedented: the world’s Jews live mostly, and for now in almost equal numbers, in just two places, Israel and the United States. What’s more, they write:

[T]oday, for the first time in 2,000 years, most Jews live under two radically separate constitutional arrangements. Rather than being united by a shared homelessness, half choose to live at home as sovereign citizens in the Jewish homeland, and most of the other half feel at home elsewhere.

Relations are troubled in good part because the objective situations of these two communities are fundamentally different: a small and secure minority in the world’s most powerful nation will never see the “Jewish Question,” or the world, the way that Israelis, sovereign in their own land but beset with security challenges from far more numerous enemies, must see them.

Beyond this, Sharansky and Troy also put their fingers on another central factor affecting the relationship, namely, the paradoxical consequence of the increasingly important role played by Israel in the formation of American Jewish identity:

When American Jews were mostly helping Israel by sending checks, Israel’s relegation of authority to its Orthodox chief rabbinate over matters like marriage, conversion, and other aspects of personal and civil status may have been annoying but could mostly be ignored as irrelevant. [But when] American Jews started turning to Israel to solve their identity problems, Israel’s slighting of the non-Orthodox branches of Judaism suddenly stung more deeply and came to be more resented.

Many American Jews cannot understand why Israelis are not more responsive to their complaints, but it isn’t all that complicated. Just as few American Jews “vote Israel”—choosing whom to support in elections based on the candidate’s record on Israel—few Israeli Jews “vote America.” As Sharansky and Troy put it in discussing the controversy over public prayer at the Western Wall, “even the 58 percent of Israelis who tell pollsters they support religious pluralism nevertheless vote based on many other economic, social, political, and security-oriented issues that they deem more pressing.” All politics is indeed local.

In his role these past nine years as chairman of the Jewish Agency, Sharansky’s own great efforts to strike compromises with diaspora communities have certainly not led him to idealize those communities or to sugarcoat their often combative attitudes toward Israel. Thus, in discussing the anti-Israel ferment on American campuses, and American Jewish reactions in general to the new anti-Semitism, he and Troy note that “the war against the Jewish state . . . is also a war waged, in however qualified or adulterated a form, in some synagogues.”

Nor can the problems between the two communities be solved simply by achieving greater familiarity with each other: “new intimacy itself generates new, often disruptive demands. As with a spouse—or a cellmate—the more you come to rely on each other, the more intensely you scrutinize each other.” That last, shocking metaphor is not only a memorable description of relationships between Israeli and American Jews; it is also a reminder (intended or not) that Sharansky, because of his own dedication to Zion, spent nine years of his life in the Soviet gulag.

At least in theory, one such entity already exists: the World Zionist Congress (WZC), established by Theodor Herzl in 1897. I am curious why the authors, who mention the WZC only once in passing, appear to dismiss the possibility of revivifying that organization. Might not renovation be easier than creating something from scratch, and might not the Congress’s long history help legitimize the new initiative?

Five-hundred delegates are elected to the World Zionist Congress, which meets every four or five years. The breakdown goes like this: 190 (38 percent) are allocated to Israel, 145 (29 percent) to the United States, and 165 (33 percent) to the remaining countries of the diaspora. In addition, there are those, 100 in number, who in American political parlance would be called “superdelegates,” in this case representatives of such major Jewish organizations as Hadassah and B’nai B’rith International.

The last WZC elections in the United States were held in 2015. The candidates consisted of eleven “parties.” Primary among them were the three major denominations. Reform Zionists won 56 seats, the Conservative movement’s Zionist arm won 25 seats, and the Orthodox won 24—not a fully representative result but also not a crazy one in light of the proportionate demographic strength of each denomination. (Further boosting the Reform showing was a “get out the vote” drive in its synagogues.) The remaining 40 seats were divided among other groups, ranging from the Zionist Organization of America to a Russian immigrant slate to a leftist slate comprising J Street and Peace Now.

Worth noting, however, is that the overall turnout of voters was nugatory: just under 57,000 ballots in a population of five million or so American Jews. Obviously, the WZC is invisible to almost all American Jews, and it would be easy to say that it is moribund. Yet it retains real influence. As the Times of Israel put it, the Congress

wields substantial control over three key institutions with significant assets at their disposal: the Jewish National Fund, which owns some 13 percent of Israel’s land; the Jewish Agency for Israel, which deals with immigration and absorption, as well as Zionism education, and has a $475-million annual budget; and the World Zionist Organization. The congress helps formulate the organizations’ policies, appoints some of their leaders, and has a say in how their money is spent.

Behind the scenes, then, the WZC exists and has genuine influence. Could it be revived? Could prominent Jews be persuaded to participate in it, and could it become a more democratic and representative body? That would be very difficult—perhaps even more difficult, because of the entrenched interests involved, than inventing a Jewish People’s Council. But before the creation of a new institution is accepted as the only practical path, one would hope that alternatives have been thoroughly examined.

In addition, it strikes me as worthwhile to look into the role to be played in the Jewish People’s Council by other, smaller diaspora communities. The one-third of all delegates accorded to such non-U.S. communities in the WZC may seem high, but whatever the “right” number may be, they merit greater attention than Sharansky and Troy give them. They are sources of possible aliyah; their situations, sometimes parlous, demand the close attention of Israeli and American Jews; their members frequently have stronger Jewish and Zionist convictions than do many American Jews; and their presence might help soften the often hard and uncompromising lines staked out by Israeli and American Jews.

Choosing the actual delegates to a Jewish People’s Council strikes me as a very tough issue. Sharansky and Troy write that “the Council might at first consist of members of the Knesset along with the existing representatives of major Jewish organizations from around the world.” This sounds logical—but the juxtaposition here is problematic. Members of the Knesset are politicians chosen in democratic elections. “[R]epresentatives of major Jewish organizations” are something else entirely. That gap alone will likely cause deep divisions. Moreover, having only Knesset members means that some of Israel’s leading citizens—a university president, a former ambassador to the United States or another diaspora country, a famous rabbi, a great scientist—would be absent.

But I admit that relying on politicians does help the Israelis escape one trap: in the diaspora, the major Jewish organizations often represent no one but their own major donors. The last thing this new body would need is a whole group composed of billionaires claiming to speak for Jews everywhere.

Indeed, the problem of adequate representation is an issue not just for tomorrow but for today. Who speaks for American Jews now? The heads of the major denominations? The lay leaders or professional staff of the major communal organizations like the American Jewish Committee, Hadassah, or the various Federations of Jewish Philanthropies? The major philanthropists who account for a growing share of “Jewish” charitable giving? Jews holding high government office? Jews who are the most dedicated to Israel, or the statistically larger group that has been to Israel once if at all?

Of course, Sharansky and Troy appear to know all this, which is why they want elections as soon as possible and see an inherent benefit in this exercise. “[T]he entire electoral process,” they write, “if properly handled, could produce a salutary effect of its own, being the kind of exercise that could help manage, and mitigate, some of our ongoing conflicts.” Maybe so; we won’t know unless we try.

For its analysis of relations between Israeli and Americans Jews alone, the essay by Natan Sharansky and Gil Troy would be of great value. Their willingness to offer a concrete proposal adds even more weight by giving all interested parties something to debate—and through that debate to illuminate the conflicts, choices, interests, and values of each national Jewish community and indeed of each interest group, communal or religious organization, synagogue, local community, and every individual Jew.

It remains to be seen whether Jews in America and Israel are best viewed as one united people, as quarreling spouses, or as cellmates doomed to a troublesome but unending intimacy. Sharansky and Troy’s thoughtful essay will help all concerned to think through how the better vision—of one united people—might yet be realized.

Menachem Wecker
July
Can American and Israeli Jews Stay Together as One People?
3. Response

Does Such an Entity as "the Jewish People" Still Exist?
4. Response

For the Sake of Any Future Dialogue, Israeli and Diaspora Jews Need First to Define Who They Are
5. Response