Here's Why So Many Are Outraged by Israel's Nation-State Law

The text of the law’s main article embodies the essence of Zionism and the state of Israel. Not so, the context envisioned by the law’s promoters. 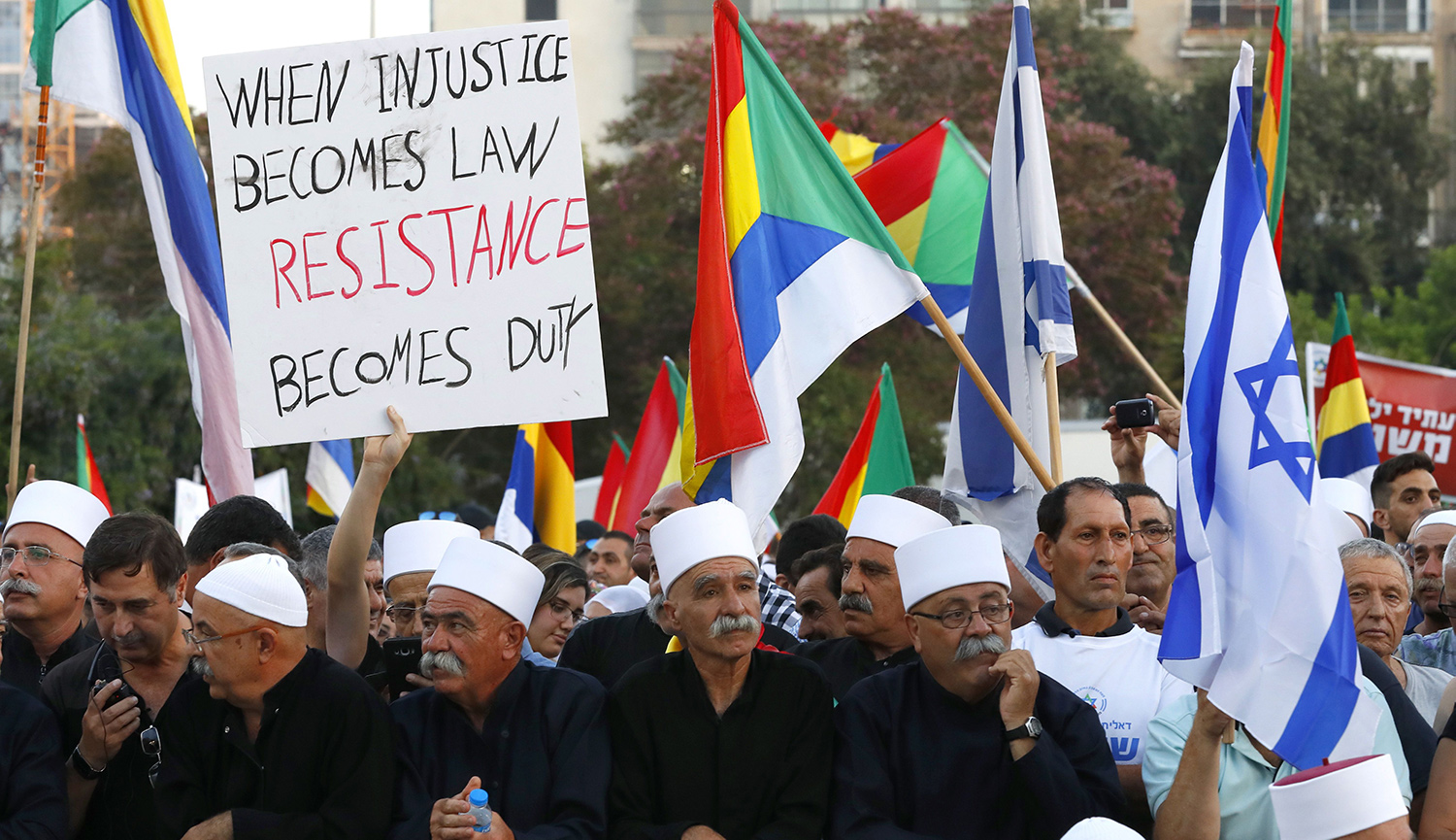 Members of the Israeli Druze community and their supporters protest against the new nation-state law in Tel Aviv. JACK GUEZ/AFP/Getty Images.

Response
Einat Wilf and Shany Mor
About the authors


Einat Wilf, a former Labor member of Israel’s Knesset, is the author of Telling Our Story and The War of Return (with Adi Schwartz).

Shany Mor is an adjunct fellow at the Foundation for Defense of Democracies and a research fellow at the Institute for Liberty and Responsibility at Reichman University.

“Why all the outrage over Israel’s nation-state law?,” ask, innocently, Moshe Koppel and Eugene Kontorovich in Mosaic.

The answer is: context. Just as Koppel and Kontorovich don’t trust Israel’s “activist and politically-biased [Supreme] Court” to interpret properly any law that would enshrine the broad concept of “equality”—thereby admitting that context matters immensely to them, too—we don’t trust this Israeli government and this law’s political promoters to interpret Zionism properly.

Only one article in the nation-state law truly matters and entails clear political consequences. It is article 1(c): “The exercise of the right to national self-determination in the state of Israel is unique [our emphasis] to the Jewish people.” All other articles flow from this one.

In one context, this statement embodies the essence of Zionism and the state of Israel. As a proposal for enshrining the Jewishness of the state in part of the historic Land of Israel, with an overwhelming Jewish majority and an unimpeachably democratic regime, the text of the Basic Law: Nation-State is generally acceptable and reflects the broad consensus of Israel’s Jewish Zionist majority. Indeed, nothing about Jewish self-determination is especially unique or uniquely bad.

In another context, however—the one envisioned by the law’s recent promoters—the law becomes a proposal for entrenching, against any possible democratic challenge, Jewish supremacy in a regime covering the entire Land of Israel with a bare 50-percent Jewish majority, if that. In this context, the law is entirely unacceptable.

The text may be the same text, but the context is radically different, and so would be its application. In effect, the declarative import of the law will have moved from affirming one people’s liberation to endeavoring to preserve another’s subjugation.

Between the Jordan River and the Mediterranean Sea live millions of people who belong, broadly, to two collectives. Whatever either one thinks about the other, and however “invented” either one deems the other’s nature, they rather violently agree that one is not the other. We ourselves believe, and it is the general global spirit of the last century, that these millions of people have the universal right to be sovereign masters of their fate. They can do so in one polity or more.

We, proud members of the Jewish collective, who believe that the purpose of Zionism was not to create a concentrated Jewish minority in a majority-Arab Muslim state, prefer that the Jewish people be sovereign in a state of their own, and that the Arab Palestinians exercise sovereignty in a state of their own as well. As the numbers stand, this means partition: dividing the land between the two collectives so that each enjoys a solid and overwhelming majority in a state of its own. This is the only path that enables all the millions of people living between the River and the Sea to exercise sovereignty.

In this context, the context of partition, article 1(c) is perfectly fine. It is even necessary. It makes it clear that the very purpose of the painful act of partition is indeed to secure, for generations to come, the one state in the world where “the right to self-determination is unique to the Jewish people” while also adhering to the founding vision of a state based, in the words of its Declaration of Independence, “on freedom, justice, and peace as envisaged by the prophets of Israel.”

But if in the state of Israel the Jewish collective is uniquely entitled to exercise its right to self-determination, as is proper, it follows that the only way the Arab Palestinians, the members of the other collective, can exercise their own universal right to be sovereign in some polity is to have self-determination in a state of their own.

This is why one of us, Einat Wilf, while a member of the Knesset, and in the wake of Prime Minister Benjamin Netanyahu’s 2009 speech at Bar Ilan University in support of the two-state solution, signed and defended the then-proposed bill in its early round; indeed, as much as Netanyahu now denies it, his government was at that time actively negotiating partition. And this is also why Wilf continues to defend the same text in the now-passed law—on the condition, however, that Israel simultaneously and publicly delineate its final eastern border along a mildly altered 1967 line—and why Shany Mor has likewise defended the text against its more hysterical critics.

But this is emphatically not the vision of the law’s promoters. They—most notably, Justice Minister Ayelet Shaked, Tourism Minister Yariv Levin, and Environment Minister Zeev Elkin—are vocal opponents of Arab-Palestinian self-determination. They are on record, frequently and repeatedly, rejecting any division of sovereignty in the land between the River and the Sea. Worse, they are known promoters of plans to annex the entire West Bank while permanently denying any path by which the Arab Palestinians living there could ever gain sovereignty and become masters of their fate.

(Yes, the rejectionists’ plans do speak of annexing “only” 60 percent of the West Bank, known in the Oslo Agreements as Area C. But that is a fraud. There is no such thing as a single “Area C.” Instead, there are numerous small areas bearing the designation “C”; in practice, annexing them would mean annexing the entire West Bank while excluding the Arab Palestinians living in dozens of enclaves there from participation in the rights of the annexing power. Calling this “autonomy on steroids,” as some have done, is no help; unlike the situation in autonomous regions elsewhere, the inhabitants would still be denied participation in the sovereign polity that determines their fate.)

In this context, it becomes clear why annexationists like Shaked, Levin, and Elkin cannot abide a guarantee of “equality” in any basic law: given the numbers, equal citizenship for all Arab Palestinians living between the River and the Sea would spell the end of sovereignty for the Jewish people. For our part, we, too, like most Israeli Jews, fear equality under conditions of annexation—again, however, not because we distrust Israel’s “activist and politically-biased [Supreme] Court” but because it would spell the literal end of Zionism.

The reason that Israeli Jewish annexationists must oppose equality is that their plan can be carried out only through the denial of Arab Palestinian rights, either to self-determination in a state of their own or as equal citizens in the state of Israel. From this perspective, the constitutional victory heralded by the law’s promoters has little to do with the Supreme Court itself; after all, none other than Ayelet Shaked recently told the Atlantic that Israel’s “conservative camp can no longer whine about being underrepresented” in the courts. Instead, it has almost everything to do with the West Bank settler movement, which has gradually redefined Zionism from a movement for the self-determination of the Jewish people in its historic homeland to an affirmation of a theocratically based regime lording it over a non-Jewish majority. There is a name for this, and the name is supremacism: specifically, Jewish supremacism.

Koppel and Kontorovich might seek to allay our fears and mitigate our resistance by saying, as they have done in conversation, that the issue of annexation is a separate matter and we should fight for partition regardless of the nation-state law. But we have no intention of legitimizing the explosive legal foundation that the law provides for promoting the annexationist position. The supremacists’ Zionism is not ours, and the Israel they are busy preparing is so distant from the ideals of Israel’s founders that we vow to fight it every step of the way.

Here's Why So Many Are Outraged by Israel's Nation-State Law
1. Essay