Whatever international law says, or doesn’t say, it will never be applied fairly and consistently to the status of Jerusalem. 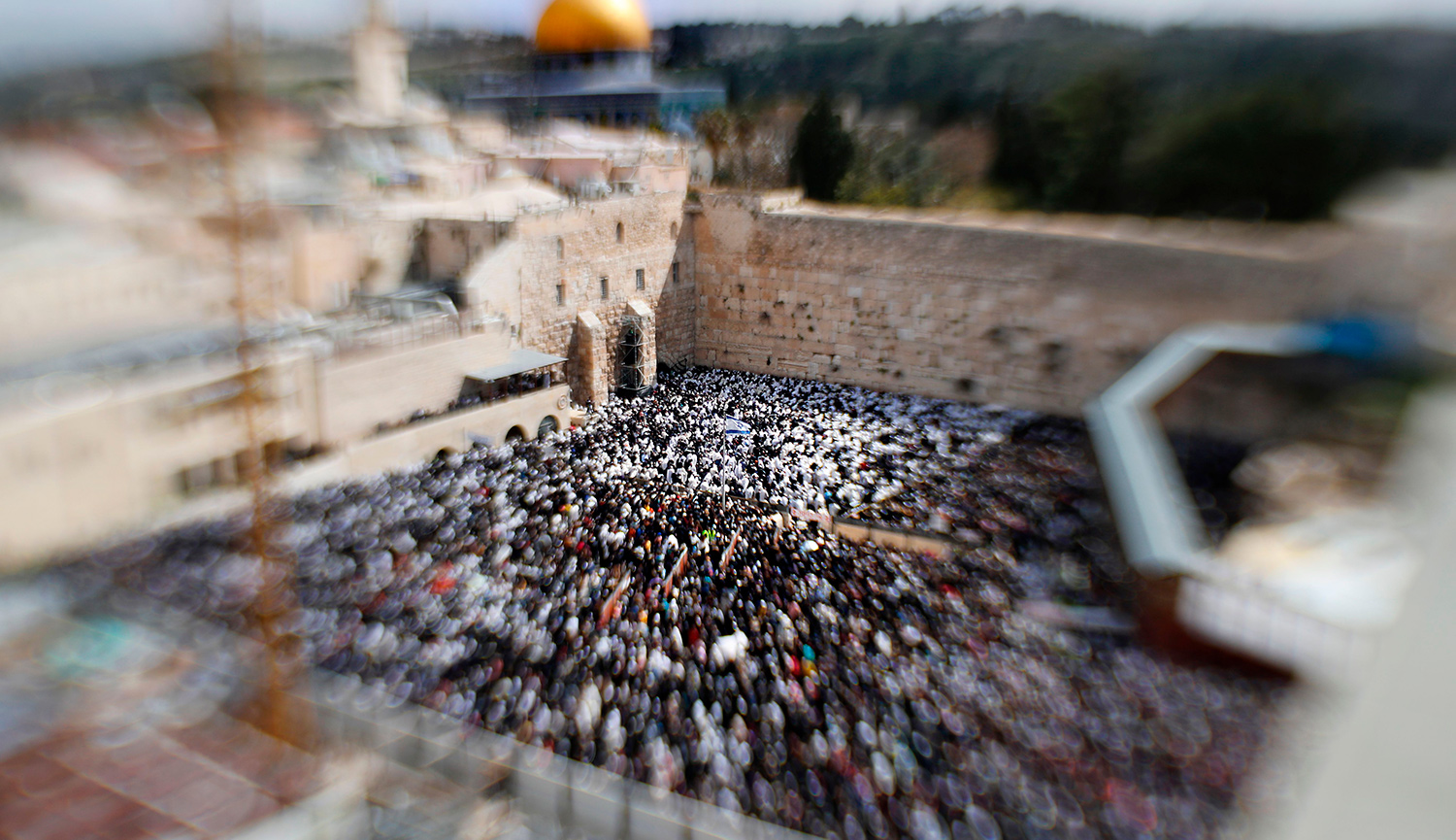 A blurred view of the Western Wall during Passover in April 2019. THOMAS COEX/AFP/Getty Images.


Michel Gurfinkiel is the founder and president of the Jean-Jacques Rousseau Institute, a conservative think-tank in France, and a Shillman/Ginsburg Fellow at the Middle East Forum. His “You Only Live Twice,” on the contemporary situation of European Jews, appeared in Mosaic in August 2013.

Eugene Kontorovich, Jeremy A. Rabkin, and Douglas J. Feith were kind enough not only to read my essay, “The Mirage of an International Jerusalem,” but to contribute their own acute reflections on the subject.

This is rewarding in itself. Even more rewarding is that they broadly agree with me on the main point: namely, that where Israel and Jerusalem are concerned, what passes for international law amounts, by the standards that usually apply to other nations and capital cities, either to sheer nonsense or to travesty; and that in all these respects President Trump and his administration should be unrestrictedly praised for replacing nonsense and travesty with realism and sanity.

I derive additional satisfaction from my respondents’ interest in the historical evidence supporting my contentions, from the long-term demographic presence of a Jewish plurality or majority in Jerusalem to the pervasive if often contradictory role of the Holy See right before and right after Israel’s War of Independence in 1948.

This brings me in turn to the very important issues raised by my respondents themselves, issues they address not only with great authority but in ways that very helpfully complement my essay.

One such issue is the extent to which international law, even when purged of its dross and counterfeit, can actually be relied upon. In the present case, that is, should Israel be satisfied with a vindication of its formal rights to its land and its capital, along the lines effected by the United States in 2017 and to a lesser degree by some other countries. Admittedly, this is a huge improvement over the earlier situation, but should Israel take steps to consolidate further its real and exclusive control of the areas concerned?

After all, as Eugene Kontorovich sharply reminds us, “under the straightforward application of general international-law rules, Israel had sovereign title over all of Jerusalem and Judea and Samaria since 1948.” But of course, as he also reminds us, where Israel is concerned international-law rules are regularly disregarded altogether, most notoriously by the UN, “in favor of a tailor-made set of rules that apply to Israel alone.”

In this same connection, Jeremy Rabkin is right to remind us of the sorry experiment that was the Free City of Danzig (1919-1939): arguably, the test-case of “internationalized cities” in the 20th century.

The Free City’s legal credentials were impeccable: it had been created under the terms of a valid treaty of peace among sovereign nations in order to provide one of them, Poland, an outlet to the Baltic Sea, and it was supervised by a similarly valid international body, the League of Nations. However, as the correlation of military and political forces that had brought about both the peace treaty and the international guarantor unraveled, and as a completely new correlation emerged that was centered in Nazi dynamism, Danzig lost both its relevance—as Rabkin notes, the Poles soon deemed it safer to duplicate the Free City with a new harbor in Gdynia—and any semblance of separation from Germany as the local government became aligned with the Nazi structures of governance, and the local Jews had to leave.

Other instances of direct “international” involvement, from the post-1945 international regime in Trieste or Berlin to the de-facto partition of Kashmir or the UN’s peacekeeping missions in southern Lebanon and many other places, tell a similarly discouraging story. While such arrangements are deemed to be “international,” they are always dependent on the deployment of national military forces and the willingness of national governments to use them. Short of that, they are effectively null and void.

Cold-war Berlin, which all three respondents mention in different contexts, is a good example: its status was always the outcome of a trial of strength. In one instance, in 1948-9, the West proved ready, via a massive airlift, to call the Soviets’ bluff and prevent them from illegally taking over the West’s sectors in the former capital of the Reich. In another instance, the West chose not to resist the completely illegal incorporation of the Soviet-occupied sector (“East Berlin”) into the Soviet-dominated German Democratic Republic.

Another, altogether much less glorious example is the UN’s 1957 deployment of its Blue Helmets, which—as a quid pro quo for an Israeli withdrawal from the Sinai—was supposed to guarantee a state of non-belligerency between Israel and Egypt. When Nasser demanded that the Blue Helmets depart in May 1967, the UN—and the Western powers behind it—immediately complied, thus leaving Israel no other option than to strike and defeat Nasser at the earliest possible moment.

Douglas Feith’s lucid and damning indictment of the U.S. State Department’s ditherings on Israel and Jerusalem bring us to an even deeper question: how reasonable is it for the Jewish state to depend on even its best and most loyal friends? From 1948 on, in terms of public opinion, America has been the most pro-Israel nation in the world. From 1967 on, it has been the world’s most pro-Israel nation in military and political terms as well—to the mutual benefit of both countries. And public support for Israel has steadily improved, reaching a level of about 70 percent in opinion surveys.

And yet, despite all this, as Feith shows, the so-called Arabist faction in the State Department has been able to nurture a more adversarial policy doctrine and, more often than one might think, to implement it.

It has taken a Trump administration finally to align U.S. diplomacy on Jerusalem with the American people’s feelings and wishes. What if this extraordinary new way forward is followed in time by a reversion, partial or complete, to longstanding earlier ways? And that is not to take into consideration a worst-case scenario in which one or both national parties become thoroughly infected by radically anti-Israel influences.

In brief, even the close alignment of the United States and Israel can be manipulated—just as, for so long, was international law.

Many years ago, I had an opportunity during a private dinner to discuss the rocky relationship between France and Israel with Michel Debré. A Catholic of Alsatian Jewish origin, Debré—the father of the present French constitution and a former prime minister—was certainly not hostile to Israel. Yet, as one of De Gaulle’s closest confidants and political heirs, he could not repudiate the pro-Arab and anti-Israel line taken by France in the wake of the 1967 war.

I asked him why France, which had recognized East Berlin as the capital of Communist East Germany in spite of many reservations on the basis of international law, was so fastidiously reluctant to recognize Jerusalem, or even only “West Jerusalem,” as the capital of Israel. “Oh,” he replied, “Jerusalem is a special case, you know. . . . It will always be a special case.”

The subtext, clearly, was: whatever international law says, or, if not, whatever is supposedly the French national interest in any given instance.

To me, this sounded very much like a moment of truth.

Jerusalem Is and Always Will Be Treated as a "Special" Case
1. Essay

The Mirage of an International Jerusalem
2. Response

The Many Incoherences and Hypocrisies of International Law on Jerusalem
3. Response

The Lessons of Previous Misadventures in "International Control"
4. Response