This is a response to The New Catholic Zionism, originally published in Mosaic in September 2019 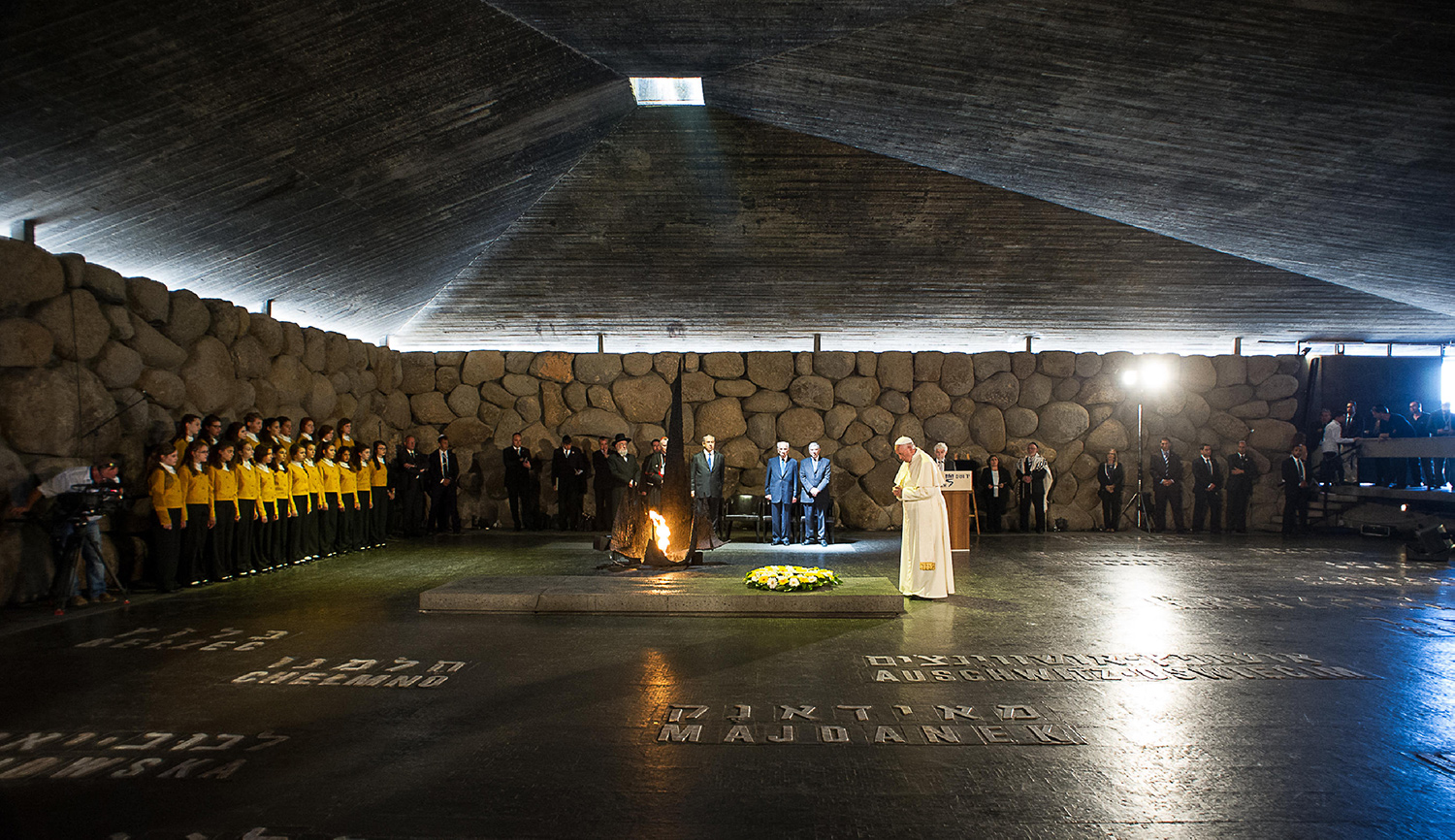 Pope Francis at Yad Vashem in Jerusalem in May 2014. Eric VANDEVILLE/Gamma-Rapho via Getty Images.

Gavin D’Costa deserves great credit for his essay in Mosaic investigating the theological basis for a Catholic Zionism. I admire his careful construction of a bold and suggestive narrative, which begins in the early 1960s with the Second Vatican Council’s epochal document Nostra Aetate, proceeds through an evolving high-level Jewish-Catholic dialogue, and culminates in recent progress toward anchoring these efforts in a definitive affirmation by the Church of the Jewish homeland in the state of Israel.

Also welcome is D’Costa’s account of the prehistory of this coming-together of Catholics and Jews: a remarkable chapter of intellectual history about which I, too, have written in a review-essay on John Connelly’s From Enemy to Brother: The Revolution in Catholic Teaching on the Jews 1933-1965. The emergence of a Zionist movement within the Church can only be predicated on the latter’s deep excavation of its past and a frank admission of its culpability. The long and shameful history of Catholic anti-Judaism has been acknowledged by the Magisterium, the Church’s teaching authority, but the consequences that should flow from it have yet to be followed through on.

Finally, that Catholic doctrine is not static but dynamic, developing, and irreversible has been accepted ever since the time of John Henry Newman (who will be canonized next month). So it is, too, with Church teaching on the Jewish people and the land of Israel. I agree with D’Costa that “when popes repeat teachings, those teachings slowly enter the bloodstream of the Church”; hence, in his words, “there can be no going back.”

The three most recent popes—John Paul II, Benedict XVI, and Francis—have all made outstanding contributions, some of them recounted by D’Costa, to the rapprochement of Catholics and Jews. It is surely also significant that all three have cultivated close personal and intellectual ties with Jewish friends. The evidence of such influence is prominently visible in the voluminous writings and utterances of the first two popes, one a Pole and the other a German, both of whom regarded an adequate response to the Shoah as an existential test for Catholicism. Who can forget the aged John Paul’s pilgrimage to Jerusalem, the first pontiff since Peter to set foot there, or the prayer-petition that he left in the Western Wall, imploring God’s forgiveness and committing his fellow Catholics “to genuine brotherhood with the people of the Covenant”?

Benedict, for his part, eschewing all ecclesiastical condescension of the past, looked up to Jews as scholars, sages, and prophets, seeing their survival in the Diaspora as a model for the Church itself. Even in retirement from the papacy, he has continued to reflect on God’s irrevocable promise to the Jewish people. In a long, learned, and controversial German-language article published last year in the journal Communio, Benedict (now ninety-two) made clear that the Church has no mission to the Jews but rather is called to “dialogue” because Judaism and Christianity are “two ways of interpreting the Scriptures.” The seed of these ideas was surely sown in his early years by his reading of the Jewish philosopher Martin Buber and perhaps also of Franz Rosenzweig.

Crucial in the case of the current, Argentinian-born pontiff, much more distant geographically from the catastrophe of European Jewry, was the role of Abraham Skorka, a prominent rabbi in Buenos Aires. Long before his election as Pope Francis, the two friends published a book of conversations, On Heaven and Earth, which gives ample evidence that the then-Cardinal Bergoglio had acquired from Rabbi Skorka a good grasp of how much Christianity owed to the Hebrew Bible. Francis’s engagement with the Jewish people has been less intense than that of his two predecessors, but there is no doubting his respect for the “elder brothers.” The Wojtyla/Ratzinger legacy has enabled the Church and the Jews to enjoy a better modus vivendi than at any time in history.

Where D’Costa’s argument becomes more problematic is in relation to Israel.

As he observes, the Vatican attaches great weight to the churches of the Middle East, all of which have been more or less hostile to the Jewish state since its inception. This hostility has endured, despite the indisputable fact that Israel has treated its Christian minorities incomparably better than have any Muslim countries in the region.

In their own implacable resistance to overtures from Israel, leading Palestinian Christians in particular have tended to be, as it were, more Islamic than the caliph. Inevitably, their influence has been growing in global Catholicism as it has elsewhere in Christendom. Similarly, the decision by the United Nations General Assembly in 2012 to recognize “Palestine” as a “non-member observer state” has also had an impact at the Vatican. The Holy See, which enjoys the same “observer-state” status at the UN, followed the crowd.

This, indeed, became an issue when Pope Francis visited the Holy Land in 2014. Unlike John Paul II and Benedict XVI, who had visited Jordan, Israel, and the West Bank in that order, Francis made a point of entering Israel only after the West Bank, where he paid a visit to Mahmoud Abbas, “the president of the state of Palestine,” before basing himself in the papal nuncio’s residence in eastern Jerusalem. He also insisted on meeting Prime Minister Netanyahu in the Notre Dame complex, a Vatican sovereign territory located on the old dividing line between Israeli and Arab Jerusalem.

All of this symbolism was designed to remind Israelis that the pope took no cognizance of Jerusalem’s status as their capital, or of any Israeli presence beyond the pre-June 4, 1967 borders. To add insult to injury, Francis also made an unscheduled stop en route from Palestinian refugee camps to pray at the separation barrier, deliberately choosing a backdrop of graffiti carrying slogans like “Apartheid Wall.” This became the image of the papal visit. The contrast with John Paul’s prayer at the Western Wall could not have been more graphic.

Concluding his essay, D’Costa writes: “If the Israel-Palestinian dispute were to be solved tomorrow, with the full agreement of both parties and with international support, I believe Catholic Zionism would emerge quite quickly.”

The operative word here, evidently, is “if.” But even if one grants the premise, it is hard not to feel some skepticism about this thought experiment. Given that the attitude of the present pope toward the Jewish state is markedly less enthusiastic than that of his immediate predecessors, it is clear that even if the theological groundwork for a future Catholic Zionism is now in place, the practical obstacles to such a movement are still insurmountable.

Indeed, while the intellectual currents identified by D’Costa may be reversing former ecclesiastical hostility to Zionism, the diplomatic tide is running in the opposite direction. It was only in 1993 that the philo-Semitic pontificate of John Paul II belatedly formalized relations between Israel and the Holy See. Under today’s first non-European pope, the Vatican seems more interested in protecting its global interests, especially in Muslim countries, than in promoting a political theology that could form the basis for a Catholic Zionism.

Of course, Zionism is a secular rather than a religious tradition. Yet it is rooted in a place, a Holy Land, with a uniquely messianic resonance and expressing in Jewish texts and prayers a sustained, millennia-old conviction of return. D’Costa demonstrates that the Church has now, at least implicitly, conceded that God’s irrevocable promises to Israel include His gift of the land in which, in addition, Jews alone have maintained a continuous physical presence since biblical times. But it is a very long way from a de-facto acceptance of the Jewish state to a Catholic form of the Christian Zionism so familiar from evangelical Protestantism.

When, just recently, I mentioned the idea of Catholic Zionism to a very senior cardinal who is unusually well-versed in, and positive toward, the theological developments on which D’Costa’s thesis relies, he actually found the very concept hard to grasp, let alone to approve of. My impression was that, while not questioning Israel’s legitimacy, he saw the phrase “Catholic Zionism” as an oxymoron, yoking together a spiritual doctrine and a secular ideology. Or maybe, like many of his colleagues, he shares the view of the Second Vatican Council, which, Nostra Aetate notwithstanding, still taught that “the Church is the new people of God.”

Thus, despite John Paul II’s repudiation of the idea that the new covenant supersedes the old, and despite the Jewish-Christian dialogue begun by him and continued under Benedict XVI, replacement theology has yet to be replaced. Which means that the Church is still decades, perhaps generations, away from embracing the full implications of its recognition of Israel. For that embrace to become a doctrinal reality would require not only a miracle, as D’Costa himself implies. It would also require a leap of faith.