Americans may soon face the unfamiliar challenge of a rival with as many resources as the U.S. has, or more: precisely the situation in which Israelis have always excelled. 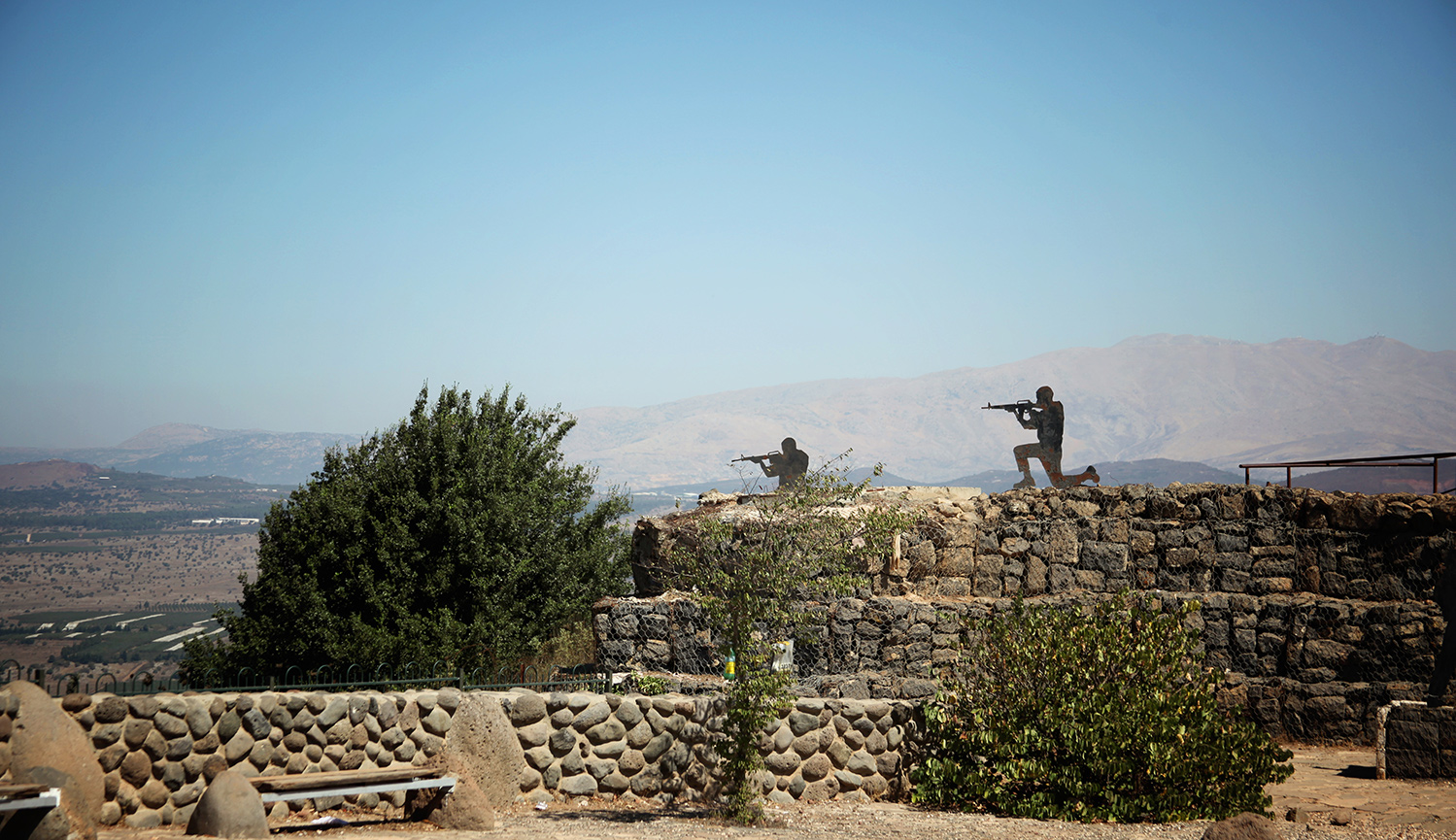 Military decoys at the top of the Golan Heights. Moment via Getty Images.

Response
Vance Serchuk
About the author


Vance Serchuk is the executive director of the KKR Global Institute and an adjunct senior fellow at the Center for a New American Security.

In a 2018 essay for Mosaic titled “Israel and China Take a Leap Forward—But to What?,” Arthur Herman made a timely and consequential contribution to the U.S.-Israel alliance by illuminating some of the dilemmas posed to it by intensifying Sino-American rivalry.

In particular, Herman argued that since mastery of sophisticated, dual-use technologies like artificial intelligence (AI), unmanned systems, and quantum computing are vital terrain in the strategic competition with China, it was incumbent on Israel to establish stronger protections to ensure that its own world-class private-sector companies working in these areas would not be captured by Beijing, through foreign investment, and then leveraged for strategic advantage against the Americans.

In that earlier essay, Herman also flagged the related dangers implicit in Israel’s opening its infrastructure to ownership and operation by Chinese firms. Despite these undertakings’ being ostensibly commercial, he explained, Beijing could exploit its access to critical facilities like maritime ports and next-generation telecommunications networks for intelligence gathering and influence operations. In addition to jeopardizing Israel’s sovereignty, Beijing’s presence was bound to deter and restrict the U.S. military in its own interactions with Israel.

Now, in “The Impasse Obstructing U.S,-Israel Relations, and How to Remedy It,” Herman has written a sequel of sorts. Having sounded the alarm about the perils of a laissez-faire approach to Chinese capital on the part of the Jewish state, his latest essay conjures up a more hopeful, alternative vision of Israel as a potential arsenal of innovation from which the United States and other democracies can draw in their techno-military rivalry with Beijing. Rather than a point of vulnerability for China to exploit, he argues, America’s relationship with Israel can instead be a source of asymmetric advantage for Washington and its friends against the PRC.

In its broad strokes, Herman’s new essay once again offers a wealth of perceptive observations and provocative ideas. At the highest level, the essay illustrates how mistaken both the Obama and the Trump administrations have been to assume that the elevation of “great-power competition” in American foreign policy entails a pivot away from the Middle East. In fact, the region is better understood as a vital arena for the global rivalry with China, and also with Russia, rather than a distraction from it. Access to Israeli technology is one reason why.

What is less clear is whether Herman’s proposal for a Defense Trade Cooperation Treaty (DTCT) between the United States and Israel—modeled after similar pacts reached by Washington earlier in this decade with Great Britain and Australia—is the best mechanism for catapulting defense-technological partnership between the two countries to the next level.

First, at least in the U.S. and also to a great extent in Israel, the most cutting-edge work in the transformational technologies that Herman has highlighted, like AI and robotics, is not being done by traditional defense companies or by government at all. In fact, the technologies themselves are predominantly being developed by profit-minded private companies for civilian applications; indeed, that is precisely why heightened scrutiny around foreign investment in such firms is necessary but also much more complicated than a simple ban on the sale of military products to Beijing. Given that so much of the most sensitive and consequential innovation is taking place outside the conventional defense sphere, Herman fails to explain why a trade agreement to spur greater cooperation between the U.S. and Israeli defense industries answers the needs of the moment.

Second, as Eran Lerman in his own response to Herman’s essay has astutely observed, the U.S.-Israel relationship tends to thrive in informality. With that in mind, one wonders whether the intensive bureaucratic, political, and intellectual energies that would inevitably be consumed in order to formulate, negotiate, and pass a DTCT through the U.S. Senate might not be better focused on one or two discrete joint projects. Drawing technological expertise from outside each country’s traditional defense sectors, such initiatives could aim at developing a concrete new capability that addresses a shared and concrete problem, along the lines of Iron Dome.

Third, I fear Herman overestimates the extent to which Israel is likely to align itself explicitly with the United States against China or sign on to an endeavor that is outwardly billed as targeting Beijing’s military. Israeli foreign policy has traditionally been informed by a healthy sense of realpolitik, and it is far from clear what exactly Jerusalem could gain from adopting a posture of unbridled hostility toward a rising global superpower that has not positioned itself as an antagonist of the Jewish state. Policymakers in the U.S. and China have increasingly concluded that each country poses a first-tier strategic challenge to the other; whatever the wisdom of those judgments, why should an Israeli government reach the same conclusion about Beijing, especially when (as Herman himself acknowledges) Jerusalem has a number of other, much more pressing national-security priorities to deal with?

To be sure, as Elliott Abrams persuasively expounded in a response to Herman’s earlier essay, Israel derives overwhelmingly more from the United States than it does from Beijing. For this reason, it is perfectly appropriate for Washington to expect Israel to exercise restraint with respect to the sensitive technological capabilities it makes available to Beijing through commercial channels and also to recognize, as the Trump administration has laid out, how seemingly innocent investments by China today could be weaponized to restrict Israel’s sovereignty tomorrow. But to expect Israel, as an extension of its relationship with the United States, to declare China an enemy strikes me as a formula for alliance overstretch—with the potential to result in precisely the estrangement that Herman seeks to avert.

Still, Herman is deeply correct in his intuition that Americans would do well to look to Israel as they contemplate their own extended rivalry with China, albeit not in the principal way that he has outlined in his essays.

Historically Americans have responded to geopolitical challengers by trying to overwhelm them with superior resources, both quantitative and qualitative. This is an instinct cultivated over centuries of experience, from the conquest of the North American continent through two world wars and into the modern era. Briefly put, the United States has generally prevailed by having better stuff than its opponents, and vastly more of it.

This approach has led not only to America’s greatest military victories but also to its most searing debacles. The wrenching quagmire of Vietnam, the bloody humiliation of Black Hawk Down, and the unsatisfying stalemate of the post-9/11 wars all illustrate the extent to which nearly inexhaustible reserves of wealth and cutting-edge technology are not necessarily decisive in conflict: a reality that the American imagination still struggles to make sense of.

China, by contrast, presents a more linear problem for U.S. policymakers: namely, the prospect, for the first time in history, of a strategic competitor whose economic throw-weight, industrial base, and scientific expertise are on a trajectory to match and then exceed America’s own. In this sense, China’s rise not only threatens America’s current preeminence atop the geopolitical wheel of fortune; it also means that, in a straightforward weighing of material resources, America cannot hope to overwhelm Beijing as it did prior challengers. On the contrary, it is the U.S. that, if current trends continue, is in danger of being overwhelmed.

That being the case, one option would be to reverse the trend lines: to preserve and extend the material edge the U.S. still enjoys against Beijing. Unsurprisingly, this has been one of the major themes of the Trump administration’s approach to the China challenge—attempting to slow and disrupt Beijing’s transfer to itself of know-how from the U.S. and other advanced economies while simultaneously invigorating domestic research and development in critical areas. And this, indeed, is the conceptual framework that Arthur Herman has applied to his analysis of the U.S.-Israel alliance.

Yet it is worth recalling that the greatest successes of the Jewish state have owed less to the intrinsic superiority of its technology than to the creativity and courage with which Israelis have employed that technology. In many cases, Israel has utilized U.S. weapons systems but in ways never imagined, much less sanctioned, by their designers—and has done so to spectacular effect. Precisely because Israel does not enjoy the illusion of having infinite reserves of materiel from which to draw, it has been compelled to be thoughtful, deliberative, and unorthodox in how it uses everything at its disposal.

This, more than any breakthrough algorithm in the realm of AI, is what the United States must now cultivate for its long-term strategic rivalry with China. While Washington has been quick to conceptualize great-power competition as a series of technological arms races, the Israeli experience offers a more nuanced lesson. To be sure, the U.S. must do everything possible to preserve its qualitative military and scientific edge. But in the face of a near-peer challenger, that is not enough.

Instead, like Israelis, Americans must devise ways to stretch their available resources farther and be more intellectually creative in how they project the power they have. Simply put, precisely because the United States is unlikely to be able to outspend or outgun Beijing successfully, it must instead learn how to outmaneuver and outsmart its rival.

Ze'ev Maghen
December
The Impasse Obstructing U.S.-Israel Relations, and How to Remedy It
5. Response

Israel Can Teach America How to Be More Creative in the Face of Powerful Adversaries
1. Essay

Israel Shouldn't Draw Fixed Lines Between Itself and China
3. Response

How to Reframe the American-Israeli Alliance in a New Age of Great-Power Competition
4. Response

Israel Is a Tech Superpower, and America Needs It on Its Side
6. Last Word