A group of former Israeli defense officials argue that the state can manage without the Jordan Valley. Here’s why they’re wrong. 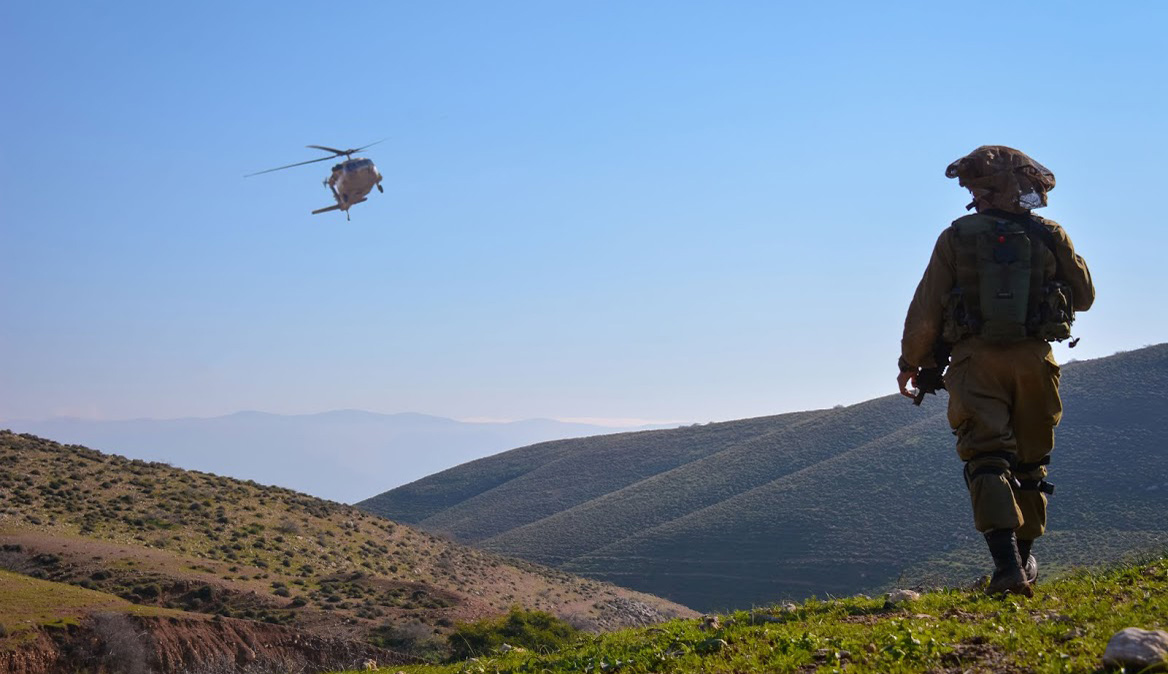 Symposium
Gershon Hacohen
About the author


Maj. Gen. (res.) Gershon Hacohen served in the IDF for 42 years, commanding troops in battle on the Egyptian, Lebanese, and Syrian fronts. Today he directs many of the IDF’s war-simulation exercises.

It is right for Israel to expand its eastern border to incorporate parts of the West Bank. Having served in the IDF for more than four decades, having commanded Israeli troops on the battlefields of Egypt, Lebanon, and Syria, and having directed IDF war-simulation exercises (my current line of work), I believe that Israeli security requires control over parts of the West Bank including the Jordan Valley. The proposed plan is closest to the thinking of none other than the late prime minister Yitzḥak Rabin, and it does not pose a demographic threat to Israel. Having made my position clear, let me explain why all this is so.

In the West Bank and the Jordan Valley, the state of Israel has three principal interests: defensible borders, space for the development of Israel beyond the narrow coastal strip where 80 percent of today’s industrial, technological, and population infrastructure is concentrated, and a link with Jewish history and heritage that is embodied in landscapes harking back to biblical times.

Let’s look first at the issue of defense. It has never been and will never be sufficient to dot Israeli troops sparsely across West Bank hilltops and along the Jordan Valley. Instead, long-term Israeli sovereignty and settlement is needed across the West Bank to ensure Israeli security.

This essential position is not well understood in the West, in large part because of the efforts of a group of former Israeli security officials, lately organized under the banner of “Commanders for Israel’s Security,” who mistakenly argue that Israel can manage by maintaining modest forces in the Jordan Valley until a permanent settlement with the Palestinians is reached. The foundation of their position is that Israel should withdraw (with minor adjustments) to the borders as they were in 1967, before we conquered the West Bank during the Six-Day War. These commanders think that Israel is basically capable of defending itself on the line set by Highway 6 (the Trans-Israel highway) which runs north-south near the Green Line.

As I’ve explained in a long study on this issue for the Begin-Sadat Center for Strategic Studies, these officials greatly overestimate the power of the Israel Defense Forces and dangerously underestimate the security challenge that could emerge from the West Bank. We simply cannot make do with limited forces along the Jordan Valley—especially if, as the American proposal envisions, the Jordan Valley borders an independent Palestinian state at some point in the future.

One need only look at the recent past to understand why. When one takes into account the lessons of the second intifada twenty years ago, the regional instability wrought by the badly-mislabeled “Arab Spring” ten years ago, the continuing rocket and missile threat from Hizballah in Lebanon and Hamas in the Gaza Strip, and the unimpeded growth of Iran’s presence on Israel’s borders, including inside the West Bank and Gaza, then it becomes clear that the Jordan Valley buffer zone becomes an essential shield for Israel. Even the stability and longevity of the Hashemite Kingdom of Jordan cannot be guaranteed if Israel abandons the scene.

While the latter threat may seem remote at present, the Iranian Quds Force and its Shiite militia allies are aggressively seeking to penetrate the West Bank from Jordan, destabilize it, and exert control. It is the same playbook they have successfully followed in Syria and Yemen.

Some foreign advisors have proposed that foreign troops—peacekeepers—and technological means—sensors, unmanned aircraft, satellite photography, a stronger security fence, and so on—could obviate the need for Israeli troops in the Jordan Valley. The American general John Allen was tasked with drafting such a plan by the Obama administration. His plan accepted as a point of departure the Palestinian demand for full sovereignty without any presence of IDF forces from the boundary of the Jordan River to the 1967 lines in the mountains above Tel Aviv.

The Allen plan was and is a non-starter. Foreign military forces operating in a totally unfamiliar arena—unfamiliar geographically, unfamiliar mentally, unfamiliar culturally—will never be an adequate replacement for the IDF, which has operated continuously there for over 50 years and intermittently for over 70 years. Besides, Israel’s experience with international forces—in the Sinai, in Lebanon, in the Golan, and more—is decidedly negative.

How does acting on the American proposal and extending Israeli sovereignty figure into this picture? It’s simple: applying Israeli law to the Jordan Valley will take General Allen’s cockamamie, if well-intentioned, notions off the table permanently.

So much for security factors, which form the major part of the current case for annexation. But, as I’ve said, there are other components to the case too. Israel needs the Jordan Valley (and significant parts of Area C of the West Bank) for its development and growth. Israel’s population is expected to increase from 9 to 15 million people over the next decade; the National Planning Authority has called for the building of 2.6 million housing units by 2040 to keep pace.

But to concentrate all this civilian home construction within the narrow state of Israel on its 1967 borders is a major mistake. For ecological and basic urban planning reasons, the Israeli center of gravity must shift to the east, with hundreds of thousands of new housing units that should be built in Mishor Adumim just to the east of Jerusalem and in Ma’aleh Efraim further off to the north.

But in the existing national master plan, the West Bank is a black hole, absent from government planning. To effect a systemic change, a change in orientation is required of all government ministries. This will not happen without the application of sovereignty to the parts of the West Bank that are outlined in the American plan.

My colleague Major General Amos Gilad, claims that there is no need to extend sovereignty if Israel wants to continue building in the West Bank and the Jordan Valley. According to him, the Jordanians do not actually oppose such construction. What they oppose, Gilad says, is the declaration of sovereignty, which will cause popular and diplomatic blowback and, the Jordanians worry, threaten their own regime. But he is wrong on two counts. First, it may be the case that for the establishment of one more farm or settlement community there is no need to extend Israeli sovereignty. But for the scale needed, everything depends on a long-term plan, and this requires sovereignty. Second, as mentioned, Israel’s freedom of maneuver in the Jordan Valley strengthens Jordan’s own security no less than Israel’s. The terrorist elements that wish to harm the Jewish state harbor no great love for the Hashemite Kingdom to our east, either.

Though you won’t hear it said much, the new American plan sensibly reverts to the way that former prime minister Yitzḥak Rabin thought about the West Bank.

Contrary to the near-total Israeli withdrawal to the 1967 lines envisioned in the “Clinton Parameters” concocted in 2000, or in the helter-skelter withdrawal plans drawn by the former Israeli prime ministers Ehud Barak and Ehud Olmert the decade following, Rabin insisted on the inclusion of defensible borders in any peace deal.

The difference between Rabin’s view, as presented in his last speech to the Knesset in October 1995, and the Clinton-Barak-Olmert paradigm comes down to three essential elements. Rabin insisted on an integrated and unified Jerusalem, with a very broad security and settlement envelope surrounding it. This meant Israeli control of the Jordan Valley. Rabin: “The security border for Israel’s defense will be set in the Jordan Valley, in the broadest interpretation of this concept.” And Rabin insisted that Israel would only contemplate a possible Palestinian entity that was “less than a state.”

Clinton and then Barak and Olmert abandoned all three of these essential red lines.

Benjamin Netanyahu has spent the last decade trying to reassert these principles and make clear that Israel will not rush into any withdrawals that don’t accord with the red lines articulated by Rabin. That is why he has never agreed to Mahmoud Abbas’s oft-repeated demand that Israel-Palestinian negotiations resume from “the point where Olmert left off.” The new American plan essentially accepts the Rabin/Netanyahu perspective on all three of the key issues described above. In this way, it is a true and greatly needed paradigm shift.

The American plan also accords with another key Rabin concept (which I believe Netanyahu shares): that Israel wants to end its rule over the Palestinian public.

The new plan does not involve any re-occupation of populated areas by Israel. It allows for Israeli sovereignty to be extended over up to 30 percent of the West Bank—parts of Area C where Israel has its settlements and military bases. The Palestinian population in these areas is minimal. There are no grounds to worry that as part of the plan Israel will revert to ruling by force over millions of Palestinians in the West Bank and Gaza and thereby risk losing its Jewish majority. The so-called demographic threat which the left brandishes as a key reason for its opposition to the American plan and the possible annexations is a mirage, a misreading of facts.

These, then, are the goals, spoken and unspoken, that Israel hopes to achieve in pursuing annexation this summer. I would like to draw attention to one additional breakthrough contained in the American plan: it recognizes the Jewish people’s historical rights, and not just security needs.

In so doing, it joins the ranks of the Balfour Declaration and other historic plans in seeing Israel as more than a place of refuge for Jews, as deserving more than “secure and defensible borders.” It, rather, sees the rebirth of the people of Israel in the land of its ancestry as a noble and just development. And this is a crucial step in salving a distorted and wounded international discourse about Israel, and indeed about the Jewish people.

Mor: Annexation Would Be a Missed Opportunity
6. SYMPOSIUM