This is a response to Examining Israel’s Eastern Borders: A Symposium, originally published in Mosaic in June 2020 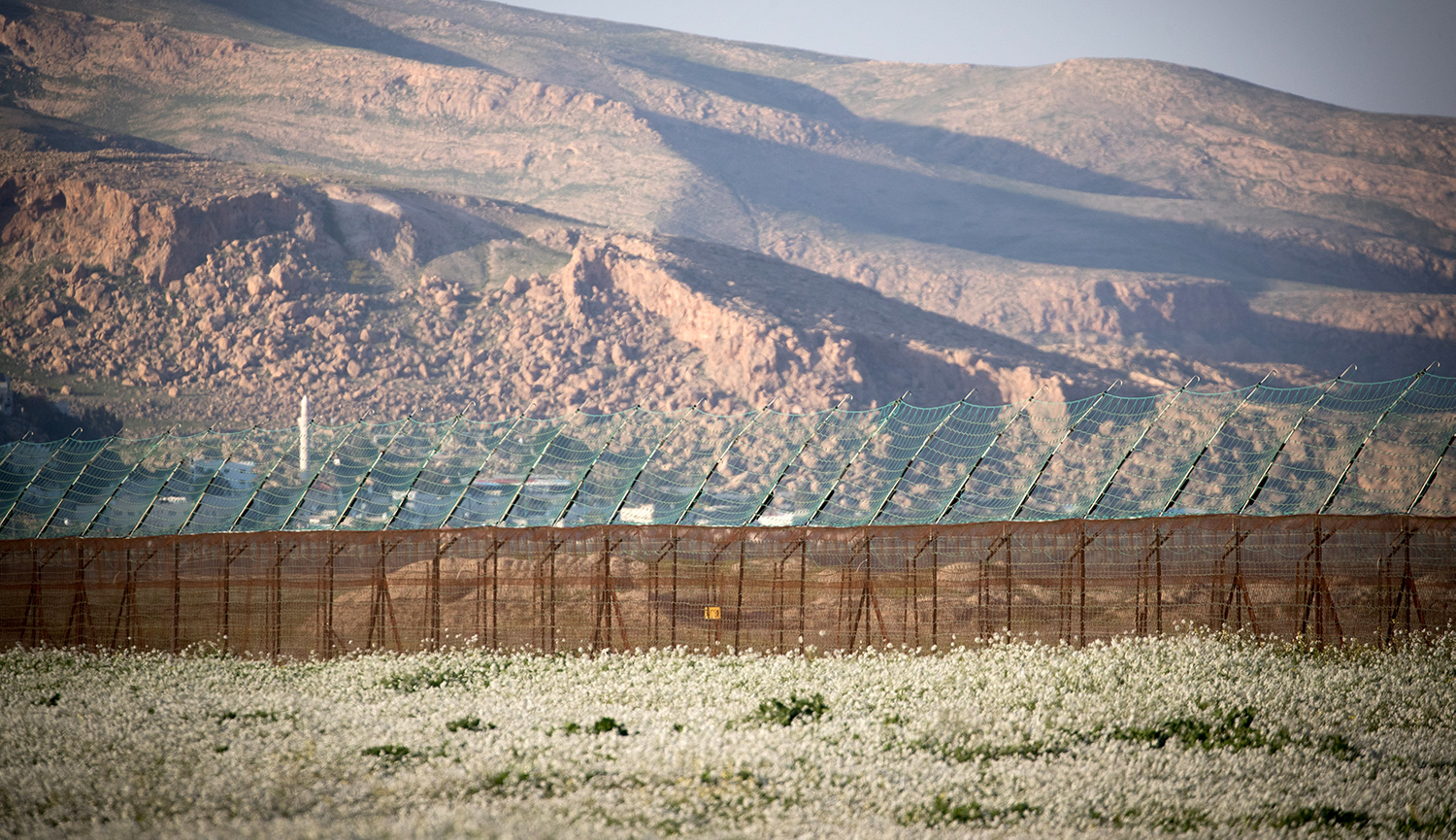 View of the border fence between Israel and Jordan in the Jordan Valley on February 13, 2019. Yonatan Sindel/Flash90.

Israel is near the end of a long-term journey to set its final borders. The current discussion about a possible Israeli decision to extend its sovereignty over some territories west of the Jordan River—also known as annexation of parts of the West Bank—should be understood in this context. What’s going on now is less about the grand reckoning between competing visions of the Jewish state that some portray it as; it’s really more about the setting of Israel’s last frontier.

At its birth in 1948, Israel did not have a single settled border, except perhaps with the non-belligerent Mediterranean Sea. Having failed in war to prevent the Jews of the land from attaining independence in the land, Israel’s Arab neighbors refused to accept their failure. Rather than peace, the most they were willing to concede was a cease-fire in an ongoing war.

Thus the agreements negotiated to end the Arab-Israeli war of 1948 were specifically designated cease-fire agreements, meant to provide the Arab side with an opportunity to regroup in order to resume the war against the young state at a later stage (which they attempted and failed to do several times in subsequent years, failing most spectacularly in 1967). After 1949, Israelis proceeded to build their country within those cease-fire lines, but acting as if they were borders did not make them so. Neither does the act of referring to the 1948 cease-fire lines as “pre-1967 borders”; Israel’s Arab neighbors did not recognize them as borders.

Israel did not have an internationally recognized border for three decades until, at last, the southern border was finalized in the 1979 peace treaty with Egypt. Attaining its next internationally recognized border, to its east, with Jordan, took another fifteen years. It was in 1988 that Jordan renounced its claims to the territory on the West Bank of the Jordan River; in the context of the Oslo process, Jordan signed a peace agreement with Israel in 1994.

Israel’s borders with Egypt and Jordan remain to date its only internationally recognized, bilaterally agreed-upon borders. But it does have some other borders that enjoy some, if lesser legitimacy and recognition. To the north, Israel’s border with Lebanon reflects the old line between the British and French Mandates, as well as the 1949 cease-fire line. This ostensible border gained greater international legitimacy in 2000 when Israel ended its eighteen-year war in Lebanon by retreating to this line, and when both sides agreed that the United Nations “Blue Line” as delineated by UN cartographers, would be respected by both sides.

Another retreat, from Gaza in 2005, further contributed to setting Israel’s border to the south. Although the Gaza disengagement was conducted unilaterally, Israel did take pains to fully retreat to the lines of the 1949 cease-fire, known as the Green Line. The agreement signed in November 2005 between Israel and the Palestinian Authority (which then ruled Gaza) served to place some additional international legitimacy on this line.

The last border to gain some measure of legitimacy is in the Golan Heights, where, 38 years after Israel’s official annexation of the territory in 1981, it was officially recognized as Israeli territory by the U.S. in 2019.

These processes have also ended, for all intents and purposes, the domestic debate within Israel about its borders. The borders with Egypt, Jordan, and Lebanon are settled and are no longer disputed. The Gaza border has nearly the same status; however much some people still resent Israel’s removal of the Jewish settlements there, or consider disengagement from Gaza a mistake, there is no constituency for re-occupying it. Likewise, Syria’s descent into civil war, the Iranian presence there, and the American recognition of Israel sovereignty have all but ended the Israeli domestic debate about whether to keep the Golan Heights.

All that remains is to finalize, in one way or another, the last unresolved section of Israel’s eastern border, the part that was not determined in its peace treaty with Jordan.

The Palestinians have for decades now made it clear that they will not sign a bilateral agreement with Israel to set this border, as they remain committed to an Arab Palestine “from the River to the Sea.” Meanwhile, Gaza has been transformed into a Hamas-ruled rocket base. Because of these two factors, certain parameters for setting this final section of the border now enjoy wide agreement within Israel: The Israel Defense Forces will remain the only military power west of the Jordan River; the Palestinians will have some form of self-rule in some part of that territory; and Israel will do its utmost to avoid removing settlers.

The reasons for each element of the consensus just articulated are also easy to understand. For most Israelis, military withdrawal from the West Bank altogether is too great a security risk; annexing the entire territory of the West Bank would bring a mass Palestinian population into the state of Israel, which would endanger Israel’s future; and removing settlers en masse would provoke social and political turmoil that is simply not worth the exchange for anything less than full and true peace.

The current American peace plan comprehends this Israeli consensus and therefore appeals to the large Israeli center. It establishes the Israel Defense Forces as the only military force west of the Jordan River, it provides a pathway for Palestinians, with limited political self-rule, to establish a state of their own on 70 percent of the territory of the West Bank, and it does not entail the removal of settlements. For most Israelis, this is good enough, especially if it is supported by the U.S. and even provides a basis for further normalization with Arab states.

By effectively placing a ceiling on Israel’s settlement project, in the form of an official map that sets aside more territory for the Palestinians than they currently control, the American plan brings Israel one step closer in the long and messy process of determining the last section of its eastern border. While this ceiling is much higher and allows more settlement than some on the left think wise or desirable, it is much lower and allows much less than what is envisioned by some on the right.

Indeed, there are settlers who believe that the ceiling envisioned in the American plan will actually prove to be a floor, a point of departure for further settlement activity in the future. Defenders of this view believe that the current proposal to extend sovereignty to less than the totality of Area C is wise, even though doing so could mean providing hitherto unheard-of settler legitimacy to the idea a Palestinian state. Why? Because they think Palestinian rejectionism is bound to yield ever more opportunities to extend Israeli sovereignty over even more territory, while in the process ensuring that a Palestinian state will never emerge.

Other settlers are, on the other hand, concerned that this ceiling will actually prove less favorable to their cause, as the settler enclaves it creates inside the Palestinian state will become even less practically tenable to defend than they are today. Mainstream Israelis, this faction of settlers predicts, will therefore increasingly wonder why such isolated enclaves are necessary, and why Israel needs to extend its eastern border by hundreds of kilometers in a winding mess just to include a small number of settlers within its sovereign territory.

Though I suspect that the current range of plans will place a ceiling on Israel’s settlement project, and that over time they will lead to an improved and less winding border as the settlement enclaves become untenable, there is no sure way of knowing right now which dynamic is more likely to play itself out; that lack of clarity is the main reason most Israelis prefer the current status quo and do not understand why they’re being troubled by the prospect of annexation at this time.

As Israel moves a little bit closer to finalizing the last section of its eastern border, the process is bound to prove messy. It will not have the neat finality of a bilateral agreement with an established state as it did with Egypt and Jordan. It will not provide the clarity of a strategic retreat to a demarcated line as with Lebanon and Gaza. It will not offer the moral and political simplicity of annexing territory that is of clear strategic value and that lacks a civilian population as it did with the Golan Heights. But it will be an answer to a decades-long question nonetheless.

We should therefore not mistake debates over how best to answer that question for some great moral conflict over the future of Israel. What’s happening is neither a descent into one-state apartheid, as some on the left contend; nor is it the beginning of salvation as some of the right argue. We are in the final stretches of a process that establishes the state of Israel as a permanent state in the region with recognized borders. Nothing more, but also nothing less.