An American-led alliance can be a strong deterrent to Iran and China. 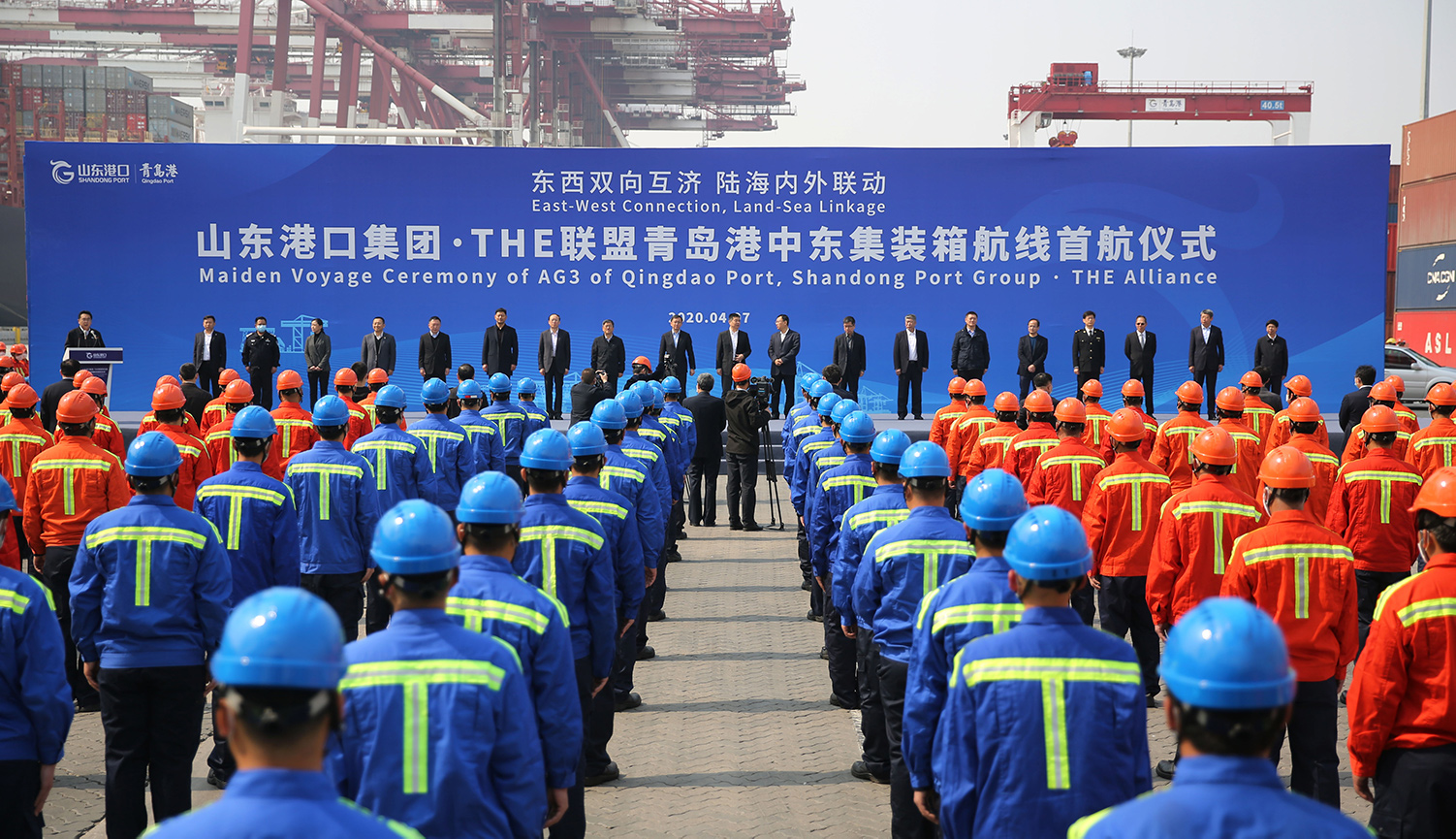 The launch of a new shipping-container alliance running between the Middle East and China in Qingdao on April 7, 2020. Costfoto/Barcroft Media via Getty Images.

Symposium
John Bolton
About the author

Not every diplomatic breakthrough is a home run, but solid singles and doubles, added together, make for winning (and sometimes championship) seasons. The recent Israel-United Arab Emirates agreement falls into this latter category. So saying does not diminish its significance, but actually helps demonstrate that “normal” diplomatic progress between former adversaries is, in the Middle East, a considerable success.

Regional experts rightly agree that the deal, years in the maturing, reflects the clearly emerging reality rather than representing an unexpected new departure. The corollary is that moving toward normalized relations hardly means all contentious issues before the two parties have been resolved. The Palestinian question is deferred, not answered, to the dismay of some and to the relief to others. The UAE embassy is not likely to be in Jerusalem. The reactions of Turkey and Iran show that some already-fraught relations will grow even worse. And unsurprisingly, enthusiasm in Europe was notably subdued, meaning that considerable hard diplomatic work remains to prove the obvious in continental capitals. Middle East peace is not at hand.

Nonetheless, recognizing, signifying, and absorbing reality, as the Israel-UAE deal does, is one more step forward. Especially in confronting Iran’s regional threats, which are urgent and palpable, it matters that Abu Dhabi and Jerusalem (Israel’s capital no matter where embassies are located) will achieve full diplomatic recognition. And the worldwide menace of China, this century’s existential issue for the United States and the West as a whole, will hopefully face stronger, more coherent opposition in the Middle East.

The Israel-UAE agreement thus represents not only progress locally, but the region’s inexorable transformation from a place where great-power rivalries are fought out, to one that takes its part in larger global struggles. Ironically, many in the region undoubtedly would prefer not engaging in these larger battles, but that luxury is fast disappearing.

The deal’s timing was also important, particularly given November’s presidential election in America. There is, unfortunately, far more at risk in our upcoming voting than the regional players may have realized. Locking in elements of the Middle East’s new correlation of forces (as the Soviets put it) is an insurance policy for all involved.

There is little doubt, for example, that a Biden victory will revive dreams of a new nuclear deal with Iran. While it’s hard to imagine something worse than the 2015 JCPOA, there will be those in Biden’s White House working feverishly toward that goal. And, as with most Europeans, the two-state solution for the Palestinians has near-eternal life in the mainstream Democratic party. Much worse lies in the party’s left wing; its influence in a Biden administration is presently unknowable, but it will doubtless be unhelpful to whatever extent it manifests itself.

No one, however, should assume that Donald Trump’s re-election would be much better. Whether, in a few years, any U.S. forces will remain in Syria, Iraq, or Afghanistan, or even long-standing bases in the Arabian Gulf, is very much open to question. Remember what President Trump said in announcing (and taking credit for) the Trump/Abraham Accord:

On Iran, just days before these remarks, Trump said, not for the first time, that “we will have a deal within four weeks” of his re-election. Despite the president’s assurances of amity, in my view U.S. national interests require a sustained political, military, and economic presence in the region.

Normalization between Israel and any Gulf Cooperation Council member makes military and intelligence activities regarding Iran easier and more productive. U.S. and Israeli diplomacy should therefore focus on securing additional new recognitions, perhaps Bahrain and Oman (or, farther afield, Sudan and Morocco). The more instances where Tehran’s adversaries enhance their national-security cooperation, the harder it is for Iran to advance its interests by driving wedges between them.

The Trump administration’s efforts to invoke “snapback sanctions” under Security Council Resolution 2231 will play out in the coming weeks. As I recently wrote in the Wall Street Journal, I oppose this course of action. But whatever the outcome, there is no prospect of any future agreement with Iran that conceivably precludes it from achieving deliverable nuclear weapons, whether negotiated by Trump or Biden. Iran has not made a strategic decision to renounce nuclear weapons. Quite the opposite. The evidence is unmistakable that Iran’s 2015 objective was to achieve the lifting of economic sanctions while making as few concessions as possible on its nuclear program, and it largely succeeded. Tehran’s goals in a second nuclear deal will be the same as the first.

Right now, some unidentified actor is systematically destroying parts of Iran’s nuclear and ballistic-missile programs. This, together with the prospect of regime change ousting the ayatollahs, is the only certain way to preclude an Iranian nuclear capability. One important reason for so doing is preventing further nuclear proliferation in the Middle East, where several Arab states (and Turkey) are stirring as the potential Iranian threat becomes more concrete. Saudi Arabia’s Crown Price Mohammed bin Salman could not have been clearer in 2018, announcing that “if Iran developed a nuclear bomb, we will follow suit as soon as possible.” It would in fact be better for the region if no other power developed nuclear weapons, but the Arab leaders will believe that only if they see U.S. staying power.

Israeli relations with the Emiratis can be a major factor here. One of the less remarked but nonetheless badly flawed aspects of the 2015 deal was allowing Iran to have any uranium-enrichment or plutonium-reprocessing capability. America and Israel will have to work with the UAE and others looking at developing truly peaceful nuclear programs to uphold the “gold standard” for U.S. consent: such peaceful programs are permissible, but must not include the front and back ends of the nuclear fuel cycle. Israeli technology can play a significant role here.

On China, realigning Middle Eastern attitudes will almost certainly be more difficult, but even more essential. The United States is not now entering a cold war with China in the same ideological sense as with the Soviet Union, but the ongoing contest is epochal nonetheless. China’s concepts of “civil-military fusion”; social metrics by which its citizens are to be judged; repression of the Uighurs (which should be noteworthy for Islamic countries); the crushing of the “one country, two-systems” concept in Hong Kong; China’s aggressive nuclear build-up; development of blue-water naval capabilities; offensive cyberwar programs; territorial belligerence in the South China Sea, along the frontier with India and elsewhere; and more, demonstrate what China is up to. This is not the “peaceful rise” of a “responsible stakeholder,” as China’s advocates have long argued. The United States, along with Europe and the Middle East, can either respond to this now, or pay the price later.

Israel itself has been tempted by potential sales into China’s market for weapons systems and other high-tech items. And like the West as a whole, America included, Israel missed early signals of Beijing’s broad efforts to jeopardize Western military capabilities, and specifically to exploit for intelligence purposes fifth-generation telecommunications systems. Britain, for example, only recently reversed course to preclude China’s Huawei from upcoming UK telecoms infrastructure projects. Prime Minister Netanyahu has undertaken yeoman efforts to undo the damage in Israel, but for the West generally, much remains to be done.

So too, the Emiratis and the Saudis have been tempted by China’s “peaceful” nuclear energy capabilities, and ballistic-missile products. Recent reporting on China’s participation in constructing a Saudi Arabian facility for milling and refining uranium ore into “yellowcake” (U3O8 in solid form) is only the latest example. Riyadh, Abu Dhabi, and others have pursued weapons contract with both Moscow and Beijing, and will continue to do so if Congress legislates restrictions against their ability to purchase American weapons. And there is no mistaking China’s strategic objectives in the multi-billion-dollar agreement for port construction in Abu Dhabi as part of Beijing’s “Belt and Road Initiative,” a worldwide Trojan Horse of enormous proportions.

Mutual diplomatic recognition between Israel and the UAE is unquestionably good news. If the two countries, their neighbors, and the United States play the game wisely, history will likely characterize it as a “milestone” in the changing geostrategic environment in the Middle East. The region will continue to change, but bilateral Israeli-Emirati relations will now become more stable. Stability is not in the regional or global forecast in the foreseeable future, even as the instability of past conflicts recedes or disappears.

Samuel Goldman
Peace & the UAE
The Emerging Order of the Middle East
8. Symposium

How the Israel-UAE Deal Demonstrates the Need for American Leadership in the Middle East
1. SYMPOSIUM

What Happens Next with the Israeli-Emirati Accords?
9. Symposium