For a long time, Israel has been quietly making common cause with the victims of aggression in the Middle East. That’s now coming to light. 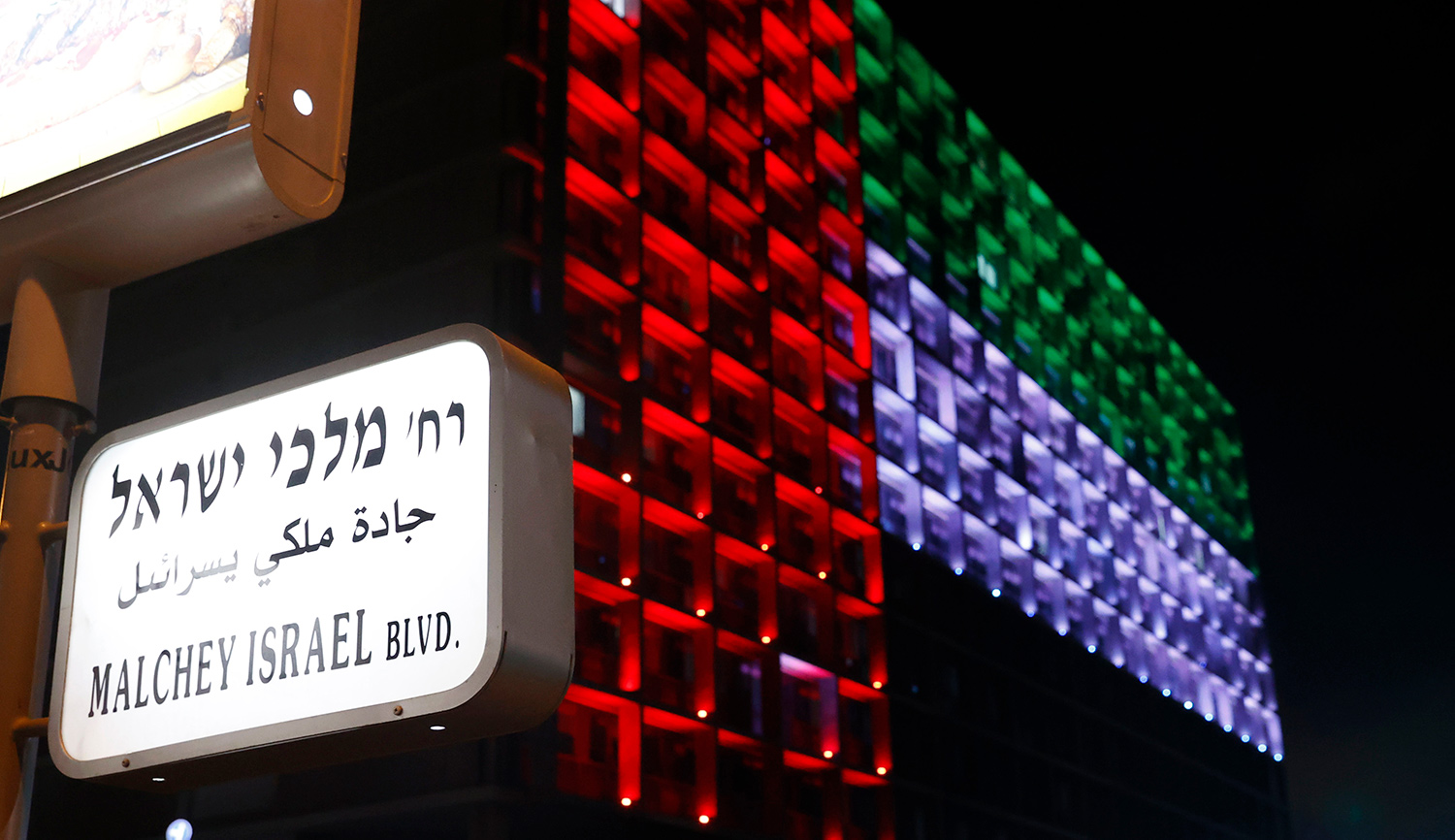 Tel Aviv’s city hall lit up in the colors of the flag of the United Arab Emirates on August 13, 2020. JACK GUEZ/AFP via Getty Images.

Symposium
Dore Gold
About the author


Dore Gold, president of the Jerusalem Center of Public Affairs, is a former ambassador of Israel to the United Nations (1997-1999) and the author of, among other books , Hatred’s Kingdom, The Fight for Jerusalem, and The Rise of Nuclear Iran.

While last week’s news of normalization between Israel and the United Arab Emirates represents a tremendous breakthrough, it is no secret that the two countries have been in contact for many years. Those contacts predate the much-commented-upon cooperation between Israel and the Gulf states (the UAE included) in the past decade and are, in fact, not highly unusual in the Middle East. By seeing the new developments in light of their historical precedents, we can better appreciate their significance.

I recall, years ago, sitting at Tel Aviv University Law School and listening to a guest lecture by Ariel Sharon in which he disclosed Israeli security cooperation with neighboring Arab states during the early 1960s. At the time, Gamal Abdel Nasser’s Egypt had undertaken a major military intervention into Yemen’s civil war, and Israel found itself in a coalition of states, including Saudi Arabia and Jordan, opposed to Egyptian expansionism in the Arabian Peninsula.

The United Kingdom, the traditional protector of Middle Eastern borders, was no longer in a position to step in. In the 1920s British biplanes had defended the Hashemite monarchies of Transjordan and Iraq from invasion by fanatical Wahhabi warriors. But those days were long gone, and the USSR had since the 1950s been asserting itself as the ultimate power broker in the region. Indeed, the Egyptian air force was using Soviet aircraft to bomb Saudi border towns.

Ultimately, what brought the Egyptian military effort to a crashing halt was Israeli action elsewhere in the Middle East: the June 1967 Six-Day War. Nasser began withdrawing troops from Yemen in August to make up for his losses in the war with Israel, and then signaled his commitment to ending Egypt’s role in the conflict. For the Saudis it was an important lesson: the Jewish state alone had both the might and the will to fight against what was at the time one of the foremost military powers in the Middle East.

The king of Jordan also learned something about his Israeli neighbor in this period. When the Hashemite kingdom faced an armed invasion from Syrian tanks in 1970, Israel understood that it was in its interest to safeguard its neighbor’s territorial integrity. As far as I am concerned that is still in Israel’s interest today, when Iran seeks to destabilize Jordan and undermine its sovereignty.

And this brings us to the UAE, which, until 1971, was still a British protectorate. London’s lack of interest in defending the status quo during the war with Yemen was a sign of things to come. In 1968, the UK announced it would withdraw from all its positions “east of Suez” by 1972. The UAE thus gained independence at a time when it was clear that the former colonial powers would no longer provide security; the new state had to protect itself.

The Emirates of course had unresolved security problems of their own. Already in the 1950s they were drawn into border conflicts with Saudi Arabia at the Buraimi Oasis. What accelerated these territorial clashes was the discovery of crude oil all along the eastern coastline of Arabia, which was claimed by competing international oil companies representing different national interests. The British were operating in Abu Dhabi through a subsidiary of the Anglo-Persian Oil Company, while the Americans laid claims through the Saudi Arabia-based ARAMCO. At the time, Britain was willing to protect the UAE’s territorial integrity (and thus, its own oil interests), but by the 1970s it was clear that it could no longer be relied upon to do so.

Although the conflict over the oasis simmered on until 1974, by the 1960s it was clear to Abu Dhabi that it was not Saudi Arabia it had to worry about. With the overthrow of the shah in 1979, and the rise of revolutionary Iran, the Islamic Republic became the greatest threat to both the Saudis and the Emiratis. The Iranian regime aspired to recover the lands its predecessors once controlled during the era of the Safavid empire. Today, Turkey under President Erdogan also looks to restore the areas once ruled by the Ottomans centuries ago.

Israel was strong, and it respected the borders of other states in the Middle East. If it moved into its neighbors’ territory, it was to defend itself against armed attacks. Its adversaries were the same hegemons that posed a threat to the Emirates, and that sought to take over parts of the Middle East or North Africa. And Israel shared the Gulf states’ concerns.

Another instructive example is Chad. During an official visit to this Muslim-majority African nation, high-level officials explained to me that they severed diplomatic relations with Israel in 1972 due to threats from the Libyan dictator, Muammar Qaddafi. And why did Chad renew ties with Israel in 2019? Because Qaddafi had been overthrown.

In short, Israel has been making common cause with the victims of regional aggression. This was a new role, based on recognition that states in the region are ultimately motivated by a keen understanding of their own security interests.

If there is a new diplomatic doctrine at work here it comes from a realistic understanding that the Jewish state can reach peace with its neighbors if it can address their most vital concerns. Israel is not the regional policeman, nor should it attempt to take on such a role. But it must make its contribution to upholding the regional order along with its Arab allies.

When, in 2015, Prime Minister Netanyahu addressed a joint session of the U.S. Congress in order to highlight the dangers of the Iran deal, he was speaking for generations of Jews who fought off genocidal threats in the past. But he also stood in Congress representing all the peoples of the Middle East. He was part of a new regional order.

Undoubtedly our new Arab allies took notice of who was now willing to stand by their side.

The Meaning of Israel's Peace Accord with the United Arab Emirates: A Symposium
3. Symposium

What Happens Next with the Israeli-Emirati Accords?
8. Symposium