This is a response to The Meaning of Israel's Peace Accord with the United Arab Emirates: A Symposium, originally published in Mosaic in August 2020 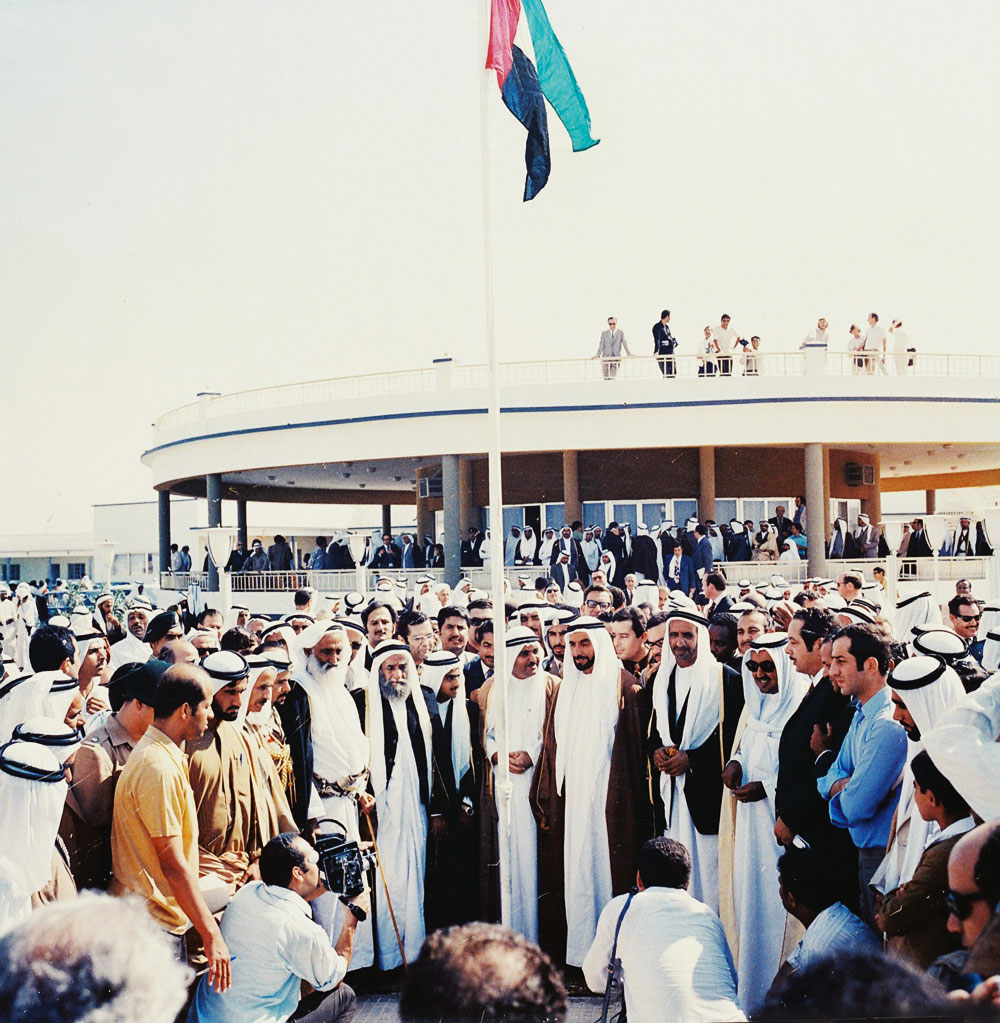 The first hoisting of the flag of the United Arab Emirates at the Union House in Dubai on December 2, 1971. Wikipedia.

Why am I, a British Muslim, writing these words for an influential American Jewish magazine? I am convinced that our destinies are interwoven with ideas that, as of last week, gave birth to the new peace between Israel and the United Arab Emirates. The UAE-Israel peace treaty is not simply about geopolitics, security and economics, Iran, or COVID-19. This moment represents something much larger and deeper: it is a blueprint for what is yet to come with the other moderate Sunni Arab nations, and beyond. We are in the midst of an existential shift in the global Muslim mind.

Almost all Muslims, 1.8 billion people, of whom 85 percent are Sunni and roughly 10 percent are Shiite, are expected to be “pro-Palestine” and anti-Israel—and by extension, suspicious of encounters with Jews. For a long time, to question this anti-Semitic binary was to be an outcast, to risk public condemnation and then isolation from the mafia-like organizations that control the Muslim street: Hamas, the Muslim Brotherhood, Hizballah, Islamic State, and their many routes of influence from websites to university campuses to satellite-television channels. As a result, many Muslim activists embraced the binary without question. But in the last few years, the Emirati leadership slowly started to dismantle it, by, for instance, sponsoring and publicizing interactions between rabbis and imams, and by speaking openly about the common Abrahamic heritage of Jews and Muslims, as well as Christians. From these first steps came last week’s long stride toward a new, peaceful order in the Middle East.

In this endeavor, the Emiratis were being the faithful children of the founding father of their nation: Sheikh Zayed bin Sultan al-Nahyān (1918-2004). Unless we understand this man and his model, and understand by extension the inner dynamics and the culture of the people and the tribes of the Arabian Gulf, we in the West and Israel cannot comprehend how this peace came about and what it portends.

The Emiratis come with a proud history, strong families, old tribes, firm belief in one God, loyalty to friends, and hospitality for guests: values that inform their modernization programs and the ambitions of their political leadership. Sheikh Zayed, the embodiment of that wisdom and moderation, was known as Hakim al-Arab among fellow leaders, “the wise one of the Arabs.” He was the father of the current, peace-making Crown Prince Sheikh Mohamed bin Zayed, known widely as MbZ.

The moral courage of MbZ to make peace with Israel comes directly from the way Sheikh Zayed raised his family and the culture he fostered among the citizens of his country. There are a few stories from Sheikh Zayed’s life popular among Emirati elders that show this. Here is one. When Sheikh Zayed was visiting Switzerland, a Jewish trader in a culturally mixed area recognized him window-shopping for gifts outside his shop. The merchant closed his business, came out, took a member of the Sheikh’s entourage aside, and said “There are many Arabs here and the emir will cause controversy for him if he enters my shop. They boycott Jewish places so to avoid embarrassment and controversy, please take the sheikh to their stores.”

Sheikh Zayed noticed the Jewish man speak and then leave. He ascertained what was said, visited the Arab stores, and then went to his hotel. The following day, he returned. The Jewish man’s store was open. The sheikh entered. “I thank you for your concern, but we are brothers. Our father was Abraham,” he said. Sheikh Zayed then made several purchases from the shop and told the story of Abraham’s two sons, Isaac and Ishmael. “Arabs are the children of Ishmael. Can brothers live in peace?” he asked, and then told the story about the prophet Mohammad, who, upon seeing a funeral cortege pass, stood up in respect.

“Messenger of God, that is a Jewish person’s funeral,” his companions protested.

“Is this not a human soul?” the prophet replied.

In sum, Sheikh Zayed and his sons have long upheld the culture of compassion taught by early Islam. But, happy as that is, it is still a far cry from a concrete peace deal. There have been other factors and dynamics at play in bringing the Israelis and the United Arab Emirates into alignment. They too require understanding and protection.

First, there is a reason why the treaty is named the Abraham Accord. MbZ seeks to connect his people to a God who is one, compassionate, reasonable, just, and merciful. And this one God is the common denominator between Jews and Muslims and Christians. In almost every public utterance of MbZ’s this theme finds expression. He warmly welcomed Pope Francis to the UAE in 2019 to hold an open-air mass, a historic first in the Arabian Peninsula. The creation of a vibrant Jewish community in the Emirates, again a first, is another part of this Abrahamic conviction. All this comes together in the newly built Abrahamic Family House in Abu Dhabi, the capital of the Emirates. There, a mosque, church, and synagogue are located inside a single shared compound.

The message sent by these actions and symbols is that it is time to turn away from fighting the religious wars of the past. For enlightened Muslims, Jews are not our enemy. We are brothers.

The second of these dynamics is more political. The UAE is pioneering a pathway for Arabs and Muslims to move away from the dysfunctional but widely popular ideology of the so-called ummah. This ideology conceives of the world’s 1.8 billion Muslims as comprising a single political community, one that waits in anticipation of a single caliph as leader and a single ever-expanding empire that will rule Israel, India, the West, and China, in particular reclaiming lands that Muslims once ruled in Spain (Andalusia), Italy (Sicily), and elsewhere. This ideology of Islamism—one nation, one leader, one land—recalls imperial aspects of the European fascism from the 1930s. It is dangerous ultimately destructive, and it leads to pathological forms of repression like Islamic State.

The victory of Hamas, the Muslim Brotherhood, and other Islamists in elections across the region is evidence of the potency of this trend. Iran and its proxies are likewise working to ensure Persian influence at the heart of a future Islamic empire. And the West in its clumsiness is happy to facilitate them. The blunder that is made and repeated by diplomats, civil servants, and NGO activists from Washington, London, and Brussels is to demand unrealistic democratic reform. In so doing, Western activists are motivated by their own kind of imperial instinct to politically homogenize the region in their own image. Far from helping the nations of the Middle East to achieve actual democracy, the activists have turned the idea of democracy into a stick with which to beat our closest and most natural allies in the region.

The UAE-Israel peace accords are, among other things, a shock treatment to both universalist, imperial states of mind—the hard Islamist one and the gentler, blundering one.

How so, exactly? The antidote to dysfunctional globalism is to be found in honoring national borders and reinforcing national sovereignty. The United Arab Emirates, along with its friends in Egypt, Saudi Arabia, Jordan, Bahrain, Morocco, and elsewhere are focused now on expressing this modern identity, not on the imagined glories of long-past religious empires—even if, to political Islamists, this is idolatry.

Such is the background to making peace with Israel, the world’s oldest surviving people and antiquity’s first nation-state. Israel is meant as a prototype. It was Moses who guided the Jews toward Jerusalem to live in liberty, to coexist under the law, and to love the land of ancient Israel. Saxon kings of England, the Dutch, Montesquieu in France, the American Founding Fathers, all took inspiration from this and attempted to rebuild Jerusalem, a new Israel in their own lands. (Hence the way William Blake’s famous lines “Till we have built Jerusalem/ in England’s green and pleasant land” have echoed through the ages.) The same ancient love for the land and its laws is now being offered up by MbZ and his friends as a model for the future of the Arab and Muslim world.

In defense of the UAE’s peace deal with Israel, Saudi and Egyptian journalists constantly reinforced this message of healthy nationalism: it is a sovereign decision by a sovereign nation-state. The stirring national anthem of the Emirates, sung daily by every school child, includes the lines “long live my nation, my country, which I serve sincerely. Long live the flag, we sacrifice our souls for our country.” Standard stuff to Westerners, maybe, but not so much in the context of the ummah.

It is also under this ethos of strengthening nation-states and identity that the UAE has bought more time for the Palestinians to negotiate a two-state solution. Hamas or Hizballah cannot win anything for ordinary Palestinians. The Emirati diplomacy of direct conversations with the Israelis, far from closing off the idea of a Palestinian state, has provided the Palestinians with their last hope for one.

In historical terms, the states of the Middle East are new and still not fully formed, requiring of their leaders and citizens hard work, clear vision, and entrepreneurial skills. The Emirates is one of the youngest of these states, founded only in 1971, which gives it a surprising advantage: its youth and distance from 1948, 1967, and the other Arab-Israeli wars of the past gives it a freer mind to lead the way.

In its wake, we will see other Muslim-majority nations stand with Israel soon. King Hamad of Bahrain was an early inspiration for peace, with his Hanukkah party for American Jews in 2016. The late great Sultan Qaboos of Oman invited the Israeli prime minister to Oman in 2018. That the future king of Saudi Arabia, Sheikh Mohammad bin Salman, will journey to Jerusalem and make peace with the Jewish people is no longer a dream but a probability. And there are other nations still that may surprise us. Who knows, in the years ahead, Syria and Lebanon might join them; the sectarianism that has torn those nations apart is resolved not by depending on Iran but by turning them back to their natural home: their Arab allies.

Much of this depends on how we in the West behave. Do we act like campus activists or the well-intentioned but uncomprehending diplomats who stomp around helping the region tear itself apart, or do we support our natural friends and assist them toward a different Middle East made of robust nation-states unafraid to engage with each other? The choice is of course no choice at all. But will we make it?