What Happens Next with the Israeli-Emirati Accords?

It forestalls annexation and deals a blow to the longstanding Palestinian veto on Israel’s relationship with other countries. It promises even more, but that depends on hard work. 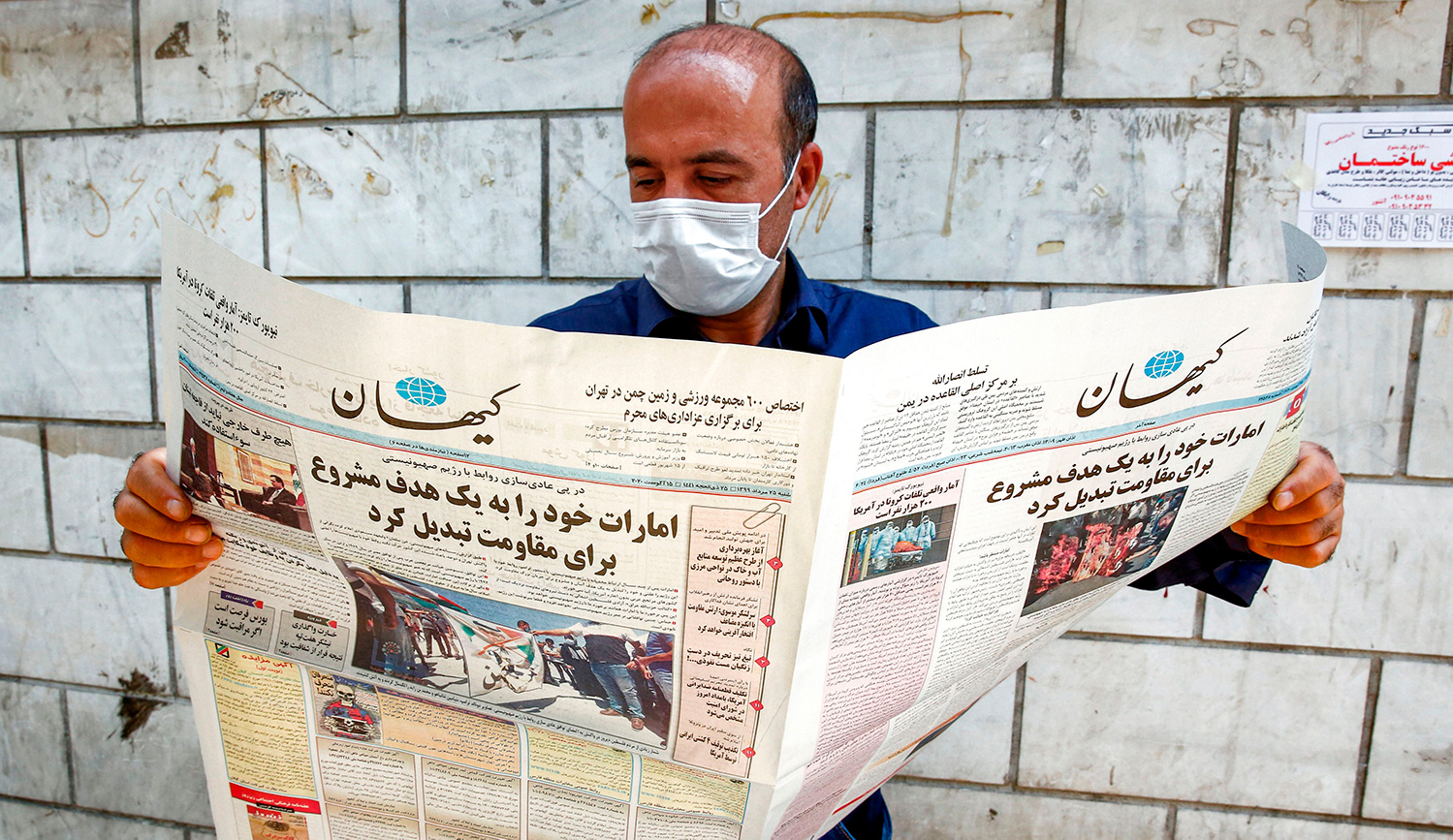 A man in Tehran looking at a Farsi newspaper with a headline declaring “The UAE has become a legitimate and easy target.” AFP via Getty Images.

Symposium
Amos Yadlin
About the author


Amos Yadlin served as Israel’s chief of defense intelligence and then, from 2011-2021, as executive director of the Institute for National Security Studies (INSS) in Tel Aviv.

This year’s “October surprise” may have arrived several months early, in the form of last week’s historic demonstration that the Middle East contains not only threats but also opportunities. Peace has returned to the agenda through a U.S.-brokered Israeli-Emirati agreement that kills two birds with one stone. Besides dealing a major blow to the longstanding Palestinian veto on Israel’s relationship with other countries in the region, the agreement has delayed annexation of parts of the West Bank, which would have imposed considerable costs on Israel and imperiled its future as a secure, Jewish, and democratic state.

Unlike previous peace agreements Israel has struck with Arab states, this one may lead to a true warming of relations. Egypt and Jordan have maintained peace with Israel for decades, including very close cooperation in the security realm, but much of that remains low-profile, behind closed doors, and limited to security alone. In contrast to those instances of “cold peace,” the Emirates already appears interested in taking more public and long-term steps to bring the two countries closer together, including the recently publicized agreement to embark on joint research and development for a coronavirus vaccine and the expressed desire to promote “closer people-to-people relations.”

The timing of this step was hardly coincidental, and was the result of a convergence of interests between the three involved parties, all of whom have their eyes on the upcoming U.S. elections in November. First, the White House’s self-described “deal-maker” needed a diplomatic achievement to present to voters, as his foreign-policy gambits vis-à-vis China, North Korea, Iran, and the Israel-Palestinian conflict have so far failed to yield concrete results. Second, Prime Minister Netanyahu had promised his right-wing base annexation of parts of the West Bank, but was aware that such steps could place Israel’s national security at risk, bury President Trump’s peace plan, and become a major point of contention with Washington should Joe Biden win the upcoming election—and thus sought an off-ramp.

Third, the UAE has much to gain, not least by being able to take credit for halting annexation. It also believes that a peace deal with Israel can solidify its standing in Washington and help to deflect criticism regarding a variety of activities which future administrations might find problematic: its involvement in the war in Yemen, its close ties with China, and its outreach to Iran to reduce tensions in the Gulf. In addition, the Emirates may be taking such steps to protect itself better from regional threats in the event of Washington’s continued retrenchment from the Middle East—by enabling itself to buy more advanced weaponry from the U.S. and seeking closer security cooperation with Israel, a leading regional military power.

Looking ahead, Israel can now focus its efforts on the more pressing national-security challenges it faces. At the top of Jerusalem’s agenda is preventing Iran from producing nuclear weapons. President Trump’s “maximum-pressure” campaign has succeeded in building up economic leverage against Tehran, but the Iranian nuclear program continues to creep toward the threshold. Second on the list is coping with the Islamic Republic’s efforts to build up stockpiles of advanced weaponry along Israel’s northern front. Israeli airstrikes—what the IDF calls the “campaign between wars”—are a partial solution, but maintain a continued risk of unwanted escalation and may not be able to stop the advancement of this project indefinitely.

The third priority is the risk posed by Iran’s Lebanese proxy Hizballah, which has stockpiled over 100,000 rockets and missiles and gained extensive combat experience in Syria and Yemen. Lastly, there is the concern that another round of fighting will erupt with Hamas in Gaza. Based on the hostile responses to the Israel-UAE agreement from Iran, Hizballah, and Hamas, it seems safe to assume that those adversaries see the consolidation of this anti-Iranian and anti-Islamist bloc as a threat to their sinister designs for the region.

Without putting a damper on the celebratory mood, it is still worth recalling that the task of translating the groundbreaking announcement into practical cooperation in a wide variety of fields remains ahead of us. Because the devil is in the details, the existence and continued nurturing of mutual trust between the countries will be critical for the success of this process. Much will depend on the interpersonal dynamic that develops between Prime Minister Netanyahu and Crown Prince Mohamed bin Zayed.

One foreseeable complication stems from the differing assessments of the agreement’s implications for annexation: according to Trump it is now “off the table” while Netanyahu asserts it is “just a delay.” The question of whether annexation is on hold for months, years, a decade, or more, could become a point of contention between the parties. Although Netanyahu may not have any qualms about breaking coalition agreements with Israel’s Blue and White Party, he could find that going back on his word to the U.S. is quite a bit more complicated and has the potential to derail progress in Israeli-Emirati relations.

As mentioned, one of the UAE’s motivations for this agreement is its desire to obtain more sophisticated weaponry from the U.S. Until this point, its acquisitions have faced a glass ceiling imposed by the American commitment to maintaining Israel’s qualitative military edge over the Arab states. Now that a path to normalization is being charted between Abu Dhabi and Jerusalem, presumably Washington will allow for this edge to be narrowed and may consider selling the Emiratis more sophisticated military technologies. Based on the UAE’s geographic distance from Israel, its history as a responsible actor contributing to regional stability, the fact that it has never fought against Israel in the past, and its need to defend itself from Iran, it would be reasonable for Washington to sell it advanced weapons systems. Nevertheless, it is critical for Israel’s ministers of defense and foreign affairs to take an active role in coordinating with their U.S. counterparts on the question of what systems should be made available in order to promote the UAE’s stability and self-defense.

There is now a great deal of hope in Jerusalem and Washington that the Emiratis have “broken the ice” and other Gulf states will follow their lead. Among those frequently mentioned as the next candidates for normalization with Israel are Bahrain, Oman, Sudan, and Morocco—countries with which Israel has maintained quiet cooperation for many years. Whether these states or others decide to move forward and formalize relations with Israel will depend on three key parameters: 1) the Arab and Muslim world’s reaction to the UAE’s steps, 2) their national-security challenges and the degree to which they believe that shoring up relations with either the U.S. or Israel can help them to cope, and 3) their ability to create a pretense to claim that normalization serves the Palestinian cause.

For the time being, Riyadh has remained silent, though it almost certainly acquiesced to the Israel-UAE deal in advance and is carefully examining the reactions when considering the possibility of “going public” with its own sub rosa cooperation with Jerusalem. Even more so than the Emirates, the kingdom is keenly aware that it has a public-relations problem in Washington (and America more generally) that is likely to grow more severe if Biden should emerge victorious in November. The Saudis, however, face several constraints on openness to Israel: competition for leadership of the Muslims world (and the desire not to give ammunition to such rivals as Turkey or Iran), their monarch’s role as “custodian of the two holy sites” (Mecca and Medina), their commitment to the 2002 Arab Peace Initiative, and the sentiments of an older generation more sympathetic to the Palestinian cause than their younger compatriots.

As for the future of Israel-Palestinian peace, the “Abraham Accords”—as the new agreement is being called—upend the longstanding demand, made explicit in the Arab Peace Initiative, that “first Israel should make peace with the Palestinians, and then Israel will enjoy normalization with the Arab world.” That has not proved itself to be a productive formula, as is evident from the fact that after nearly two decades it has yet to yield an agreement between Israel and the Palestinians. If anything, the Israel-UAE agreement highlights the fact that some Middle Eastern states, despite popular sympathy for the Palestinians, are tired of having their agendas hijacked by Palestinian rejectionism; the recent peace deal constitutes a major blow to Palestinian veto power over Israel’s relationship with the Arab world.

That said, the expectation among Arab states for some progress on the Israeli-Palestinian track remains. In keeping with the Emirates’ laudable track record as a responsible actor promoting regional stability, its latest steps have put annexation on hold and kept the Trump administration’s Israel-Palestinian peace plan from becoming a cover for unilateral action. The Palestinians now have an opportunity to return to the negotiating table without any preconditions—and it would be yet another wasted opportunity if they fail to do so.

Ze'ev Maghen
Peace & the UAE
The Emerging Order of the Middle East
7. Symposium

What Happens Next with the Israeli-Emirati Accords?
1. SYMPOSIUM

The New Agreement Breaks the Anti-Semitism at the Core of the Middle East’s Dysfunction
8. Symposium