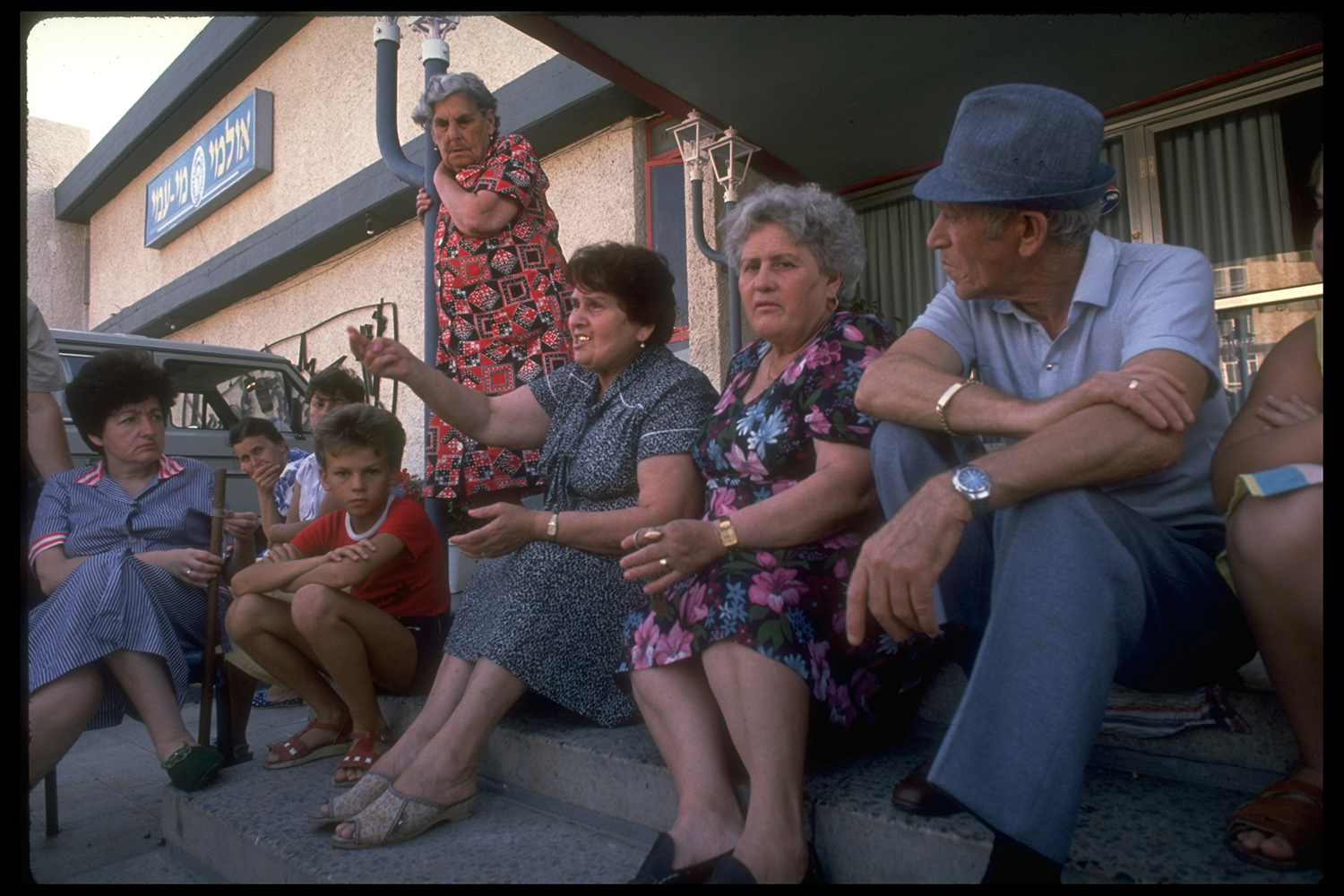 The final line—“Israel can no longer be understood without its Russian component, and Israel’s ‘Russians’ can only be understood as a type of Israeli”—of Matti Friedman’s fascinating essay about Israel’s Russian immigrants and their children captures how much they changed Israel, and how much they didn’t. An impressive storyteller, Friedman examines “popular culture as a window into the broader spirit of what’s happened.” But there’s an important ideological tale to tell too, one that he touches on lightly but that deserves full exploration. As Israeli society experienced one Russian revolution after another in the 1990s, one of the nation’s core, founding myths was transformed—even, it’s not too strong to say, rejected.

Since before the founding of the state in 1948, Zionists thought that their movement required bringing in Jews from around the world and putting them through what David Ben-Gurion called “a wholesale revolution in a Jew’s image and his way of life.” Hoping to banish 2,000 years of powerlessness, Ben-Gurion imagined that “With their arrival in their homeland, this human dust (avak adam) living among strangers, dependent on vagrancy and serfdom, coalesces into an independent, national brigade, attached to and rooted in its great history.” He and his peers believed that this Zionist melting pot would save and strengthen the newcomers, not demean them. National redemption would result when each immigrant exorcised the broken, exiled Jew from within and became a proud pioneer.

It was an idea inspired by the 19th-century Russian socialists, who sought to create a “new man.” The Eastern European Socialist Zionists of the Second and Third Aliyah took this idea and made it their own, dreaming of a New Jew freed from the debilitating effects of anti-Semitism and assimilation. And these pioneering Zionists did create an impressive infrastructure of centralized institutions and communal frameworks, like the kibbutz, to forge and serve these New Jews; their centralized, heavily bureaucratic, economic, social, and cultural controls probably offered the fastest route to building the Jewish state as quickly as they did, considering the trying conditions they faced.

But despite all the good accomplished, such early-state paternalism imposed a high price on every citizen, especially immigrants. The heavy-handedness turned particularly abusive and absurd when welcoming the Mizraḥim, the 850,000 Jews from Muslim and Arab countries who arrived mostly in the wake of the founding. The picture was not pretty: the secularized Ashkenazi Jews from the Second and Third Aliyah who dominated the country’s leadership told traditional Jews from Yemen, Morocco, Tunisia, and elsewhere where to live, what work to do, what kind of Judaism to observe, even what kinds of names they could and could not have. To these newcomers, Israel’s melting pot felt more like a cultural strip-mining operation.

It had predictable effects. In the 1970s, the Black Panthers, an Israeli group inspired by the black American radicals of the same name, sparked the inevitable backlash against the feelings of humiliation and disenfranchisement the process imposed. By 1986, street protests had turned into a more effective—and lasting—response. The Shas party, the first major party devoted to organizing the Mizraḥim, rejected the Israeli integrationist’s cultural imperialism and sought political power while denouncing the destructive influence of the Israeli “WASPs” (“White Ashkenazi Sabras with Protektsia,” that is, pull).

The backlash unnerved the “Mayflower Israelis,” and, when the Russians arrived a few short years later, they welcomed them eagerly as demographic backup. As Friedman notes, in 1989, the Ashkenazi journalist Amnon Dankner celebrated the “demographic earthquake” bringing “Yasha, Vasily, Natalya, and Jenia” as weapons in the existential cultural struggle of “Mizraḥim vs. Ashkenazim.” Here were the necessary reinforcements: Jews from the old country, who like them, “love to study and learn, to frequent theater and concerts.” The old-timers, in other words, assumed their landslayt would embrace Zionism’s unifying yet uniform vision. After all, these Russian Jews literally spoke the same language and were the descendants of the Socialist Zionists who founded Israel.

But too much had happened in the decades-long interim. The new Russian-Israelis were on the other side of the great Communist divide. If before the Bolshevik Revolution the Socialist quest for a New Man seemed attractive in theory, the actual Communist attempts to put the dream into practice made it seem nightmarish. Stalin’s official slogan vowed to turn a whole generation into mass-produced cogs serving the Communist machine. Brutalized by that delusion, the new Russian olim arrived in Israel recoiling from anything that reeked of “New Jews” and the Socialist institutions that produced them, from the romantic kibbutzim to Israel’s far less charming state-owned monopolies and monolithic labor unions.

As an overwhelmed Israel tried absorbing them in the traditional way, these new immigrants clearly needed programs tailored to their specific linguistic and cultural needs. In addition to the new Russian-language theatre, which Friedman mentions, a cutting-edge math and physics program, summer camps for Russian-speakers, an independent Russian-language library, an official Russian radio station, and, even a Russian TV channel sprang up. Each institution marked another blow against the official Zionist melting pot; each emerged only by overcoming initial Israeli establishment resistance.

We can speak to this first-hand. In 1988, one of us—Sharansky—and some other former Soviet Jewish activists created a new organization, the Soviet Jewish Zionist Forum, to champion these and other initiatives. As time passed, we started to realize that to integrate one million immigrants effectively, representatives of these newcomers must sit at the tables where decisions about their future were made. That was the genesis of Yisrael b’Aliyah, the new Russian immigrants’ party.

We had intense, drawn-out debates about the Zionist legitimacy of such a party. None of us wanted to unleash an East European analog to Shas, guardians of the new ghetto of Russian olim protecting our way of life from Israeli society’s negative influence; in fact, we wanted to join society as quickly as possible. And none of us wanted to ruin the Zionist dream of kibbutz galuyot, of Jews from all over the world mixing together as one free nation in our homeland. We just didn’t want to accept the usual Israeli assumption that the first generation of newcomers “wanders in the desert,” suffering while sacrificing and waiting for the next generation to integrate and thrive.

Ultimately, Theodor Herzl himself gave us the permission we sought. Reading a Russian-language translation of his manifesto The Jewish State, found in the Jewish Agency’s Sifriyat Aliyah—Aliyah Library—we discovered these thrilling words: “We will give a home to our people, not by dragging them ruthlessly out of their sustaining soil, but rather by transplanting them carefully to better ground. Just as we wish to create new political and economic relations, so we shall preserve as sacred all of the past that is dear to our people’s hearts.”

Herzl wanted to import the best of the old world into the old-new land. “There are English hotels in Egypt and on the mountain-crest in Switzerland, Viennese cafés in South Africa, French theaters in Russia, German operas in America, and the best Bavarian beer in Paris,” he wrote. “When we journey out of Egypt again we shall not leave the fleshpots behind.”

As a proud Jewish nationalist who loved European culture, Herzl respected the deep connections that immigrants brought from their first homes to their old-new homeland. He wanted to welcome Jews from all over, wanted to welcome their individual characters and skills, not abandon them. Then, they would evolve together, and transform into a new whole. The resulting “Mosaic mosaic,” a Jewish patchwork, would be fused together by the tradition of Moses while dazzling everyone with its worldly diversity.

With the 1996 elections, olim through the new Russian party started becoming full partners in building Israel’s new mosaic too. It brought hundreds of new immigrants to serve in the cabinet, the Knesset, and dozens of municipalities. Within just two years, we were helping to decide our future, not just having our future decided for us. This conceptual shift—from Ben-Gurion’s melting pot back to Herzl’s mosaic—saved the Russian olim of the 1990s from being yet another lost generation of immigrants wandering the new Israeli desert.

It is this shift that has allowed Friedman’s Generation 1.5 to emerge in all its quirky, “two homelands” glory. Back in Russia, many Russian Jews were instinctively Ben-Gurionites. Fleeing from slavery, they naturally hoped to fit into a new, free, Israeli life. Only after arriving in Israel, when Russian remained your mother tongue no matter how thrilled you were to be there, did many realize that identity is not a matter of either-or, not an old battery you can discard with a fresh one.

All this explains why Israeli society is now mature enough to tolerate Novy God, the one holiday during the long Soviet nightmare that celebrated family without requiring any worship of the Communist party. In the 1980s, most Israelis condemned the Russian newcomers for celebrating this “missionizing” holiday with its Yeshu—Jesus—tree. Today, while it may not be as natural a fit for Israeli culture as the Moroccans’ post-Passover holiday of Mimouna, it’s respectable enough to add another day to the political calendar. Just as politicians get sugar highs every year eating as many mouffletas (a crepe-like dish) as they can on Mimouna to bond with their Israeli-Moroccan constituents, many pols now gorge on the Novy God delicacy of “herring in a fur coat” to flatter Russian-Israelis.

When the Soviet immigration was at its peak, a taxi driver told one of us, “I’m so happy to see how you Russians are coming in big numbers to Israel. Together, you Russians and we Sephardim will show those Ashkenazi Jews who’s the boss now.” Although that’s not exactly what happened, the cabbie’s vision has been fulfilled much more fully than Dankner’s dream of WASP reinforcements. As Matti Friedman elegantly shows, when the Russians came, they forged a new model for Israeli integration, becoming Israeli without melting their Russianness away.

Portions of this article are based on Never Alone: Prison, Politics, and My People, by Natan Sharansky and Gil Troy.