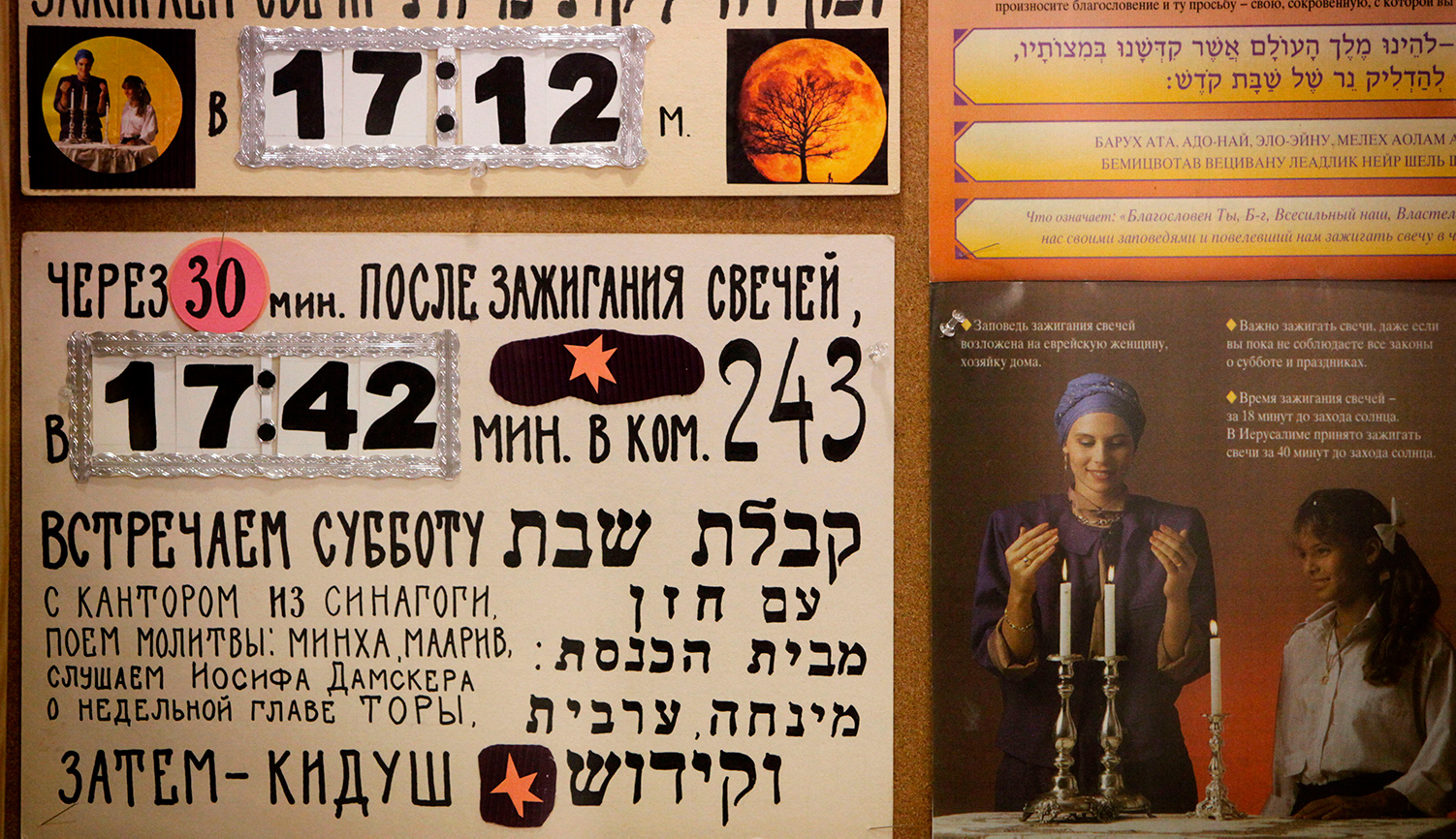 An announcements wall at the Diplomat Hotel in Jerusalem, an absorption center that’s home to 600 immigrants from the former Soviet Union, on March 13, 2012. Miriam Alster/FLASH90.

It seems to me that the single event that brought the most good to Israel since its founding was the Russian wave of the 1990s. There are other competitors for that title, like victory in the Six-Day War and the reunification of Jerusalem in June 1967—but along with that military triumph came negative consequences that have damaged Israel’s internal cohesion and continue to pose moral dilemmas. If victory in the Six-Day War was a mixed blessing, the Russian aliyah was just a blessing. The million people who came here after the Soviet breakup have changed Israel for the better, and their absorption in the space of 30 years is a striking success for the immigrants and for the state.

Like many Israelis, I’ve never had much patience for the state holiday marking the 1967 victory, Jerusalem Day, which encourages the glorification of territory. The state isn’t the sum of its conquests, but of its citizens. I’d rather have a Zionist holiday celebrating the ingathering of the exiles, which would require the consumption of Moroccan mufleta, Kurdish kubbeh, and the Russian selyodka pod shuboy, “herring in a fur coat,” all of which are now Israeli food. I’d celebrate it every year on the date of the holiday that I discuss in my essay, the one that Russians have imported—controversially—into the Jewish state: Novy God, December 31.

I was pleased to find, upon publication of my essay “Israel’s Russian Wave, Thirty Years Later,” that I am not alone in my esteem for this human movement. It was a great honor to have a response written by Natan Sharansky, who became the face of the exodus when he was jailed for his principled Zionism and succeeded in reaching Israel after years in the gulag, just before the immigration wave began in earnest. His response, coauthored with Gil Troy, looked at the way that the Russian immigration differed from those that came before—the way these newcomers succeeded in setting the terms of their own absorption and declaring, as the title of the essay has it, the “end of the new Jew.”

The older “new Jew” ideal once posited that immigrants to Israel were “human dust” who were probably irredeemable but whose children might be sabras free of Diaspora baggage. Ironically, as Sharansky and Troy point out, this idea (like many Zionist ideas) is itself a Russian one—it hails from the thinking of the socialists of the tsarist era in the 1800s. But the new arrivals from the Soviet Union in Israel were heirs to a proud culture and weren’t interested in discarding it to become someone else’s idea of a new Jew. “We just didn’t want to accept the usual Israeli assumption,” the authors write, “that the first generation of newcomers ‘wanders in the desert,’ suffering while sacrificing and waiting for the next generation to integrate and thrive.” The immigrants were determined to succeed in the first generation—and, to a remarkable degree, they did.

In their response, Sharansky and Troy make the interesting point that in rejecting this idea of the melting pot, the Russians were drawing on a different but equally venerable Zionist tradition, one rooted in the West European thought of Theodor Herzl. “There are English hotels in Egypt and on the mountain-crest in Switzerland, Viennese cafés in South Africa, French theaters in Russia, German operas in America, and the best Bavarian beer in Paris,” Herzl wrote, envisioning the Jewish state five decades before it actually existed. “When we journey out of Egypt again we shall not leave the fleshpots behind.” Soviet life in places like Volgograd or Novosibirsk can’t quite be described with the word “fleshpots,” but you get what Herzl meant, and so did some of the leaders of the Russian aliyah.

In Yossi Klein Halevi’s response I was thrilled to find a description of what the early years of the Russian wave looked like to one of Israel’s best journalists as he covered it firsthand. The aliyah may have been a success when one takes the long view, but it didn’t look that way to many of the people involved at the time. Klein Halevi introduces us to “a couple struggling to stay together as the husband became increasingly religious and his half-Jewish wife increasingly bewildered; the editor of a new Russian-language Israeli newspaper who had sat in the gulag for Zionist activity but who felt himself an outsider to the Jewish story; a celebrated organist in the northern town of Carmiel who divided his time touring Europe and working as an Israeli garbageman.”

He points out that the immigrants arrived in an Israel that was “stuck” amid the malaise of the first Palestinian intifada, political deadlock, and economic decline, and provided a shot of hard-nosed professionalism that helped lift the country from the doldrums and propel it into decades of growth. (We still have political deadlock, but that can’t be blamed on the immigrants.) With his eye for the sweep of Jewish history, Klein Halevi makes the fascinating point that the condition of exile, in which Jews are forcibly separated from the Land of Israel, didn’t end in 1948, with the founding of the state, but with the Russian exodus 30 years ago. Since then, with few exceptions, Jews outside Israel have been outside Israel by choice. That’s another argument for the landmark status of the great aliyah, and a reason to inscribe it in bigger letters on the Jewish calendar.

In Rabbi David Brofsky’s penetrating response, readers are given a fuller portrait of the way that Israel has let down its citizens who came from the Soviet Union. Welcomed by the Law of Return, and then discriminated against because of their inability to demonstrate their Jewish religious identity as defined by stringent interpretations of Jewish law, some 400,000 Israelis suffer the unintended consequences of the messy relationship between religion and politics in Israel. Many of them came to Israel, Brofsky points out, to escape anti-Jewish persecution, and yet, in several ways they’re treated as outsiders in the Jewish state. “This aspect of the Russian immigrants’ experience is not sufficiently discussed,” Rabbi Brofsky writes, “their plight receives too little attention in the media, and the broader Israeli public and their representatives are apathetic.”

It’s easy to blame the ultra-Orthodox rabbinate for this state of affairs, but in fact the responsibility lies with the state and the electorate—that is, with us. It’s the government of Israel that entrusts this rabbinic institution with power to determine marriage law, and it’s the state that can change it. It’s not just a Russian problem, and it’s not the responsibility of Russian Israelis alone to change it. But still, demonstrating the political savvy and civic confidence that has characterized this aliyah from the moment it began 30 years ago, a group of Generation 1.5 activists—including Alex Rif, who is profiled in my essay—has launched a new lobby to tackle issues affecting these Israelis, including the problems created by the rabbinate. As in so many battles and challenges faced by the immigrants over the past 30 years, all of us here in Israel have a stake in their success.