We should appreciate Theodor Herzl’s lightning-storm emergence, even if we’ll never really know what caused it. 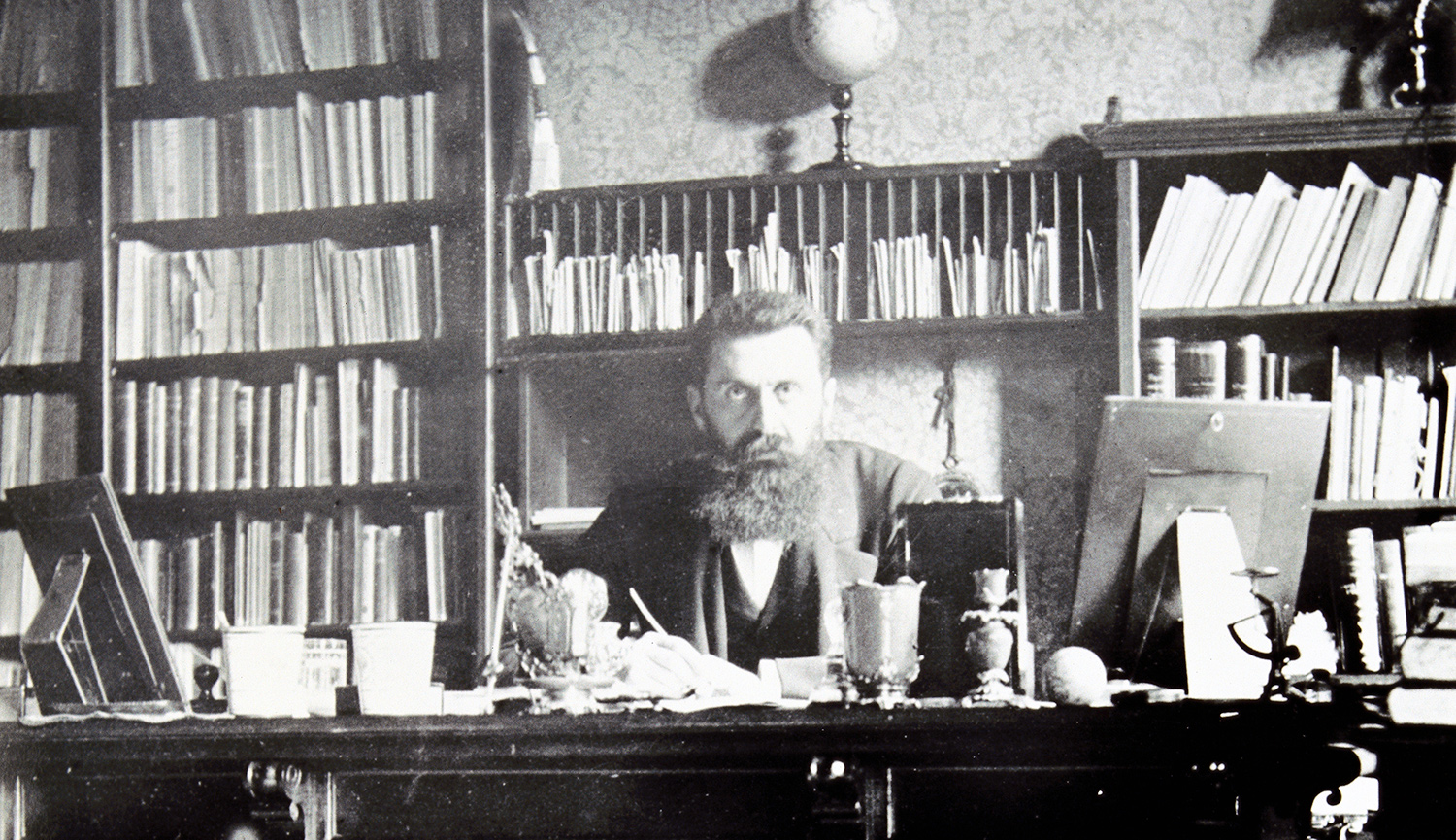 Theodor Herzl at his desk in Vienna around 1900. Imagno/Getty Images.

I am grateful to Mosaic for providing this forum on the seminal figure of modern Jewish history, on the 125th anniversary of the publication of The Jewish State. I appreciate as well the three responses to my essay: Derek Penslar’s psychological speculation, Daniel Polisar’s masterful analysis of why Herzl succeeded where Leon Pinsker failed, and Anita Shapira’s elegant summary of Herzl’s Zionist career. I will address each of them in order.

Derek Penslar suggests that I am wrong to characterize Herzl’s story as a mystery. He proffers a psychogenic explanation of his life and death: that Herzl’s transformation into a Zionist arose from “an episode of mania” in 1895, part of his “life-long struggle with depression.” While Zionism cemented his “fragile persona,” his “desperate search to relieve” his depression “continued to afflict [him] throughout his adult life,” until the “inner turmoil” killed him: “the contradictions between what he was and what he wanted to be . . . brought him to an untimely end.”

The more likely cause of Herzl’s early death, however, was his relentless effort in pursuit of a Jewish state while suffering from a congenital heart condition. In his 1989 review of Ernst Pawel’s Herzl biography, Peter Loewenberg, a UCLA historian, political psychologist, and practicing psychoanalyst, wrote:

During the nine short years in which he built the Zionist movement, Herzl lived with the specter of his impending death. His letters and diaries frequently tell of fainting spells, loss of consciousness, blackouts, arrhythmias, shortness of breath. His self-imposed labor in the service of the Zionist cause acquires a heroic quality. He drove himself beyond any reserves of strength or resilience. Herzl died in 1904 at the age of only forty-four, his body exhausted, his heart worn out.

As a general rule, psychological speculation is of limited value in explaining the emergence of world-historical individuals, as the late Anthony Storr—one of Britain’s foremost psychiatrists—noted in his classic study of Winston Churchill’s depression: Churchill’s Black Dog, Kafka’s Mice, and Other Phenomena of the Human Mind. Storr cautioned that “the possibilities of error in this complicated field are very great,” and that “psychoanalytic insight reveals its [own] inadequacy,” because even if his psychoanalytical analysis of Churchill were correct,

we are still at a loss to explain Churchill’s remarkable courage. . . . In 1940, . . . what England needed was not a shrewd, equable, balanced leader. She needed a prophet, a heroic visionary, a man who could dream dreams of victory when all seemed lost.

For both the Jewish and the British people, a “prophet, a heroic visionary, a man who could dream dreams of victory” emerged at the right time to lead them to their finest hours. It is unlikely that anyone in 1940, other than Churchill, could have rallied the British people, or that in the 1890s anyone but Herzl could have rallied what Leon Pinsker called in 1884 “a half-alive people.”

There were many people in 1894 and 1939 with depression, but only two of them became Herzl and Churchill. Some may see the hand of God in this—Churchill did in his own case—but religious belief is not required to appreciate the mystery, nor to sense the inadequacy of psychological explanations.

Penslar is also unimpressed by Herzl’s diplomatic efforts (“Herzl’s diplomacy with Europe’s great powers accomplished little”). But the convening of six international Zionist Congresses and the obtaining of Russian and British endorsement of Zionist goals in 1903 were key parts of a process that led to the historic Balfour Declaration in 1917. Many Herzl historians and biographers—including Shlomo Avineri, Alex Bein, Steven Beller, Jacques Kornberg, Peter Loewenberg, Ernst Pawel, and Daniel Polisar—have recognized the connection between Herzl’s efforts in Britain and the issuance of the Balfour Declaration the following decade. Prime Minister Benjamin Netanyahu noted it in his 2017 remarks to a special Knesset session honoring Herzl and at an official memorial ceremony later that year.

In his intellectual biography Herzl: Theodor Herzl and the Foundation of the Jewish State, Avineri describes Herzl’s diplomacy in a way that recognizes its key role in leading to the Balfour Declaration and the ultimate creation of the state of Israel:

[Herzl] transformed the idea of a Jewish state from one bandied about by a small coterie of educated but marginal Jews to an item on the international agenda. . . . Through Herzl’s efforts, unsuccessful as they were, Europe’s educated elite, its royal courts, its prime ministers and foreign ministers came to know of the existence of the Zionist movement. Consequently, when the right [international] constellation did eventually appear [in 1917 and 1947], the Zionist movement was able to establish its national home and Jewish state on the ideological, organizational, and diplomatic foundation that Herzl had laid during his nine years at its helm. . . . [H]e harnessed the power of the word to his goals as no other statesman before him had done.

What is most notable about Herzl is not that he failed to reach his goal during his lifetime—so did Moses—but rather how far and how fast he transformed Zionism from a cause discussed by small, isolated groups of Jews to a diplomatic issue considered at the highest levels of every great power. It set the essential stage for 1917 and thereafter as the Ottoman empire dissolved and a new world of Jewish and Arab nationalism prepared to take its place in the Middle East.

Daniel Polisar astutely explains how Pinsker and Herzl both wrote powerfully on the same subject—a Jewish state—but produced dramatically different results. Pinsker had “brilliant insights and heartfelt pleas” but conveyed a skepticism about whether the Jewish people could act on them. In contrast, Herzl projected an optimism that energized his readers. Polisar focuses on the middle chapters of The Jewish State—long passages with detailed descriptions of institutions and procedures, which a century later, with a Jewish state in existence, might be of little interest to modern readers, but which Polisar recognizes were crucial at the time.

Polisar rejects the conventional wisdom that attributes the different outcomes achieved by these two heroes of Zionism to the different decades in which they lived and their different personalities. Instead, through a close reading of their respective works, he identifies as far more important the gap between their modes of expression. “By giving his readers a plethora of details,” Polisar writes, Herzl “gave them license to be inspired by the prospect that a Jewish state could be built.” Although Pinsker’s pamphlet had an unequalled literary quality, Herzl was able to affect his audience far more profoundly. Polisar’s insight adds significantly to our appreciation of Herzl’s achievement.

She is no doubt correct. But the First Zionist Congress was far more than a play or a photo-op.

The formal dress, the carefully designed flag, the invigorating music, the stately hall, the presence of so many people, from so many places, from so far away, the sessions that ran from early morning into the late evening, extending three days, producing an agreed statement of Zionist goals endorsed by Jews from both the East and the West, and—above all—the extraordinary speeches by Herzl and Max Nordau, all combined to lift Zionism into international consciousness. It was, as Polisar has written, the most politically significant meeting of any group of Jews in the last 1,800 years.

One of those who traveled far to attend the Congress, in an age before automobiles and airplanes, was Rosa Sonneschein, a noted editor and writer from Chicago and one of the five American delegates to the Congress. She published her day-by-day account in October 1897, writing that the Congress would never “be forgotten by those who were fortunate to attend” and opened “a page in Jewish history of which their posterity may well be proud.” She also understood that the new media would make a difference: “the words of Dr. Herzl and Max Nordau,” she wrote after the first day, “will flash over the wires and will be heard by the nations.”

And they were. The New York Times published several accounts of the Congress during August. After the Congress ended, a final dispatch appeared in the Sunday September 5, 1897 edition, under the headline: “The Zionists at Basel: A Jewish Movement Which May Bear Political Significance.” It began:

When Mr. Theodor Herzl, the so-called “New Moses,” made his farewell speech, . . . he declared the congress had been worthy of itself and of Israel. Then ensued a dramatic scene—tears, kissing, and rejoicing—beggaring description. . . . [I]t is the opinion of the thoughtful in the political world that this movement will have to be reckoned with in the near future.

It had been only a year-and-a-half since Herzl published The Jewish State.

For the last words in this “Last Word,” I can do no better than to quote from Professor Shapira’s magisterial 2012 book, Israel: A History. She noted that “Jewish history reserves a special place for Theodor Herzl, the father of the Zionist movement,” and that:

As much as one tries to explain certain historical phenomena, they retain an inexplicable, mysterious, mystical element. Herzl’s appearance in the Jewish world and his vigorous activity over less than a decade constituted one such phenomenon: a passing lightning storm that illuminated reality and shook it up, laying the groundwork for future changes. . . . Nothing in his personal history hinted at the mental fortitude, boundless energy, political acuity, and endless dedication he displayed in the last, amazing decade of his life.

One-hundred-and-twenty-five years after Herzl’s emergence, the mystery endures—to be appreciated even though (or perhaps precisely because) it cannot be solved.

The Mystery of the So-Called “New Moses” Endures
1. Essay

What Zionism Did for Herzl
3. Response

Why Herzl Succeeded Where Those Before Him Failed
4. Response

Herzl Was the New Jew