This is a response to Can a Renewed Alliance Between Israel and Turkey Stabilize the Middle East?, originally published in Mosaic in June 2022 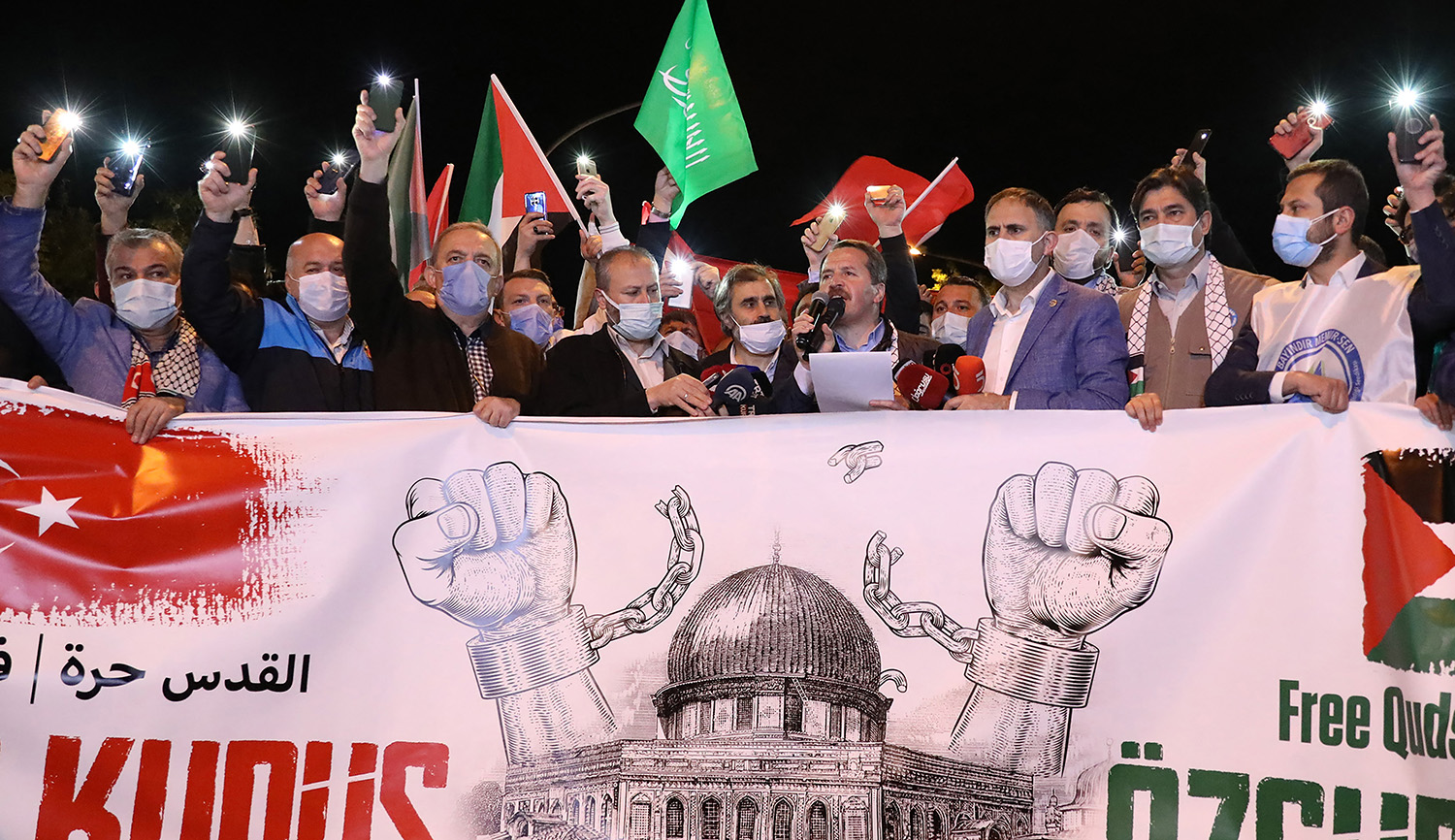 Protesters hold Palestinian and Turkish flags and chant slogans during a demonstration outside the Israeli consulate in Istanbul on May 10, 2021. ADEM ALTAN/AFP via Getty Images.

Let’s work backwards. There is no doubt that reconciliation with Turkey is desirable, at least from Israel’s perspective. The tensions with Turkey are unwanted across the security establishment. And normalization with Muslim states is broadly welcomed by the public. Turkey, for its part, is now also signaling that it wishes to reconcile after years of antagonizing the Jewish state and supporting its enemies. One might ask, however, whether Ankara’s intentions are pure. The effort to draw Israel near appears to stem from the presumption that Jewish power is the key to realigning with Washington. That’s not the ideal motivation. But rapprochement for any reason is probably preferable to open hostilities.

Regarding the second question, Yanarocak has done an admirable job examining the ways in which recent global crises and opportunities may impact decision-making in Ankara and Jerusalem. But the operative word is “may.” These are unknowns.

The key question, in my view, is the author’s first one: can Israel and Turkey restore their alliance? This is worth unpacking further.

I recently asked a senior Israeli diplomat what he believed would come of the recent efforts to reset relations. His answer was disheartening. He predicted that Turkey and Israel would at no time soon enjoy a warm peace akin to what Jerusalem now enjoys with the United Arab Emirates. Rather, he predicted that the relationship would look like the “cold peace” that has historically characterized ties between Israel and Egypt. As he then went on to clarify, he did not have in mind the current lukewarm relations with Abdel Fatah el-Sisi’s Egypt, but rather the cold peace of the 1980s to early 2000s, when Hosni Mubarak was in power and—despite robust security cooperation—anti-Israel sentiment was effectively state policy. Such is the profoundly hostile atmosphere that the Turkish strongman Recep Tayyip Erdoğan has carefully cultivated during his two-decade rule.

The Israeli military brass is no less pessimistic. Under no foreseeable circumstance will the IDF restore the defense ties of the 1990s, when it shared some of its coveted technology with the Turkish military. Trust has been thoroughly eroded by Ankara’s cooperation with the Muslim Brotherhood, al-Qaeda affiliate groups in Syria, and even Islamic State. Equally corrosive is the Erdoğan government’s permissive attitude toward the presence of Iran’s Islamic Revolutionary Guard Corps on its soil, as recently revealed by the narrowly thwarted plots against Israelis.

More troubling still, perhaps, is the Turkish government’s support for Hamas. The Islamist group’s political activists, fundraisers, and even terrorist operatives roam freely throughout the country with the blessing of Erdoğan, who has frequently hosted its most senior leaders and posed for pictures with them. Take, for instance, Saleh Arouri, a top Hamas military commander, who planned and financed the 2014 kidnapping and killing of three teenagers in the West Bank, thus sparking that year’s war in Gaza. Today, Arouri shuttles between Lebanon and Turkey, assembling Hamas rocket arsenals in Lebanon that are intended to draw the latter country into a two-front conflict with Israel at a later date. This was revealed in a letter to the UN submitted by the Israeli delegation in 2018.

Yes, the Turkish military has traditionally been a bastion of secularism to counter this kind of jihadist activity in Turkey. But that has simply ceased to be the case. Israel’s defense establishment no longer trusts its Turkish counterparts to fulfill their historic role of anti-Islamist bulwark after years of watching jihadists of all stripes, Sunni and Shiite alike, enjoy a warm welcome in the country. Retired Israeli military figures have said as much to me in off-the-record conversations.

These concerns date back at least to the failed coup of June 2016, which gave Erdoğan a pretext to purge the defense establishment of loyalists of the Pennsylvania-based religious scholar Fethullah Gulen. Erdoğan proceeded to gut the military and rebuild it to his liking. Formerly the strongest check on the president’s power, it is now a shell of what it once was, unable to safeguard the secular character of the Turkish state that had been the vision of the the founding father of the modern republic, Kamal Ataturk.

And the military is not the only institution that Erdoğan has gutted. The police, the judiciary, and the media are among the other pillars of Turkish society that he has slowly dismantled. The end result is a country under tight centralized control. For Israel, then, rapprochement is only as dependable as Erdoğan himself. And the Turkish strongman’s antagonistic foreign policy has been consistently colored by populism and Islamism, both of which traditionally feed on anti-Israel sentiment in the Muslim world.

Those who still hold out hope for Turkey’s future point to the elections slated to take place next year, which could theoretically topple Erdoğan. To be sure, there are liberal forces at work doing everything possible to bring that about. But at this point, with so many levers of control at his fingertips, pessimists (or perhaps realists) fear that Erdoğan will not allow that to happen.

Despite all of this, there are still those in Israel who suggest that the trade relationship alone justifies preserving the fiction of peace with Turkey. In 2020, Israeli exports to Turkey totaled some $1.5 billion, with Turkish exports to Israel exceeding $4.6 billion. Many Israelis enjoy vacations in nearby Turkey—a half million in 2019 alone. And many more like to transit the convenient Istanbul airport when flying to the Far East and Europe.

Yet after the recent revelations of Iranian operatives trying to kidnap Israelis in Turkey, Jerusalem is warning citizens not to travel there. Turkey, for its part, is already struggling with a burgeoning economic crisis, and can little afford to lose the influx of Israeli tourism dollars. It is also concerned that the news of Iranian terrorists roaming free in the country may deter other nationals from visiting. Sensitive to this, Israeli leaders—including President Isaac Herzog and Foreign Minister (and soon-to-be interim Prime Minister) Yair Lapid—have tried to work with the Turks to mitigate the damage, in a clear effort to keep rapprochement on track.

Whether these efforts are worthwhile remains to be seen. At best, reconciliation is a long-term investment—a bet on the future of Turkey, long after Erdoğan is gone. Until then, Israel can try to perpetuate the fiction of mending fences with a regime that is increasingly autocratic and consistently anti-Israel. Indeed, cold peace is an optimistic outcome for a government that still hosts a Hamas headquarters in the heart of Istanbul.

Will the government that follows be able to break meaningfully from Erdoğan’s corrupted institutions and disgraceful policies? That remains to be seen. But I am not sanguine.