Why So Many Israelis Dropped Their Opposition to Settlements

It has less to do with ideological conviction than the fact that settlers anchor the IDF in place. 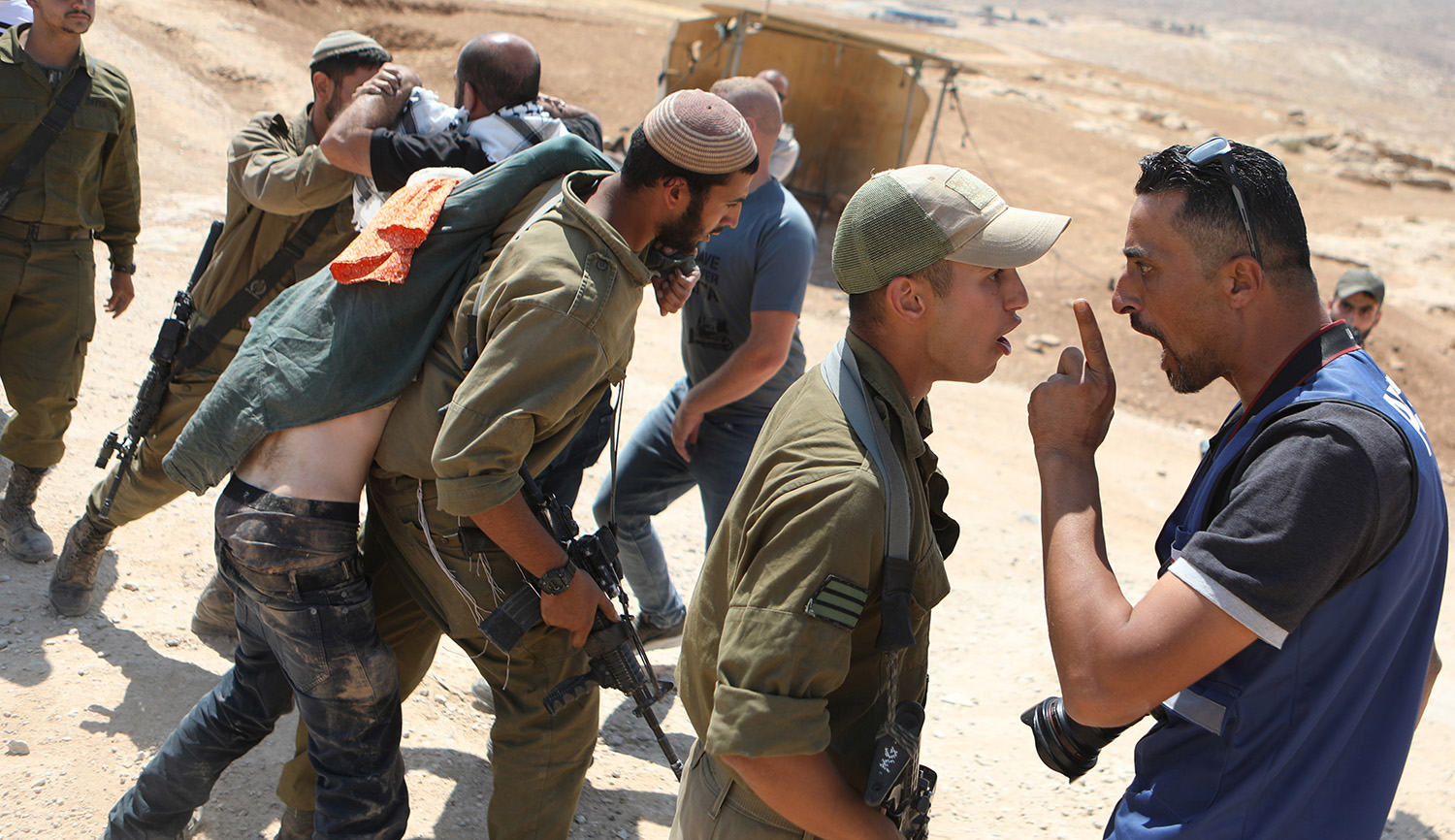 Palestinians and international activists clash with Israeli soldiers following a protest against Israeli military exercises in Masafer Yatta, south of the West Bank city of Hebron, on June 22, 2022. Mamoun Wazwaz/Xinhua via Getty Images.

Response
Evelyn Gordon
About the author

Kudos to Daniel Kane for thoroughly explaining a fact that too many people, especially overseas, ignore: the settlement movement is far from being monolithic. He does an excellent job of delineating the movement’s main subsets, though I think he overstates the influence of what he terms the Har Etzion branch. The settlement movement’s leaders and activists still largely come from the rival Mercaz HaRav branch of religious Zionism, which tends to be more ideological and less politically pragmatic; and in my experience, these leaders still consider it important “to build in every instance.”

But I’d like to focus instead on a more important issue, namely Kane’s assertion near the end of the essay that the settlement project has been “embraced by the Zionist mainstream.” Here, too, I think he overstates the case. Not only do settlements still have plenty of opponents, but much of their support stems from the specific circumstances of this historical moment rather than ideological conviction; consequently, it’s easily reversible. Nevertheless, he’s right that Israeli attitudes have changed in the three decades since the Oslo Accords were signed in 1993.

Partly, that’s because many more Israelis today can’t even remember a time when the settlements didn’t exist, making it easier for them to view settlements as a normal part of Israel’s landscape. Partly, it’s because the movement’s growth and diversification mean that many more Israelis now have family or friends in settlements; that’s especially true for the Ḥaredim, whose changing attitude toward the settlements is undoubtedly related to the fact that 150,000 Ḥaredim now live there, up from almost zero three decades ago. But above all, this “mainstreaming” happened for the exact same reason that the self-styled “peace camp” collapsed—massive upswings in Palestinian terror after both Oslo and the 2005 disengagement from the Gaza Strip altered Israelis’ perception of what their own security requires.

This evolving view was starkly reflected in a Pew Research report from 2016 showing that a plurality of Israeli Jews, 42 percent, deemed settlements beneficial to Israel’s security, compared to 30 percent who deemed them detrimental (25 percent said they made no difference). Yet as recently as the previous Pew report in 2013, a 35 percent plurality deemed them harmful while only 31 percent deemed them helpful. In other words, the spread had shifted from -4 to +12 in just three years. What makes this even more surprising is that the “harmful” position makes more intuitive sense. As a friend’s soldier son recently told me, many of his colleagues think protecting settlements and the roads settlers travel diverts resources from the army’s core West Bank mission of counterterrorism.

So what changed between 2013 and 2016? The survey for the 2016 report was actually conducted between October 2014 and May 2015, in the aftermath of the Hamas-Israel war of summer 2014. That 50-day war was one of the longest in Israel’s history, and for the first time, densely populated central Israel came under substantial Hamas rocket fire, which until then had mainly targeted the less populous south. Moreover, the military death toll was high—66 soldiers, bringing the total killed by fire from Gaza since Israel’s 2005 pullout to 99. By comparison, just thirteen soldiers were killed in the Israeli-controlled West Bank during those nine years. And in contrast to the tens of thousands of rockets launched at Israel from Gaza since 2005, not one has been launched from the West Bank, though Hamas’s West Bank branch is certainly no less desirous of doing so.

In other words, Israelis discovered that pulling out of Gaza had allowed Hamas to grow from a nuisance to a genuine threat to their own security. That solidified a consensus that had been building since the second intifada of 2000-2005: at least for the foreseeable future, the Israel Defense Forces must remain in the West Bank, because only the IDF can prevent that territory from becoming a far more dangerous version of Hamas-run Gaza. Understanding why this also translated into more support for settlements—not an obvious logical leap—requires a bit of history.

Under the Oslo Accords, no settlements were evacuated, but the IDF withdrew from some parts of the West Bank and Gaza and ceded security control over those areas to the Palestinian Authority. The result was an immediate upsurge in Palestinian terror—more Israelis were killed in the subsequent two and a half years than in the entire previous decade— eventually culminating in the second intifada, during which Palestinians killed more Israelis in four years than they had during the previous 53 years combined. Only after the IDF reentered PA territory in March 2002 did Israeli fatalities start falling (by roughly 50-percent a year). The army still enters Palestinian territory at will to this day; so far, no subsequent Israeli government has been willing to let the PA’s terrorist strongholds reconstitute themselves.

The intifada convinced most Israelis that peace with the Palestinians was currently impossible; subsequent rounds of failed negotiations in 2007-08, 2010, and 2013-14 reinforced this view. But in December 2003, Prime Minister Ariel Sharon proposed that Israel could improve its security even without a peace deal by unilaterally withdrawing not only all soldiers, but also all settlers from Gaza. Unlike the West Bank, whose long, porous border with Israel had made it the source of most of the second intifada’s deadly attacks in major Israeli cities, Gaza’s shorter, tightly fenced border made it easier to police from the outside. Moreover, most Israelis trusted Sharon on security; the former general was widely credited with Israel’s victories in both the second intifada and the 1973 Yom Kippur War. Consequently, polls at the time showed that a majority of Israelis supported this plan. And a majority initially deemed the 2005 pullout a success, so much so that, following Sharon’s stroke in January 2006, his successor Ehud Olmert won an election by promising to do the same in most of the West Bank.

Two cross-border abductions of Israeli soldiers a few months later—in June 2006 by Hamas in Gaza and July 2006 by Hizballah in Lebanon, from which Israel had unilaterally withdrawn in 2000—and an ensuing 34-day war with Hizballah soon soured Israelis on the idea of unilaterally leaving the West Bank. This wasn’t because their opinion of the Gaza pullout had changed; despite the abduction and the nearly 1,000 rockets launched at southern Israel from Gaza in the year since the disengagement, most Israelis still viewed the benefit of their sons and daughters no longer serving in Gaza as outweighing the costs imposed by Hamas. But the summer’s events had shown, once again, that the PA, which still controlled Gaza at that time, couldn’t or wouldn’t suppress terrorism from its territory in the IDF’s absence, and that made quitting the West Bank too dangerous. On top of its long, porous border, its close proximity to Israel’s biggest cities would enable even short-range rockets—the only kind Palestinians then had—to target major population centers as well as Israel’s main airport.

As a result, most Israelis lost all enthusiasm for evacuating settlements; why undergo the painful process of forcibly evicting thousands of fellow Israelis from their homes if it won’t lead to either peace or improved security? But it wasn’t until the 2014 war with Hamas that most Israelis grasped just how badly the Gaza pullout had exacerbated the threat to their own security, a conclusion reinforced by last year’s eleven-day war, when not only was Hamas able to fire more rockets at Tel Aviv in a single night than during the entire 50-day war in 2014, but Israeli Arabs joined in through violent riots in mixed Jewish-Arab cities.

This conclusion also made Israelis view one salient fact about previous pullouts in a new light—the fact that settlements make it harder to withdraw the IDF. In Lebanon, which had no settlements, the government withdrew the IDF practically overnight in 2000. In parts of the West Bank without settlements, the army swiftly pulled out following the Oslo Accords. Gaza’s 8,000 settlers (dispersed in 21 settlements) made the process more complicated, but far from impossible. Yet everyone understood that the West Bank’s hundreds of thousands of settlers posed a much bigger obstacle. True, every proposed peace plan assumed settlements closer to Israel would remain intact, but that still left tens of thousands of settlers deep in the West Bank who would have to be evicted.

In other words, the settlers are an anchor holding the IDF in place. Without them, any prime minister could easily break his campaign promises and pull the army out, just as Yitzḥak Rabin (who campaigned on “no negotiations with the PLO”) did in the 1990s and Sharon (who won by running against his opponent’s idea of leaving Gaza unilaterally) did in 2005. Thus if pullouts are good for Israel’s security, settlements are obviously detrimental to it. But if Israel’s security requires the IDF to remain in the West Bank, as most Israelis now believe, then settlements are beneficial in making sure that happens.

Does any of the above mean the settlers’ position in the mainstream is assured? Clearly not, given how contingent it is on the historical circumstances described above. First, while Kane rightly notes that the extremists remain a marginal fringe, their numbers are growing, and they receive huge (and hugely disproportionate) press coverage. Mainstream Israelis have little tolerance for random attacks on Palestinian civilians and none at all for attacks on IDF soldiers, so if the radical fringe ever ceased being a fringe, Israelis could turn against the settlement movement.

Second, it’s worth recalling that Israelis once considered Sinai as essential to their security as they do the West Bank today. Yet the Egyptian president Anwar Sadat’s dramatic visit to the Knesset in 1977 changed their views almost overnight, because it convinced them that he genuinely wanted peace. If Israelis ever became convinced that the Palestinians genuinely want peace, I suspect their attitudes would change similarly.

But the consistent experience of the past three decades shows the opposite—that far from wanting peace, Palestinians have exploited every Israeli territorial concession to kill more Israelis. By this point, it would take truly dramatic evidence to persuade most Israelis that they have changed. And until that happens, settlements will likely continue enjoying the mainstream’s support.

Why So Many Israelis Dropped Their Opposition to Settlements
1. Essay