Why religious-Zionist settlers describe themselves as “taking over for the kibbutznikim” or “finishing the work the secular Zionists started.” 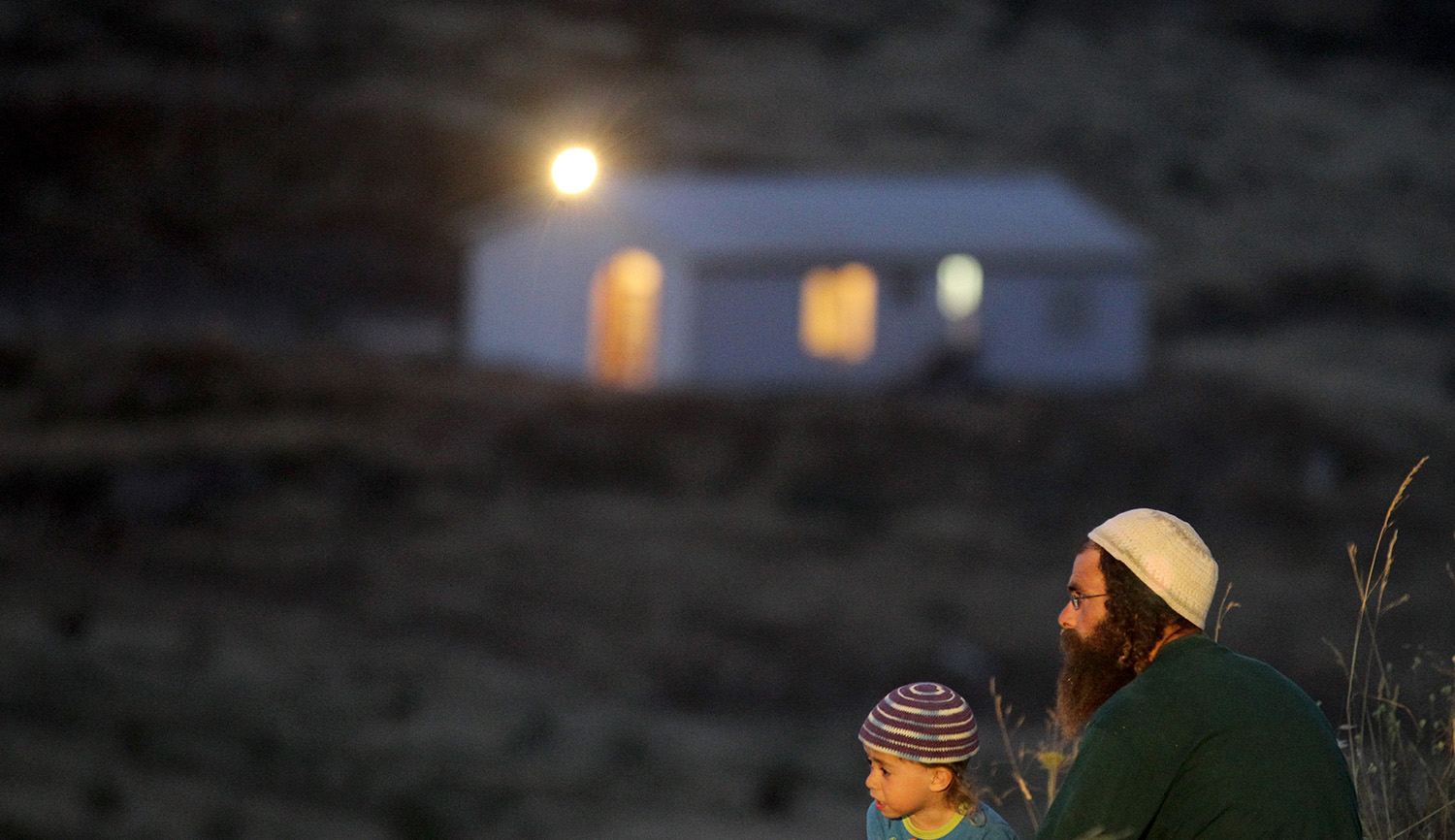 A religious father and his son sit near the Havat Gilad settlement on May 28, 2012. Nati Shohat/Flash90.
Last Word
Daniel Kane
About the author


Daniel Kane is associate director of curricular projects and a Krauthammer Fellow at the Tikvah Fund. He was formerly an assistant editor at National Affairs.

I’d like to begin by expressing my gratitude to Evelyn Gordon and Motti Inbari for their insights into the evolving status and character of the settlement project. In her fascinating explanation of shifting Israeli attitudes regarding the settlements, Gordon persuasively argues that growing public support should not be understood as representing a permanent resolution of the settlement question. Inbari, in turn, sheds scholarly light on the historic causes of the settlement movement’s ideological diversification and, even, fragmentation.

But because I have little more than gratitude to offer in response to these valuable observations, I’d like to use this opportunity to go beyond the strictly journalistic tone of my essay and offer a more speculative reflection on the legacy of the settlement movement.

Like so many American Jews, I grew up viewing Israel through the romanticized lens of early Labor Zionism. Both of my parents spent time on kibbutzim in college, and though Israel was already decades old when they lived there, I was raised on stories of communal living, agrarian labor, and military service. It was a conception of Israeli and Zionist identity that was reinforced by nearly every formative Jewish-American institution I passed through in my childhood—synagogue, Hebrew school, summer camp, and so on.

I mention this because, over the several months I spent traveling through the settlements and speaking to settlers, it was this idealized notion of pioneering Zionism that loomed large in my mind. Though the streets of Tel Aviv may be named after the original ḥalutsim (pioneers), it was only once I escaped the hustle and bustle of Israel’s center and crossed over the Green Line that I regularly encountered Israelis like those I had been taught about as a child. It was only there, in the settlements, that I found idealistic, close-knit communities organized around the principles of restoring, settling, and defending the land. This isn’t to say that such ideals don’t exist within other Israeli demographics, but in my experience, it is only among the settlers—specifically the religious Zionist settlers—that such Zionist idealism remains the dominant cultural force.

This shift in the Israeli culture writ large was recently explored in Mosaic by Eli Spitzer, who framed the change as the waning influence of the Zionist conception of the “New Jew”—the Zionist pioneer “whose soul and character would be purged of the disfigurement impressed upon the Diaspora Jew by millennia of exile.” Spitzer argued that, even as nationalism dominates Israeli politics, “Zionism has gradually become less a force for revolutionary disruption in Jewish history and more a vehicle for the renewal of the old Jew and . . .  the old Judaism.” I can think of no better characterization of the Israel I have encountered (and been surprised by) since making aliyah than the one provided by Spitzer.

Cautiously, therefore, I’d like to make the case that religious Zionist settlers are an important exception to Spitzer’s analysis, though, to be clear, I am here excluding the small minority of religious settlers who have abandoned Zionism and embraced militancy. Of course, insofar as early Zionist thinkers conceived of the New Jew as secular, the piety and traditionalism of religious Zionist settlers means that they cannot be New Jews in exactly the way the term was initially understood. On the other hand, there’s no denying the ways in which such settlers clearly embody some of the New Jew’s core characteristics: they are deeply committed to political Zionism and to expanding Jewish settlement; they celebrate self-sacrifice and military service; and, perhaps most importantly, they believe the state of Israel to possess tremendous and not yet fully realized transformative power.

This turns out not to be an accident. Religious Zionist settlers’ emulation of the New Jew appears entirely deliberate, or at least self-conscious. On a number of occasions, religious Zionist settlers I spoke to went as far as to describe themselves as “taking over for the kibbutznikim” or “finishing the work the secular Zionists started.” Not infrequently, these settlers also spoke to me of the explicit need for Jews to abandon their “exile mentality” when it came to everything from to their dovish politics to their understanding of Jewish religious texts.

Again, it must be emphasized that the religiosity of these settlers meaningfully distinguishes them from the New Jews imagined by earlier secular Zionist thinkers. Nevertheless, the culture and worldview of these religious Zionist settlers are in some sense undoubtedly new, and, crucially, consciously tied to the vision and rhetoric of early, secular Zionism. Making this amalgam all the stranger is that, as Spitzer points out, it took shape over the same period that the notion of a New Jew was gradually lost its hold over much of Israeli society. As a bizarre consequence, the religious Zionists of the settlement movement seem to have emerged as the de-facto heirs to those who hoped that an assertive and pioneering Zionism would allow the Jews to transcend their diasporic qualities and identities.

I chose to close on this note not merely because this strange reality is, in my eyes, among the most interesting and unexpected features of the religious settlement movement, but also because I believe it has bearing on the likely trajectory of the pro-settlement, religious Zionist camp. Whether you support their aims or not, there is something particularly powerful to Israelis in the religious settlers’ self-presentation as the legitimate inheritors of the Zionist project. It’s a persuasive claim both because of the obvious parallels that exist between them and earlier Zionist pioneers and because of the sacrifices that their assumed role requires—both in terms of their continued presence on dangerous land, as well as their visibly disproportionate representation in the IDF’s elite combat units. This dedication to Zionism, combined with the ideological idealism of their vision and their organizational savvy, makes the pro-settlement, religious Zionist movement an increasingly formidable cultural and political force.

To bring some objectivity to this assessment, I’ll conclude by citing Bar-Ilan scholars Moshe Hellinger, Isaac Hershowitz, and Bernard Susser who, in their 2018 history, Religious Zionism and the Settlement Project, provide an account of the religious Zionist camp’s growing influence:

This growing cultural and political clout is partially the result of internal population growth within the religious Zionist demographic, but the authors also point to the success of religious Zionism in drawing support from “beyond its sectorial borders.” In particular, they note that religious Zionism’s appeal seems to be growing among “[t]hose spoken of as ‘traditionalists,’ a certain cohort of Ḥaredim, and even an assemblage of secular Jews who identify with its nationalist, particularistic ideology.”

I can’t confidently speculate on what effect this ascendance of religious Zionism will have on Israeli politics and culture. But I will confidently make one recommendation: those looking to understand the likely impact that the religious Zionist movement will have on the future of the Jewish state should begin their study with the history of the initiative that gave it its current form: the settlement movement.

The Settler and the New Jew
1. Essay

Why So Many Israelis Dropped Their Opposition to Settlements
3. Response