In Argentina, France, and Elsewhere in Europe, Attacks on Jews Are Judged by a Separate Yardstick

“This odious bombing was aimed at striking Jews who were going to the synagogue, and it hit innocent French people.” 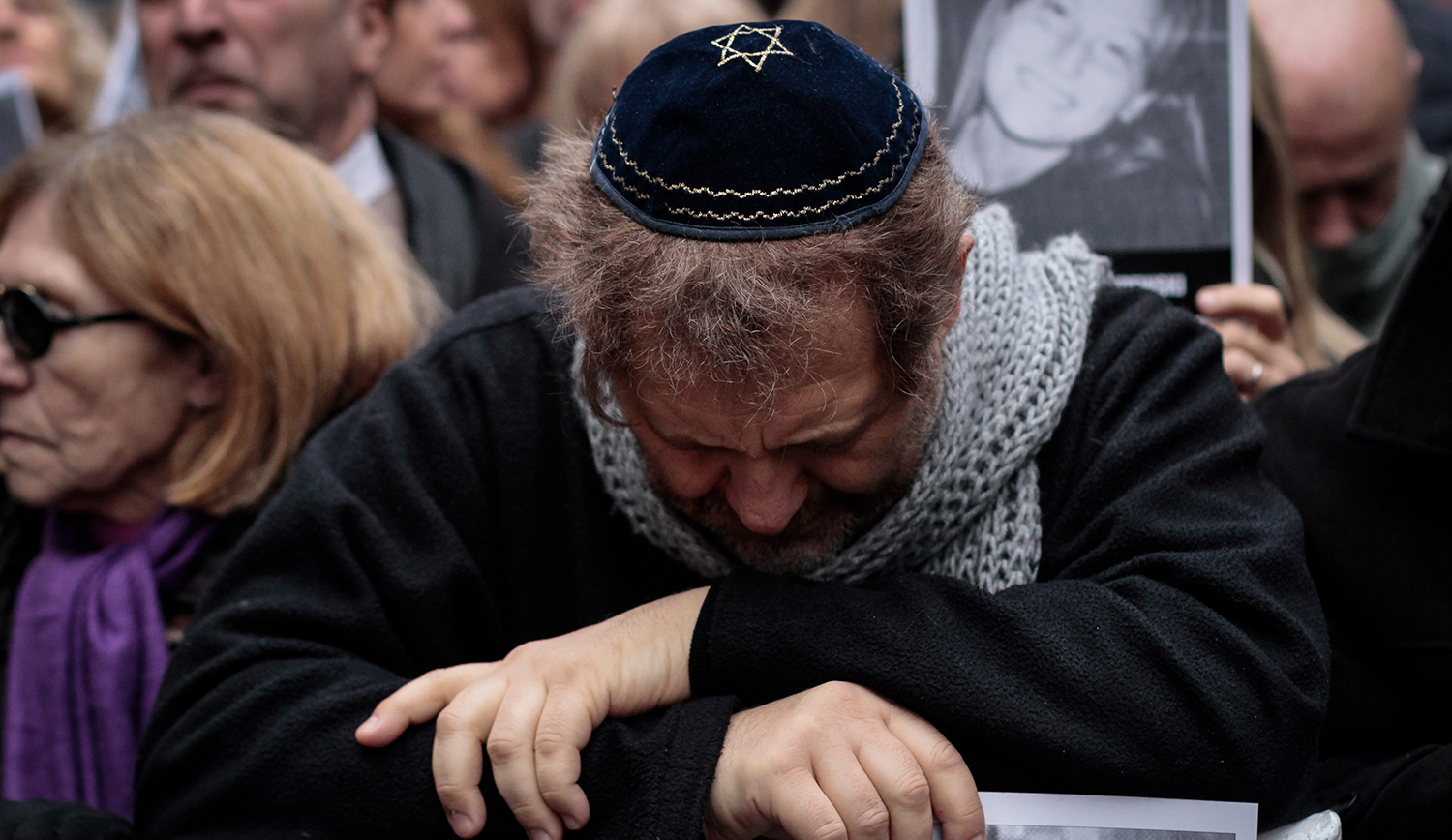 A man at an AMIA memorial in July 2019 in Buenos Aires, Argentina. Federico Rotter/NurPhoto via Getty Images.

Response
Ben Cohen
About the author

On June 5, 1959, after several years of patient work, the Nazi war-crimes investigators Simon Wiesenthal and Hermann Langbein finally persuaded West German authorities to issue an arrest warrant for Dr. Josef Mengele, the Nazi doctor infamous for his bestial medical experiments on Jews and others incarcerated in the Auschwitz death camp. Mengele had fled to Argentina a decade earlier and was living openly under his own name in Buenos Aires. In the interim, Wiesenthal and Langbein assembled enough witness statements to provide a clear account of Mengele’s wartime atrocities, and the West Germans duly launched extradition proceedings to return him from Argentina for trial.

But by the time Argentina approved his extradition on June 30, Mengele, having received ample warning from the Argentine authorities, was safely ensconced on a farm over the border in Paraguay. For Wiesenthal, who would gain his international reputation later on, the Mengele fiasco was proof positive of the “Argentine government’s utter disregard for justice.”

As both Avi Weiss and Matthew Levitt make clear—in, respectively, Weiss’s revealing memoir of the 1994 AMIA bombing and its aftermath and, in responding, Levitt’s sobering examination of the Iranian suspects who remain at large—Wiesenthal would have little reason today to revise his view of Argentine justice. The 25th anniversary of the AMIA atrocity has come and gone, but not a single person has been tried or convicted for a crime hatched and executed by the Iranian regime and its Hizballah proxy.

True, Argentina is not the primary culprit; that honor belongs firmly to Tehran. But for most of the quarter-century since the July 18, 1994 bombing, Argentina has been ruled by leaders, most notably Carlos Menem and Cristina Fernández de Kirchner, who did little or nothing to advance the goal of justice for the victims and their families and, implicitly or explicitly, may be said to have prevented or diverted it.

On those few occasions when there appeared cause for cautious optimism—such as the 2007 issuing of Interpol “Red Notices” for the Iranian and Hizballah suspects, or the definitive finding of a 2017 police inquiry that the death two years earlier of Alberto Nisman, the federal prosecutor pursuing the AMIA bombers. was the result of murder—subsequent events have invariably reversed any hint of progress. Today, Nisman is dead, the AMIA massacre remains unrevenged, and, to judge by her recent electoral fortunes, Kirchner, who as president initially, confidently, and falsely pronounced Nisman’s demise to be a suicide, may soon find herself back in power as Argentina’s vice-president.

One of the many painful questions to have arisen from Iran’s evidently successful effort to protect the AMIA bombers is this: did the fact that the AMIA building was chosen as a target because its occupants worked for a Jewish communal agency mean that this attack, like the bombing of the Israel embassy in Buenos Aires two years earlier, was in fact a national tragedy, that is, an offense against Argentina? Or was Argentina simply an unfortunate Latin American bystander caught in the crossfire of a Middle Eastern conflict?

Both the impressions of Avi Weiss and the findings of Matthew Levitt suggest the latter—and that, in fact, the singularly Jewish nature of the AMIA bombing played a part in enabling Argentinian politicians and officials to insert a degree of strategic daylight between themselves and this atrocity on Argentinean soil.

In this respect, moreover, the Argentinian episode is not unique. To consider another salient example, we need only turn to France. There, this summer marked another bleak anniversary of anti-Semitic terrorism that, in political terms, somehow presented the authorities with a less urgent need to pursue justice than has been the case with general instances of terrorism in France.

The anniversary in question was of the August 9, 1982 machine-gun attack by Palestinian terrorists during the lunchtime rush at Chez Jo Goldenberg, a popular kosher restaurant on the Rue des Rosiers in Paris. This deadly incident has acquired added significance because of the extraordinary revelations published this month by the news outlet Le Parisien.

In that 1982 attack, six people were murdered and more than twenty wounded. In the immediate aftermath, amid plumes of smoke, the terrorists disappeared into the crowds thronging the Marais, the old Jewish quarter of Paris. As with the planners of the AMIA bombing, the gunmen, who in this instance belonged to the radical Palestinian Abu Nidal organization, went on to evade capture, trial, and conviction for the long term. As recently as last year, a request by the French authorities for the extradition from Jordan of Nizar Tawfiq Mussa Hamada, one of the suspects, was refused by Jordan’s highest court on grounds that the kingdom’s extradition treaty with France had expired—which suggests, among other things, exactly how zealous French authorities had been over the past 37 years in pursuit of the Rue des Rosiers terrorists.

And now, thanks to Le Parisien, we have also learned something else: that, by his own admission to an investigating magistrate, Yves Bonnet, the former head of the French DST intelligence agency, had made a secret non-aggression pact with the terrorists in the weeks after the attack on the restaurant. “We made a kind of verbal deal in which I said, ‘I don’t want any more attacks on French soil and in return I’ll let you come to France and I guarantee nothing will happen to you,’” the paper quoted Bonnet as having said.

Even more alarmingly, Bonnet also disclosed that this pact was known to a number of leading French officials, among them the chief of staff to François Mitterrand, then the president of France. The parallels here with the AMIA situation are striking, one of them being the equivalent pact concluded in 2013 between Iran and the Argentinian government led by Cristina Kirchner; that agreement effectively ruled out the prospect of the bombers ever seeing the inside of a courtroom.

Is it possible to imagine such an agreement being struck by France if the terrorists had instead attacked the restaurant at the Hotel George V in Paris, or by Argentina if the targeted building had housed the country’s Interior Ministry?

And of course terrorists and their sponsors are also less likely to choose such targets. They have long understood that attacks on Jewish communities are judged by a different yardstick, are more “understandable,” and need to be relegated to the category of regrettable intrusions into third-party countries by Middle Eastern politics, further complicated in each such country by the problematic affiliation of Diaspora Jews with the state of Israel.

Indeed, a good two years before the Rue des Rosiers attack, following another terrorist outrage against a Jewish institution in Paris, Raymond Barre, then prime minister, acknowledged this reality. On October 3, 1980, a powerful bomb exploded near the entrance of the Reform synagogue on the Rue Copernic, wounding nearly 50 people and killing four: specifically, three Frenchmen and a young woman who turned out to be an Israeli tourist.

Interviewed on French television after the attack, which was blamed on far-right extremists but was more probably the work of Palestinians, Barre committed what those of a more generous disposition might describe as an unfortunate slip of the tongue. “This odious bombing,” he said, “was aimed at striking Jews who were going to the synagogue, and it hit innocent French people who were crossing the Rue Copernic.”

However distasteful, Barre’s remark was inadvertently enlightening. When Jews are in the crosshairs, an act of terrorism that might otherwise generate appalled outrage and swift police work could be rationalized if not excused. Some such thinking has left an indelible mark on governmental, judicial, and law-enforcement responses to anti-Semitic terror both in France and elsewhere in Europe. If it can be boiled down to a single principle, it is this: when it comes to the victims of Islamist-inspired terrorism, Diaspora Jews are innocent, but not as innocent as others.

Today, as then, terrorists can (and do) make the same calculation. Over the last decade in France, eight Jews have been killed by Islamist terrorists, three of them small children gunned down at a Jewish school in Toulouse in 2012. This has occurred amidst an atmosphere of rising anti-Semitism in the country and, with it, a broader tolerance of extreme violence directed at Jews.

Of course, terrorists have struck at many more general targets in France during the same time period, but these are seen by politicians and the media unambiguously as attacks on France itself, and not “merely” as attacks on Jews who happen to be living in France. This practical distinction between Jew and non-Jew, which has licensed bloodshed in the past, will no doubt do so again.

In Argentina, France, and Elsewhere in Europe, Attacks on Jews Are Judged by a Separate Yardstick
1. Essay

The Men Responsible for the AMIA Bombing Are Known—and Still at Large
4. Response

In the AMIA Case There Was an Unconscionable Miscarriage of Justice, But No Cover-Up
5. Last Word